Villagers develop a protective ring around the Ranthambore tiger reserve

“A tiger was here…and it was not very long ago,” exclaimed Dharm Singh Gurjar looking at pugmarks on the ground, just a kilometre away from village Khohara, on the outskirts of Ranthambore tiger reserve in Rajasthan. He observed a few more pugmarks to gauge the direction the tiger must have taken and immediately clicked a picture with his phone. He then shared it with Dharmendra Khandal of Tiger Watch, a non-governmental organisation working on the issue of wildlife protection and welfare.

Gurjar is among the 50 people, living around the Ranthambore tiger reserve, who have been trained by Khandal and his team at Tiger Watch. These 50 people are part of Tiger Watch’s Village Wildlife Volunteers programme.

Under this programme, Khandal, over the years, has brought together a group, mostly belonging to the Van Gujjar community, who are nomadic buffalo-herders. This group, which now stands at 50 people, acts as the eyes and ears of the forest department by monitoring and reporting tiger movement in and around Ranthambore. They have set up about 50 camera traps on the periphery of the tiger reserve to monitor the movement of tigers going in and out of the reserve. This monitoring is key as the reserve, being small in size, witnesses a lot of tigers moving outside towards human-dominated areas and sometimes killing livestock.

“These volunteers have become a kind of protective ring around the tiger reserve. They set camera traps in and around the reserve to monitor the tiger movement and thus provide invaluable information to the forest department. They have helped in controlling poaching as they have a very strong information network. They also help villagers in getting compensation for cattle killed by tigers and thus they prevent incidents of revenge killing as well,” explained Khandal to Mongabay-India.

The Village Wildlife Volunteers programme was started in 2013 to involve the community in the conservation process, according to Khandal.

“We give a monthly stipend to the volunteers and that adds to their income. They work for the protection of the tiger reserve as well as bring forth the problems of the villagers. For instance, we tried to streamline their issues regarding compensation for the cattle killed by wildlife. The reason behind involving villagers was that people would listen when they know that someone from amongst them is involved,” said Khandal.

He revealed that due to the efforts of the volunteers and the information provided by them, in the past few years, the authorities have caught about 40 poachers.

“But one important fact, which often receives less attention, is that they have taught us a lot about wildlife in the area and provided information which no one had. For instance, we discovered a breeding population of about 30 gharials, a critically endangered animal, in a river near Ranthambore because of them. They even assist researchers in fieldwork. They have their own network of villagers and thus they have created a larger decentralised group making more people involved in the conservation process,” informed Khandal.

He informed that Tiger Watch often hosts informal social events, where they invite these volunteers and their network of villagers, to keep them involved and give them a sense of belonging.

“These people educate us about things that we had never imagined. For example, we came to know that Kailadevi wildlife sanctuary, which is part of the tiger reserve, is one of the best and safest wolf habitats of India. They give us invaluable information about the behaviour and movement of wild animals. No wildlife conservation can take place without involving the local communities and these people prove it,” said Khandal, who is a conservation biologist.

Gurjar had joined the programme after he had finished his graduation. “Dharmendra sir told us about the need and importance of protecting wildlife and forests. It was the first time that someone had spoken to us about this. I did some camera trapping work too as part of the programme,” said Gurjar.

Apart from funding by Tiger Watch, the Village Wildlife Volunteers programme is financially supported by some of the hotel owners in the Ranthambore area. “This programme is unique in that sense because it involves NGO, the community at large, the forest department and local businesses. It is truly a programme that is run by all the stakeholders in the area,” said Khandal.

Read more: A tiger on my land

Small but precious: small forest patches act as islands and corridors of biodiversity

Local hunting community too brought into the fold

Khandal further informed that there is a hunting community in the Ranthambore area and over the years they have brought in the programme too.

“The Mogyas are a specialised traditional hunting tribe. They are small in number but their impact (from hunting) is huge. Their economic condition is very bad. Once when we were in the forest we met a family of Mogyas and found that they were only able to have their first meal of the day in the afternoon when the man came back after doing some work. People who are hungry for bare necessities can’t be taught conservation. So, what we have done is to tackle their issues one by one. For instance, we started healthcare programmes for them and involved the women of that community in handicraft work to ensure a steady income,” said Khandal.

Tiger Watch has now opened a small hostel for around 40 children of the Mogya community where the children are staying and are given a formal education. “These children are studying in different schools and pursuing their interests like painting and music. We are trying to find whatever opportunities we can for these families to ensure livelihood,” he said.

On a query as to what’s next after the Village Wildlife Volunteers programme, Khandal said they want to take the model to other parts of Rajasthan. “But we won’t run those programmes. We will only share our experience and support individuals or organisations intending to run similar programmes. A start has already been made by an individual in the villages inside the Desert National Park in Jaisalmer,” said Khandal. 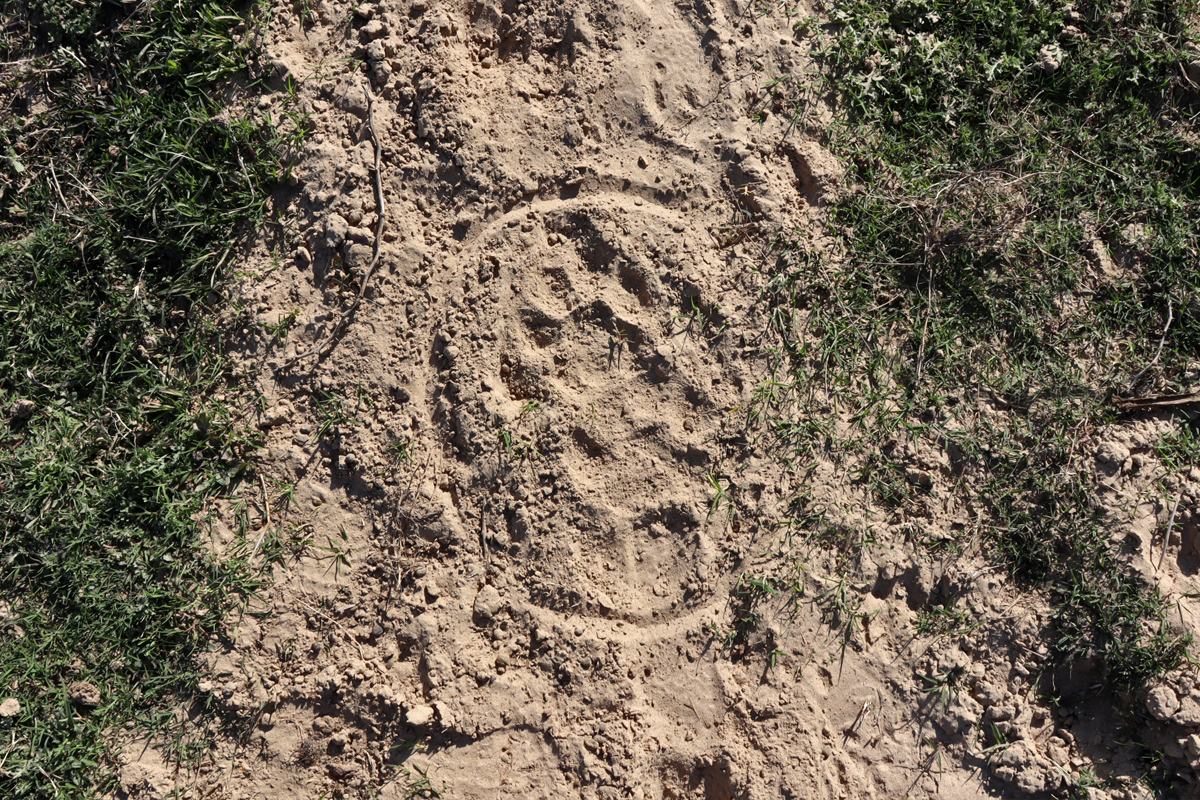 A tiger’s pugmark in a village bordering the Ranthambore tiger reserve. Photo by Mayank Aggarwal/Mongabay.