A thick, orange-yellow bill with a slightly longer lower mandible (jaw) is one of the most striking features of the Indian skimmer (Rynchops albicollis). This bird with pointed black wings and white underparts, a unique beak, and bright orange feet, features on many a birder’s wish list. Its population though is declining, primarily due to the degradation of wetland and riverine habitats. In an upcoming initiative, currently on hold due to the COVID-19 pandemic, researchers, forest departments and local residents have come together to implement a community conservation programme at nesting sites of the Indian skimmer in Odisha, Madhya Pradesh, Uttar Pradesh, and Rajasthan.

Once distributed across the Indian Subcontinent, Indian skimmers are mainly found along large rivers in India, Bangladesh, Pakistan, and Nepal. The species is listed under the Vulnerable category in the IUCN Red List with an estimated global population of 4000–6700 mature individuals. In the recent State of India’s Birds 2020 report, Indian skimmers are one of the 101 species categorised as ‘Of High Conservation Concern’ in the country and a key species in 6 Indian States. Despite their dwindling numbers and importance in the ecosystem, they are one of the least studied species in the Indian subcontinent.

The Indian skimmer often flies low over water bodies with its scissor-like beak open. It gets its name from this skimming behaviour. As the bird flies, it feels for the prey with its lower mandible that cuts through the water surface. Finally, with a dip of the head, it scoops the prey ─ mainly fish, insect larvae, and crustaceans like shrimps.

These birds are found on low-land rivers, lakes, and marshes as well as coasts and estuaries. They are social species, often seen resting in flocks on the beach, sandbars and islands. In India, records of nesting colonies exist on the rivers, Chambal, Mahanadi, Ganga, Son, and Beas. They usually breed in the summer (March to June) when the water level in the rivers, goes down. Consequently, sandbars emerge and when these mid-river sandy islands are exposed enough, skimmers start nesting on them.

Subrat Debata, of Aranya Foundation that works for protection and conservation of Odisha’s biodiversity, has been studying their breeding ecology since 2017. “Indian skimmers are habitat specialists”, said Debata. They play a crucial role in maintaining the ecological balance of the riverine ecosystem. During his study, Debata and a team of researchers observed Indian skimmers sharing their nesting colonies with black-bellied terns, river terns, little terns, river lapwings, and little pratincoles. “As this species breeds colonially, many other species get benefitted. We have also seen many avian, mammalian and reptilian predators get benefitted as they feast on eggs and chicks seasonally”, he added.

Parveen Shaikh, a research biologist from Bombay Natural History Society, has been researching the population status and breeding ecology of Indian Skimmers in the National Chambal Sanctuary, which is situated at the convergence of Madhya Pradesh, Rajasthan and Uttar Pradesh. Shaikh started her journey in 2016 when relatively little was known about the species and in about two years, they were able to identify all the nesting islands in the sanctuary, assess their status and threat. In 2018-19, approximately 225-260 breeding pairs of skimmers were observed along river Chambal.

Shaikh and her team also marked the adults and chicks with metal rings and coloured flags, for understanding their movement. “We observed that after breeding, as monsoons begin, the birds leave along with the juveniles. We wanted to understand whether these birds have site fidelity to their nesting grounds” she explained. Site fidelity is the tendency to stay or habitually return to the same nesting area. “More than 15% marked birds returned to the same island where they nested previously” she added. This shows the importance of conserving these nesting-islands, as loss of breeding habitat can make these species vulnerable to population decline.

Indian skimmer nesting areas are under threat from other natural predators as well as anthropogenic activities. Natural predators of skimmer eggs and chicks include birds like house crows, grey herons, brown-headed gulls, black kite, and reptiles like Indian monitor lizards. Moreover, water pollution due to agricultural and industrial chemicals affects the skimmers that depend on the rivers for food. The movement of fishing boats also causes disturbance and activities like sand mining might have long-term effects on nesting-island formation, explain researchers.

In 2018, the state Government of Odisha announced a plan to construct about seven more barrages on the river Mahanadi. “If this happens it may greatly affect the water flow and island formation, leading to loss of suitable nesting sites for this globally threatened species”, fears Debata.

Whether it is flooding or reduction in water flow, fluctuating water level is one of the major factors that affect the breeding success of the species. In the past couple of decades, the Chambal river and nearby areas have been subjected to numerous developmental projects to meet its infrastructure needs and freshwater demands. Upstream damming and existing lift irrigation plants throughout the Chambal river, has already reduced the water flow.

When the water level is too low, the sandbars get connected with riverbanks. This results in nest predation by dogs, trampling by grazing cattle, accidental trampling by people and in Odisha, there are reports of egg collection for consumption. 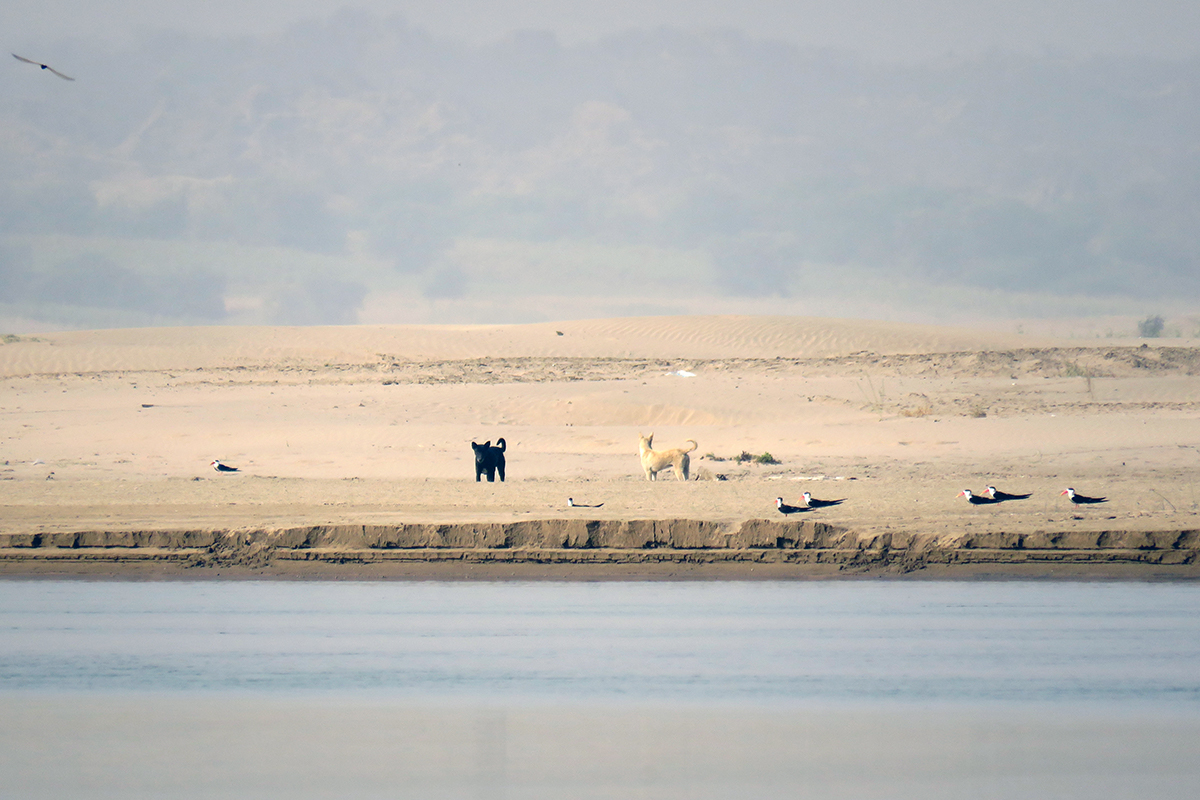 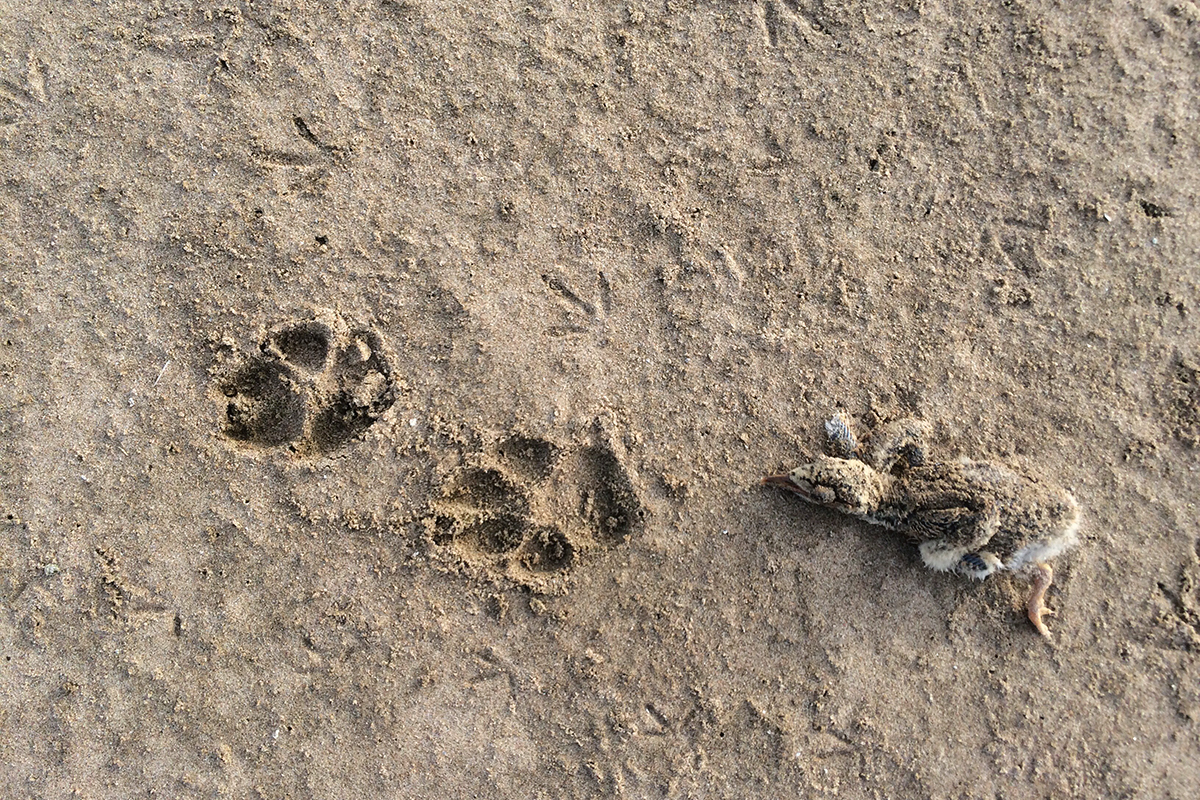 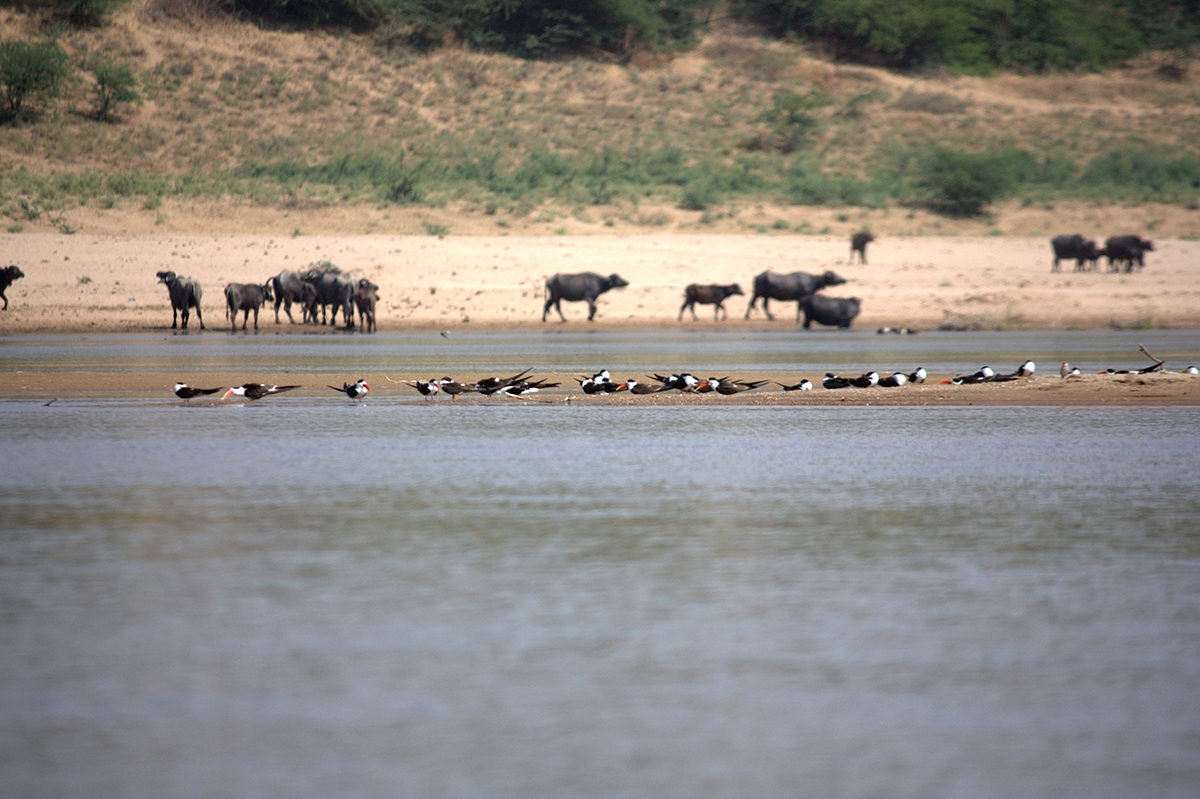 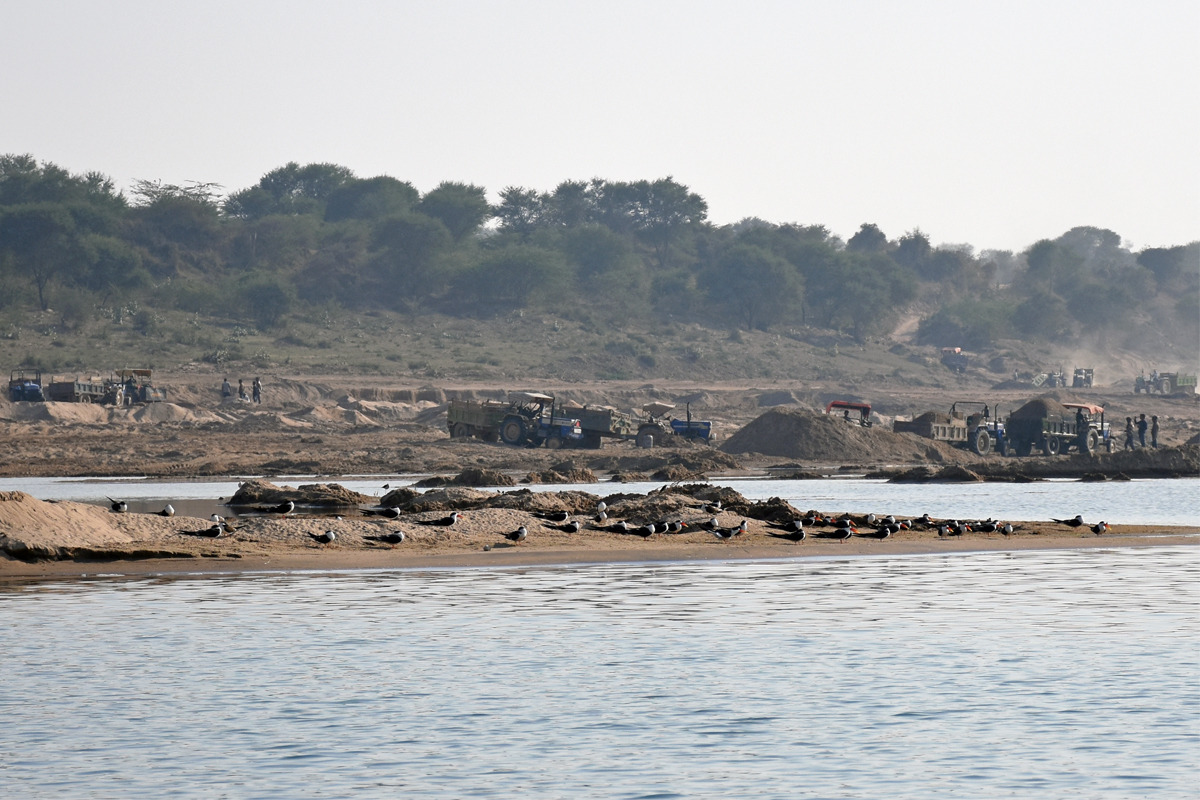 To protect Indian skimmer nests, Debata and Shaikh have implemented community-based conservation with the support of State Forest Departments of Odisha; and Madhya Pradesh, Uttar Pradesh, and Rajasthan, respectively.

“We are currently focused on keeping the nesting sites safe from unintentional human activities and movement of stray dogs and livestock,” said Debata. They have involved local Irrigation Department authorities to control the river water and avoid nest flooding. They have also appointed four youths from the nearby villages as nest guardians.

Appointing nest guardians can also have a positive impact on birds that share nesting-grounds with the skimmers and other animals like gharials and muggers that share its habitat, note the researchers. Shaikh’s team engaged the community in guarding a nesting colony in 2019 as a trial run. They planned to initiate the Nest Guardian Programme at 5 nesting colonies in 2020. She explained, “Three to four guardians from the nearest villages would be trained to identify the nest and for basic nest monitoring. The guardians and a fence around shallower part of the island would keep dogs and cattle away from nesting sites”.

For now, Debata and Shaikh’s work on the field is on hold following the nationwide lockdown due to COVID-19. As the nesting season slowly draws to a close, they wait to resume fieldwork in hopes of checking up on their beloved birds.