by Siddhartha Krishnan on 5 November 2020

As COVID-19 surged in the sweltering plains, Ooty, the headquarters of the Nilgiris district, had a safe summer. Infection numbers and rates were under control. Locked-down at my parents in Ooty, my occasional town visits were to buy a fortnight’s supply. Monsoons curtailed these excursions. This was my longest and wettest work from home phase. Given the pandemic’s disproportionate assault on the poor, a privileged one.

Our home has a small lawn in front, and a bigger backyard.  Come rain, or that little bit of shine, I spent much of my offline time wandering about in a leaf-littered and slushy backyard with my camera. Particularly in a small pear and walnut orchard. Otherwise sparse looking in summer and winter, this monsoon, our backyard orchard was a creepy, knobbly and prickly bounty.  My mother, a retired pediatrician, does prefer her garden a tad ‘wild’ and lush. But the chayote (commonly called chow chow) she planted five years ago, outgrew her garden aesthetic.

Curried, fried, pickled or sautéed, chayote, or chow, became a family dietary staple. The occasional masked visitor bade bye with a bagful. Chayote is by itself charitable in nutrition, as we shall see. But it has a charity in imagery. The way it grows, grows on a photographer. You keep coming back to frame it in its lumpy or thorny whole, or in its spindly and tendril-y parts. At different times of the day; under different light conditions. 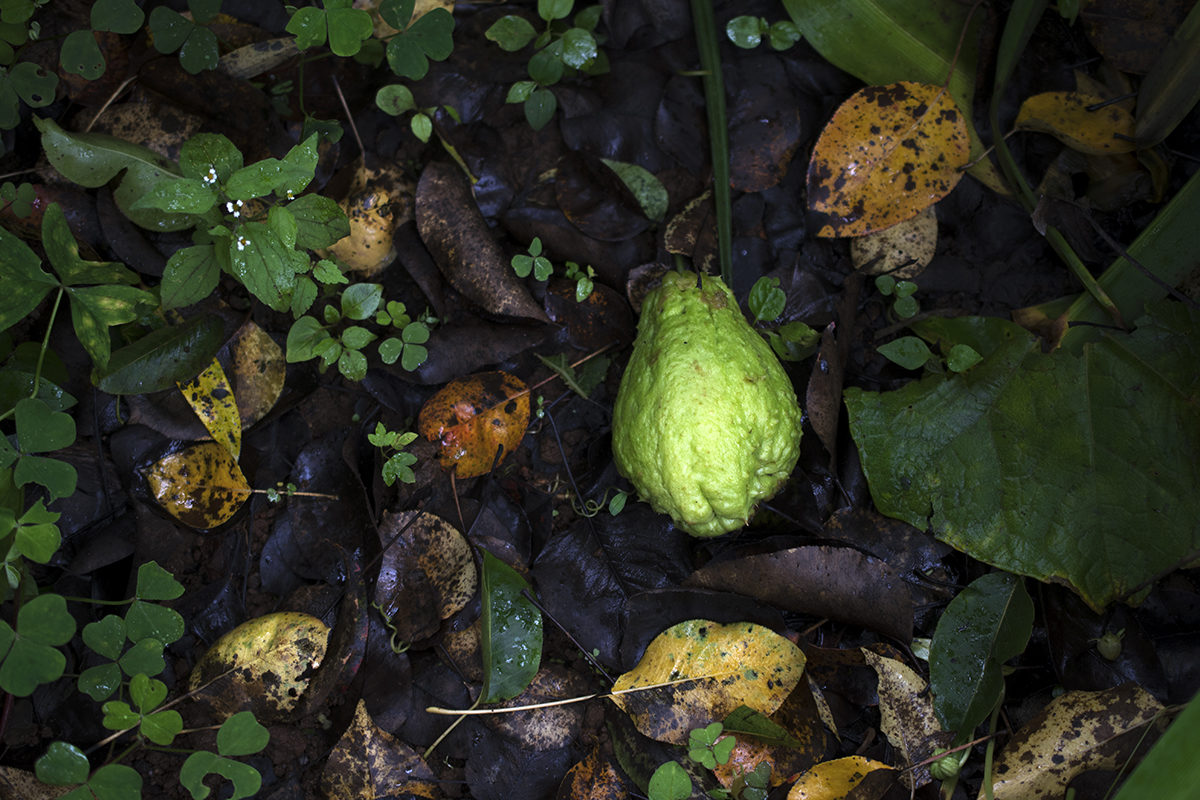 Studies claim that chayote can grow between 900 to 1370 MSL (meters above sea level). But Ooty is 2240 MSL. Climate change could explain chayote’s ability to grow at higher elevations. Photo by Siddhartha Krishnan.

A pollinator dependent crop, Chayote belongs to the Cucurbitaceae or gourd family. Some other family members include pumpkin, bottle gourd, zucchini and squash. As part of the Columbian exchange, gourds were a plant transferred from the New World – Americas- to the Old World – Africa, Europe and Asia. In India it goes by various names including Chow Chow, squash, and Bangalore Brinjal.

Studies from the Western Ghats claim that Chow can grow between 900 to 1370 MSL (meters above sea level). But Ooty is 2240 MSL. Climate change could explain Chow’s ability to grow at higher elevations.

Chayote can become chutney, be sautéed, cooked as sambar, or added to meat.  This gourd has not been gentrified yet. Prices hover between 15-25 a kilogram. Its ‘sprawling habit’ lends a ‘wild’ feel to your garden.

Two chayote varieties grew, one plain and the other prickly. The plain knobbly one’s luminosity made it a tough photo subject. As if excess light leftover from photosynthesis radiated so much green,  that the photographer has no option but to play up this quality. ‘What you cannot hide, you highlight’ is an architectural hack; it became my photo hack. The prickly one though, hung heavy and thorny. Underneath was a darker jacket, and the occasional sunshine high ‘lit’ the thorns. As if light spiked all over from a shadowy surface. A more attractive ‘low-key’ subject.

Birds preferred their pears. They wouldn’t peck on the chow, even the non-prickly ones. The prickly chow is interesting. Though Google throws up results for thorny, prickly and spiny chayote, ‘prickly’ seems a more appropriate word. If the pointy projection is from the skin, it is a prickle. The classical, but now contested, hypothesis is that prickles, along with thorns and spines on plants are an evolutionary response to herbivory, whether the bird types in our backyard, or cows, deer, and beetles. Sharp objects on plants are a physical, as against chemical, defense mechanism.

Covid-19 has made immunity this century’s most common, necessary and profitable word. Chayote’s nutritional profile includes good stores of vitamins C and B9 (folate) besides a suit of other vitamins; and minerals like potassium and calcium. It’s polyphenol content signals antioxidant properties.

Chayote’s generosity is allopathic, and aesthetic. Consider the tendrils. Gratifying plant portraiture subjects. There is linguistic and sensory intrigue at play here. Essentially, turning and curving movements. If in photography ‘curvature’ is an aberration of a flat plain appearing curved, in botany, curvature is about adaptation. To monsoonal rain and wind in Ooty, for instance.

Tendrils turned, twisted and curled. Around plants, branches and objects nearby. In the air; on their way nowhere. They even coiled around their own stems, and sometimes into each other. They would reach out. English reached out to Greek in explaining this tropism. ‘Thigmatropism’ (thigma or ‘touch’ in Greek) is the sensory response to touch. Chayote, and other creepers like peas, can feel objects and coil around them.

An environmental sociologist and environmental historian, the author is Convenor, Academy for Conservation Science and Sustainability Studies, ATREE, Bengaluru.

Banner image: A thorny variety of chow hanging in a backyard. Photo by Siddhartha Krishnan.