Perils of the Phayre’s leaf monkey

by Shatabdi Chakrabarti on 8 February 2021

Phayre’s leaf monkey (Trachypithecus phayrei), an endangered goggle-eyed primate species once widely distributed across many forests in northeast India, is now confined to small fragmented patches in the states of Assam, Mizoram, and Tripura in the region.

Tripura’s Sepahijala Wildlife Sanctuary is one of the few places where these monkeys can be spotted. But the monkeys, that feast on leaves of a wide variety of plant leaves (folivores), have developed an affinity for rubber in the mushrooming commercial plantations in and around the protected area.

In Bangladesh, which abuts Tripura, and is home to the species, the monkeys have taken a liking to the non-native invasive Acacia plants. The species (T. phayrei) is one of the most widely distributed of the broader group or genus (Trachypithecus) but one of the least studied in ecology, behaviour, genetics, and systematics. Experts are concerned about the nutritional implications of the animals’ altering feeding patterns.

“The species is adapting to life in rubber plantations in Tripura. There is a high dependence on rubber leaves,” confirmed primatologist Joydeep Bose. In a study, Bose and Bhattacharjee (2004) reported that plants like Hevea brasiliensis (67.4 percent), Delonix regia (5.8 percent), and Acacia auriculiformis (4.3 percent) make up more than 75 percent of the annual diet of the species in Tripura; their diet includes twigs and leaves of the rubber tree.

Tripura is the second-largest producer of natural rubber (Hevea brasiliensis) in India after Kerala, as per area under cultivation and quantity of produce. This commercial monoculture product’s lucrative nature has led to large parts of the state being converted into plantations. Sepahijala district has one of the highest shares of the area under rubber in the state, and the livelihood of most people is based on agriculture and rubber.

Bose mentioned that the only place where he could observe the monkeys all day was in plantations and some tea gardens where the troops seemed to have adapted to human presence. Everywhere else, it was next to impossible to follow or track these monkeys; they would disappear into the canopies at first glance of humans.

In Tripura and Assam, where troops exist in human-dominated areas, the monkeys raid kitchen gardens to feed on jackfruit, drumsticks, and other vegetables. The troops travel from one village to the other looking for food during the season when the forest isn’t providing them with enough new leaves or fruits and flowers to feed on, said Assam-based wildlife biologist Parthankar Choudhury. But it is the tall canopies of the forests that they return to for night roosting.

In a 2017 paper, Conservation concern to the primates outside protected areas: A study from Hailakandi, Assam, India, Choudhury, and co-author Amir Sohail Choudhury marked the Phayre’s monkeys in Hailakandi as “uncommon” in occurrence in comparison to the prominently occurring Rhesus macaque and capped langur. They suspect that the Phayre’s leaf monkeys (called chosma bandor in local dialect) were difficult to see due to their shy nature. However, locals were familiar with them, and a small troop of three to four individuals frequently visited a study village.

These monkeys are easily identified in the field by the distinct white patches around their mouths and eyes, making them look as if they are wearing spectacles- hence the common name ‘spectacled’ leaf monkey.  They are named after Sir Arthur Purves Phayre, a British Indian Army officer who ‘discovered’ the species.

The species occurs in eastern Bangladesh, southwestern China, parts of southeast Asia, and northeast India. According to IUCN, Phayre’s monkey is listed as Endangered as it is suspected to have undergone a decline of more than 50 percent over the last three generations (36 years, given a generation length of 12 years), due to a combination of habitat loss and hunting. In India, it is a schedule 1 species under the Wildlife Protection Act, 1972.

Myanmar’s Phayre’s langur monkey population has now been identified as a completely different species and has been named Popa langur, marked as critically endangered. Bangladesh scientist Tanvir Ahmed, who was part of the international team of more than 30 researchers who decoded the evolutionary history of the Trachypithecus genus, said that since the taxonomic revision, what was earlier thought to be the distribution range of the Phayre’s langur, has now been reduced.

“This means that the overall population is also lower than what was thought to be before the taxonomic revision,” Ahmed told Mongabay-India. In Bangladesh, a 1982 population study showed approximately 1300 individuals in the North Sylhet Division. Tanvir Ahmed’s census of the species in the same geographical range in 2018-19, showed the total number to be approximately only 376 individuals with a very low number of mature adult monkeys.

This stark difference in population numbers in just over three generations shows that there is a steep and rapid loss in their numbers in the wild, Ahmed noted. In Bangladesh, Ahmed has observed troops of Phayre’s langur monkeys feeding on Acacia plants. This invasive, non-native species may not provide enough nutritional value to the monkeys and they may be forced to feed on them as their habitat shrinks and natural food sources are reduced, he said.

In Tripura, wherever rubber plantations sprang up, the monkeys made it part of their diet and adapted. But in other places without the plantations, they would carry on with their regular diet of the plant species, observed Joydeep Bose. Rubber plantations started in Tripura in the late 60s, and Sepahijhala was declared a sanctuary in the 80s. So the species had already adapted to rubber over the years. Jhum cultivation with reduced fallow age outside protected area is blamed for habitat degradation. A 2014 study in Sepahijhala concluded that seven troops, comprising 95 individuals, were present in the sanctuary.

“Because of their ability to digest the leaves and fruits of such a large variety of plant species, these monkeys also play an important role in the health of the forest and in seed dispersal. But due to habitat loss and land degradation, the food ecology of the monkeys has been affected,” Bose said.

As per the 2015 and 2017 reports of the Forest Survey of India, the total forest and tree cover of the state was 8,044 square kilometres and 7,726 square kilometres, respectively. The 2017 State of Forest Report of Tripura concluded that a total decrease of 164 square kilometres in the state’s forest cover could be attributed to developmental activities, harvesting of mature rubber trees, and shifting agricultural practices. However, the report also suggests that a positive change has been seen due to the extension of the area under rubber plantations in some cases.

The monkeys are spending more and more time in these plantations and are now a common sight in and around the villages fringing the sanctuary. It is not very difficult to walk into the sanctuary from one of the surrounding villages. With a porous boundary and human habitation all around, it is quite easy to get access without entering the park from the main gate. Many local community members residing in the villages work in the rubber plantations and walk in and out easily from the sanctuary.

According to a field guide who has been tracking this species in Sepahijala, there has been an increase in the frequency of sightings within the plantations and the villages. But, there has also been a decrease in the numbers, especially in the past decade as more and more forests are being cut down to make way for plantations. 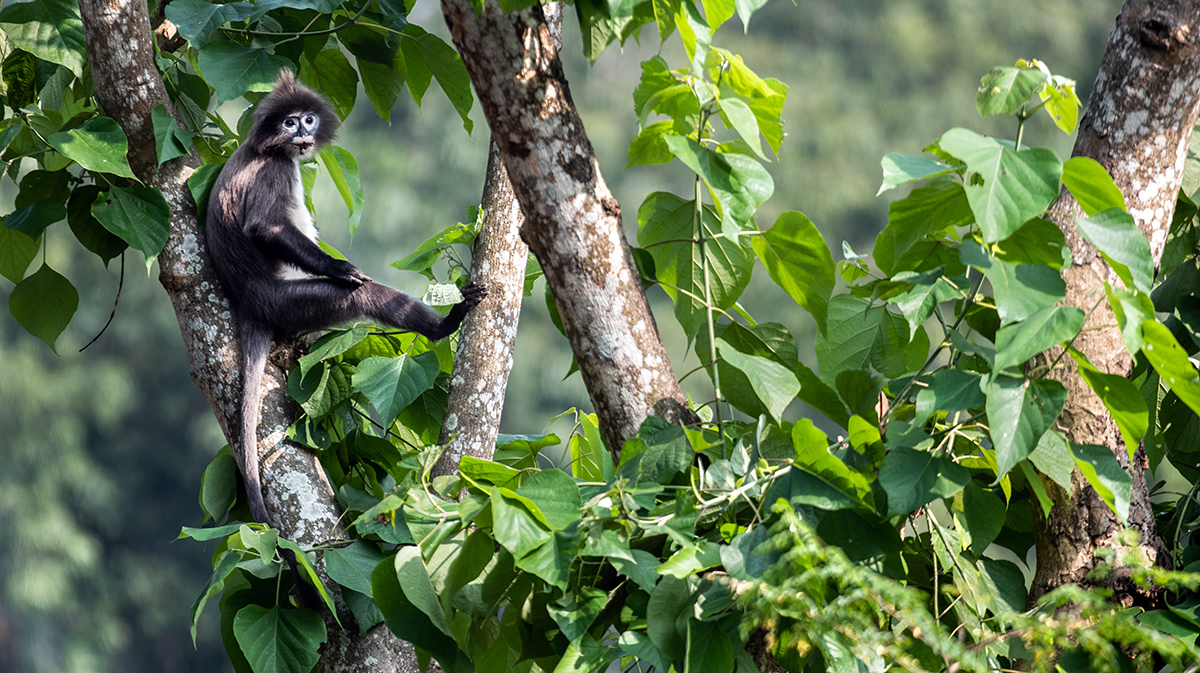 The endangered Phayre’s leaf monkey or the spectacled leaf monkey is recorded in Tripura, Assam and Mizoram. Photo by Shatabdi Chakrabarti.