From barren land to a popular heritage park

Many of India’s major urban centres resemble concrete jungles with little space for green areas, but the 90-acre Sunder Nursery Heritage park in Delhi is a sight for sore eyes.

Although the renovated 90-acre Sunder Nursery Heritage park opened in 2018, it remained one of Delhi’s best-kept secrets until the pandemic.

“Last year, Sunder Nursery had 300,000 visitors. Considering it is still a new destination, this number is huge, and 2020 was a COVID year with no international visitors. People do appreciate areas that are green, clean, secure and have heritage,” Ratish Nanda, a conservation architect and the chief executive officer of the Aga Khan Trust for Culture (AKTC), told Mongabay-India while talking about the growing popularity of the heritage park,

In fact, thanks to the gardens, water bodies, monuments, and biodiversity, Sunder Nursery, which was once barren land has quickly grown to become one of India’s national capital’s most sought-after outdoor recreational places. “The diversity of people coming to Sunder Nursery is amazing. We get people from every class and every religion,” Nanda said. 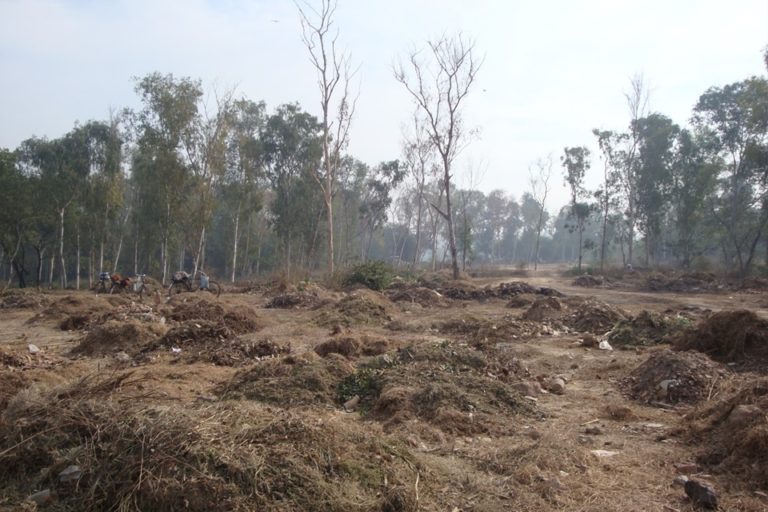 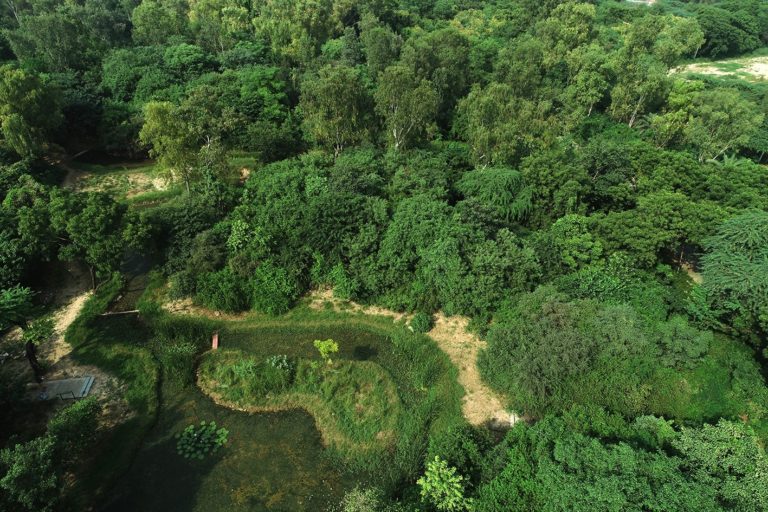 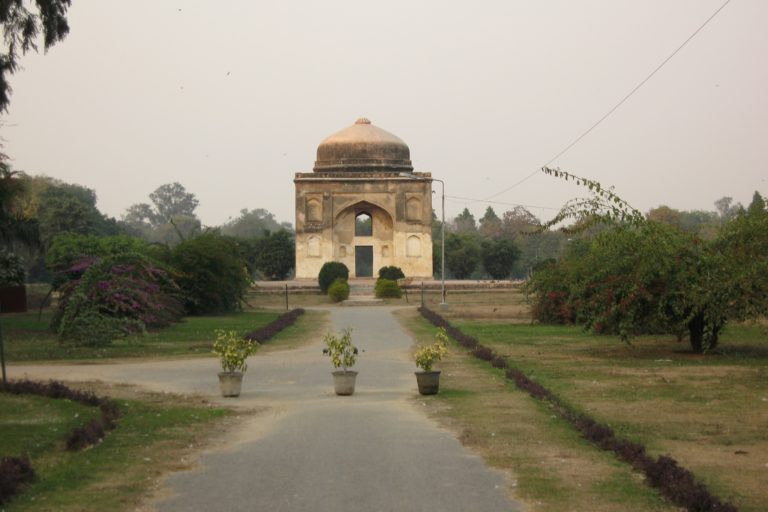 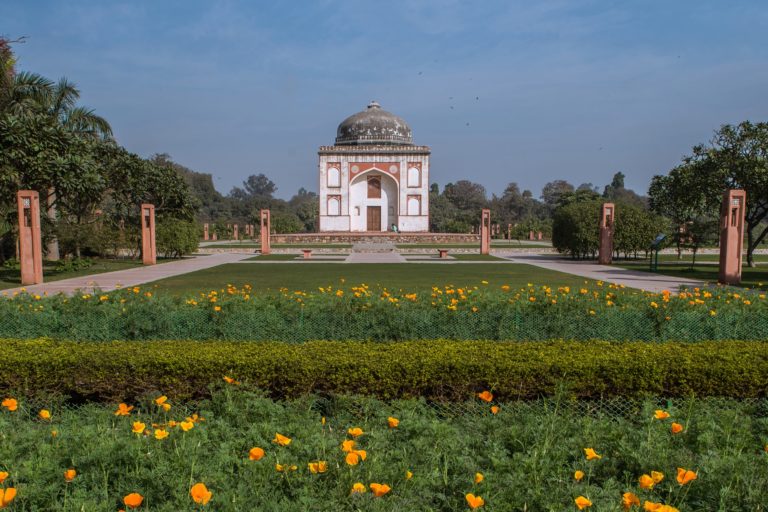 Initially built by the Mughals in the 16th century as Azim Bagh, the Britishers later used this site from 1913 to grow exotic plants imported from other places such as South Africa, Australia, and New Zealand. Thus came the name ‘Nursery’, while ‘Sunder’ came from the Sunder Burj tomb located on the same complex. The forgotten place, however, was revived by the AKTC in collaboration with the central government’s Central Public Works Department (CPWD), the South Delhi Municipal Corporation (SDMC), and the Archaeological Survey of India (ASI).

In fact, a decade of painstaking restoration work has now become an apt example of how the public and private sectors can collaborate to develop sustainable projects. Home to over 300 species of trees, Sunder Nursery is Delhi’s first Arboretum with some rare trees such as a Pink Cedar, Coca tree, Wild Almond, Krishna Fig, Satin leaf, Dillenia, Pichurea Rosea, and African Mahogany among others.

In 2018, the park was chosen by the ‘Time Magazine’ as one of the 100 world’s greatest places to visit. Recently, in 2020, it became Delhi’s first heritage complex to receive two UNESCO Asia-Pacific awards for Cultural Heritage Conversation 2020 – the ‘Award of Excellence’ and ‘Special Recognition for Sustainable Development.’ However, Sunder Nursery’s success also shows the key challenges stalling the growth of such projects in India.

Read more: A forest in a city: Maintaining Chandigarh’s green cover in the face of urbanisation

Among the many reasons outlined for the transformation of Sunder Nursery, one is that the public and private sectors collaborated with clearly defined roles of each.

Ratish Nanda, who works closely with several government bodies and private sector companies in restoration projects, explained that “many people in the government feel only they should work on the projects … the private sector feels the same.”

“We, however, at the AKTC, work with governments in 30 different countries. The idea behind doing a park in Delhi was to work alongside the government to meet many of its objectives – improving the quality of life and preserving the monuments. We brought in the expertise along with the money, and the government helped us in issues that were beyond our control,” he said.

Stressing on the importance of involving the government bodies in the conservation work, Nanda said: “20 acres of present-day Sunder Nursery was under encroachment, and we worked with the CPWD, the ASCI, and the SDMC to remove that encroachment. What is today our rainwater harvesting area was once a private club, and the parking space was a swimming pool. We couldn’t have cleared it without the government’s support.”

Vikramjeet Singh, an activist working on heritage issues and a regular at the Sunder Nursery, emphasised that the government alone can’t do everything. “There are 174 buildings under the ASI and 300-400 under Delhi Government. The maintenance of a single monument costs roughly around Rs. 20,000 – 25,000. The government doesn’t have that kind of funds to maintain all buildings. They have other pressing issues to tend to. So, they clean up the premise and lock it up. As a result, many public spaces either get illegally encroached or are ruined due to negligence. Maintenance of heritage cannot be done without community participation,” Singh told Mongabay-India.

Experts stress that unless the government makes the conservation process inclusive, such monuments will be lost. For instance, Singh shared that there are 72 monuments in Mehrauli Archaeological Park but visitors can only see 7-8, as most of these heritage sites were either used as waste dumping sites or encroached.

Experts such as Singh also note that when stakeholders such as heritage lovers, resident welfare associations, non-governmental organisations, and students are involved, the government’s task becomes more manageable as they don’t have to do everything by themselves. In addition, if professionals bring in the expertise and knowledge of doing similar work elsewhere, it becomes easier.

The economic potential of heritage and open spaces

Emphasising how sustainable it is to restore a monument, Nanda said: “we did the garden restoration of the Humayun Tomb, and we recovered the money spent in the next nine months itself due to excessive sales of the tickets at Humayun tomb … and the amount earned is spent on the garden maintenance and further improvement.”

He said heritage should not be left to ruins as it is an economic asset but “sadly, the tourism potential of heritage is not yet realised in India.”

Environmentalist, author, and “native-plant” garden creator Pradip Krishen told Mongabay-India that there are 2,600 native species of trees found in India. This number is substantially high when you compare it with the United Kingdom that has got just 27 native tree species, and the whole of Europe has just 1,600 species.

He emphasises on being more open-minded about growing native trees as they are more adaptable to local conditions and need less maintenance. “When we do ecological restoration, we should find inspiration from a natural reference site instead of experimenting with exotic species. We should look at their natural growth pattern and try to replicate that,” Krishen said.

Environmentalist Kavita Prakash, who runs Sausage Tree Nature Walks echoes Krishen’s thoughts. “More than planting new saplings in bulk, it’s crucial to let the native trees grow as per their natural progression. When we allow the native trees to grow, then the entire ecosystem benefits,” she said.

Prakash narrated how scientists at the Yamuna Biodiversity Park in Delhi used the native plants to create an ecosystem to bring back the Night Heron bird; the species had almost vanished from Delhi 17 years ago.

Heritage and ecological restoration requires expert knowledge and should be handled by experts, who feel the model that the AKTC has created a template on how heritage management can be done efficiently through a public-private partnership and now it’s up to others to follow.

Banner image: In 2020, over 300,000 people visited Sunder Nursery even though travel was limited due to COVID-19 related lockdowns. Photo by Archana Singh.