Narayan Gaikwad, 74, never thought he would have to rethink farming — an occupation he has been practicing for over six decades. But, the rise in the price of chemical fertilisers along with depleting soil nutrients nudged Gaikwad to shift to organic farming, for the June 2020 farming cycle.

“I’ve experienced this only in the last four years,” says Gaikwad, a resident of Jambhali village in Maharashtra’s Kolhapur district, about the changing weather patterns.

Since 2019, Kolhapur has been witnessing intermittent spells of rain. Then, suddenly, there was a rise in the temperature between these spells, which affected the crops. In the winter season, the temperature dropped rapidly, an uncommon phenomenon in Kolhapur’s Shirol taluka.

Farmers assumed that using more chemical fertilisers would lead to better yields and help the sugarcane crop cope with the changing weather patterns.

However, with the increased use of chemical fertilisers, Gaikwad observed the soil turning saline in neighbouring farms. He was worried. And an existing debt meant he had to save every rupee. “For an acre of land, we require chemical fertilisers worth Rs. 20,000, and I didn’t have any rupee,” he says.

It was his grandson, Varad, 9, who helped him find a solution.  One day, Varad, who loves watching tractor videos on YouTube, used the voice command feature to search for “shendriya khat (organic fertiliser).” Immediately, several videos on organic farming and fertilisers popped up. Gaikwad spent a week browsing them.

Making mental notes, Gaikwad first collected 190 litres of water in a discarded barrel. He then added ten kilograms of desi (indigenous) cow’s dung, 10 litres of cow urine, a kilogram of chickpea (gram) flour, and jaggery. Next, he shielded this concoction from sunlight for the next five days and would stir this every day for five minutes. On the sixth day, he released this organic concoction with the water supply in the field.

Over 2020-21, he repeated this process every 20 days, roughly 18 times in a year on his 1.5-acre field. In the end, he harvested 77 tonnes of the Co 86032 and Co 8021 sugarcane varieties through this method.  “Had I used chemicals, the produce would have been close to 100 tonnes,” he says, talking of the trade-off. However, Gaikwad is still proud of his efforts. 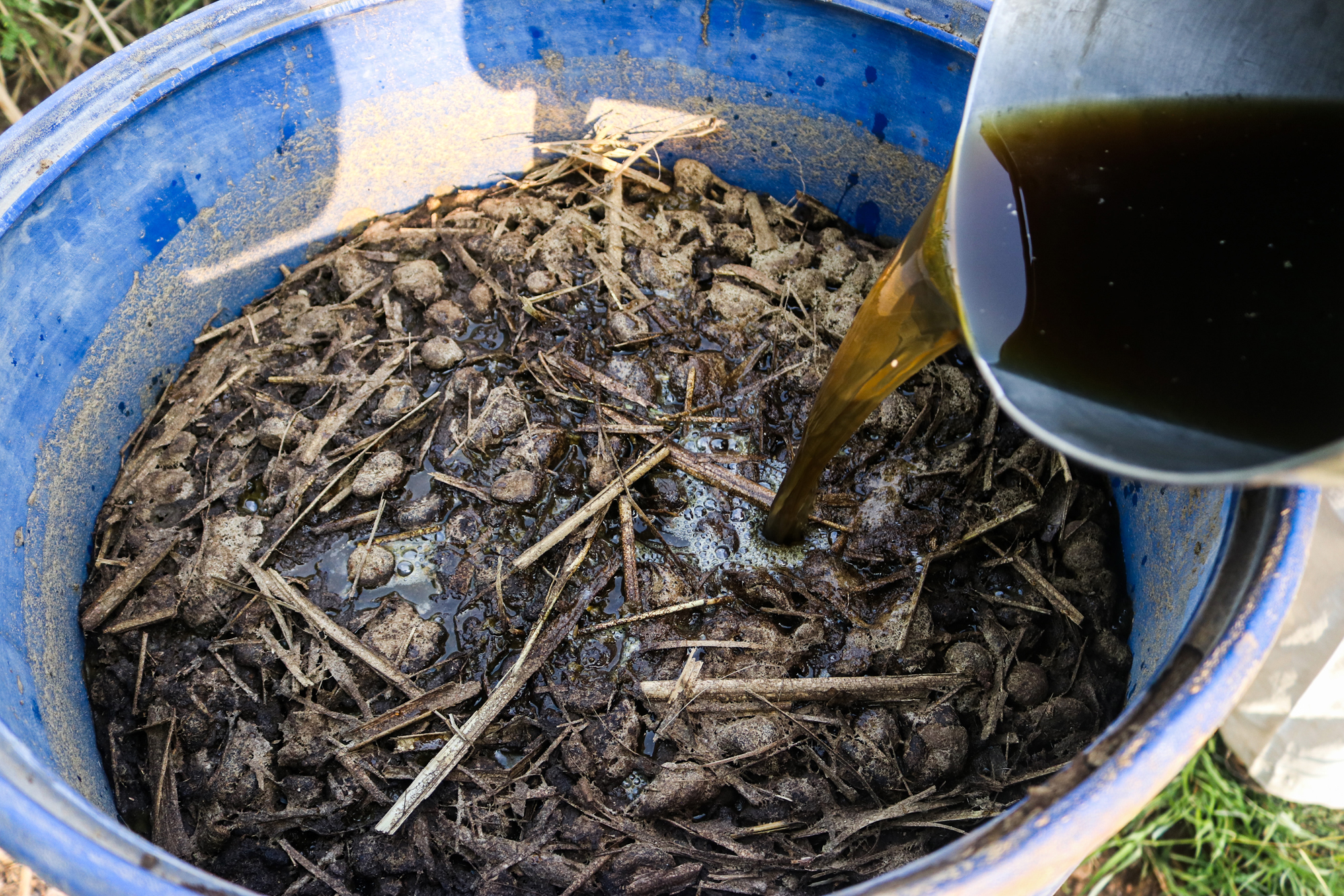 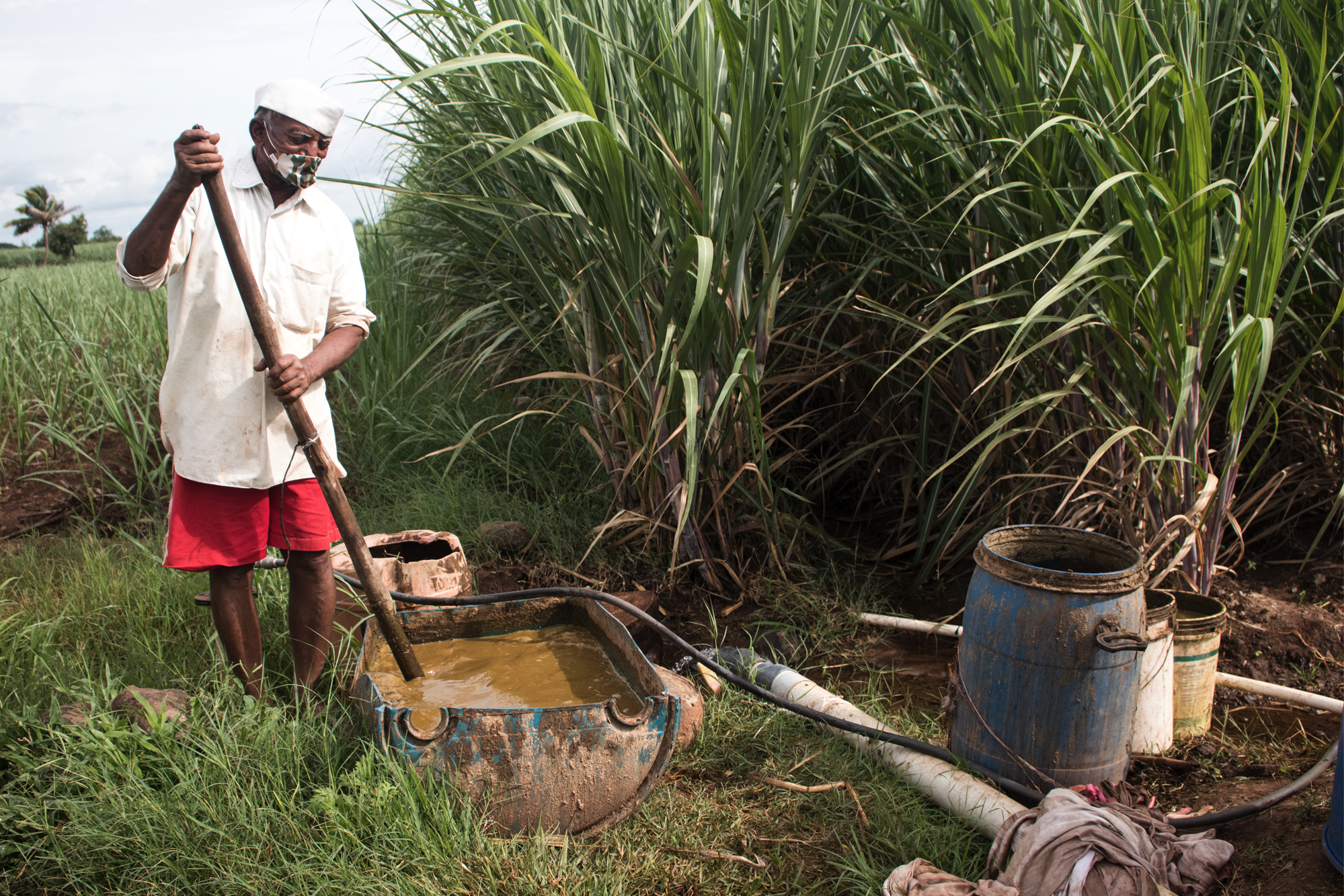 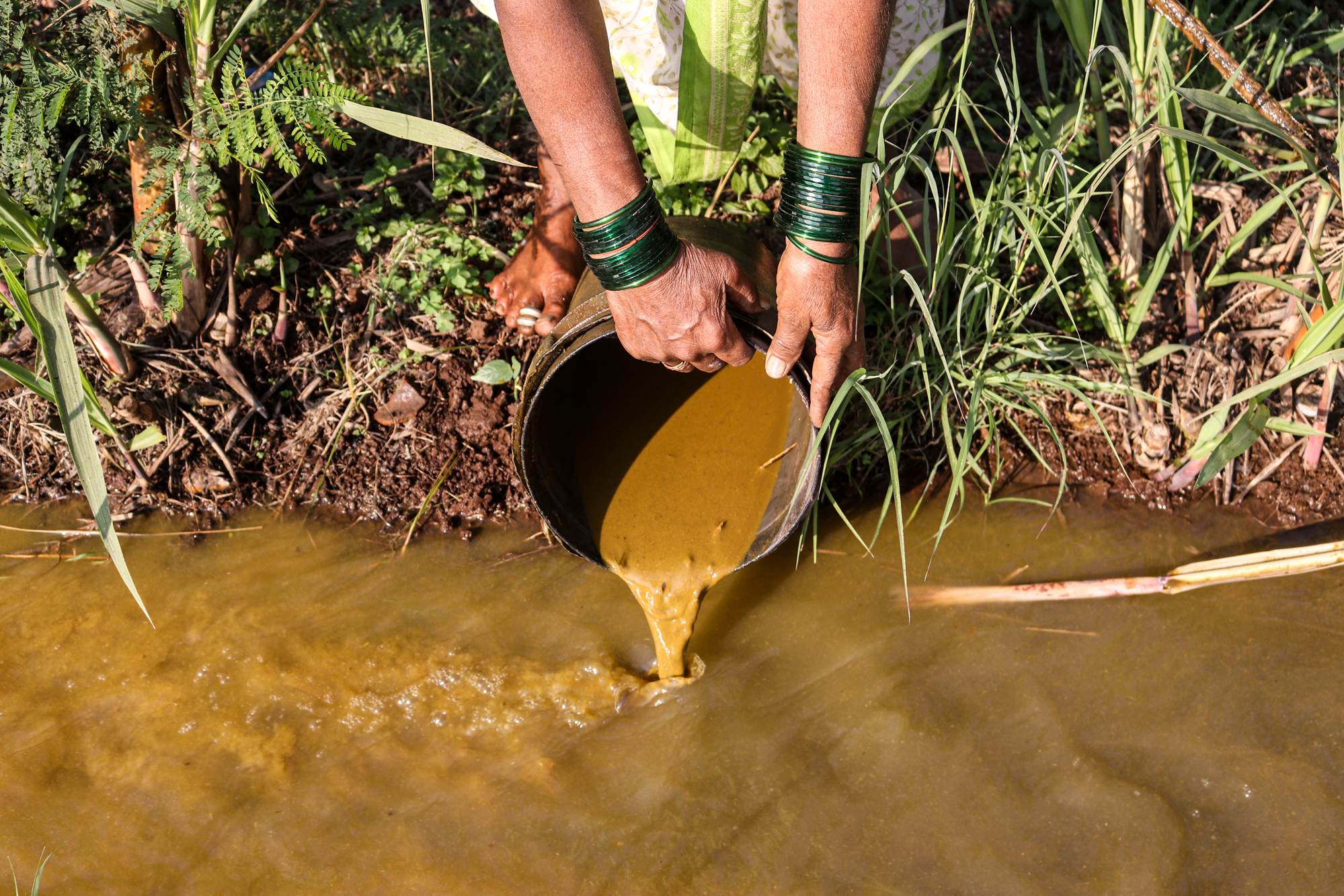 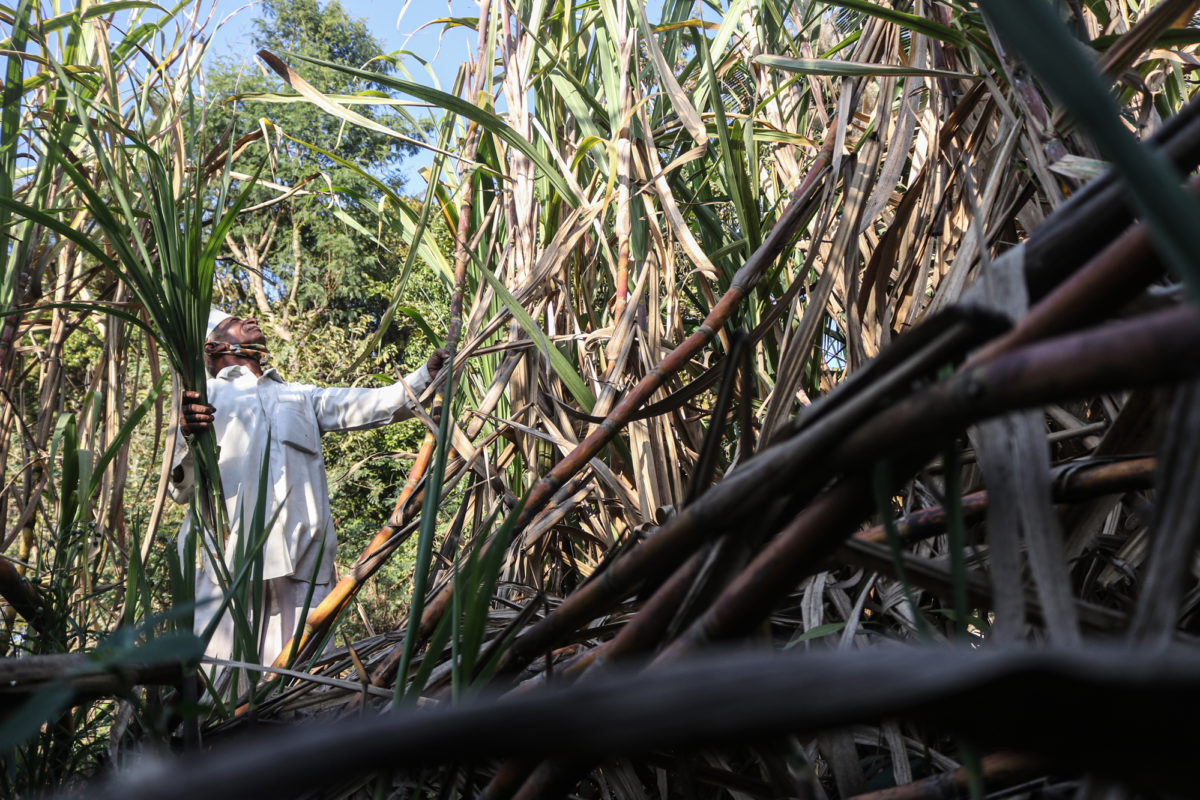 Narayan Gaikwad in his field in January 2022. The 74-year-old switched to organic sugarcane farming post-June 2020. In the first year of organic farming, he harvested 77 tonnes of the two sugarcane varieties in his 1.5 acre field. While using chemical fertilisers often provides a higher yield and comparatively requires lesser time on the field, Gaikwad is proud of his decision to switch to organic. Photo by Sanket Jain/Mongabay.

In the first year of increased chemical fertilisers, Naik reported a bumper harvest, 30 tonnes more than the previous yield. However, it didn’t go well when he repeated the same process in 2021. “The floods yet again destroyed my sugarcane. I lost everything cultivated on my four-acre farm this time.” After the floodwater receded, he was shocked to see soil turning saline.

After consulting senior farmers, Basvant Naik had no option but to abandon sugarcane. “What if it floods again? Also, my soil does not have enough nutrients.”

Naik’s story is becoming rapidly common as the global consumption of agricultural fertilisers crossed 190 million metric tons in 2019, from 46.3 million tons in 1965.

Looking at the rapidly rising incidences of soil salinity, Narayan Gaikwad and his wife, Kusum, 67, feel organic farming is the way out. “The production is less, but once your soil completely turns saline, you won’t get a single crop,” says Kusum. In addition, farmers in Kolhapur’s Shirol region have reported rising instances of wilt where the crown sugarcane leaves turn brownish-yellow.

“Look at our sugarcane; you won’t find any tambira (wilt),” she says. In the second year of organic farming, they’ve increased the organic cultivation to two acres of the 3.25 acres they own. “By next year, we’ll make sure even our sons shift to organic farming completely,” says Gaikwad.

While the Gaikwads saved a considerable sum, their working hours have increased to almost 10-11 hours daily, in part due to the switch from chemical fertiliser to organic inputs.

“If you only use your cattle for milk, then it’s unaffordable. People call it dirty to collect dung, but cattle are poor people’s fertiliser factory,” Gaikwad says.

Collecting cow dung and cow-urine takes time. Since Gaikwad doesn’t use weedicides, he has to manually remove the weeds and unwanted grass using a sickle which takes a lot of time. Hiring agricultural labourers is not affordable for many. Hence, most farmers prefer increasing the use of weedicides which saves them the cost of manual labour.

Gaikwad says, an influential village politician, introduced chemical fertilisers in the early 1960s in Jambhali with the production of corn and pearl millets. “Finally, I stopped using chemicals in 2020,” he says with a wide grin.

India cultivates sugarcane on 12.6 million acres of land, making it the second-highest sugarcane producer globally, next to Brazil.

Soil chemist Ravindra Herwade from Shirol’s Datta Sugar factory says, “Organic farming is viable, but not many farmers are doing it fearing lower produce. But, if the salinity keeps increasing, the overall average production turns out lower over the years.” Herwade has observed a rise in the salinity with “several farmlands turning barren in Shirol taluka.”

Talking about the impact of organic farming on soil health, he says, “A few farmers are trying out organic farming, and the results look good. They are reporting sugarcane produce of better quality, and even the soil nutrients have improved.” 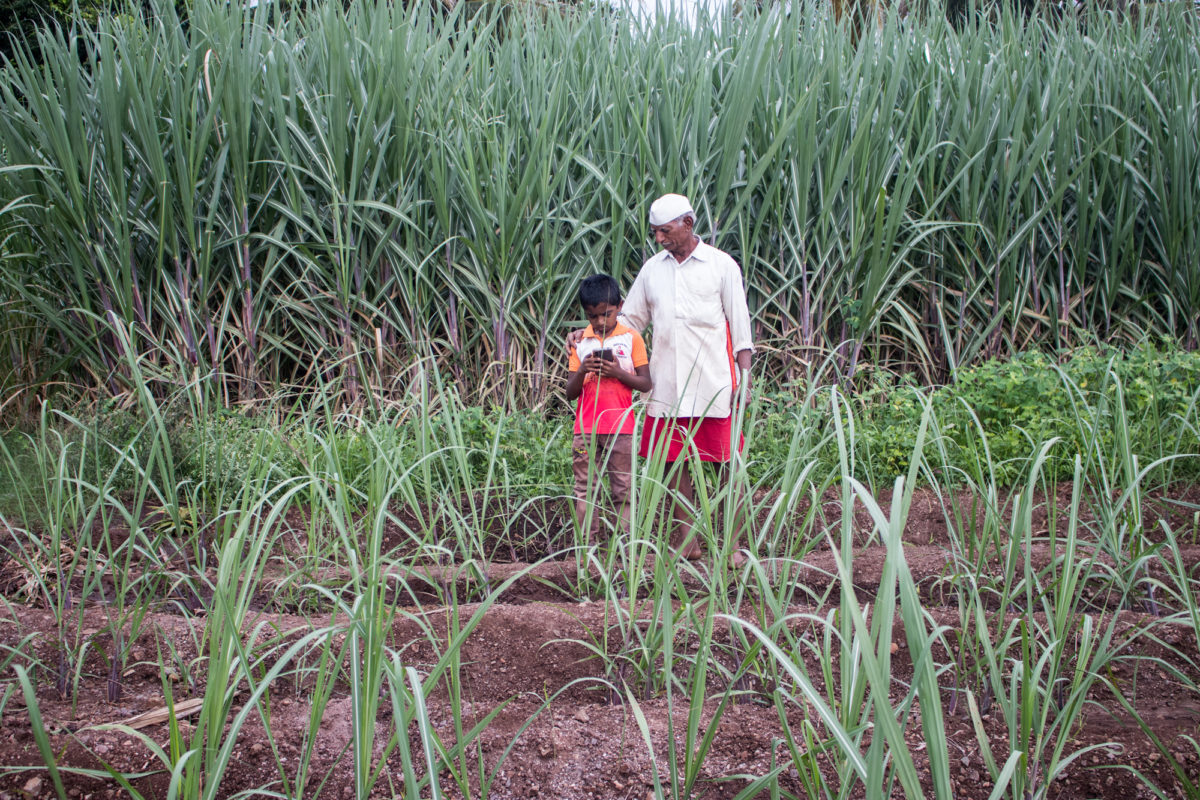 Narayan with his nine-year-old grandson, Varad, who turned to YouTube in 2020 to get information about organic farming as his grandparents’ woes with chemical fertilisers kept mounting. Photo by Sanket Jain/Mongabay.

Banner image: Narayan Gaikwad proudly shows sugarcane from the first harvest in 2021 after switching to organic farming in 2020. “If we don’t shift to organic farming now, it will be too late,” he says. Photo by Sanket Jain/Mongabay.