India is frequently impacted by climate-related disasters and the need for climate adaptation measures is growing. The second biennial update report presented to the United Nations Framework Convention on Climate Change (UNFCCC) gives a glimpse of the country’s climate-related vulnerabilities. As per the report, 27 of India’s 36 states and union territories are disaster-prone. Also, 12% of the land area is prone to flooding and river erosion, with another 15% prone to landslides; 76% of the approximately 7,500 km coastline of the country is prone to cyclones and 68% of the cultivable land is vulnerable to drought.

While promises of developing countries such as India receiving climate finance from the developed world remain vague, there is a need for scrutiny of these countries’ climate change mitigation and adaptation measures.

India updated its Intended Nationally Determined Contribution (INDC) targets in August 2022, seven years since it first submitted its targets to the UNFCCC. This update included two new targets. The first target is to reduce the emissions intensity of the country’s GDP by 45% by 2030 as against the earlier target of 33-35% (compared to 2005 emission levels). The second target is to achieve about 50% cumulative installed electric power capacity from non-fossil fuel sources (including nuclear) by 2030.

On the other hand, one target that remains unchanged is creating an additional carbon sink of 2.5 to 3 billion tonnes of CO2 equivalent through additional forest and tree cover, meaning the LULUCF (Land Use, Land-Use Change and Forestry) sector by 2030.

While there have been discussions on what the updated targets mean for India’s climate action plan, the unchanged target merits closer attention.

The government’s official stance has been that forests are a net sink of carbon dioxide (CO2) emissions and positively contribute to climate change mitigation. Forests and other ecosystems are increasingly being seen as part of a broad umbrella of nature-based solutions (NBS).

Across the world, nearly an estimated third of greenhouse gas mitigation required to avert a climate crisis will come from these NBS, including protecting and restoring forests, peatlands, afforestation, blue carbon, improving agricultural practices, etc.

However, treating forests as sinks are marred by several methodological and technical challenges, such as differential rates of CO2 absorption in different forest biomes, different rates of absorption of growing forests vis-a-vis standing forests, accurate accounting of deforestation, etc. The variations between different types of forests across geographies add to the challenges.

A study by Centre for Science and Environment, a Delhi-based non-profit, highlights this aspect of NBS. Researchers reviewed studies estimating the CO2 mitigation potential of land and forests between 2017 and 2022. The studies varied widely in terms of the pathways analysed (reforestation, agroforestry,) the biomes selected (forests, wetlands), and the time horizons that determined the resultant mitigation potential. The study suggested that many of these studies offer ‘overly optimistic’ estimates of the amount of additional CO2 such lands can capture.

India’s targets on forestry, by its own admission, are the most ambitious in the forestry sector by any country. The 3rd biennial report that India submitted to the UNFCCC in February 2021 claimed that the LULUCF sector has acted as the carbon sink, sequestering 330.76 million tonnes (Mt) of CO2, which is about 15% of India’s total CO2 emissions from all sectors in 2016. It also said the forest and tree cover has increased to 8,07,276 sq. km. in 2019 from 8,02,088 sq. km. in 2017. The net change in the carbon stocks of forests was +42.6 Mt, as per the report, which cites Forest Survey of India (FSI) data.

Several studies have speculated about the meaning of the ‘additional’ component of the unchanged target. A report by the Ministry of Finance said that the interpretation of the target posed a challenge mainly about the inclusion or exclusion of options to improve the density of existing forests due to no mention of a base year and the repeated use of the word ‘additional’ used twice in the target. A sub-committee prepared the report to assess the financial requirements for implementing India’s NDC. It says, “The target may have to be achieved only by adding areas to the existing forest and tree cover majorly by afforestation outside forest area, thus by creating new forests and from sequestration of carbon in the increased extent of trees outside forest (TOF) comprising urban forestry, agroforestry, avenue plantation”.

The report further states, “But whether the forest enhancement through density improvement in existing forests will be counted toward the target or not, remains uncertain.”

While assessing the viability of various forestry-related tools for the fulfillment of climate-related targets, the report noted that the increasing volume of Compensatory Afforestation Fund Management and Planning Authority (CAMPA) funds would contradict the objective of financing initiatives to meet targets of increasing forest cover. This is important from the point of view that CAMPA is one of the instruments that will contribute towards the achievement of the target. 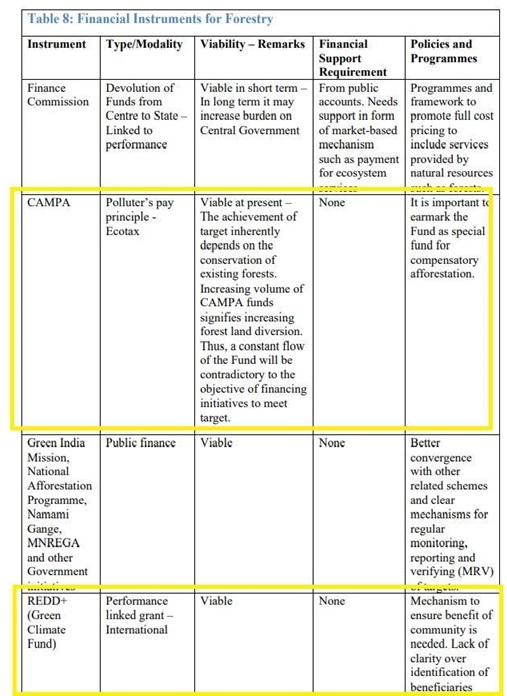 The government has admitted that schemes like CAMPA may have an impact contradictory to the objective of financing initiatives to meet climate mitigation targets. It says that the “achievement of the target depends on the conservation of existing forests.” However, that “increasing volume of CAMPA funds signifies increasing forest land diversion.” 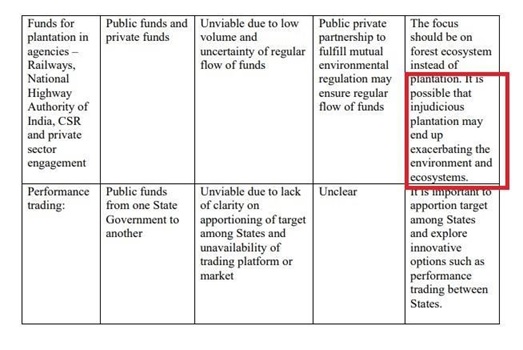 India also released Forest Conservation Rules in June 2022. The rules will likely promote more forest diversion and have provisions for accredited compensatory afforestation etc. The rules also violates communities’ rights as projects will be given stage-I clearance without following the due diligence to the settlement of the forest dwellers.

Forests in India and the people living therein

The land and forestry target highly volatile and combined with the recent developments in the FC Rules 2022, it may also involve an increasing number of contradictions, with those most in need of climate adaptation measures suffering the most in the name of mitigation activities.

More than 300 million people in India depend on forests for their livelihoods. India’s forests comprised 2% of the world’s forest area in 2020, according to the Global Forest Resources Assessment 2020 published by the Food and Agriculture Organization (FAO) of the United Nations (UN). Between 2010 and 2020, India ranked third in an average annual net gain in forest area (0.3% annual net change).

Though India has spent billions of dollars, it is not clear what the country has achieved with afforestation-related activities such as CAMPA. These programmes have often led to distress for communities residing in forested areas, is amply clear. Additional plantations will lead to these communities losing lands further. As elaborated in the table below, these programmes have seen funds flow to over USD 10 billion in the last five years.

Several studies have highlighted challenges in making these projects accountable. Officials have raised concerns in the forest bureaucracy about the lack of accuracy of the Compensatory Afforestation data. Earlier, the MoEFCC also said that it did not maintain any data on Compensatory Afforestation beyond the information published on the Ministry’s e-green watch web portal, which includes information about plantation proposals and financing. However, much of the data maintained on the portal does not reflect the progress of several past plantation programmes.

But, to push for newer projects and provide forest clearances, Compensatory Afforestation programmes are proposed without adequate review and monitoring. There is also no clarity on how the land for such large-scale afforestation or reforestation will be acquired. Several afforestation programmes, the largest one being the CAMPA or CAF 2016, have further disenfranchised Adivasi communities and other forest dwellers.

In several incidents, customary lands and forests of STs or OTFDs – over which forest rights have been claimed or recognised – were diverted for afforestation. Often, local communities are not made aware of programmes taking place in their areas and end up evicted from their traditional homes. While compensatory afforestation requires prioritising non-forest land, land scarcity is increasingly leading to the acquisition of degraded forests – an important source of sustenance and livelihood for STs/OTFDs. Degraded forests constituted more than 75% of the total land taken up for compensatory afforestation from 2016-17 to 2020-21. Contrary to what the name “degraded forests” suggests, these forests are lands surrounded by villages and used for various purposes.

When there is uncertainty over the forest-related targets and how new forests will be grown, it is undeniable that the rights of indigenous and forest-dwelling communities over forest land are most important. Any intervention on forest land can’t take place without the intervention and support from these communities. It is unclear, then, why laws such as the Forest Rights Act are not given due consideration in imagining a new forest governance regime. The FRA has provisions for sustainable management and conservation of forests. Instead, there are attempts to dilute the law by bringing in the FC Rules and more such interventions.

Despite its own reports highlighting how the afforestation-related activities are contradictory to both, the intention of preserving forests and protecting the rights of communities, it is unclear why there is a newer push to further intensify afforestation as part of India’s climate change mitigation activities.

The achievement of the sustainable targets inherently depends on protecting existing forests in a manner that’s amenable and beneficial for communities. Legislation such as FRA incentivises communities to protect and sustainably manage forests. However, some more recent policies, such as the FC Rules 2022, may have an adverse effect on the bigger cause. In a bid to promote faster-paced forest diversions, the rules removed the clause of taking the consent of communities. On the other hand, a push for afforestation to achieve the existing target is likely to impact the environment and people adversely, as has been shown so far.

To imagine a more holistic paradigm of climate mitigation, there needs to be an appreciation of communities involved in the historical management of forests. The inclusion and representation of communities that live on these lands are important at this stage.

Sushmita is a research consultant and works on forest economy and governance.

Banner image: A part of the forest area close to the elephant corridor at the Hadgarh Wildlife Sanctuary in Odisha. Photo by Manish Kumar.