[Commentary] The flight of a bustard

The great Indian bustard (GIB) is the heaviest flying bird in India. Dr. Salim Ali once championed it to be the country’s national bird. And it is on the verge of extinction. This is just about what I knew about this species when I decided to see the bird at the Desert National Park on the outskirts of Jaisalmer, Rajasthan; in the frigid desert winter of mid-December.

My interest in seeing the great Indian bustard can be broadly categorised as two-fold. First, to try and comprehend how such large, heavy and rather un-aerodynamic looking birds, with their bulbous body and awkwardly long neck and legs, fly. After all, ostriches are equally dumpy, and they are superbly well-grounded.

Second, was to understand extinction. To be clear, I am very familiar with the word as it exists in the language or everyday parlance. My employment is also somewhat dependent on me knowing it as I teach environmental science to engineering undergraduates. And even beyond this, popular media has made it nearly impossible for an average consumer to not know about extinction, as not a day’s worth of news goes by which does not broadly touch upon it in conjunction with other related topics such as climate change and global warming among others. But the word as written on paper manifests as a statement of existence or, at best, an abstract concept when used in scientific settings. In these forms, it loses certain critical aspects of its true definition, thereby reducing much of its impact on us. These aspects are brought into full resolution more readily when one tries to witness it. With extinctions becoming more frequent, I thought it necessary as an educator and, in most cases, a constituent of its primary cause, to understand this word in its entirety.

At the Desert National Park, the GIB wasn’t particularly hard to find – taking all of maybe an hour and a half of scouting around the wire-mesh enclosures built to reduce disturbance to them and their habitat. My first sighting of the bird was, to my luck, it in flight. As the open top Gypsy (did I mention this was on a frigid mid-December morning?) I was on was tackling a particularly sandy patch, the revving of its engine must have spooked a hidden individual who immediately took to flight. Almost overhead, it felt more like an eerily quiet jumbo jet than a bird. The sheer size of the bird was paralyzing; faintly evoking a long-suppressed mammalian fear of dinosaurs. But the flight itself was majestic, with not a hint of the labour and desperation one would expect and see in the flight of a large bird, like in that of the Indian peafowl, which is infinitely more graceful standing. Every wing beat it made, unfurled the taut understanding of time that the mind relies on to keep track of reality, distorting what must have lasted a few seconds into a seemingly endless loop, progressively wrapping my psyche with a sense of wonderment.

I spent the better half of that day looking at these birds from the safe distance of the wire mesh enclosures, in the process probably easily managing a world-record for the longest time for a human pupil to have remained dilated. I have always understood Dr. Salim Ali’s bid to make the GIBs our national bird purely as an effort to throw light on an otherwise overlooked species and encourage their conservation. But, as I stood there in the frigid desert, watching these birds go about their daily lives, I found it hard to wrap my head around the sheer regality that they exude. While the peafowls easily dazzle with the hues on their bodies and radiating tail feathers, the GIBs influence on you is far more subtle. You realise their beauty rather organically. While the flight is the bustards’ obvious party piece, what really gets you is their gait which is very calm paced and careful- much like that of a queen. They lull you into a trance with their smooth and effortless movements and charm with their delicate mannerisms. And just when the mind is completely bewitched, they shatter the spell by wowing you with their flight. It is no wonder then, that Salim Ali wanted them to be our national bird. Associating ourselves with such a majestic and charismatic species would be a boon for us and not the other way around!

As I sat there, admiring and taking both mental and actual pictures of the GIBs in the gorgeous backdrop of the desert, I slowly felt a sinking feeling building up inside of me, accompanied by the forming of cold sweat on my brow. It took a while for me to figure out that what I was feeling was guilt. The great Indian bustards are on the verge of extinction. Whatever impotence the word possessed in describing the sorrow and guilt that it should evoke was powerfully compensated by the presence of the bird in sight, staring at me. Extinction is the death of a species. It’s a permanent hole in the ecological tapestry in which we are interwoven. It is a great loss. These feelings imposed an insurmountable weight on my soul and I remember not being able to look back.

In the desperation of the moment, I tried grasping for ways that could alleviate the myriad issues GIBs face. Surely, they can be saved by employing captive breeding. Though, the success rates for bustards in such programs is usually low. Surely, new conservation policies can be introduced to halt their numbers from dwindling further. Though, the efficacy of the numerous policies already in place hasn’t been great. This only felt more suffocating. 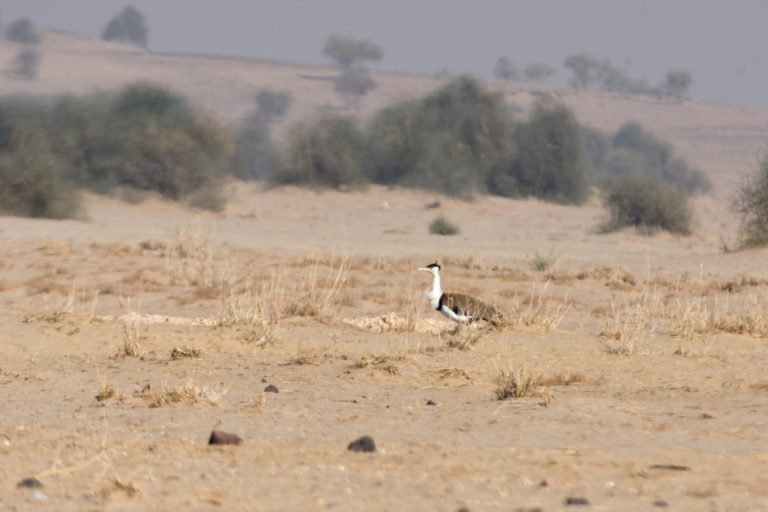 The GIBs are neither the first nor the only part of wildlife on the verge of becoming an apparition. There are others; some known and many unknowns who share the same fate, mostly because of us. But this is somewhat paradoxical because humans do care immensely about wildlife. After all, anyone who has been on the internet for any length of time will be hard-pressed to escape an animal-based meme or the plethora of awe-inspiring pictures of scenic landscapes and wildlife. We also have whole-heartedly expressed sorrow and anger for atrocities committed on animals through various means in the past. For Harambe, the Western lowland gorilla killed at the Cincinnati Zoo, people organised vigils. For Cecil, the lion gunned down by the Minnesotan dentist in Zimbabwe, entire governments and even the United Nations were moved to condemn trophy hunting. Such examples are numerous.

But it’s a lot harder to pick out an example where a more measured response was generated to conserve something nameless or has few social and cultural underpinnings. It would seem then that the bustard’s case is emblematic of all species who are on the verge of extinction but have already vanished from even our peripheral vision. We are easily capable of expressing extreme bursts of compassion for a few identified icons of the wild but are consistently unable to channelise it sustainably for nearly anything else that actually composes it. And even in the cases where we do rise to the occasion, it appears to be more to free ourselves of guilt than anything else; to proclaim loudly that we are not the perpetrator. To shout at the top of our voices and type in all capitals, just to gain the mental satisfaction that we have done whatever we could have done to right a wrong. Then we are off to our cars, asking for plastic bags at grocery stores and ordering take-out.

The reasons for this disconnect are myriad- ranging from the socio-cultural distance that a capitalistic economy creates between us and the natural environment to the various stresses and distractions that modern living encourages. While all these reasons are legitimate, the categorical neglect resulting from them only makes us guilty of an unwitting genocide of the wild.

Extinction is a great loss. But one might not be able to feel this depending on how unfamiliar one is with the afflicted. After all, how does our life diminish if the GIBs die? The desert will still exist and our lives will still go on largely unabated. But each extinction breaks age-old connections, creating ripples through the delicate strings that form the matrix of life. The resulting vacuum also forces the natural system to shift the role borne by the extinct species to something else; thereby skewing its entire weight distribution, which took eons to perfect, resulting in an imbalance which amplifies the effect of every subsequent extinction. Right now, these ripples might be small and skew in weight distribution too slight to notice. But it won’t be long if we continue to let species like the GIBs to wither away, that they become unbearable and inescapable.

To prevent this, it is necessary that we inculcate a sustained and nuanced passion for nature; all of nature. To understand it beyond the few iconic symbols and realise the beauty and importance of the mundane, native and seemingly insignificant. To recognise that a dying species cannot be saved at one’s convenience or by debating vigorously on social media. And most importantly, to understand nature as a part of us, and us as a part of it.

This can be easily achieved, in most cases, by the simple act of stepping out and slowing down enough to be able to pay attention to the sights and sounds with which nature beckons us. By never losing that childlike curiosity to know more about our surroundings. By taking the time to recognise the delicate machinery and complex relationships that, many times, culminating in the plethora of natural luxuries we take for granted and enable life itself. And finally, if possible, by simply falling in love with it. For if given a chance, it can be the ultimate seducer.

As the evening started to set in, my body, tortured plenty by the desert cold begged me to head back. Heeding to it, I turned around to look at the lone GIB that had given me company for the longest to cram in as much of the memory of the now quickly fleeting moments I had with it. Just then, maybe sensing our impending departure, it lifted its broad wings and swiftly took to flight, making me skip a breath in surprise. I kept track of its every moment as it flew in a wide arc before my sight of it was obstructed by a tall bush. My eyes followed the trajectory that it would have taken behind the bush and waited on the other end of it, expecting it to appear momentarily. But it never came. My eyes gave it more time, doing a quick visual recalculation and focusing harder on the same reverified point. But it never happened. The deep mental connections I had forged throughout the day with the bird suddenly broke and the desert quickly felt emptier, colder and infinitely lonelier. For the first time that day, I was aware of my body shuddering; but I knew, it was not from the cold. For at that moment, I got a glimpse of what the world would be if the GIBs, and others like it, take that final dispiriting flight to oblivion.

[Shaurya Rahul Narlanka is an assistant professor at MIT, Manipal].