Where do fish go for a spa?

“The most extreme thing about the ocean is its sheer, inconceivable size. In that enormous volume – the biggest habitat on earth – lives a kaleidoscope of animals, plants, microbes and viruses. Indeed, the ocean nurtures the most fascinating and unique creatures in the natural world. They occupy many different habitats and deploy diverse survival strategies.”

– Stephen R Palumbi and Anthony R Palumbi in The Extreme Life of the Sea.

One of these many strategies is an intriguing symbiotic understanding between two sets of species. Under the ocean’s surface, coral reefs – the rainforests of the seas – build tiny worlds within them. Reefscapes act as towns in the giant ocean, which animals use for homes, food, shelter, and sometimes, a thorough spa treatment. In other words, reefs facilitate cleaning stations, small little spas or nature’s very own idea of a car wash in the ocean!

A cleaning station is a space on a reef that is marked by the presence of cleaners – more often than not, wrasse fish and shrimp. They provide ‘cleaning services’ to animals that need it – called what else but, the clients. Larger creatures like turtles, mantas, sharks (in deeper waters) and smaller fish (parrotfish, pufferfish, needlefish, groupers, surgeonfish) stop by to get ectoparasites (annoying tiny bugs that make their homes in unreachable spots on client bodies) and dead skin eaten off by cleaners from their bodies, gills, fins and carapaces.

Simply put, the cleaners get food, the clients get cleaned.

Road signs in the deep

Cleaning stations exist across different depths and topographies, at 5 metres or as deep at 100 metres. How do animals, traversing through this vast big blue, know that these services exist close by? Does the reef provide the necessary roadside signage?

“They probably use a range of cues to get to them,” said marine biologist Shreya Yadav. “Since stations can stay in the same spot for a while, I would think resident fish know about them. Roving species probably spot them while they’re swimming past, and stop if they need to. I’ve noticed quite a few on the reef slope, where they are visible to many passing schools of fish.”

Umeed Mistry, photographer and scuba diver, said, “Residents might know where it is, but many pelagic rays/sharks also visit these places. These stations attract creatures from many parts of the reef, plus many animals on long distance migrations also stop at convenient stations to be cleaned. In fact, there are other kinds of cleaning as well, where herbivorous fish eat algae off other animals; and makeshift stations around floating debris where congregating fish provide the same service in the open ocean for creatures coming up from the deep.”

Biologists are also using cleaning station sites to further conservation data for some species. For example, mantas spend a fair bit of daylight-hour time (40 percent) at a cleaning station, because cleaners sleep during the night. In a recent paper, scientists suggest that “assuming that both cleaning and feeding are crucial for the mantas’ survival, there is probably a trade-off between the two activities. A mantas’ decision to visit a cleaning station is probably dictated by (1) feeding effectiveness (i.e., plankton availability, distribution, and concentration); and (2) cleaning effectiveness (i.e., cleaner fish activity hours and service quality).” 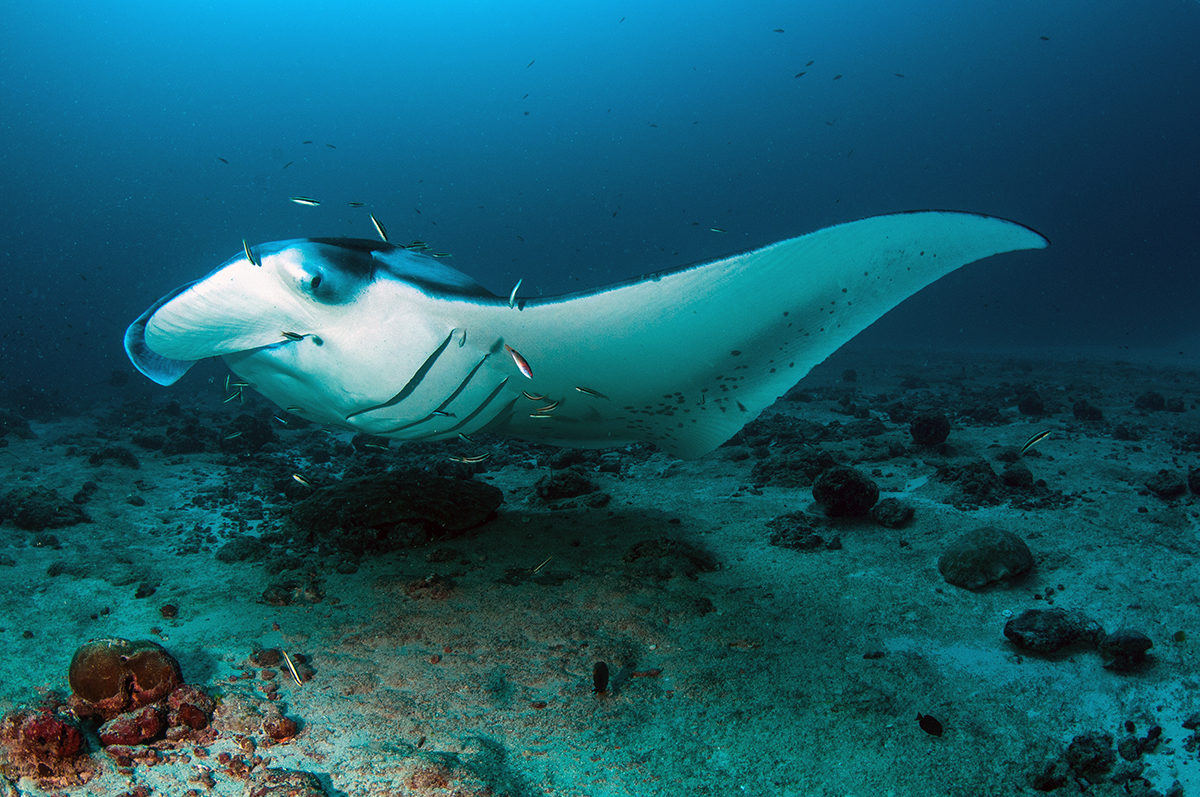 A manta ray visits a cleaning station off a deeper reef slope. Many larger creatures that are not residents to a particular reef will make use of a cleaning station in the area, sometimes on a regular basis. This phenomenon has contributed to divers and snorkelers seeking out cleaning stations in order to be able to sight mantas and sharks. Photo by Umeed Mistry.

The communication between creatures at the stations is effective and simple, yet fascinating; we hardly get very far even with the gift of words. Recognition is key. The said cleaners wear colours that give away their vocation, and clients that are sensitive to similar UV wavelengths would have no trouble finding them and will position themselves in an upright manner to indicate they’d like a ‘wash’.

While they are recognisable easily, even to humans, a study found that fish at cleaning stations prefer blue and yellow colouring. Using theoretical vision models, the paper found that to clients, “blue is the most spectrally contrasting colour against coral reef backgrounds, whereas yellow is most contrasting against blue water backgrounds or against black lateral stripes.” Blue in cleaner fish patters attracted more fish to the cleaning stations. The conspicuous colour combinations in the cleaning stations were “likely to underpin the success of the cleaner-client relationship on the reef.”

Mistry has noticed that cleaners use a slightly odd way to swim towards the clients, almost like a hiccupping motion. His documentation (video below) reveals so many tiny exchanges between different creatures – client fish queues (more orderly than any human ones), brighter colour changes in the clients to help cleaners spot the darker parasites on the skin, fish waiting in a strange upright position to communicate it’s ready to be cleaned.

Cleaners will sometimes even work on each other. “A cleaning station is the most vibrant, busy part of a reef, where so many different creatures gather,” he said. “This activity stops the spread of disease, preserves the health of creatures, and by consequence, the entire ecosystem. It’s a win-win for all creatures and a beautiful, almost artistic occurrence to watch. If I see one, I’ll know that I would be spending a fair bit of time just there.”

A cleaning station seems to also play a leveller of sorts, between predator and prey. Yadav observed that, “Often, you see many different species of reef fish (groupers, snappers, goatfish) that are normally quite wary around each other go to the same cleaning station – and they do appear to adopt a non-aggressive attitude towards each other when they’re there.”

Of course, in line with any trade, there are moments of opportunistic behaviour (a.k.a cheating) in this case. While the cleaners usually enjoy immunity, the occasional client will devour the cleaner after the job is done. And on the other hand, there are the cheaters, the bluestriped fangblennies that mimic cleaner wrasses and actually eat chunks of tissue when the client stops for a clean.

“Some animals like large groupers, that sit with the mouths open for cleaners to pick their teeth, are known to eat these cleaners, and the latter also slyly bite fish when they are done cleaning, which could either be for added nutrition or just to let them know the service is over; I’d like to think it’s the second reason!,” said marine biologist Tanmay Wagh, who has been studying coral reefs for the last three years, predominantly in the Andaman Islands and in Goa. 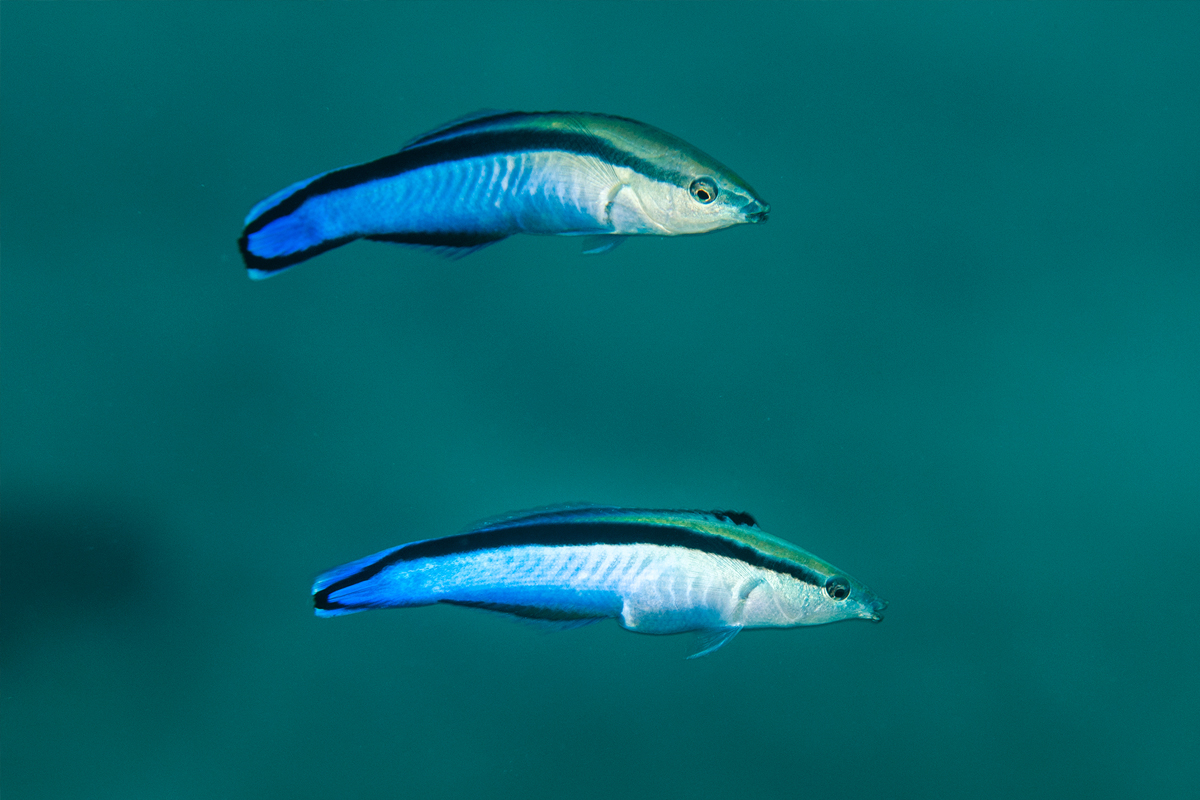 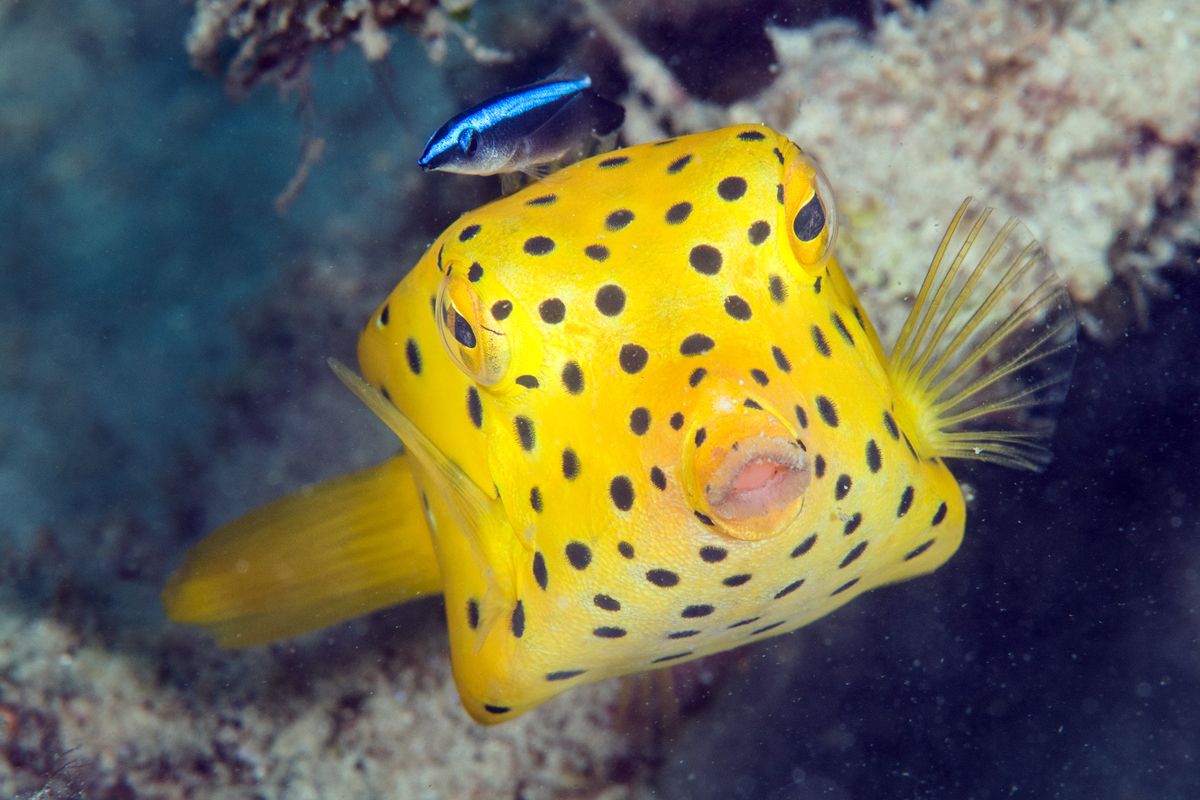 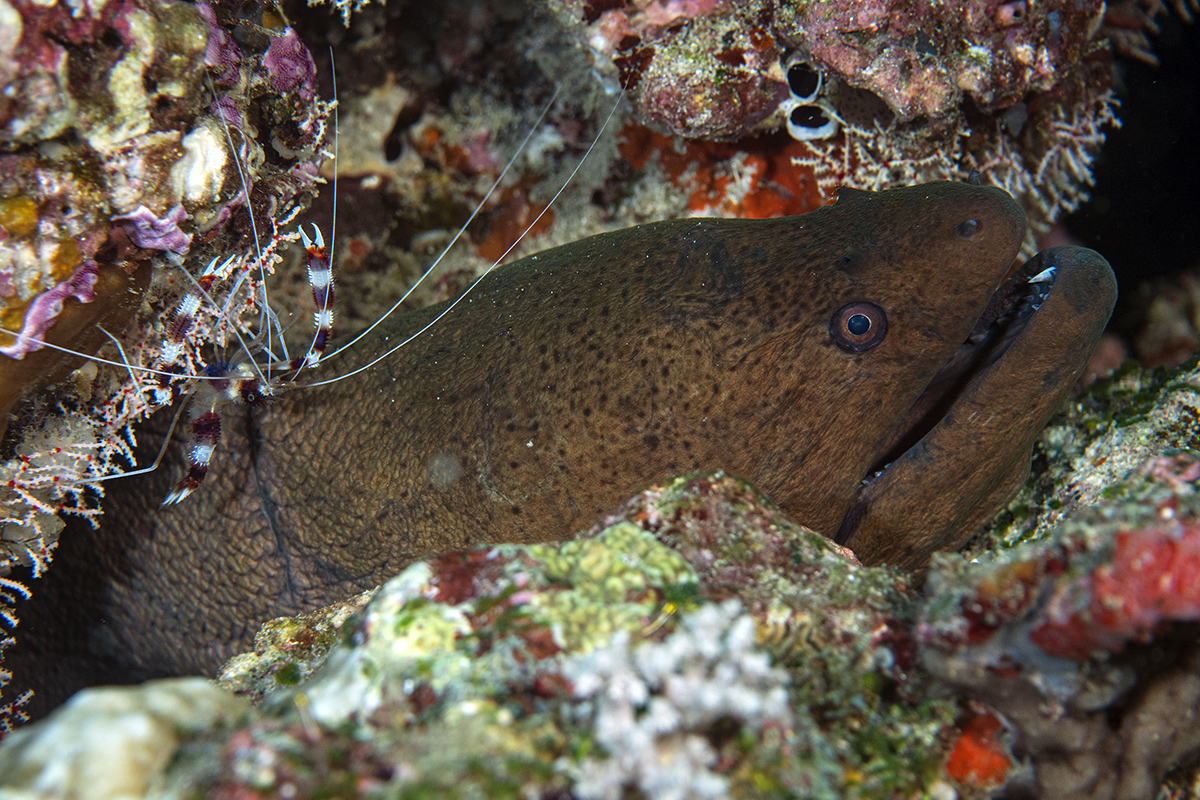 If you chance upon a cleaning station on your dives, it is entirely likely that cleaners will come to investigate if you stay still long enough or in some bizarre cases if you sit with your mouth open. More than one diver has had their teeth (yes) cleaned by wrasses.

Chetana Purushotham, a marine educator at DiveIndia recalls having her scabs being picked on a dive. “A cleaner wrasse once ripped off my perfectly healing wound, which had grown a beautiful scab. I didn’t realise that it was picking at my scab until I felt the pain at the rip, and noticed small waves of green fluid oozing out of my knee. It took me a while to understand that that was the colour of my blood 30 metres deep!”

Cleaning stations are fascinating stops for divers, snorkelers and photographers. You’ll see things that you wouldn’t in other parts of a reef, which in itself is an awe-inspiring ecosystem. “I always thought of reefs as these calm, serene, peaceful environs – schools of fish gliding around not bothered by divers,” says Wagh. “But observe a damselfish territory for long and that changes. They’re chasing fish, getting chased, almost playing hide and seek, guarding their eggs. A reef has so many unique revelations underlining how unbelievably complex yet fascinating these habitats are.”

That’s true. The ocean is a colossal mystery, with extreme temperatures, alien creatures and when it comes to humans, porous yet robust boundaries. We dive in only at our own risk, helplessly drawn to a civilisation that survives and thrives entirely without us, so much so that we have to carry our own oxygen to even make a tiny foray into its plummeting depths.

In that, these small windows into their lives, which seem even minutely relatable to our own, just help fuel an empathy towards that life, which at other times seems so very inaccessible. 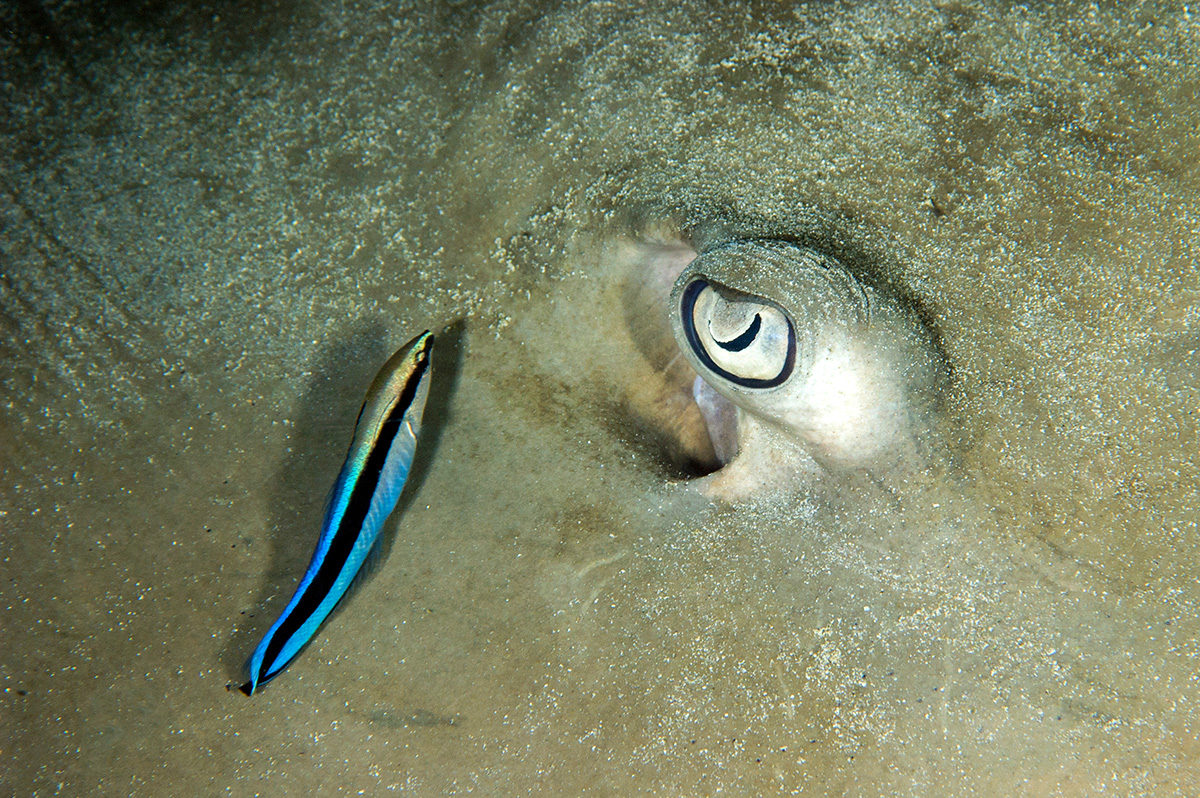 A cleaner wrasse investigates the patch of skin around the eye of a stingray. Cleaners offer their services to a whole variety of reef animals. Photo by Umeed Mistry.

Banner image: Many cleaners will often venture into the mouths of their clients. In most cases, they enjoy immunity for the service they provide. Some clients, however, will make a quick snack of their cleaners – this has been observed with certain species of groupers.