Can humans and elephants cohabit in Kodagu?

Part 1: Humans and elephants tussle for space in Kodagu

It’s 6 a.m. at the Maldare elephant crossing in the Kodagu district of Karnataka. The Rapid Response Team (RRT) is on high alert. Elephants are expected to cross — from the estates to the forest — anytime between 6 and 9 a.m. The team has to be ready for any untoward incidents resulting from human and elephant interactions. Just the other day, some visitors taunted the elephants and the enraged elephants refused to go into the forest, choosing instead to do a show of strength in town.

“Elephants have been crossing this road every day for 25-30 years now,” informed Pradeep of RRT. Morning conversations in the town revolve around elephants. Despite the regularity, nobody wants to leave anything to chance. Motorists accelerate for the 50-metre stretch of the road that’s part of the designated crossing. Except for some young men, people move about in groups near the crossing, hoping, perhaps, that there’s safety in numbers.

Children who go to the village school adjacent to the crossing wait for their friends to join to form small groups and make a dash for the other side. Past incidents have even children on high alert. Chandan (11) of Bittangala in Virajpet taluk was on his way to school through an estate when he was attacked by an elephant who flung him to the field nearby. He sustained injuries on his head and internal organs like kidneys and stomach.

Ananda Kumar, a wildlife scientist at the Nature Conservation Foundation said that it is time human-elephant conflict is assigned the importance of a “natural calamity”. “It is unfair to expect the forest department to do everything and take all the responsibility,” he said.

Forest department at sea, say they do everything they can

Kodagu farmers live in constant fear of the animal but there is no animosity towards the gentle giants. The farmers have a long-standing relationship with the wild and have been culturally attuned to live in harmony with nature. Their anger is often reserved for the forest department which, they believe, is not doing enough to protect them.

The 1998 study on Elephant-human conflict in Kodagu—Distribution patterns, people’s perceptions and mitigation methods surveyed people’s perceptions about the crop-raiding by elephants and found that a good number of affected people believe that elephants have a right to live despite crop damages. While elephant-proof trenches (EPTs) and translocation of problematic elephants as solutions received maximum support from farmers, culling or selective killing was supported only by 19 percent of farmers while a majority, 81 percent believed that elephants should not be killed by humans. The concept of cooperative efforts by farmers and forest department to find a solution though was received with skepticism, indicating that the local population lacked faith in the forest department, something that holds true even today

Forest department officials say that they do what they can and are always on their toes. Efforts are on to raise the Rs. 0.5 million, the compensation amount for loss of life, to Rs. 1 million. The ex gratia for losses is calculated based on the losses assessed by forest staff and at the rates sanctioned by a 2016 government order and is paid to the individual beneficiary, informed deputy conservator of forests (DCF) Virajpet, Maria Christu Raja.

In Kodagu, the situation has gone awry with abject mismanagement at various levels, note experts. “We need to look at elephant menace as a symptom of a deeper malice which is habitat degradation. Instead, we are focused on species management,” said Col. Muthanna of Coorg Wildlife Society, an NGO working towards preserving Kodagu’s biodiversity.

Ecologist, Raman Sukumar of the Indian Institute of Science (IISc) believes in finding effective solutions like strengthening barriers and elephant corridors. Ananda, however, said that the idea of barriers come from our misplaced idea that elephants should stay within protected areas. “This is not a viable option. Elephants have to move around and will find a way around obstacles because they are intelligent. We need to see how we can cohabit,” said Ananda.

Ananda and his colleagues have successfully developed and implemented early warning systems in Valparai in Tamil Nadu and Hassan district in Karnataka. Since the landscape mosaic of Kodagu is similar to that of Hassan, he believes that the Hassan experiment can be tried in Kodagu. An early warning system of SMS alerts through mobile phones was implemented in Hassan district with local support. The SMS alert system was combined with automated voice calls and LED lights and digital display boards were fixed at crucial conflict points. This was done across an area of 620 sq km with 220 villages visited regularly by 40 elephants.

“In the last 12 months of implementing this, no death has been reported from the monitored villages where an average of five cases was reported per year from 2010-2017,” he says.

Read more: Reducing human-elephant conflict one SMS at a time

Right now, the forest department has put radio collars around some elephant cows and is tracking the herds’ movements through an app. There are also regular efforts to create and maintain EPTs, solar fences, tentacle fences and rail barricades. In Srimangala range, there are 32 km of EPT, 64 km of solar fencing and tentacle fences are put for 3 km. In Somwarpet range 40 km of EPT has been dug up and 8 km of tentacle fencing apart from rail barricades for 10 km, according to Somwarpet RFO Lakshmikant N.

The Coffee Research Substation in Chettalli is in talks with Kerala Forest Research Institute (KFRI) in Peechi to install honeybee fences near the sub-station since they have elephants visiting Chettalli from the nearby forest. “We have made a survey of the area and have realised that honeybee fence is a method that can be effectively adopted in Chettalli since they work as a deterrent to elephants,” said former research coordinator of KFRI, E.A. Jayson.

Human-elephant conflict (HEC) is the result of decades of mismanagement and cannot be resolved overnight. As DCF Raja said, “HEC is not an important issue politically. Mitigation is thus largely left to the divisional level officers and frontline staff. Presently, MoEFCC is working on a new national action plan on human-wildlife conflict mitigation. Once this is available, some of the limiting factors of the state government with respect to population management of conflict animals, rescue and rehabilitation capacities, etc. will receive more focus as a mitigation option. Though we are aware and understand the struggle of the public and elephants, there are no simple solutions.”

However, the  situation could get more complex since the government is mulling more mega infrastructures like rail lines and national highways through forests in Kodagu. 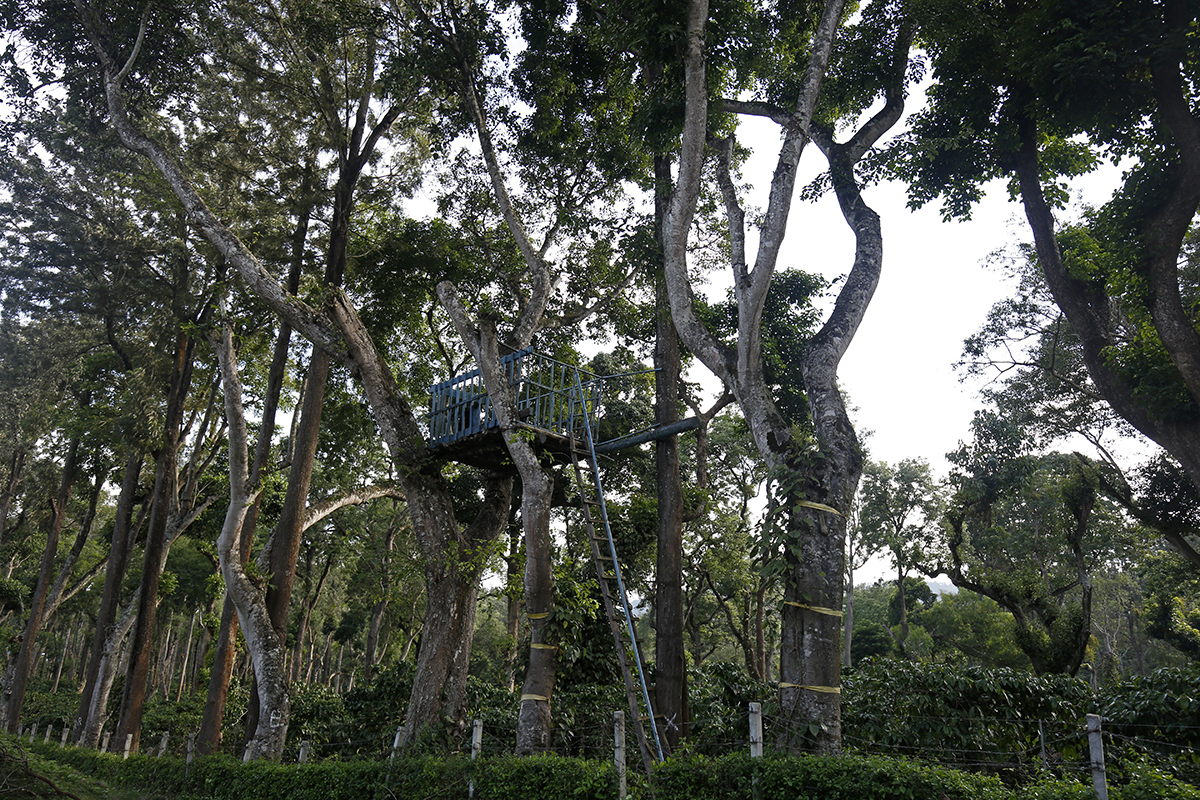 A watchtower to keep track of elephant movements inside a coffee estate in Kodagu. Photo by Abhishek N. Chinnappa.

Banner image: An elephant calf inside an estate in Somwarpet, Kodagu. Photo by Abhishek N. Chinnappa.