Environment ministry unlocked many protected areas during the lockdown

There is a common thread between Dehing Patkai Elephant Reserve in Assam, Rajaji National Park in Uttarakhand, Bhagwan Mahavir Wildlife Sanctuary and Mollem National Park in Goa. While India stayed home during the lockdown, these protected areas were either being slowly unlocked or prepared to be unlocked for human activities and development projects. A safe haven for biodiversity and wildlife, India’s protected areas are losing to the environment ministry’s clearance spree where coal mining, road construction, and other projects are being approved within these ecologically sensitive areas.

For instance, the Dehing Patkai Elephant Reserve rainforest in Assam, which includes the Dehing Patkai Wildlife Sanctuary (DPWLS), was recently at the centre of a controversy over illegal coal mining in a section of the elephant reserve that has a sizable population of elephants. The controversy sparked viral virtual movements on social media under hashtags #SaveDehingPatkai and #ImDehingPatkai bolstered by art and music. Raging protests have temporarily stalled mining operations but its future remains uncertain.

The elephant reserve spreads over 57,500 hectares (575 square kilometres) of forest areas stretches across Tinsukia, Dibrugarh and Sivasagar districts of Assam. The DPWLS spans 11,100 hectares (111.19 sq. km.) of the rainforest. The reserve also includes the Saleki Proposed Reserve Forest (PRF) and other patches. The rainforest is home to several endangered and rare species such as the Malaysian sun bear, Hoolock gibbon, and pig-tailed macaques among others. The proposed area is on a steep hill slope that is part of the Dehing Patkai Elephant reserve adjoining good forest area in the neighbouring state of Arunachal Pradesh which includes Deomali Elephant Reserve with a sizeable population of elephants.

In April 2020, during the COVID-19 lockdown, the standing committee of the National Board of Wildlife (NBWL), chaired by Environment Minister Prakash Javadekar, recommended that a portion of the PRF (98.59 hectares) be used for open cast coal mining by North Eastern Coalfields (NEC), a unit of Coal India Limited in Assam. Although the mining was already on in 57 hectares of the reserve forest, the April 2020 recommendation paved the way for open cast mining in an additional 41 hectares, which, the proposal said, was “unbroken.” However, information obtained under the Right to Information by activist Rohit Choudhury, reveals that mining was already being carried out in the claimed “unbroken” 41 hectares. The November 25, 2019, site inspection report accessed under the RTI by Choudhury states that “9 hectares area of 41 hectares has already been broken up and operated and another 7 hectares area has been cleared up.”

According to the site inspection report, four square miles (1,036 hectares) area was leased out to Coal India Limited (CIL) from 1973 to 2003. The 98.59 hectares forest land being discussed in this case is part of that lease area. On expiry of the lease, CIL applied for renewal of lease/diversion in 2012. Prior to the site visit, CIL officials asserted that “they have already broken up and are still carrying out coal mining operations in 57.20 hectares” of the total project area (98.59 hectares) “without obtaining mandatory prior approval from the Centre under the Forest Conservation (1980) Act (FCA) for the project,” noted the inspection report.

The state government (forest department) was aware that the operations and coal mining were carried out in gross violation of Assam Forest Regulation, 1981, and the FCA, the site inspection report said. “Illegal coal mining has been going since 2003. The Assam government/forest department has totally failed in protecting the natural resources of the state. How can it have gone on for 16 years?” Choudhury told Mongabay-India.

Art for protest against coal mining at Dehing Patkai 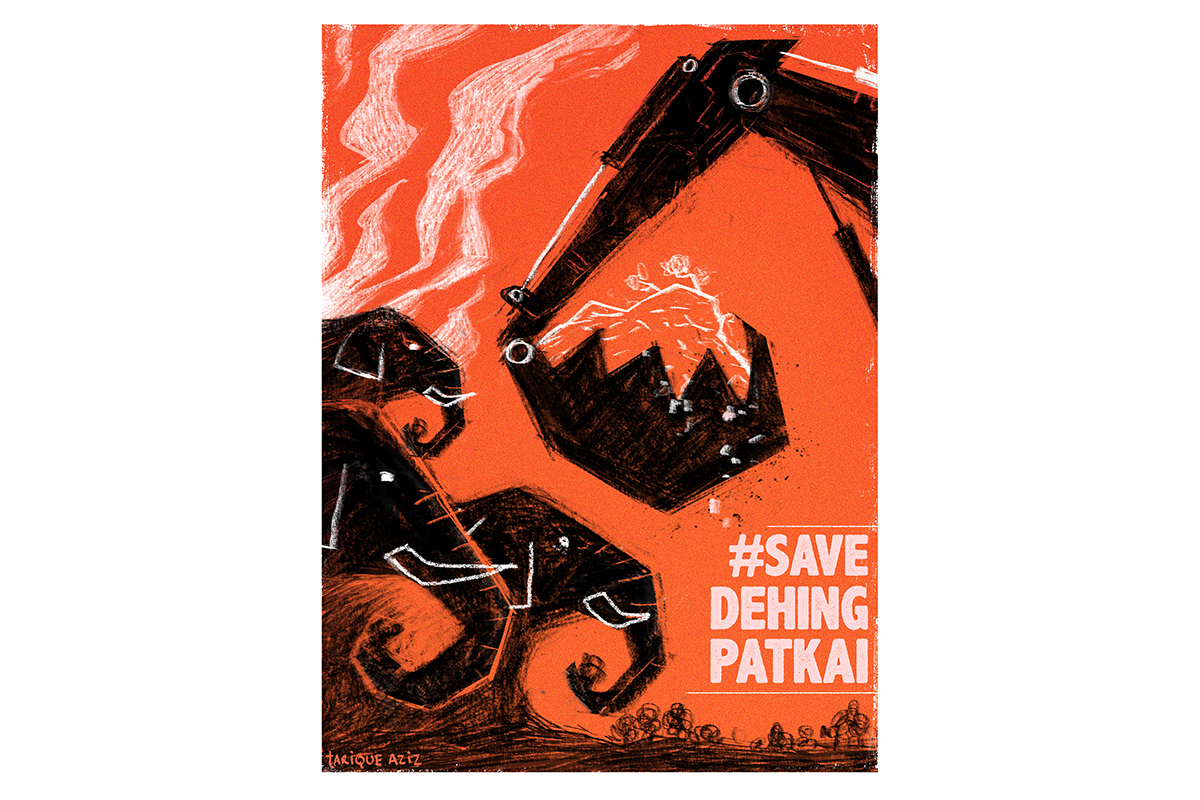 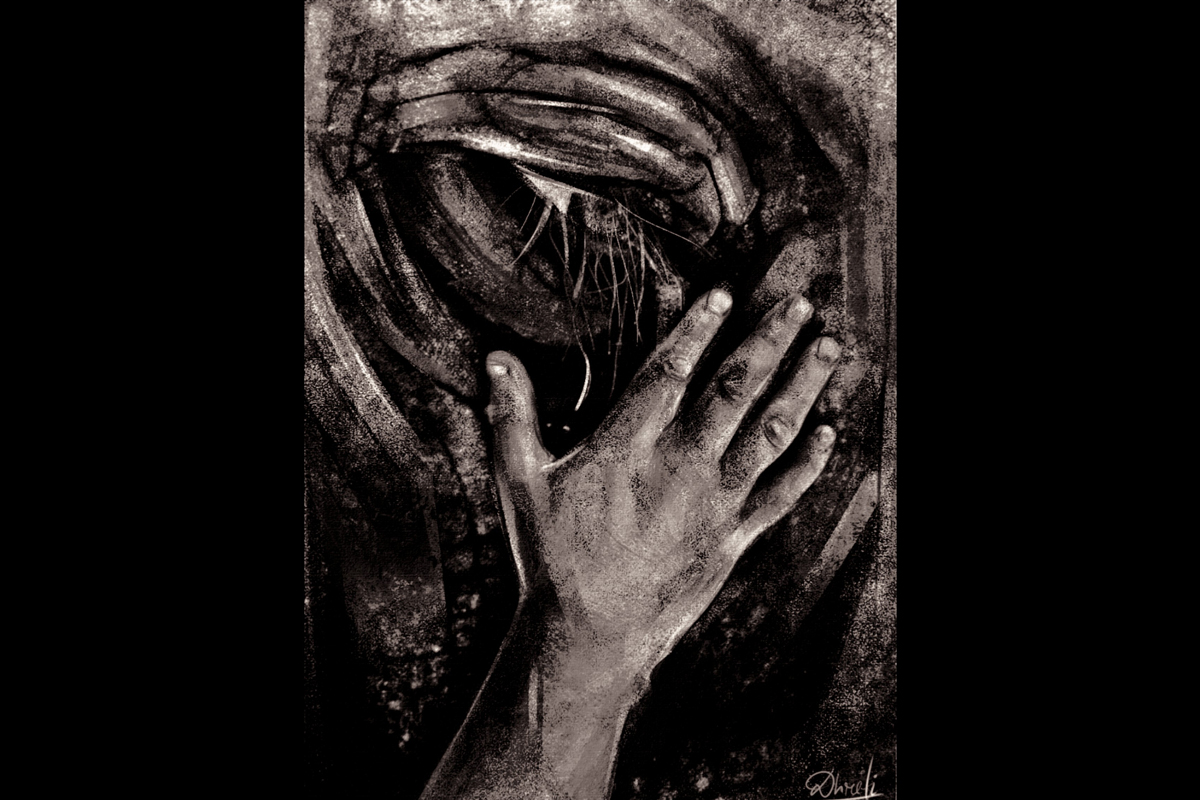 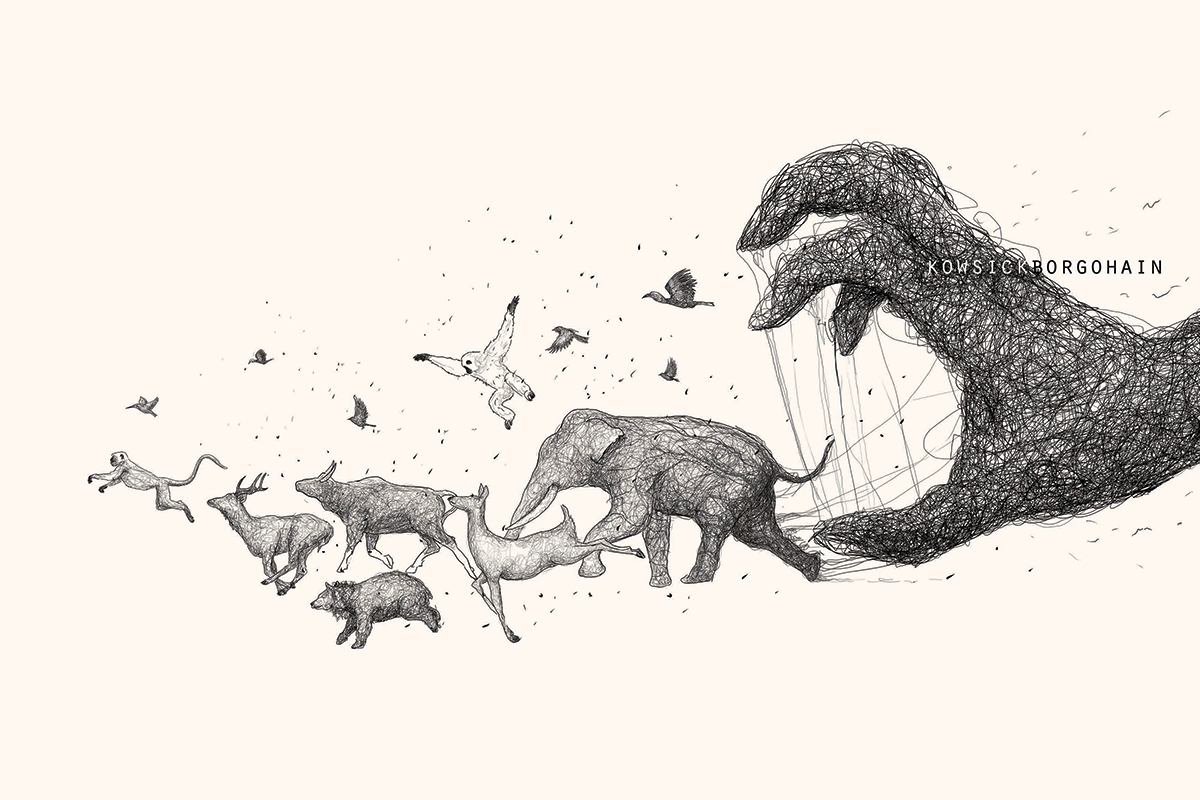 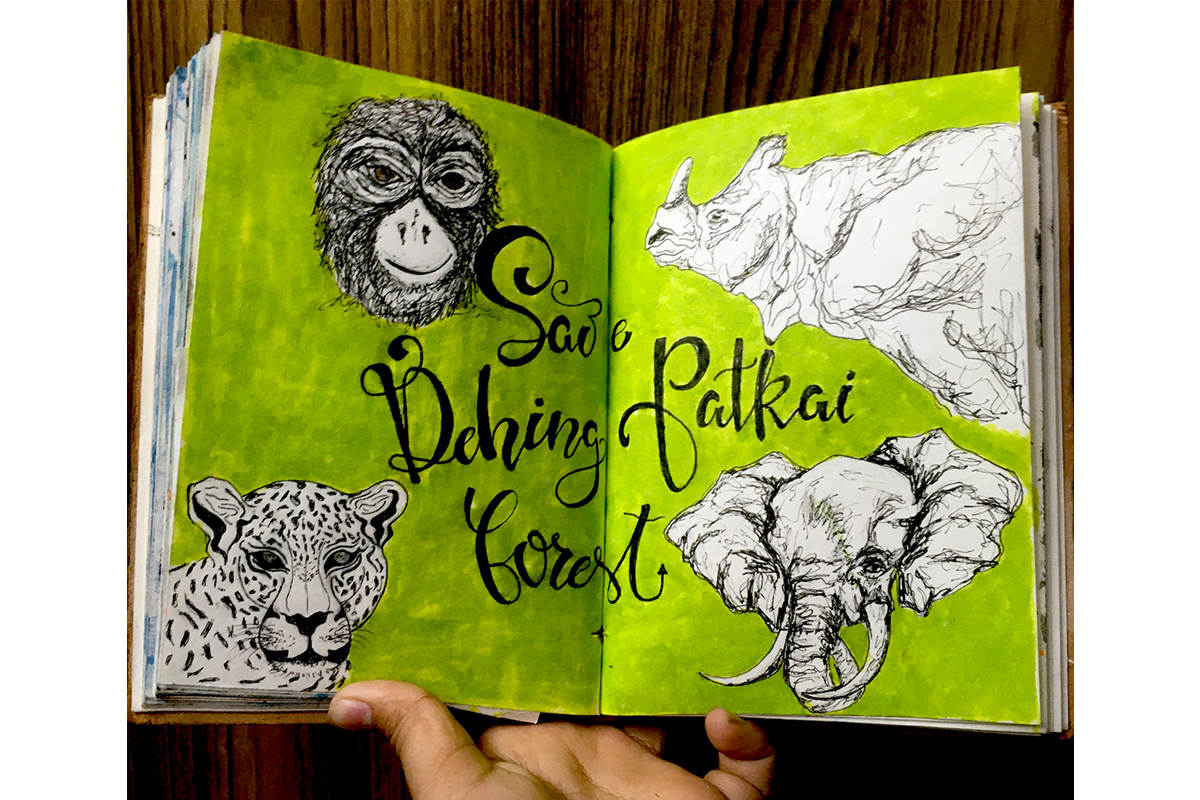 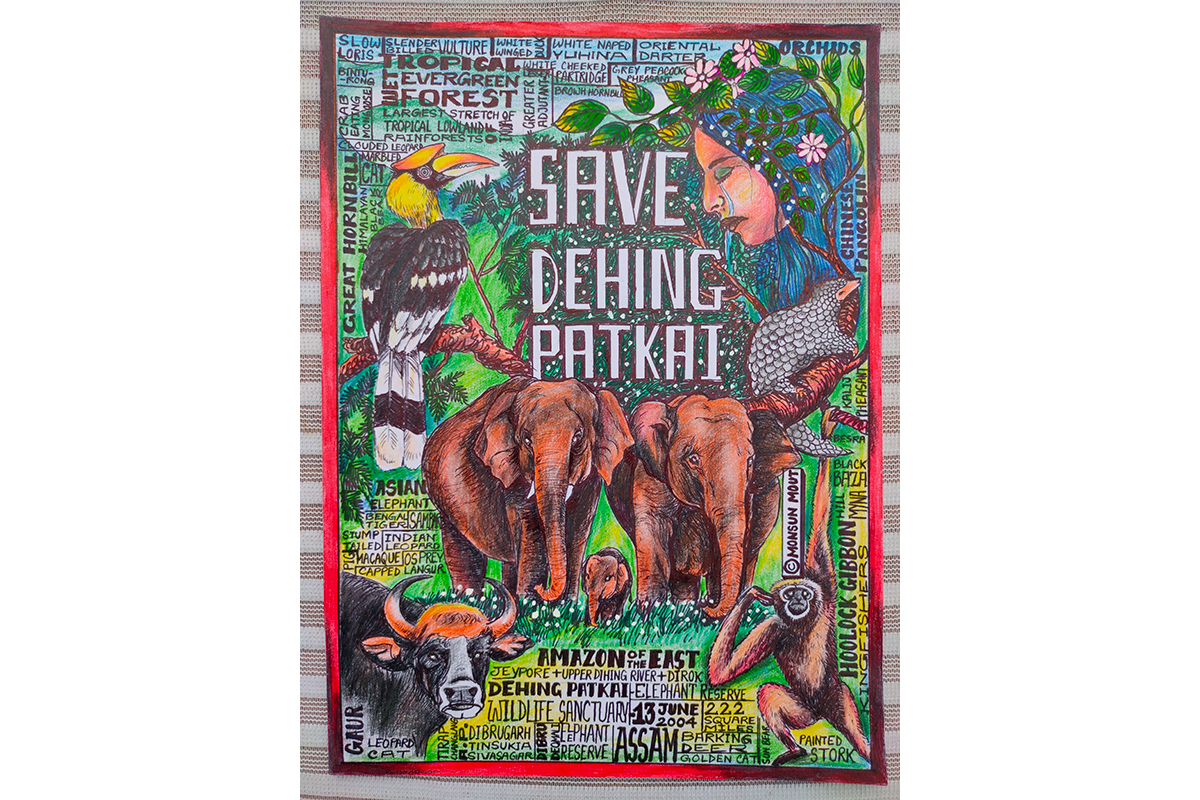 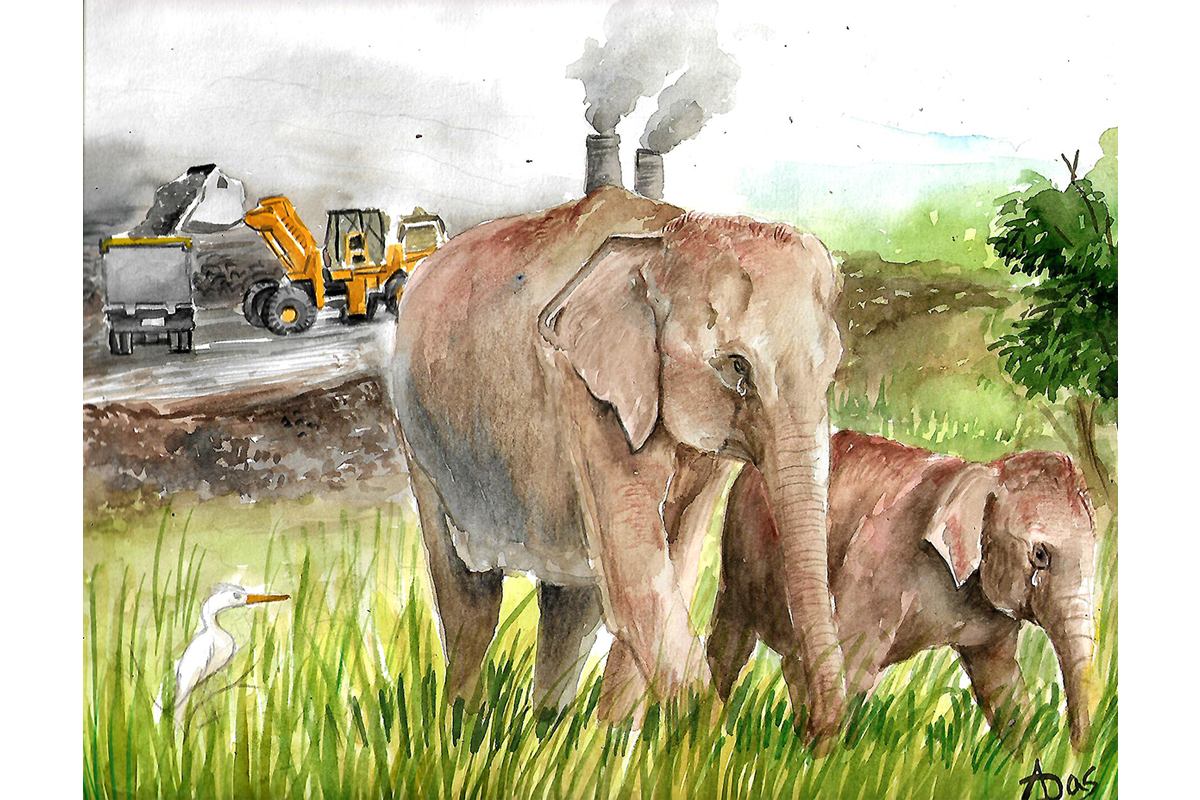 “We have to reduce our dependency on coal mining for the livelihood of the communities that are in the elephant reserve. As much as possible we must maintain large forest areas, especially for species such as elephants that need large tracts for movement. Priority must be given to large forest tracts but instead what happens is we fragment habitats and then we think of corridors to connect,” ecologist Udayan Borthakur of NGO Aaranyak told Mongabay-India.

Dehing Patkai rainforest is the largest tropical evergreen rainforest in northeast India and is often referred to as “Amazon of the East” with its large area and the thick forests. In northeast India rainforests are found in the Assam Valley, the foothills of the eastern Himalayas, the lower parts of the Naga Hills, Meghalaya, Mizoram, and Manipur, where the rainfall exceeds 2300 millimetres per annum. Both tropical evergreen and semi-evergreen types of rainforests occur in this region. The rainforests of Assam were subjected to large scale commercial timber collection from the colonial period until the early twentieth century that resulted in the shrinkage of the forests.

Close on the heels of the outrage over Dehing Patkai coal mining, comes another controversy and protest movement over the proposal to denotify a section of the Vedanthangal Bird Sanctuary, which is the oldest breeding waterbird reserve in southern India, located 85 km south-west of Chennai city in Tamil Nadu. It is an old heronry that dates back to two centuries, where, as many as 17 species of colonial waterbirds breed annually. This mass colonial breeding attracts a lot of avian predators, and as many as 11 species of raptors have been recorded at this site.

In India, there are 870 protected areas including wildlife sanctuaries, national parks, conservation reserves, and community reserves together accounting for 5.02 percent of India’s total geographical area.

The case of Dehing Patkai is, however, not a lone case of protected areas being opened up. In the same April 2020 meeting and earlier in the December 2019 meeting, the standing committee of the NBWL cleared three projects which sought diversion of forest land from the Bhagwan Mahavir Wildlife Sanctuary and Mollem National Park, which together constitute the largest protected area in Goa.

In the April 2020 meeting, the NBWL’s standing committee cleared a proposal for use of 85.50 hectares land within the protected area for laying of power transmission line and 32.085 hectares of forest land for widening of existing National Highway 4A from the Bhagwan Mahavir Wildlife Sanctuary and Mollem National Park. Prior to this, in December 2019, the committee had cleared a proposal for diverting 16.514 hectares of forest land from this area for doubling of the existing railway line from Kulem to Madgoan.

The Bhagwan Mahavir Wildlife Sanctuary is located in Mollem, Goa, and is spread across the area of 24000 hectares (240 sq km). It is the largest of Goa’s four protected wildlife areas and contains within it the Mollem National Park. This protected area has “thick forest-clad slopes of the Western Ghats” that are considered “rich in wildlife and a paradise for bird watchers.”

Following these clearances, on June 4, 2020, a group of 149 scientists, academicians, conservationists, artists, allied professionals as well as concerned citizens wrote to India’s environment minister Prakash Javadekar stating that the Bhagwan Mahaveer Wildlife Sanctuary and Mollem National Park in Goa together is a “treasure trove of flora and fauna, and is part of a larger contiguous forest and an important tiger corridor between Goa and the adjoining Kali Tiger Reserve in Karnataka.”

They expressed their concerns about the planned projects and stated that the two protected areas together constitute the largest protected area in Goa. They stressed that all three projects require diversion of forest land from this single protected area where direct sightings and camera trapping by the forest department have revealed the presence of protected species like tiger, dhole, mouse deer, pangolin, small-clawed otters and four-horned antelope. They said that the protected area is also home to more than 721 plant species, 235 bird species, 219 butterfly species, 80 odonate species, 70 mammal species, 75 ant species, 45 reptile species, 44 fish species, 43 fungi species, 27 amphibian species, 24 orchid species, and 18 species of lichens.

“Tree cavity-nesting birds such as hornbills such as the great hornbill which is classified as vulnerable and Malabar pied hornbill which is classified as near threatened are also found here. In addition, there are 18 bird species that are endemic to the Western Ghats and seven bird species that are of high conservation concern found here (according to the State of India’s Birds, 2020),” the letter said.

The group said in the letter that besides the flora and fauna, these forests have freshwater streams that feed the main rivers including Goa’s lifeline, river Mandovi. They stressed that these projects will increase disturbance to the wildlife and damage these protected areas irreversibly.

“The road and the railway track will create stark barriers that may lead to a rise in wild animal mortality. Movement of arboreal mammals, reptiles, fish, and amphibians is likely to be hindered by these barriers. The laying of the transmission line would need the felling of large old-growth trees along its course. These forests that have existed for thousands of years are irreplaceable. Direct loss of biodiversity and the far-reaching impacts of habitat fragmentation will reduce ecosystem stability and decrease forest resilience,” said the activists and urged Javadekar to “reconsider these approvals” to safeguard Goa’s biodiversity and ecological security.

Nandini Velho, an independent researcher, and one of the signatories of the letter to Javadekar, said, “In my home state of Goa three infrastructure projects in one protected area sums up a wide-spread concern for the entire country.”

“A virtual meeting at the NBWL where members said they couldn’t access maps while making decisions, but it was considered tweet-worthy by the country’s environment minister, is a telling tale of the level of importance given to wildlife areas,” Velho told Mongabay-India, referring to the social media post by Javadekar where he announced giving wildlife clearance to a number of projects.

Chintan Sheth, another independent researcher, said with India’s poor handling of ecologically sensitive areas “we are not only putting our future in danger but we are also losing out on our past in the form of the rich geological history.”

“Whether it is Nagarjunsagar-Srisailam in Andhra Pradesh, Amrabad tiger reserve in Telangana or the coal-bearing areas of central India, there are many sites that are important from a geological perspective. By losing them and not protecting them we are losing our landscapes with rich paleontological and archaeological history. We are losing our heritage,” Sheth told Mongabay-India, adding that there is now a pattern to the practice of the union environment ministry allowing developmental projects in protected areas. “This has happened in the past and they continue to put the protected areas under huge anthropological pressure,” he said.

During the lockdown, the pressure for clearance on human activities in protected areas did not seem to reduce. For instance, for the Kumbh festival scheduled to take place in Haridwar (Uttarakhand) from January 2021, the Uttarakhand government is eyeing to temporarily use at least 778 hectares area of the Rajaji National Park (RNP), which is home to rich biodiversity.

Even during COVID-19 lockdown, while field visits and other required activities were not possible, the environment ministry’s expert panels on wildlife, forest and environment met via video conferencing and gave environmental clearance for projects. In some cases, the expert panels considered a project for approval or rejection in less than 10 minutes.

“The COVID-19 pandemic has opened people’s eyes to the human-induced threats to nature and how these threats are connected to pandemics. Social media has helped mobilised protests and a large section of people are aware of the extent of degradation of nature and the consequences of opening up wildlife habitats for human activities,” said Udayan Borthakur.

For instance, in April 2020, when the expert forest panel of the environment ministry was considering giving forest clearance to diverting pristine forests in Arunachal Pradesh for Etalin hydropower project, experts, scientists, environmentalists and activists from across the country opposed the project.

For Etalin, 26 scientists from 14 institutions across India peer-reviewed the Wildlife Conservation Plan, prepared by the Wildlife Institute of India, and found considerable deficiencies. The clearance to the project was deferred for the time.

Subsequently, a group of 291 scientists, experts, environmentalists, activists and former members of the standing committee of the NBWL had written to Javadekar expressing concern over the forest, wildlife and environment clearances being recommended by ministry’s expert panels in their meetings via video conference during the COVID-19 lockdown.