A nondescript village in Malavalli taluk in Mandya district of Karnataka, Dasanadoddi, is a little over 100 km from the capital city of Bengaluru. With narrow tarred roads snaking through every settlement in the village, Dasanadoddi, situated at the base of a picturesque hillock, Kundini Parvata or Kundur Betta, is not the regular hinterland. There is no shortage of power, water or smartphones here. Dasanadoddi received national attention when Prime Minister Narendra Modi, in his weekly Mann ki Baat, a programme aired on All India Radio, mentioned the good work of a resident shepherd, “pond man” Kalmane Kaamegowda.

He has dug 16 ponds on Kundur Betta and has become a wetland champion of sorts, unbeknownst to his knowledge. He calls himself “Vanapalaka” or the guardian of forests and had a very simple motive in digging these ponds — to make water accessible to the birds and animals that have made the hillock their home as well as the visiting ones. He says there are wild animals like bears, leopards, deer, foxes and more on the hill that come for the water in these ponds.

Till a few years ago, before he came to be known as the “pond man”, Kaamegowda was a little-known figure here and was written off as “mad” by villagers. Who else but a crazy person would go around a hill and dig ponds for birds and animals, they would say. Kaamegowda also spent all the money he earned through the sale of his sheep and other means, on digging these ponds. In what could only be termed as a fortunate stroke of serendipity, a few journalists of the local media found his work worth some newsprint. Before he knew it, he had become the talk of the town.

Karnataka Rajyotsava Award or Rajyotsava Prashasti, the second-highest civilian honour of the Karnataka state followed in 2018. By then, Kaamegowda had become a local hero. After the PM mentioned him in the radio programme, media thronged the village, articles were written, praises were sung and loud calls for a Padma Shri for him were made, catapulting Kaamegowda to national fame.

Kaamegowda though, still lives in the single-room shed he shares with his 50 sheep, adjacent to his son’s house. It’s not difficult to get there. Ask anyone in the village where Kaamegowda lives and they will show you the way to his house. Curious feet will follow you there. Some villagers want a picture of you. After all, Kaamegowda’s visitors can’t be ordinary.

Ponds, trees and a banyan grove

Kaamegowda’s contribution to the environment is not limited to creating ponds. He has planted many trees like the Indian beech tree (honge mara in Kannada), jamun, banyan, etc. around these ponds which the forest department has now designated as a park. He has also created a three-acre banyan grove on the hillock, a Section 4 forest area, at the behest of the forest department.

Kaamegowda’s efforts are done without any monetary help from anyone. “I have used my earnings to do these things. I have also spent Rs. 14 lakh (Rs. 1.4 million) from my son’s earnings,” he says. He has no idea how much he has spent on these works so far. “If the government has to do what I have done in the last 40 years, they will definitely have to spend around Rs. one crore (Rs. 10 million),” he says as a matter of fact.

By his own admission, Kaamegowda is 86 years old, even though his official records put his age somewhere around 70.

His love for birds and animals and his interest in digging ponds started early in his life. His father, a shepherd, had dug two ponds on the hillock, one of which is still there. “Some Lingayats (people belonging to a dominant caste community) closed the other pond saying this place did not belong to us but to the forest department,” he says.

As a teenage boy, Kaamegowda followed his father and learned the ropes. He learned to identify moisture on the ground by the look of it and would dig pits with his friends as a playtime activity. Once he grew up and took pond digging seriously, he had to rely on limited tools like spade, shovels, pickaxe, etc. to create these water structures. He rented JCBs when he could afford them to give some shape, size and structure to the ponds. So close are these ponds to his heart that he has even named them – Krishna, Akshaya, Pooja, etc. 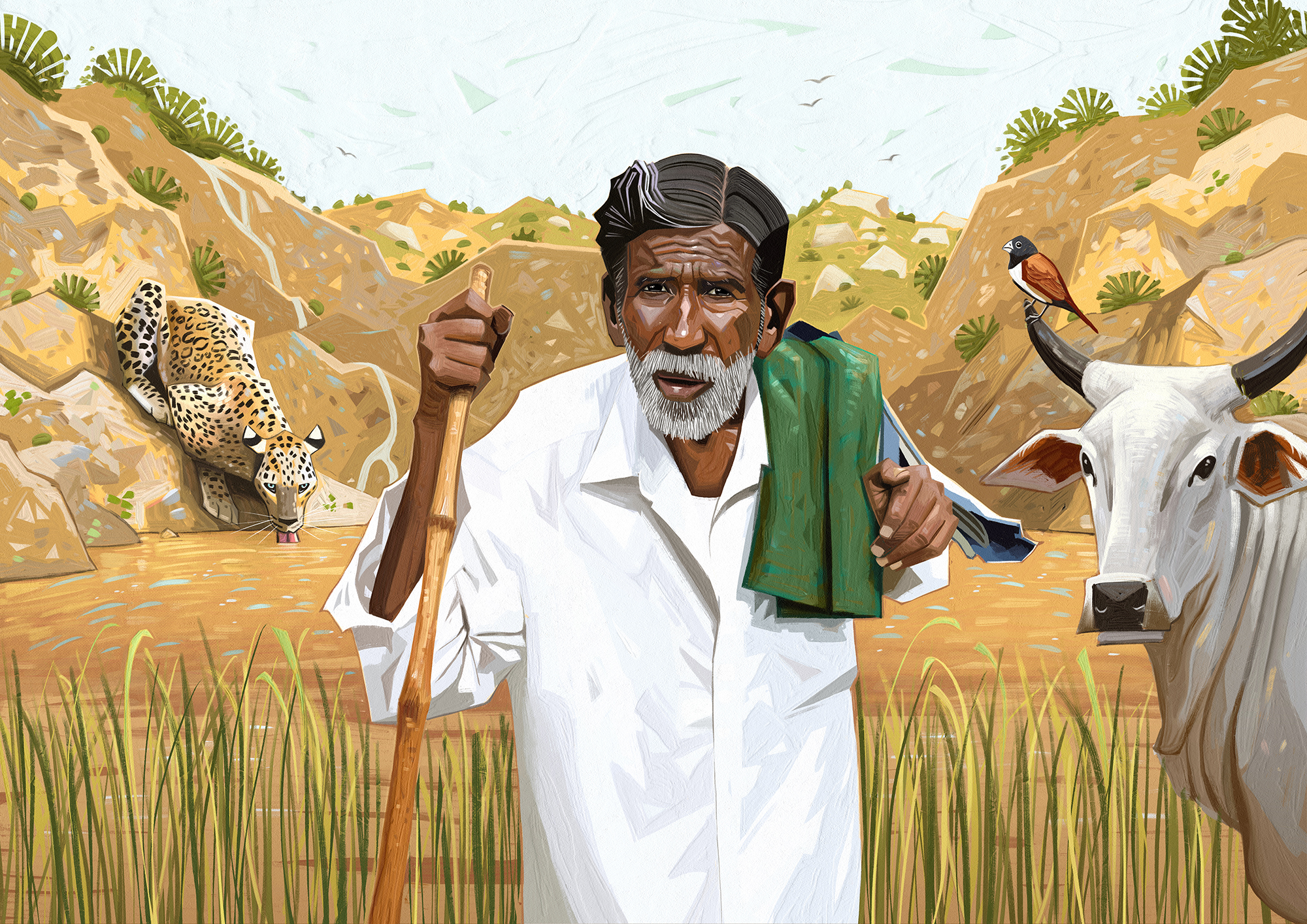 Kalmane Kaamegowda, a shepherd from Mandya, Karnataka, has dug 16 ponds for wild animals and livestock in the last 40 years. Illustration by Krishna Bala Shenoi for Mongabay.

Officials call it a genuine work of environment protection

Deputy Commissioner of Mandya, Venkatesh M.V. says that Kaamegowda’s work is commendable and his administration is determined to encourage such individual initiatives towards environment protection. He says that from the spot inspections he has done around the ponds, he has realised that Kaamegowda’s work is scientific in both its nature and execution. “He has dug these ponds at the base of the hill so the rainwater that runs down can be collected in them. The ponds are also interlinked so no water goes waste,” he says.

It is, however, clear that the name and fame have not changed much of Kaamegowda’s life. He eats and sleeps with his sheep in a tiny shack which is still under construction. He’s nursing a “non-healing ulcer” (according to the medical reports), under his left knee which, from his description, is getting worse. It was reported in the newspaper recently that he was tested positive for COVID-19 which he denies. “Some of the villagers are jealous of my fame and they wanted to malign me,” he says.

This unexpected rise to fame has brought Kaamegowda a handful of detractors in his village. Recently, 70 villagers petitioned the district commissioner, alleging Kaamegowda did not dig any of these ponds and that he only dug some pits. They believe that what Kaamegowda has been doing out of self-interest has been falsely trumpeted as selfless work for the environment by a section of the media.

One of the villagers, Shashikumar, feels that they are pits and not ponds since a pond needs to have certain features like a retaining wall that is missing in them. He alleges, “There used to be a pond from ancient times here which used to be full. But after this man dug up pits here and there, water has stopped flowing into it. It has completely dried up now.” Shashikumar says that Kaamegowda did most of the work after he won the Rajyotsava award and has dug ponds where it can easily be shown off to people.

They also allege that Kaamegowda is treating the ponds and the hill as his own property and creating a nuisance for others by not letting anyone use the ponds or walk there.

Kaamegowda, however, counters the allegation, saying that he would object to people washing their clothes in the ponds or using the water for anything other than drinking or for the livestock since he dug them up for wild animals and birds and he wouldn’t let anyone contaminate them. “There is water in the villages for villagers and their livestock. Where will the wild animals and birds go for water? I have dug up these ponds for them and not humans,” he says. He also believes that the park and the banyan grove should not be visited by people, which is “trespassing”, to which the villagers take strong objection.

The Mandya DC, however, dismisses this dispute as a way of life in most villages. “These are perceptional differences. Most villagers like him and appreciate his work but there is some misunderstanding which we are trying to solve,” he says. Throwing his weight behind Kaamegowda, the DC says he believes Kaamegowda’s work is genuine. As a token of appreciation, his administration is considering building a better house for the Good Samaritan. He has also recommended to the government for a job for one of his family members.

Meanwhile, Kaamegowda continues to drag his injured leg to the hillock everyday to tend to his plants and to oversee the work on his 17th pond.

Illustration by Bengaluru-based Krishna Bala Shenoi, who spends his days making things. His artwork, spanning a variety of styles, has accompanied children’s literature in books produced by esteemed publishing houses.