by Kundan Pandey and Mayank Aggarwal on 24 March 2021

Every year, India, one of the biggest consumers of palm oil in the world, imports billions of rupees worth of this commodity. Over the past few years though, it has been working towards ramping up its own production to save foreign exchange and reduce dependence on import. This, in turn, could also reduce India’s environmental footprint in southeast Asia as India’s growing demand for palm oil is linked to large scale deforestation for oil palm agriculture in Indonesia and Malaysia

The concerns against India’s push for palm oil cultivation is that it will add to the already existing issues of water scarcity as well as trigger the conversion of forests being turned into palm oil plantations. For an economy like India, where the majority of people are dependent on agriculture, the large-scale adoption of palm oil cultivation, which has a long gestation period, can have a huge impact on the economic security of farmers who are already facing water shortage and erratic monsoon.

For instance, G. Rohith, a 30-year-old graduate from Andhra Pradesh, said his grandfather had sown the palm oil crop three years ago but since then his family was consistently losing money. His family’s 6.5-acre farm is in village Pothureddypally in Krishna District, about 50 kilometres from Vijayawada, which is one of Andhra Pradesh’s major cities.

“Thus we decided to pull out. It is better late than never,” Rohith told Mongabay-India.

He explained that his family lost about half a million, Rs. 500,000, over the three years – Rs. 100,000 in the investment they made while about Rs. 400,000 they could have earned had they continued with growing corn for seed companies.

“But many farmers around our fields are continuing with the palm oil crops as the government is supporting with a huge subsidy. We could not. (Another issue is) the groundwater is at a depth of 300-500 feet. Therefore it is surely going to be problematic for many,” he said.

Similar is the story of Romlal Sahu, a farmer from Belhari village of Patan block in Durg district of Chhattisgarh, who planted oil palm in his 0.5-hectare land. He claims that not only did he plant it in his own land but also pioneered oil palm plantation in 65 acres of land in his block. But later left it because it wasn’t financially viable and returned to the traditional paddy and other seasonal crop farming and claimed that most of the other farmers in his district shifted back as well.

Sahu explained that when the new government came into power in the state in 2018, it announced Rs 700 additional cost of paddy along with Rs 1,800 already being given by the central government on every quintal of paddy produce. He said thus a farmer can earn Rs 60,000 just from paddy that too one crop and if he goes for the second crop on the same land his income reaches Rs 100,000.

“On the other hand, if a farmer like me goes for oil palm which needs at least 5-7 years for the first crop, I will need to forgo Rs 700,000 in seven years. And even then there is no guarantee that the crop after seven years will be good and I will get this much amount. There are many plants in Chhattisgarh not giving any yield even after the long wait of eight years,” Sahu lamented.

Solving such issues is crucial for India if it wants to increase the country’s palm oil production and save foreign exchange by reducing the import of edible oils like palm oil.

To reduce the import of edible oils in the country, the government is focussing on increasing the production and productivity of oilseeds and area expansion under oil palm and tree-borne oilseeds for enhancing domestic availability of edible oils.

In 2014-15, it launched the National Mission on Oil Seed and Oil Palm (NMOOP) which was merged with the National Food Security Mission from 2018-19.

The efforts have borne fruits as well. In Dec 2019, India’s Agriculture Minister Narendra Singh Tomar informed parliament that India has consistently increased its palm oil production over the last five years from – 191,510 tonnes in 2014-15 to 278,922 tonnes in 2018-19 – an increase of about 45 percent.

According to the official data, the total palm oil potential area in India is about 1.93 million hectares spread across 19 states but the actual coverage is about 349,000 hectares (upto October 2019) in 16 states. Of that, the approximate fruiting area is 135,000 hectares in eight states.

The government is aware of the constraints in increasing the country’s palm oil production. Some of the main constraints are long gestation period that restricts income flow to farmers for at least 4-5 years, small land-holdings of farmers with limited resources, fluctuation in prices, erratic monsoon leading to the shortage of water, competition from other economically viable crops such as rubber, areca nut, sugarcane, banana, coconut etc.

A senior official of the Andhra Pradesh government, while wishing anonymity, said palm oil crops are being pushed for several years but the issue is that they are being pushed in water-scarce areas instead of being encouraged in areas with enough water availability.

“Palm oil crops are water guzzlers. Period. Moreover, the waiting period for palm oil crops is huge and the remuneration is not as high as farmers want it to be – which ultimately discourages them from not pursuing it,” the official told Mongabay-India.

Another trend that the Andhra Pradesh government official said has been witnessed is that land being used by the Tribal community is being taken over by big farmers.

Andhra Pradesh (83.5 percent) along with Telangana accounts for about 97 percent of India’s 278,000 tonnes of crude palm oil production.

A senior official of Telangana government from horticulture department, explained that palm oil is being cultivated in about 19,520-hectare area of the state with the engagement of about 10,000 farmers.

The official informed that the state wants to increase palm oil production and in June 2020 about 329,000-hectare area was notified for palm oil cultivation but that will be taken up from June 2022 because the plant material is not available right now.

When asked about the crop from which farmers will shift to oil palm plantation, the official said that initially, they were focusing on absentee farmers who have huge land but don’t reside in their villages. Now, other farmers will also be roped in who are mostly cultivating paddy in their land, said the official.

Meanwhile, there are several other states as well that have significant potential but are not interested in adopting oil palm cultivation. For instance, states such as Maharashtra, West Bengal and Bihar have significant potential but the central government has admitted in the past that those state governments are not interested in pursuing palm oil production.

But the minister admitted that expansion of palm oil cultivation in the north-east region has its own share of challenges such as hilly and undulating topography and non-availability of flat land and small landholding of farmers with limited resources in addition to challenges like long gestation period, price instability due to fluctuation in international prices and competition with crops faced by other states as well.

According to the government of India, six north-eastern states – Mizoram, Arunachal Pradesh, Meghalaya, Tripura, Nagaland, Assam – together have a potential area of 218,000 hectares for palm oil crops but less than 20 percent from this was under plantation (till October 2019). Of the six states, Meghalaya and Tripura are identified as states that are not interested in pursuing it.

Zion Lalremruata, who is general secretary of All Mizoram Farmers’ Union (AMFU), explained to Mongabay-India that palm oil cultivation in Mizoram is generally unsuccessful.

“Initially, the central government was positively pushing for it and a good number of farmers in the state got engaged in the oil palm cultivation. However, they gradually realised that it was not as promising as it was said to be. Farmers faced several hurdles in the process and the biggest one came in ferrying the produce from farms to the factory,” he said.

Lalremruata informed that “in the beginning, farmers were told that many companies will establish their factories in the state but so far only” very few have done it leading to trouble for farmers who are forced “to carry their produce for long distances” on bad roads.

“In some districts, some major private companies were supposed to establish their factories, but it didn’t happen. In this situation, farmers were not able to sell their produce and had to bear huge losses because of it. Now, most of the farmers have abandoned oil palm cultivation. In some areas, few farmers are still into oil palm cultivation but they are very few in numbers,” he claimed.

The union leader also said that “price was another big issue” as “farmers were not getting a good price for their produce.”

When asked whether these oil palm trees were planted after removing forest areas, he gave an affirmative response but added that in recent times there has been no extension. Removal of forests has been the main area of concern regarding the import of palm oil from countries like Malaysia where hundreds of thousands of hectares of tropical forests have given way to palm oil plantations. 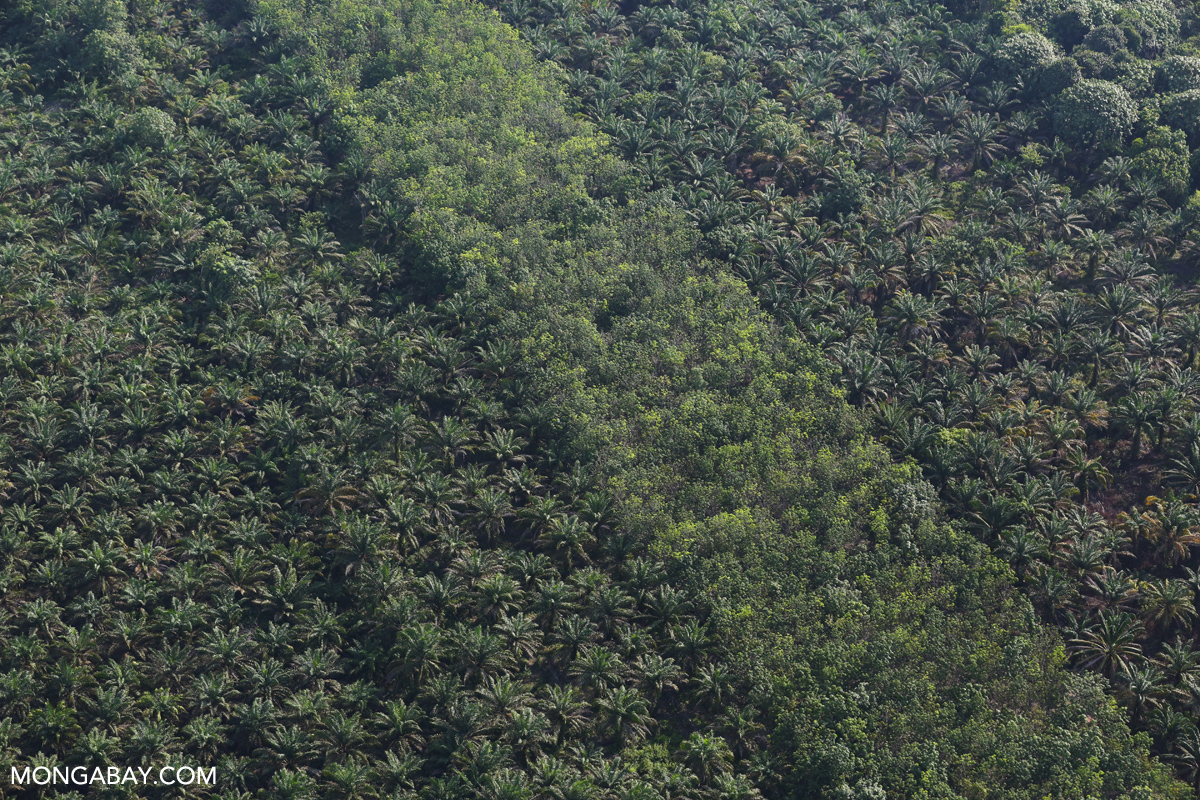 Timber and oil palm plantations in Indonesia. India imported more than eight million MT (metric tons) of palm oil every year between 2016-17 and 2018-19. India’s demand in turn drives deforestation in countries such as Malaysia and Indonesia, which are the largest producers of palm oil. Photo by Rhett A. Butler/Mongabay.

What else is the government doing?

According to the Indian government, India needs 25 million tonnes of edible oils to meet its requirement at the current consumption level of 19 kilograms per person per year. Out of the total requirement, 10.50 million tonnes is produced domestically from primary (soybean, rapeseed and mustard, groundnut, sunflower, safflower and niger) and secondary sources (palm oil, coconut, rice bran, cotton seeds and tree borne oilseeds) and the remaining 60 percent is met through import.

This means India is heavily dependent on imports to meet its edible oil requirements and is in fact the largest importer of vegetable oils in the world (15 percent). Of the imported edible oils , the share of palm oil is about 60 percent followed by soybean oil with a share of 25 percent and sunflower (12 percent).

Apart from providing financial assistance to farmers, the government is also trying to involve private companies in developing oil palm seedling nurseries and processing mills in their respective states.

Some of these companies have already signed a Memorandum of Understanding (MoU) with the states who in turn have allotted areas for new plantations. The companies are establishing nurseries in their allotted zone for developing seed gardens of oil palm and also extending technical support to the farmers.

“They are supposed to establish a nursery in their allotted oil palm factories – which they are in the process of. If farmers come forward, these companies have to provide plant materials and are supposed to extend technical support to farmers as well. In the third or fourth year, they will have to establish oil mills. They will procure the oil palm bunches from farmers,” said the official.