“For a crop loss worth Rs. 15,000 per acre, we receive only Rs. 6,000 in compensation from the forest department. That money is of no use to us; we have been incurring huge property damage and loss of life. We want the elephants to be removed from our village,” said Gundamma, a farmer from Parvathipuram, in northern Andhra Pradesh’s Vizianagaram district.

People of the Vizianagaram district in northern Andhra Pradesh have been facing property damage and loss of lives following close encounters with elephants. A herd of elephants displaced presumably from Odisha moved southwards to bordering villages such as Parvathipuram in Andhra Pradesh. Over the last four years, seven people and six elephants, have lost their lives in negative interactions.

“I was the officer at Pathapatnam in Srikakulam district bordering Odisha when we first saw the presence of elephants in the region in 2008. We drove them back to Lakhari Valley Wildlife Sanctuary in Odisha, eventually. It was easier managing that herd in Srikakulam than the one which has settled in Parvathipuram now,” said Trinadha Rao, Range Officer, Parvathipuram.

In Parvathipuram, the forest department has to contend with issues apart from the wild herd of elephants raiding crops and damaging property. “There is a railway track which passes through the district; there are low lying electric cables, open transformer boxes, and intolerant people which have been sources of major threats to the elephants and source of conflict in the area,” added Trinadha Rao.

What caused the displacement?

Half of the over 1,900 elephants present in Odisha are outside Protected Area networks. With that comes the threat of human-elephant conflict which is a major concern for the state. Odisha is part of the central Indian elephant habitat, one of the most fragmented and degraded habitats because of encroachment, shifting cultivation and mining activities, states the Wildlife Trust of India’s Right of Passage: Elephant Corridors of India report.

The northern part of Odisha has the highest number of iron ore, manganese and chromate mines. The southern part has about nine percent of the total forest area under shifting cultivation.

“There are internal and external pressures which affect the population of elephants. Internal pressures are developmental projects, construction of roads, dams, hydel projects. External pressures include an increase in human population and land expansion for agriculture. Ultimately, elephants are squeezed in all this,” said Ananda Kumar, an expert on human-elephant conflict and behaviour of Asian elephants in human-dominated landscapes, at the Nature Conservation Foundation (NCF).

He added, “On an average, the home range of elephants depends on the pressures of that area. The minimum forest cover an elephant requires is 700-odd square km. Although studies have proven that male elephants have a larger home range than females.”

Vizianagaram district, in northern Andhra Pradesh, has a moderate deciduous forest cover as well as a scrub forest with a human population of 18,53,563 as per the 2011 Census. Vizianagaram, where the elephants have migrated to, is further divided into eastern and western zones by a state highway passing through Parvathipuram, the Nagavali river running parallel to the highway, and a railway line passing through Parvathipuram. No recognised migratory route of elephants or a continuous forest patch exists as per the Project Elephant Report 1992 and WTI’s Right of Passage report.

Further, the revival of the Thotapally barrage in Parvathipuram in 2015 doubled the irrigation potential from 64,000 acres to 1,20,000 acres in the present day in Srikakulam and Vizianagaram districts. To accommodate this project, the Andhra Pradesh government carried out human resettlement.

New villages such as Seemanaiduvalasa, Gijaba, Nandivanivalasa, and Nimmalapadu were established around the barrage and railway tracks on the outskirts of Parvathipuram, which led to an economic boom in the area. Vizianagaram’s economy depends heavily on agriculture. With better availability of water, farmers did not have to rely solely on rainfall to grow their crops. This led to agricultural land expansion around the bordering districts. The farmers primarily grow crops such as tomatoes, sugarcane, maize, rice, and banana plantations.

“Elephants spend 70 percent to 75 percent of their time feeding. They prefer living in a covered forest canopy. Decreased availability of food and disturbances in their habitat compels them to move from one location to another,” said Sandeep Tiwari, Program Manager, IUCN SSC (International Union for Conservation of Nature Species Survival Commission), Asian Elephant Specialist Group. “The herd which migrated to Parvathipuram could perhaps have taken refuge in the hills and banana plantations as it mimics their natural habitat of a fuller forest cover,” added Tiwari.

Parvathipuram’s Range Officer Trinadha Rao said food is abundant for the elephants at Parvathipuram. They also have an abandoned marsh created by stagnated backwater from the barrage as a water resource to themselves, behind the hillock.

After much pressure from the locals, in March 2018, the Vizianagaram forest department started a project called ‘Operation Gaja’ to push the herd of elephants back to Odisha. The operation went on for over four days. The department, with the support of two helper elephants (kumki) brought from Tirupathi and Chittoor, managed to push two male elephants to the other state. The relocation programme however was unsuccessful as one of them died, and the other elephant returned. As of 2020, there were six elephants in the region — two female elephants, one calf (born after migration), two sub-adults, and one male elephant which has separated from the group.

“It was a difficult program for us to go through with. As you know, it is a very traumatising experience for both the animals and humans to relocate an elephant. It was also a significant monetary burden. We spent money from our pockets to arrange funerals for the elephants. Each funeral costs us Rs. 85,000,” said Rao.

Most human deaths have occurred while the farmers were tending to their farms. R. Lakshmi Naidu, a 52-year-old farmer from Parasurampuram village was trampled to death by one of the wild male elephants while he was on his farm with his cousin Sanyasi Naidu. Sanyasi managed to escape unhurt but his cousin succumbed to the injuries in October, 2020. Another 69-year-old woman, Allada Athamma, was trampled to death while she ventured out to collect the harvest from her farm early in the morning on May 6, 2021.

“My farm has been raided by the elephants often. We grow tomatoes and bananas on my farm. The compensation hasn’t been sufficient compared to the losses we incur. Our agricultural tools have been damaged too. We have given up any hope of help from the state. The elephants need to be moved,” reiterated another farmer, Narumnareddy, whose farm lies at the foothills of the hillock where the elephants have taken refuge.

When crops like paddy, sugarcane, red gram and banana, and horticultural crops like cashew and mango are damaged by elephants, the value of the damage is assessed through the concerned agriculture and horticulture departments and due compensation is paid to the affected parties. 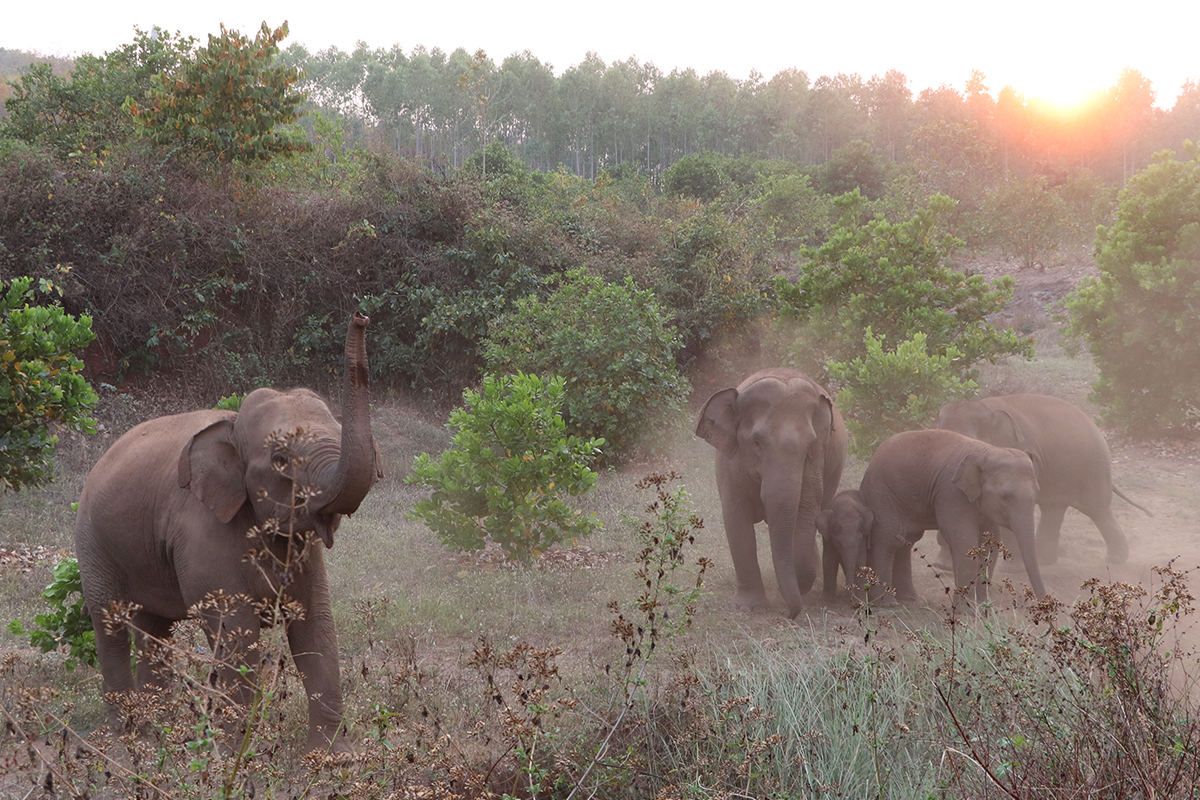 The elephant herd in Andhra Pradesh’s Parvathipuram is presumed to have migrated from neighbouring Odisha state. Photo by Almaas Masood.

The forest department steps up to address the situation

To address the growing restlessness of the villagers, the forest department has come up with its Elephant Tracking Network where a team of 16 ‘Elephant Trackers’ keeps a 24×7 watch on the movements of this herd with eight trackers each on the day shift and night shift. They hike every day and night in non-forest areas as well as forest patches, following the herd, to alert the villagers across the district.
The trackers spend all their time with the elephants trying to keep them from entering villages, raiding crops, or coming in contact with the residents.

They also send out regular updates to Trinadha Rao informing him about the herd’s movement. The Elephant Tracking Network is one among several initiatives launched by the forest department to prevent negative encounters between the community and wild elephants. The trackers and Trinadha Rao worry that since this is the first time the villagers have come in contact with a wild herd of elephants, they are not equipped to deal with the elephants. The farmers are becoming more intolerant towards this herd and have been protesting the presence of elephants in this region and have started looking at them as pests.

However, Ananda Kumar adds: “Conflict mitigation is different from conflict understanding. Unless we identify vulnerable areas and establish hotspots, it is very difficult to prevent conflict.”