“One February evening in 2022, a fisherman alerted me of a massive sea creature trapped in their fishing net on Vizag’s shore,” narrates Srikanth Mannepuri, photographer and wildlife conservationist from Kakinada, Andhra Pradesh. It was a stranded whale shark on Vizag’s shores. Mannepuri, having been involved in two rescue operations of stranded whale sharks, immediately knew the challenge that lay ahead.

The whale shark (Rhincodon typus) is a shark species and not a whale. It can grow up to 50 feet in length. This largest shark species is listed as an ‘Endangered’ by the International Union for Conservation of Nature (IUCN). India has fewer laws and regulations protecting sharks and rays than other Asian nation. Currently, Schedule I of the Indian Wildlife (Protection) Act, 1972, protects ten species of sharks. This includes the whale shark as well, making the act of capturing and/or killing it a crime.

“As soon as we confirmed it was a whale shark, I called the DFO. His directive was simple; to guide the whale shark to safety, sparing no effort and expense,” said Mannepuri.

The team consisting of 40 local fishermen, along with Mannepuri, managed to successfully push the whale shark to the sea after untangling it from the fishing net. The photographer said, “After quickly freeing the shark from the net, armed with a small fishing boat and just ropes, twenty men on each side dragged and pushed it back to the sea. It was no easy task as the whale shark kept lashing at us to free itself.”

Since 2021, the fishermen in Andhra Pradesh (AP) have noticed an increase in whale shark sightings along the coast of Visakhapatnam (also known as Vizag). Researchers say that not much is known about this largely depleted species, making it all the rarer to spot it. But fishery experts, researchers and local fishermen say that until late 2007, the whale shark was a rare visitor to the coastal Andhra region (East Godavari River Estuarine Ecosystem), but the number of sharks has increased in recent years. 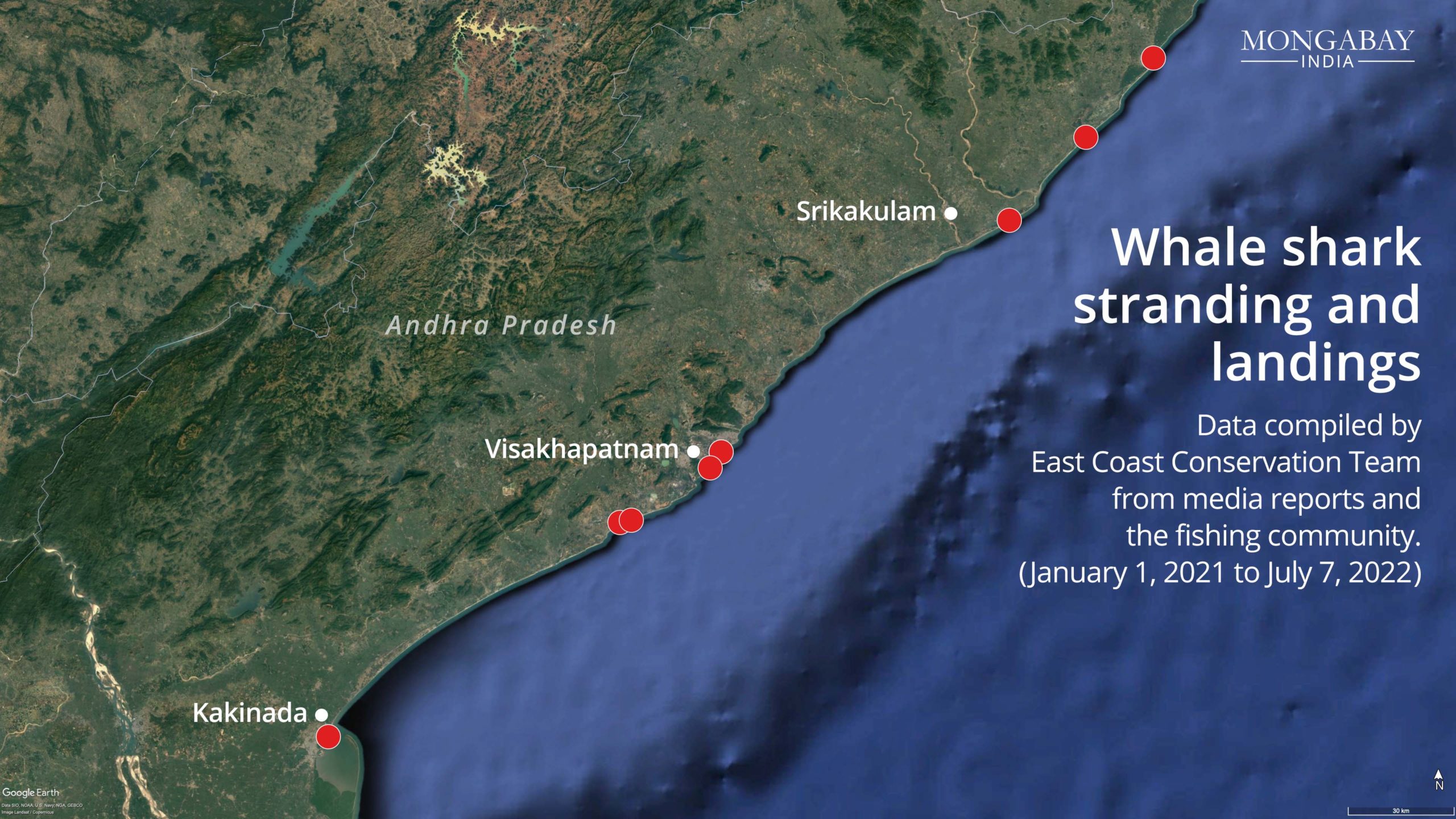 The fishermen received physical injuries from the fish during the February 2022 rescue. But it was their damaged fishing nets that caused greater distress. Their livelihoods depended on the nets.

The fishing net used by this group of fishermen is a shore seine, locally known as aila vala. This is a fishing technique that uses a seine, which is a net that surrounds the fish. It floats vertically in the water, with weights holding the bottom edge down and floats buoying the top edge. This is a common method for fishing closer to the shore. Seven of the eight whale sharks at Andhra Pradesh were reportedly bycatches in the shore seine.

DFO Anant Shankar said, “Despite the odds stacked against them and their livelihood at stake, the fishermen are the main heroes of this rescue. The entire credit goes to them. Right from alerting the authorities in time to seeing that the shark was guided back deep into the sea alive, the community really stepped up.”

The fishermen were then compensated for their rescue efforts by the forest department. “After assessing the damage, a compensation between Rs. 35,000 and Rs. 20,000 was given to each of the fishermen in cases of the last two successful rescues,” said the DFO.

He further added, “We have been conducting awareness programs on basic marine conservation. We have our turtle conservation program in place, which has helped us build relations with the community to get them involved in conservation.”

The whale shark is a pelagic species, which means that it lives in open water, both deep and shallow waters. The species favours warm waters with a surface temperature between 21 and 30 degrees Celsius (69.8 and 86 degrees Fahrenheit). Its migratory patterns causes it to travel between national Exclusive Economic Zones and into the high seas over the short term while also migrating farther away from shore over their lifetimes. Whale sharks are also known to come inshore closer to the coast to feed. Copepods, arrow worms, fish eggs, crab larvae, coral spawn, and krill are among the planktonic species it feeds on. This could be a reason for it getting caught in nets closer to the shore.

However, surveys between June 2013 and January 2016 by the East Godavari River Estuarine Ecosystem (EGREE) Foundation discovered that 79 individual whale sharks were killed during during the survey period in the Kakinada region, which is 150 km away from Vizag. The whale shark landings during this period happened in all months except during the fishing ban from April 16 to June 15 each year. In September of 2014, 22 whale sharks were brought to the landing centre. Of these 22 sharks, four were alive after being caught in a shore-seine fishing net, the report said. The DFO was a part of this program during his tenure at Kakinada. The knowledge and experience from this program came in handy when it was time for him to make a quick decision during Vizag’s stranding.

According to research, over the past 75 years, the world’s whale shark population has decreased by 50%. Various human activities place significant pressure on whale sharks. It includes oil rigs, transportation and service corridors, and fishing.

In eastern peninsular India, Andhra Pradesh has the second-longest coastline of 974 km, making up 12% of the nation’s total coastline. It has one major operational port, 14 minor ports, five of which are operational, and six more ports that are now proposed to be built under a public-private partnership.

Apart from this, the coastline of Andhra Pradesh has two oil refineries by Oil and Natural Gas Corporation (ONGC), the headquarters of the Eastern Naval Command of the Indian Navy, and multiple pharmaceutical and chemical industries dotting it.

“It also has 27 active coastal villages with landing centres in almost all the villages,” said Sri Chakra Pranav, a marine biologist and co-founder of the East Coast Conservation Team, a non-profit working on wildlife conservation on the east coast of India.

“Rapid industrialisation is definitely a cause of impact to whale shark populations. They get caught in fishing nets, get hit by ships, and are at risk of ingesting microplastics and other pollutants which clog their gills,” Chloe Winn from the Maldives Whale Shark Research Programme, a research-based conservation charity, told Mongabay-India.

“There is no sufficient research available on whale sharks. When they die, they sink to the bottom of the ocean,” added Winn.

Incentivised conservation programmes could be one way to increase the engagement of local communities in marine conservation on the coast and at sea. For example, annual whale shark migrations to the Ningaloo Marine Park on the northwest coast of Western Australia have grown into a thriving ecotourism industry. There is a thriving eco-tourism industry in the Maldives as well.

However, the same cannot be applied on the east coast of India in the Bay of Bengal. “We have multiple external pressures along the state’s coast in Bay of Bengal such as active shipping routes, oil refineries, pharmaceutical industries all dumping waste into the sea. An eco-tourism idea sounds wonderful to have on the east coast. The conditions are such that it is not sustainable,” said Sri Chakra Pranav.

Whale sharks can travel long distances (hundreds of kilometres), according to satellite monitoring conducted in U.S. waters and the South China Sea. Years may pass before these migrations are finished. The continuation of global tagging and tracking research will provide for a far better understanding of whale shark movements.

There is evidence of various marine animals such as baleen whales, Risso’s dolphins, and different shark species showing up at landing centres and getting caught in fishing nets on the coast of Andhra Pradesh. Despite that, the space lacks research and surveys to protect endangered species such as the whale shark, according to the East Coast Conservation Team members.

Banner image: A stranded whale shark on coast of Vizag on 18 December 2021. Photo by Srikanth Mannepuri.