It was after a heavy spell of rain during the 2015 monsoon that Sonali Garg walked out to a spot she had been visiting regularly, and unsuccessfully, for more than two years. A large muddy puddle.

But this time, she struck gold in the form of a new species of frog, Mysticellus franki sp. nov., which turned out to be so unique the study authors have assigned it to a newly created genus.

It all started in 2013 when Garg encountered “strange looking” tadpoles in that muddy puddle when conducting amphibian surveys for her PhD from Delhi University. It was clear the tadpoles belonged to the frog family Microhylidae, but beyond that, “we couldn’t pinpoint what species the tadpoles belonged to,” said Garg in an interview with Mongabay-India.

When the researchers sequenced the tadpoles and examined the DNA, it was clear that the tadpoles were of a hitherto unknown frog species.

“We have a library of sequences of frogs and other amphibians from the country and we could compare the sequence of the unknown tadpole against them,” said Garg. “To our surprise, the sequence did not match any frog species from the country; it fell into the family [Microhylidae], but beyond that, it did not match anything that was known from India.”

With no knowledge about the adult frog — where it was found, whether it was big or small — Garg and her team started visiting the puddle where they collected the tadpoles regularly. An adult specimen was needed to carry out the necessary morphological analyses to delve into the mysterious new species.

“For the next two years, we kept going back to the same spot. It was the only spot we were sure we would get it,” said Garg. “So we went back there at different seasons and different times of the year because we didn’t know when this frog would come out.”

“Eventually, after two years of this exercise of repeated searching, one monsoon, a couple of days after the monsoon hit, when there was sufficient water that collected on the ground, around the puddles … we saw the frogs. They were there in the hundreds, it was magical. It was as if the frogs were welcoming us,” she added, the excitement still palpable in her voice even after nearly four years.

The new species “was an accidental discovery,” said Garg and supervisor S.D. Biju. “We just happened to be at the right place, at the right time. And of course, often we fail to look closely. In this case, we looked closely at every tadpole, and that’s how this discovery happened!”

A new species … and a new genus

After making careful notes from the field and recording the calls of the male frogs serenading for females in the puddles, the researchers collected specimens and brought them to the lab to carry out genetic analyses.

A combination of genetic, morphological and call data threw up the final diagnosis. The frog was definitely a new species, and sufficiently different from other members of the family Microhylidae found in India to be assigned to its own genus as well.

The new species belongs to subfamily Microhylinae. The genus name Mysticellus is derived from the Latin mysticus, meaning mysterious, and ellus, which means diminutive. The name highlights “the ability of this small frog to remain out of sight despite its occurrence in wayside areas surrounding human settlements,” write the authors in the paper. The species name franki honours Franky Bossyut, a professor and amphibian biologist at Vrije Universiteit Brussel.

“I agree with assignment of the species status. The allocation of a genus status is motivated based on molecular evidence. The evidence is still tenuous because we have one member of the new genus,” said Karthikeyan Vasudevan,  senior principal scientist at the Laboratory for the Conservation of Endangered Species (LaCONES), Centre for Cellular and Molecular Biology.

“More than anything, it is surprising that it has not been already found and described. While very similar in shape, size, and colouration to other microhylid frogs in southeast Asia, there is nothing in the Western Ghats of India that resembles this,” said David Blackburn, the Associate Curator of Amphibians and Reptiles at the Florida Museum of Natural History. “It is only the secretive nature of these frogs that has resulted in them only now being known to science.” 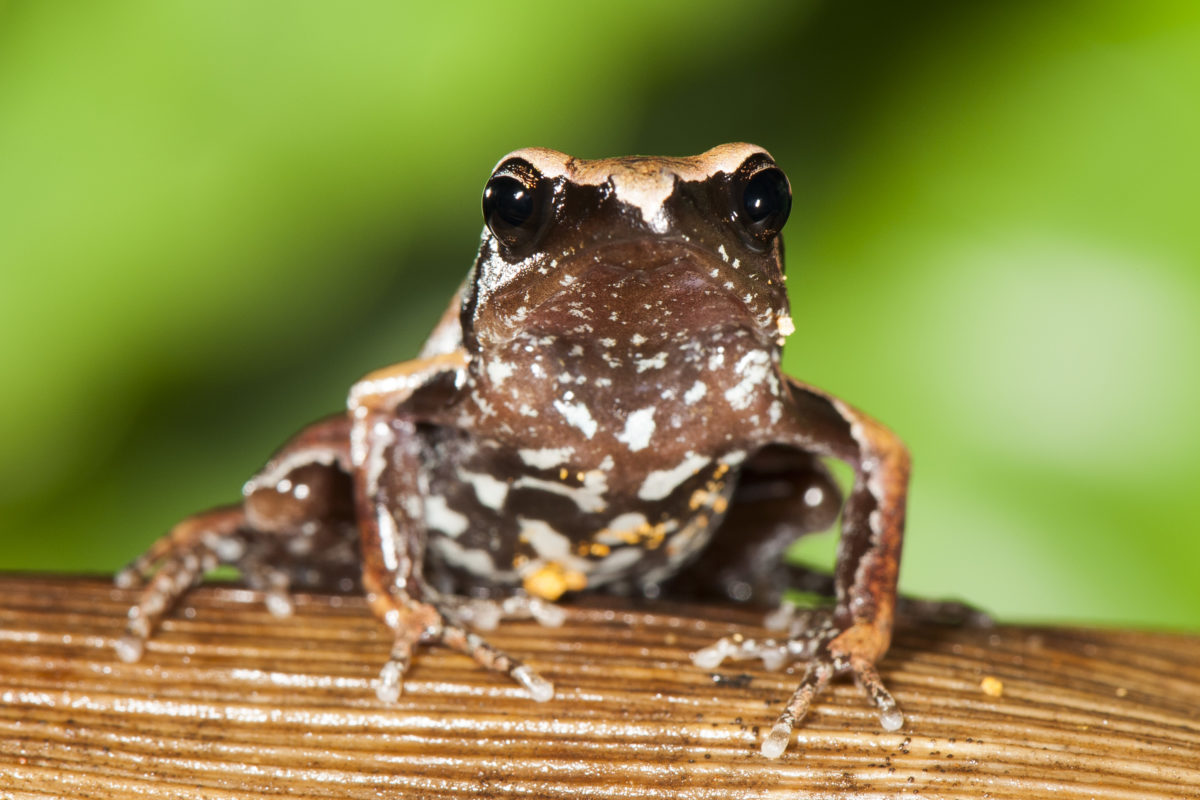 The new species of frog was discovered when researchers came across a ‘strange’ looking tadpole. After continuously searching for an adult for 2 years, they spotted around 100 adult frogs around a roadside puddle. Photo by SD Biju.

Hidden spots and an insect-like call

The researchers observed that the frogs started congregating in hundreds around temporary muddy puddles, two to three days after the first monsoon showers. After four to five days of intense breeding, the frogs disappeared completely, leaving the researchers mystified.

“After we first discovered this frog in 2015, we carried out several surveys in and around the region over a period of three years to study this frog. However, due to its secretive behaviour we were only able to locate it during a very short window of less than four days,” said the authors in an interview.

After the frogs disappeared, the researchers were not able to locate “even a single individual” at any other time of the year. “We don’t know where it hides, lives, and what it does for the rest of the year. The frog’s external appearance does not show morphological adaptations for burrowing. At the same time, we doubt that it simply hides under leaf litter, rocks and stone (the usual hiding places for frogs during the non-breeding time). It’s still a mystery for us,” they said.

When the males called to attract females, they raised the hind part of the body to show off “a pair of black false-eye like spots.” The frogs did the same when the researchers tried to approach them, said Garg.

“The effect is quite startling,” she said. “When the animal is sitting down, the spots are hidden. When we were close to the animal, the frog raised the hind part of its body. This movement really made the spots very visible.”

“The best guess we have is that it’s a defensive mechanism,” she said.

The call of the frog is also quite distinct, observed the researchers. “It resembles an insect chorus,” write the authors in the press release.

The frogs probably had such a unique call to attract females in the most efficient manner, said Garg. “Even if a puddle is crowded with multiple frog species and multiple individuals of the same species, even if it’s pitch dark, the female needs to be able to find her way to the male,” she said. “This is one reason to have unique calls. Also, for this species, with such a short breeding window of four or five days, the pressure to get it right is much higher,” she added.

For M. franki in particular, the closest relative on the family tree is the genus Micryletta, also belonging to subfamily Microhylinae but found in the Indo-Burma and Sunderland biodiversity hotspots in Southeast Asia and China.

Using algorithms that can parse out evolutionary timelines by considering the rate at which DNA changes over time, the researchers were able to give tentative dates to different nodes of the phylogeny.

“Our study shows that the common ancestors of Mysticellus and Micryletta diverged about 40 million ago. Most likely they originally inhabited the Indian Peninsula and later diverged to give rise to both these genera,” said the authors.

The authors posit that the two genera are likely to have split when the Indian landmass moved close to mainland Southeast Asia through the Myanmar-Malay Peninsula during Middle/Late Eocene.

Karthikeyan Vasudevan from LaCONES said, “Recent evidence from the study of arthropods in amber suggests that prior to the final collision at around 55 million years ago with Asia, India moved close to or had land connections with Africa and Europe.” Some models of continental drift show that species could have moved between the Indian subcontinent and Southeast Asia prior to the former’s collision with Asia, he added.

“This might help explain the presence of genera that are not present in the Eastern Himalayas, but are found in South India, Sri Lanka and Southeast Asia,” he added. He gave examples of the skink genus Dasia and the pit vipers (genus Tropidolaemus).

David Blackburn from the Florida Museum of Natural History agrees. “Clearly, some lineages must have survived on India as it moved across the Indian Ocean during the late Mesozoic and early Cenozoic, but several studies, including this one, now support that colonisation of the Indian subcontinent by animals from Asia before India had fully collided with the Asian mainland,” he said. 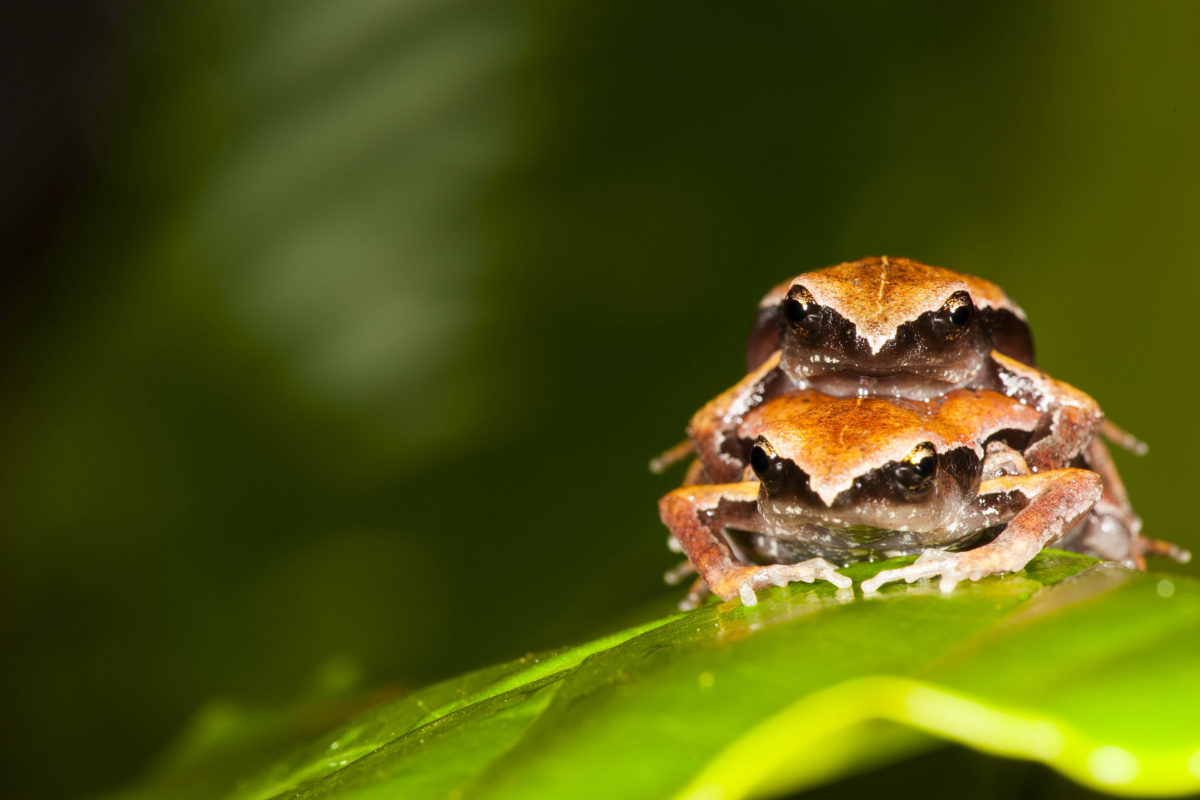 The secretive frogs vanished after appearing for the breeding season which lasted for around four days. Photo by SD Biju.

With inputs from Sahana Ghosh.