[Photos] Zooming into the environmental problems of a growing Chennai

Since the 2014 national elections, the capital city of Tamil Nadu has witnessed major environmental calamities, from the disastrous floods of December 2015 to the giant oil spill outside Kamarajar Port at Ennore in early 2017. Apart from these distinct events, the vast expanse of Chennai metropolitan area has seen an increase in pollution – both of water bodies that serve the city’s seven million population and the ambient air.

When the floods struck in December 2015, the most iconic images were those of Chennai’s famed beaches lined with mountains of trash. Waste such as plastic materials, wrappers, bottles, covers, metals, scrap and wooden logs were spread out on display along the coastline of the Bay of Bengal in Chennai, across Marina and Elliot’s beaches.

More than a year later, during the early hours on January 28, 2017, there was a giant oil spill outside Kamarajar port, when the outbound B.W. Maple collided with an inbound tanker Dawn Kanchipuram. A total of 251.46 tonnes of black, sticky oil coated the Ennore coast.

Reports state that the oil spill was removed largely by the hand, with more than 2000 volunteers and labourers using mugs and buckets. However, the damage remained toxic, killing olive ridley turtles and other marine fauna on Chennai’s beaches. 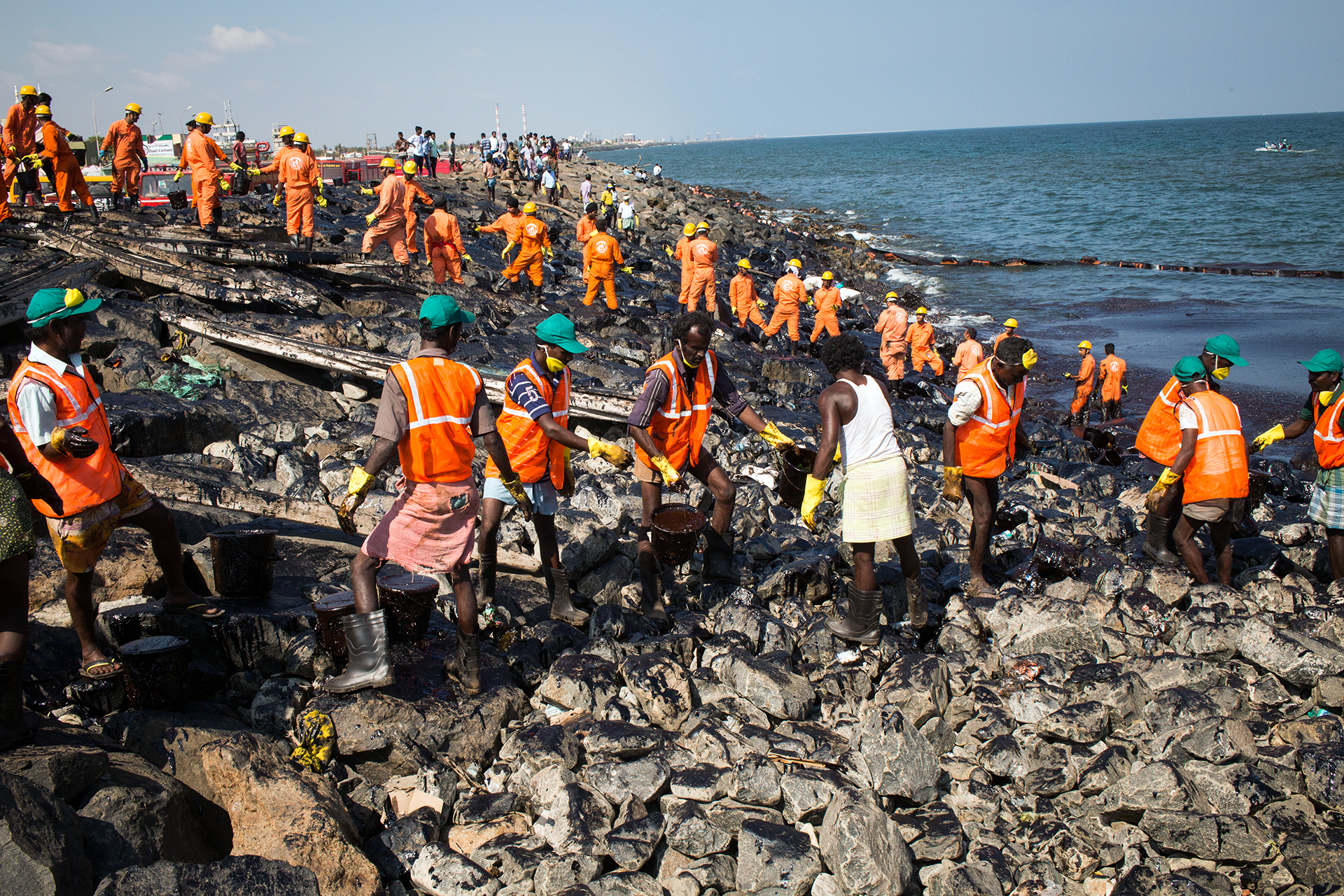 Kamarajar Port near Ennore saw massive 251 tonne oil spill when two tankers collided against each other in 2017. Photo by Amirtharaj Stephen/PEP Collective.

The 136 km long Kosasthalaiyar river is the major water source for Chennai, Thiruvallur and a few North Arcot taluks. The river originates from Andhra Pradesh, flowing across Tamil Nadu and draining into the sea at Ennore creek. The river enters the Chennai metropolitan area as Cooum river, one of the most polluted water bodies in the district.

Kosasthalaiyar was reported to be “more polluted than industrial effluents”, according to a study conducted by the National Green Tribunal in December 2017. Of the total 20 samples taken along the area, all five samples from Kosasthalaiyar contained higher than permissible levels of lead, mercury and arsenic. 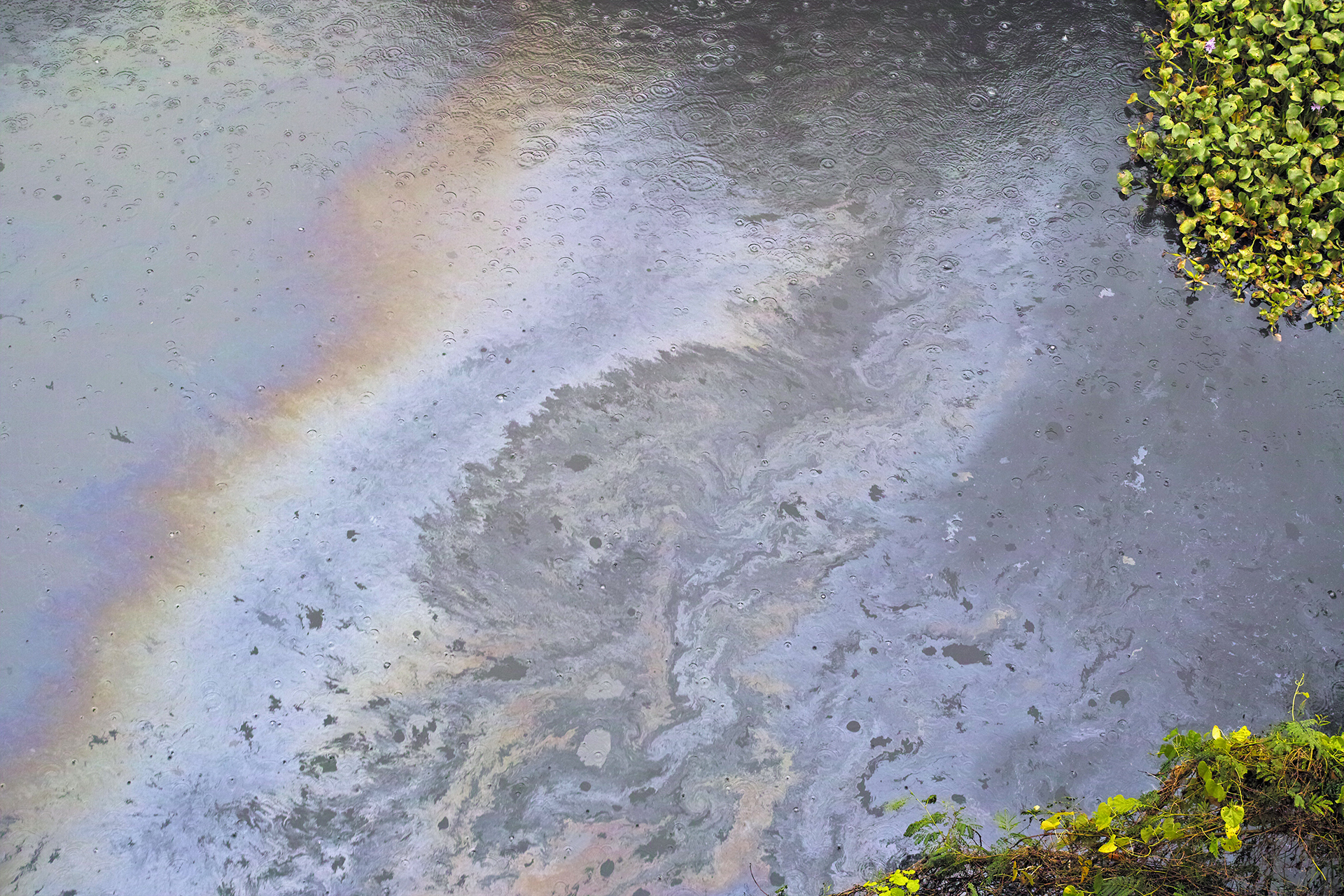 Oil and petroleum waste with high toxicity levels are seen contaminating water at the mouth of Kosasthalaiyar. These contaminants do not degrade and thereby leave traces of toxins in drinking water consumed by the city. Photo by Amirtharaj Stephen/PEP Collective.

Drifting away from the shores, the city’s largest dump yard in Kodungaiyur allegedly has 12 million cubic metre of waste, dumped over a period of 30 years. A fire accident in April 2018 brought life to a halt in the area; residents reportedly had to flee to escape the toxic air, the unbearable stench and eye irritation.

The state budget announced in February 2019, however, has allocated Rs 7000 crores for solid waste management in the city, including the remediation and reclamation of both the major garbage dumps, Kondungaiyur and Perungudi.