In early April this year, a video was being circulated amongst animal rights activists in Karnataka. A mahout spoke to the camera, stating that since the lockdown, his 55-year-old captive elephant has not had anything to eat.

The elephant belonged to a temple in Mudhol district, and for the last 40 years, had been living off offerings of jaggery, sugarcane, fruits and grains provided by the people visiting the temple. But since the lockdown, the elephant has not been able to step out and the temple was running out of fodder. The video ended with the mahout appealing for help.

Ever since the lockdown, there have been several such stories that have been doing the rounds on social media, seeking donations to provide food for starving captive elephants. Joseph Barretto, owner of the Jungle Book Resort in Goa has five elephants in captivity, which are typically used for rides and “showers” for tourists. He released a video seeking donations for “his starving elephants”.

The elephant owners of Amer Fort in Jaipur, Rajasthan, known for using at least a hundred elephants for tourist rides, also complained about the lack of income that disabled them from getting fodder for their elephants. Similarly, elephants held captive by individual owners in Kerala, and religious institutions in Karnataka, have been seeking help for the upkeep of the gentle giants.

“It takes one pandemic to throw things out of gear,” said Suparna Ganguly of Wildlife Rescue and Rehabilitation Centre (WRRC), an animal rights non-profit based in Bangalore, Karnataka. “It just goes on to show how precarious their situation is when they are in private custody,” she said.

How does one “own” an elephant, anyway?

There are 2,675 captive elephants in India, according to the information received by Tamil Nadu-based animal welfare activist Antony Clement Rubin via an RTI response from the MOEFCC in November 2019 (and available to Mongabay-India). Of these, 1821 are in private custody and the rest are under the care of the forest department of various states. Among the elephants in private custody, some are owned by individuals, and some by institutions such as temples and circuses.

The Indian Elephant (Elephas maximus) is protected under Schedule 1 of the Wildlife Protection Act, 1972, which affords maximal protection. It is listed as “Endangered” in the Red List of Threatened Species of the International Union for Conservation of Nature (IUCN).

Under Section 1(5) of the Wildlife Protection Act, a captive animal is ‘captured, or kept or bred in captivity.’

Section 40 in the Wildlife Protection Act, 1972, gives special status to elephants regarding possession, inheritance, or acquisition. “This exception was originally created for the elephants that were already in captivity at the time, to regularise their possession. But it is being used to capture more elephants and issue new ownership certificates,” said Alok Hisarwala, a Goa-based lawyer who manages the Elephant Rights Campaign for Federation of Indian Animal Protection Organisations (FIAPO).

Explaining it further, he said, “It’s like this. If I step into the forest and see a wild elephant and if I get caught trying to capture it, I have committed an offence. But if the next morning, I happen to walk to the Chief Wildlife Warden’s office, telling him that I have an elephant in my backyard and that he/she is listening to all my commands, I will get the ownership certificate. They won’t ask me how I acquired the elephant.”

“These captive elephants are brought as baby calves from the north-east to Rajasthan, and trained for tourist rides,” said Abhishek Singh, an animal welfare activist based in Jaipur. “An MOU was passed between the Forest Department and some of the non-profits in the area, about 4-5 years back, that no more new elephants will be brought to the state,” he said. “But the rules continue to be flouted.”

Moreover, elephants are used for commercial purposes. Under the Performing Animals Registration Rules, 2001 (part of Prevention of Cruelty to Animals Act 1960) using captive elephants for commercial purposes such as tourism is strictly prohibited unless specific permission is obtained by the Animal Welfare Board of India. There are several state-specific laws, as well.

In 2017, members of the Animal Welfare Board of India attempted to conduct health checks on the elephants in Jaipur. Out of the 102 elephants tested, at least ten showed symptoms of tuberculosis, a zoonotic disease. The report also revealed that elephants were suffering from blindness, with tusks removed, and under extreme psychological stress. However, no action was taken at the time.

“We tried to organise a health camp earlier this year (2020), but that was also cancelled at the last minute,” says Singh. In fact, earlier in March, PETA wrote a letter to the chief minister of Rajasthan, urging him to stop the elephant rides because of the potential risk to tourists of contracting tuberculosis.

“The elephants are constantly abused, they are made to stay in concrete stalls, they have foot diseases, ankush (a sharp instrument used by mahouts) is used to control them, and they are constantly under stress,” said Singh.

The elephants from the Mysore Dussehra camp, which were made to perform at religious ceremonies had a higher amount of stress hormones than others. The study explained that heightened levels of stress can cause infertility, hyperglycemia, suppression of immune response, imperfect wound healing, and neuronal cell death.

“Elephants are social animals, they need other elephants around them, and when they are kept isolated environments such as temples, it automatically elevates their stress hormones,” said Sreedhar Vijayakrishnan, a researcher on elephant behavior at National Institute of Advanced Studies, Bangalore.

“In females, this disrupts their reproductive cycle,” he said. Male elephants go into musth at around 20-21 years of age. Their testosterone level goes up, and their ranging behavior increases. “This means they travel a larger distance than normal, in search of a mate. When you keep them in captivity in one place, it automatically increases their stress level,” he said.

“Some of the manifestations of stress include stereotypic behaviour — rocking, swaying, head-bobbing, and other repetitive movements,” said Dr. Shantanu Kalambi, wildlife veterinarian and consultant at WRRC, based in Bangalore.

“This sometimes causes them to walk in an awkward manner, leading to arthritis and spondylosis,” he said.

Further explaining the physiological problems captive elephants go through, feet are the “biggest issue” for them, he said. “Thanks to constantly standing or walking on unsuitable hard surfaces, they have bad feet, abscess in the foot and hips, broken nails, and develop arthritis over time,” he added.

Other issues they face include blindness and cataract, “since they are out in the sun all the time.” If they had their own will, they would find shade, he says.

Elephants in captivity are often not allowed to have mud baths. “Mud acts like sunscreen for them, and keeps away ectoparasites,” says Kalambi. As a result, they develop skin problems.

“Increasing cases of conflict in captivity, manifested in the form of property damages and human casualties, is another issue in captive conditions,” said Vijayakrishnan. Several times a year, local papers report headlines such as “Elephant runs amok during temple festival in Kerala” or “Elephant crushes mahout to death”. “This is an area that is often overlooked, and is also a result of stress and inadequate rest for the elephant,” he said. 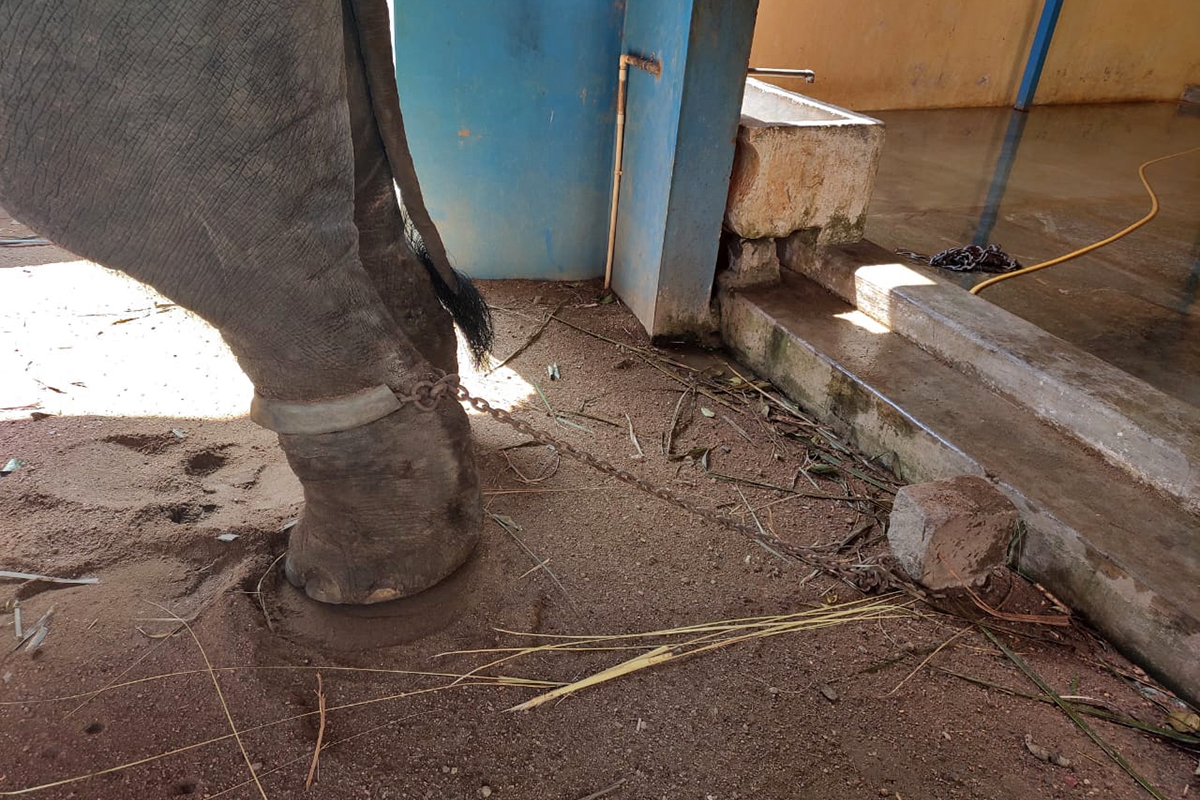 Research shows that isolation, confinement and increased workload causes stress in elephants, which manifests itself in various physiological problems. Photo by Shantanu Kalambi.

Response in times of pandemic

Conservationists and activists say that an average middle-aged healthy elephant needs 100-150 kgs of food per day, consisting of grass/foliage, hay, banana stock, ragi, rice, gingelly oil, vegetables, pulses and fruits, along with 5000 gallons of water. Captive elephants are heavily dependent on human intervention for their well-being, especially their mahouts, who play an active role in their positive reinforcement. The ones that are medically unfit require regular veterinary assistance. On average, the bare minimum cost for providing nutrition, medical needs and logistic support for one captive elephant amounts to approximately a lakh of rupees (Rs. 100,000) per month.

In response to the current pandemic crisis, Singh explained that each elephant handler in Jaipur was given Rs. 600 per day for the food and upkeep of the elephant, by the Rajasthan forest department. “This is too less an amount,” said Singh. “One needs at least Rs. 2000-3000 per day for an elephant.”

In Kerala, the state government released Rs. five crore (Rs. 50 million) for animal welfare, which includes the 479 privately owned captive elephants in the state. In Karnataka, the high court passed an order (paragraph 35; document available with Mongabay-India) on April 9 asking the state’s forest department to ensure the upkeep of the state’s privately owned elephants.

In Tamil Nadu, activist Antony Rubin sent a letter to the forest department, requesting them to allocate appropriate funds, food and veterinary attention to the state’s captive elephants, as well as to the mahouts. The confidential letter is available with Mongabay-India.

Need of the hour

While a long term policy change is the need of the hour, experts offer a variety of views for handling the gentle giants in captivity.

The CSIR-CCMB study on captive elephant stress recommends “minimizing participation in religious activities, processions” and creating opportunities “for elephants to interact with other elephants in the facility.”

“We need an urgent policy change to completely ban the ownership of elephants in private hands,” said Ganguly. “Whether it is owned by an individual or an institution, this needs to be stopped by law.”

She further added, “There are many captive elephants that are currently in good condition, and many in a bad condition. There needs to be formed a neutral committee, that consists of experts in the field, that can make a detailed report on the kind of housing and facility these elephants need.

“Designated care facilities and rescue centres run in a public-private collaborative partnership would be the best model to run such centers with free flow of funds, veterinary expertise and management support,” she said.

“The forest department should take over the care for these elephants,” says Rubin. “Many of them will not be fit to go to the regular forest camps, so there must be a special space arranged for them. They should reach out to non-profits and private individuals to help facilitate these arrangements,” he said.

Vijayakrishnan seeks a cautious approach. “A step-by-step approach is needed,” he said.

“The first step has to be ensuring that there is zero influx of of captive elephants. No more elephants brought in captivity,” he said. “The second needs to be taking stock of the existing demography of elephants.”

“There are close to 500 privately owned captive elephants in Kerala alone. The forest department does not have the resources to cater to all of them. So you have to find a working model that can work for the existing population. A blanket ban on private ownership of existing elephants may not be the best idea, but reducing workload and stress, regulating commercialisation, training mahouts, and arresting influx of the captive elephants to the states definitely is,” he said.

“It is never right to capture an elephant from the wild,” said Rubin. “But for those that are already captured, they deserve to be treated well till their last breath.”

“This pandemic has opened a Pandora’s box,” said Ganguly. “We have an opportunity to change things for them in the long-run, and we must make an effort for it. It is time to bring about a change to a problem that has been neglected for decades,” she said.

Banner image: An elephant at a tourism centre in Goa. Photo by Supriya Vohra.