[Photos] Scenes from the Sundarbans after Amphan

by Sahana Ghosh and Kartik Chandramouli on 29 May 2020

The impacts of cyclone Amphan on millions of people in eastern India and Bangladesh, particularly in the ecologically fragile Sundarbans region, have reinforced the urgent need to build resilience into delta communities, a section of which has already lost their livelihoods to the COVID-19 related lockdown.

Fueled by unusually warm waters of the Bay of Bengal, cyclone Amphan became one of the strongest cyclones in the recorded history of the north Indian Ocean, impacting coastal West Bengal, Odisha, and Bangladesh, scientists have said.

In its aftermath, Tarun Kumar Mandal, a jatra (folk theatre) artist, who hails from Satjelia island of the Gosaba Community Development (CD) Block in the Indian Sundarbans Delta, said he feels “directionless.”

Cyclone Amphan flattened the home that he built from scratch from the savings that he made through folk theatre performances. Jatra, his last resort for a living is in limbo, due to the novel coronavirus associated lockdown.

In a written communique in Bangla, he recalls his harsh childhood, his parents’ sacrifices to get him an education, and how he was pulled into the realm of folk theatre when everything else failed.

Jatra is a folk-theatre form prevalent in eastern India and Bangladesh. Jatra means journey in Bangla and the name is thought to be derived from the habit of the performers who wander from place to place to perform.

He lamented that despite the pain and sacrifice his parents went through to get him a basic school education and (he topped his classes), he could not land his dream job of a primary school teacher as fund constraints prevented him from pursuing the necessary college degree.

After picking up a series of odd jobs and resulting disappointments, he eventually established himself as a jatra artiste, having inherited and inspired by his father’s interest in acting and playwriting.

With his plays, he managed to scrimp and save enough to purchase a small plot of land and build a house in Piyali, often referred to as the gateway to the Sundarbans, in South 24-Parganas, last year. His house is now gone. In Amphan’s aftermath, his family is in dire straits. His mother works as a domestic help in Kolkata, 75 km away from Piyali.

The Sundarbans comprise a cluster of small low-lying islands (less than five metres in height) in the Ganga-Brahmaputra-Meghna River delta. It is the largest continuous mangrove forest in the world.

The 10,000 square kilometre region stretches along the coast of Bangladesh (where 60 percent of the forest lies) and India. The mangrove forests are home to the royal Bengal tiger. 54 of the 102 islands have human settlements in the Indian Sundarbans.

Communities constantly live on the edge with tiger and crocodile attacks, erosion, rising sea levels (at the rate of 8mm/year) and climate change linked extreme events.

Analyses of cyclonic events in the Bay of Bengal over a period of 120 years indicate a 26 percent rise in the frequency of high to very high-intensity cyclones over this time period. Amphan became the second supercyclonic storm over Bay of Bengal since the 1999 Odisha supercyclone.

Pitching in with relief work, tour boat operator Sanjoy Mondal whose roots are in Kumirmari, Gosaba CD Block, emphasises how the communities take cyclones and other environmental challenges in their stride and have learnt to live with them. “When COVID-19 came we thought we would somehow get over it with the little that we have. But Amphan has shaken our confidence,” he said.

In an interview with Mongabay-India in 2018, Gita Mandal, a fisher whose husband was a victim of a tiger attack, summed up the situation: “There are crocodiles in the river and the tiger lurks on land on the other side. Erosion attacks us from the other end.”

While climate preparedness planning must involve all levels of government, representation from grassroots and community organisations is critical to ensure that the process meaningfully represents the interests of all citizens, stressed Avantika Goswami, sustainability, and climate professional.

Currently, rebuilding efforts in the Sundarbans and in rural Bengal are being led primarily by affected residents and grassroots groups, said Goswami. 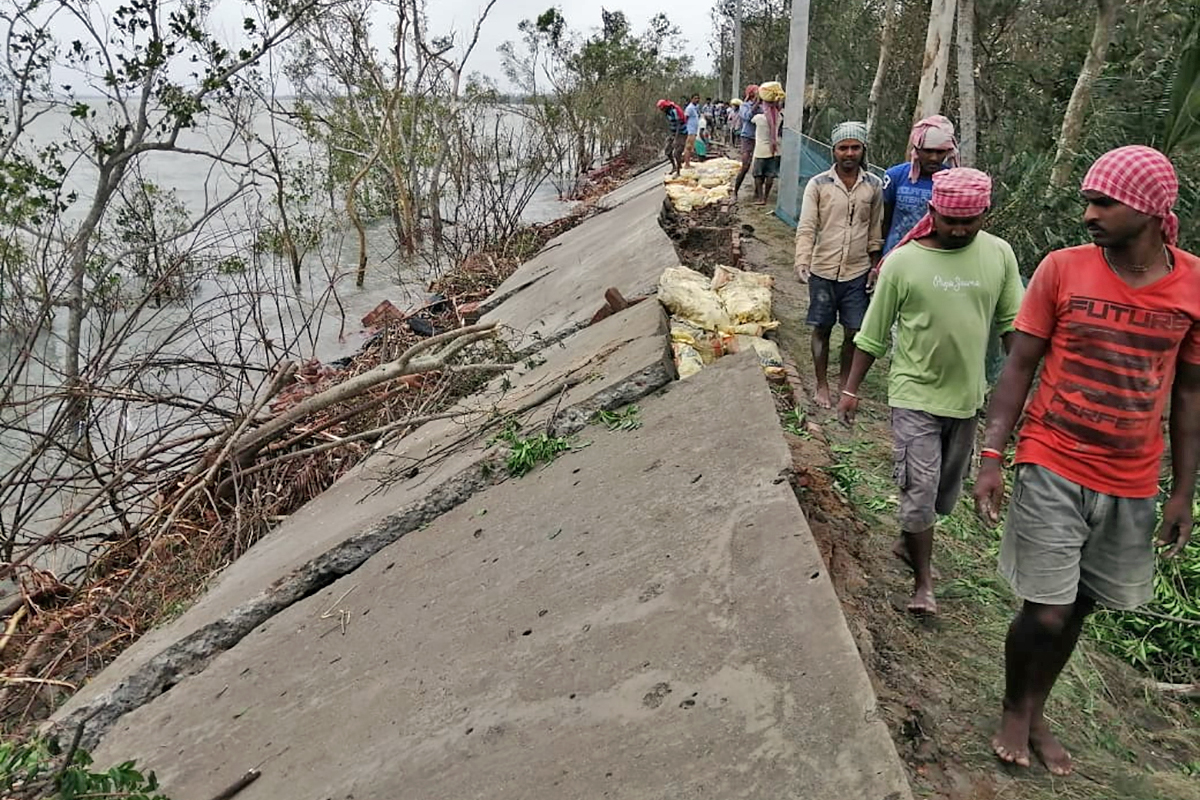 “We the residents of Sundarbans, knew that a storm could not wreak much havoc. It would topple homes, flatten boats. We were confident. But our faith was shattered by Amphan. You will see that Sundarbans’ residents generally are quite confident of weathering natural disasters. This calculation changed,” said Sanjoy Mondal, a tour operator. Photo by Sanjoy Mondal.

Kolkata-based NGO Society for Heritage and Ecological Researches (SHER), that has been working for over a decade to bridge local communities with the field staff of the Sundarbans Tiger Reserve for strengthening the joint forest management initiatives, has moved relief to communities in the fringe villages of the tiger reserve and is supporting the community kitchens run by the tiger reserve.

As relief moves into the islands and government authorities are taking stock of the damage, communities have already started working together, on their own, to patch up cracked embankments that breached in cyclone Amphan, inundating agricultural fields with saltwater, rendering them useless for at least a couple of years. The embankments are evidence of broken electoral promises.

Disaster management expert Anshu Sharma of SEEDS emphasised that infrastructure projects alone are not enough to build resilience in communities.  “A large part of resilience building lies in softer components, in strengthening abilities of local communities and authorities to anticipate risks, institutional capacities to absorb shocks, and learning from events and adapting accordingly.  This truer than anywhere else in remote communities and fragile ecosystems such as those of the Sundarbans.”

The frequency and magnitude of events such as cyclone Amphan are likely to increase with warmer sea surface temperatures, and communities are also increasingly facing a range of other climate impacts due to increased year-to-year variability and long term climate change. This calls for more attention to the necessary efforts needed to help decision-makers and vulnerable communities better anticipate and manage climate risks, said Mélody Braun, International Research Institute for Climate and Society, Columbia University.

“Climate services are part of these efforts. They include the generation of climate information based on the best available science, the translation and the communication of that information to decision-makers and communities in an appropriate language and format, and the use of that knowledge to inform climate-sensitive decisions,” Braun told Mongabay-India.

“However, they are currently often not sufficiently reaching the communities, and too top-down to fully address the needs of decision-makers. In order to reach their full potential, climate services require more policy support, targeted investment, efforts to strengthen the meteorological services as well as to improve transdisciplinary coordination and support convening and facilitation between providers and users of climate information,” said Braun whose experience focuses on Bangladesh.

“Bangladesh already has a very efficient and highly praised cyclone preparedness program that considerably reduced the number of casualties during cyclones of the past several years, however, the additional risk of COVID-19 made the preparedness for cyclone Amphan particularly challenging.”

Photos for this story and Tarun Kumar Mandal’s written communique in Bangla were sourced with the help of GCRF Living Deltas Research Hub.

Banner image: A man in Patharpratima inspects the damage done by the cyclone. Photo by Sudhansu Maity.