[Photos] The rich Hasdeo Arand on the road to become a ravaged Korba?

The pristine forests of Chhattisgarh’s Hasdeo Arand region can breathe a sigh of relief – at least for now. The five coal blocks in the biodiversity-rich Hasdeo Arand and adjoining region were among the 41 coal blocks recently put up for auction by the Indian government. But after severe resistance from the state government, the decision was recently reversed. It is estimated that about 6,800 hectares of forest have been spared the axe.

However, the state government’s resistance to the central government’s move was not isolated and is a result of years of advocacy and sustained campaign to protect it from turning into another Korba. The Korba region is another coal-rich area of Chhattisgarh adjacent to Surguja district (which includes the major part of the Hasdeo Arand region). The all-around impact of coal mining is visible everywhere – from the thick blanket of grey smog covering the city to its many residents who suffer respiratory issues ranging from asthma to lung cancer.

Activists feel what is now required is sustained pressure to ensure a higher level of protection to the forests in the Hasdeo Arand region. They believe it can be achieved by getting the tag of a protected area such as a conservation reserve or a wildlife sanctuary and ensuring that the decision not to allow any new coal mine is not reversed by the present state government or next.

The Hasdeo Arand region in Chhattisgarh’s Sarguja district is one of the most extensive unfragmented forests in the Central Indian landscape. Spanning over 170,000 hectares, the forests are home to over 350 species of animals. Segueing through Hasdeo and its adjacent villages is the Hasdeo river – the spine of this rapidly shrinking forest.

Despite all its rich biodiversity, these forests aren’t yet part of India’s protected area network (which includes wildlife sanctuaries, national parks, and community reserves) that ensure protection against exploitation. 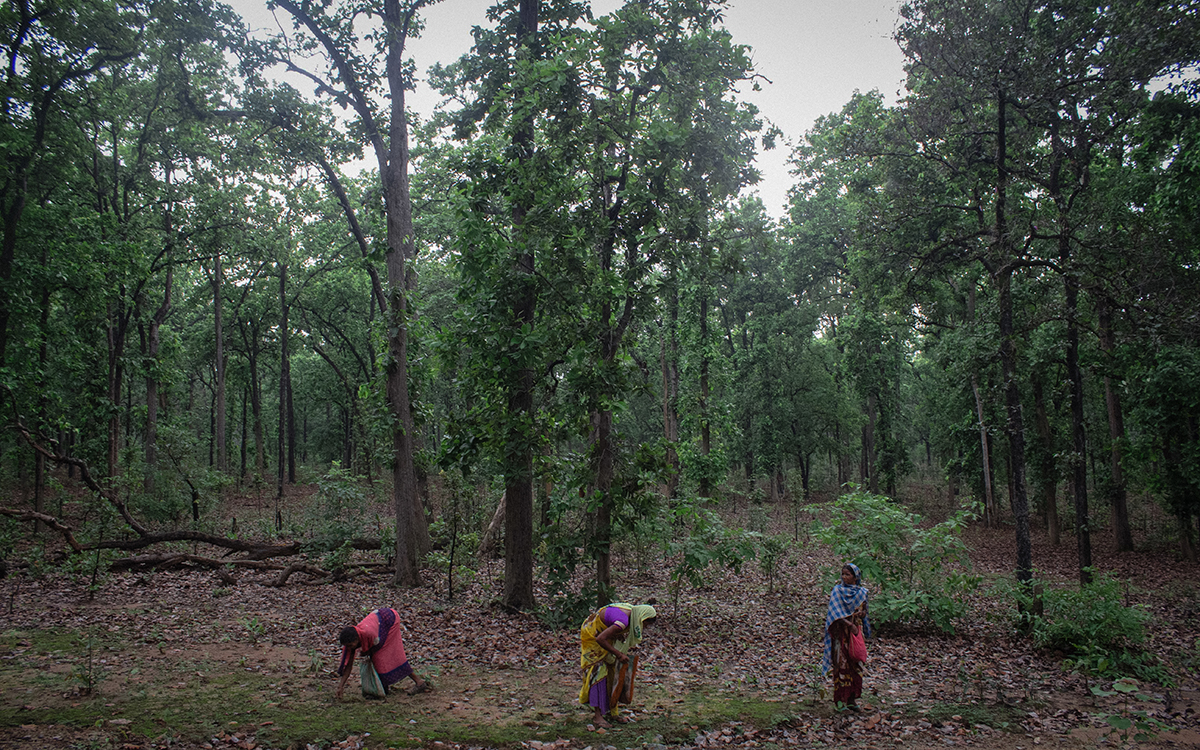 Women picking wild mushrooms or kukkudi in Hasdeo forests for consumption and sale. Tribal communities form a majority of the population in the Hasdeo region that spans across multiple Chhattisgarh districts. Photo by Vaishnavi Suresh/PEP Collective.

Parsa East and Kete Basan (PEKB) and Chotia are two active coal mining blocks out of 18 in the Hasdeo Arand region. Mining started in the PEKB block in 2013 by Adani Mining, a subsidiary of the Adani group, which is the block’s mine developer-cum-operator. However, the PEKB block is owned by the Rajasthan Rajya Vidyut Utpadan Nigam Limited (RVUNL). The extracted coal is transported to Rajasthan, where it is used for thermal power generation.

But the transition of this area from pristine forests to a mine spelled doom for the people of Parsa and nearby villages of Ghatbarra, Sahli, etc. Cutting right through the lush green forest and grazing lands, PEKB coal mine has caused severe difficulties.

“Before the mines came, the Sahli nullah (drain) and Kete nullah used to flow perennially. We were dependent on these streams for irrigation and our daily needs. Now there is barely any water in our streams. After the mine opened, waste was dumped into our streams, and that resulted in the death of at least 10-12 people in Sahli,” Jainandan, the member of panchayat of the Ghatbarra village, told Mongabay-India.

“Near Kete is an elephant corridor. The mine must have interrupted their natural route of passage and migration. After the mine opened, man-elephant conflict increased in all the villages surrounding the mine and caused severe destruction to their lives and livelihoods,” he said.

In 2012, one year after the clearance for the PEKB block was given, Jainandan and a few villagers and activists formed the Hasdeo Aranya Bachao Sangarsh Samiti (HABSS). This local movement mobilised villagers across Hasdeo and together raised a voice against mining in the area.

He also pointed out problems faced by the people displaced due to mining in the PEKB block. A visit to the resettlement quarters for the PEKB project shows how families displaced due to coal mining are stuffed into pigeon holes with no electricity or water access. Many of the inhabitants of the settlement colony have thus migrated from these quarters due to poor living conditions.

In 2012, when clearance was given for the PEKB block, it was assured that no mining would be allowed in the middle of the forest. Still, as recently as March 2019, environmental clearance was accorded to the Parsa Coal mine, which is deep within the Hasdeo forests. However, people in Parsa refused to part away with their land pointing out irregularities in the process. Towards the end of 2019, people began an indefinite strike after their concerns were not addressed.

In mid-October 2019, villagers from Tara, Sahli, Ghatbarra, Fattepur, Hariharpur, and surrounding villages assembled at the nearby national highway. They demanded that the land clearance for Parsa Coal Block be scrapped on the grounds of illegal consent forms, and that clearance is not granted to the PEKB Phase II and other coal blocks such as Madanpur.

For about 100 days, thousands of villagers protested and voiced their opposition to mining in the area. The protest was halted in December 2019 due to Panchayat elections, and the COVID-19 pandemic soon followed them in March 2020.

The government is focused on mining to boost the economy post COVID, and, in June 2020, it put up 41 coal blocks across the country for auction for commercial mining. Under the auction process, the interested companies bid for a coal block, and the one with the highest bid is granted the rights to mine coal. Of the 41 coal blocks, nine were in Chhattisgarh. Of those nine, five blocks were in the Hasdeo Arand and adjoining region. However, the refusal of the Chhattisgarh government to allow coal mining due to pressure from locals and environmentalists led to the central government accepting exclusion of the five coal blocks and instead including three other blocks from the state.

However, activists fear this is not the end of danger for the region. Alok Shukla, founder-member of the HABSS and convenor of Chhattisgarh Bachao Andolan, told Mongabay-India, that “a single mine causes disruption that affects generations of these families as it uproots their entire lives.” If not checked, Hasdeo could gradually transition into the next Korba under the garb of development.

Read more: The Hasdeo Arand story: Is coal mining a fait accompli for the pristine forests?

Adjacent to the Hasdeo-region lies Korba. This district is home to Asia’s largest and the world’s second-largest open-cast mine – Gevra. Apart from Gevra, Korba is also home to two other open cast mines, several power plants, and coal washeries. In 2015, Korba was even identified as a ‘critically polluted area’ by the Central Pollution Control Board (CPCB).

The coal mines in Korba are owned by South Eastern Coalfields Limited (SECL), a subsidiary of Coal India Limited (CIL), the world’s single largest coal producer and account for more than 80 percent of India’s total coal.

Among those who are impacted by mining in Korba over the decades is one 29-year-old Babita, who said that she remembers that her childhood was spent while playing in her family’s fields and the nearby streams. “We used the water from the stream to bathe, wash our clothes and cook our food. By the time I was 10, I remember seeing huge machines near our farm. Soon, the machines entered our farms,” Babita told Mongabay-India. In 2004, her village, Pondi, was a part of the land acquired for phase-II of Gevra.

As a teenager, she recollects living near a coal mine. “There was dust everywhere. There was dust on our crops, dust on our food, dust all over the house. We had no electricity. The mine dried up our streams and groundwater. We had to travel three kilometres every day to fetch water. Moreover, there was constant blasting in the mine. Huge chunks of coal and land would fall into our house after the blasting. Soon our homes began cracking due to the blasts. Once I remember a huge chunk of coal had hit me that left me bleeding.”

But that experience changed her. Babita is now among the most educated people from her village with a postgraduate degree in computers. She is often at the forefront of fighting for justice for Korba’s people, even though authorities have allegedly harassed her for doing so.

Babita’s stories ring a familiar tune across many villages in Korba, and these stories have travelled far and wide to nearby regions of Hasdeo as well. Many believe that present-day Korba holds frighteningly similar patterns to Hasdeo’s future if the government is left unchecked.

“Korba is the power hub of Chhattisgarh. It has 10-12 power plants, which generate nearly 20,000-megawatts of electricity annually. First comes the pollution from the coal mines, then the pollution comes from power plants and their fly ash ponds. Together they destroy the area. Korba faces the brunt of coal production of this full cycle,” Bipasha Paul, an independent activist who has been helping the HABSS for nearly four years, told Mongabay-India. Fly ash is a byproduct of burning coal in thermal power plants. These tiny, dark specks of ash lodge into the deepest parts of a person’s lungs, severely damaging the respiratory system.

The fly ash ponds are a danger too. For instance, Bharat Aluminium Company Ltd. (BALCO) has one of the biggest power plants in the Korba region. The fly ash produced by this plant is stored in a fly ash pond next to the plant, and the pond is situated next to several agricultural fields. In 2017, the fly ash pond burst leading to the fly ash destroying the neighbouring fields and water bodies. The villagers also complain that the power plant dumps their waste into the water streams around the plant, which are the primary source of water for locals’ daily needs.

Due to the horrors faced and recorded by the people of Korba, others have learnt the lesson. For instance, a power plant was proposed to be constructed in the Hasdeo region, next to the PEKB mine. But protests by local communities halted work on the power plant.

“There is no village you can call an ideally rehabilitated village. Be it Hasdeo or Korba or any region in Chhattisgarh where people were displaced for mines. There is a similar pattern of displacement, loss of culture, identity, and jobs that play out. In almost all cases, inhabitants belong to scheduled castes or tribes, who have historically been oppressed by the government and those from the higher caste alike,” said Shukla.

He said that a coal mine is functional only for 30-50 years, and once its resource is over, it is left just like that, or in some cases, fly ash from thermal power plants are dumped into the empty mine voids. “But the families whose lives were disrupted for the mine, what happens to them after 30 years?” he questioned. 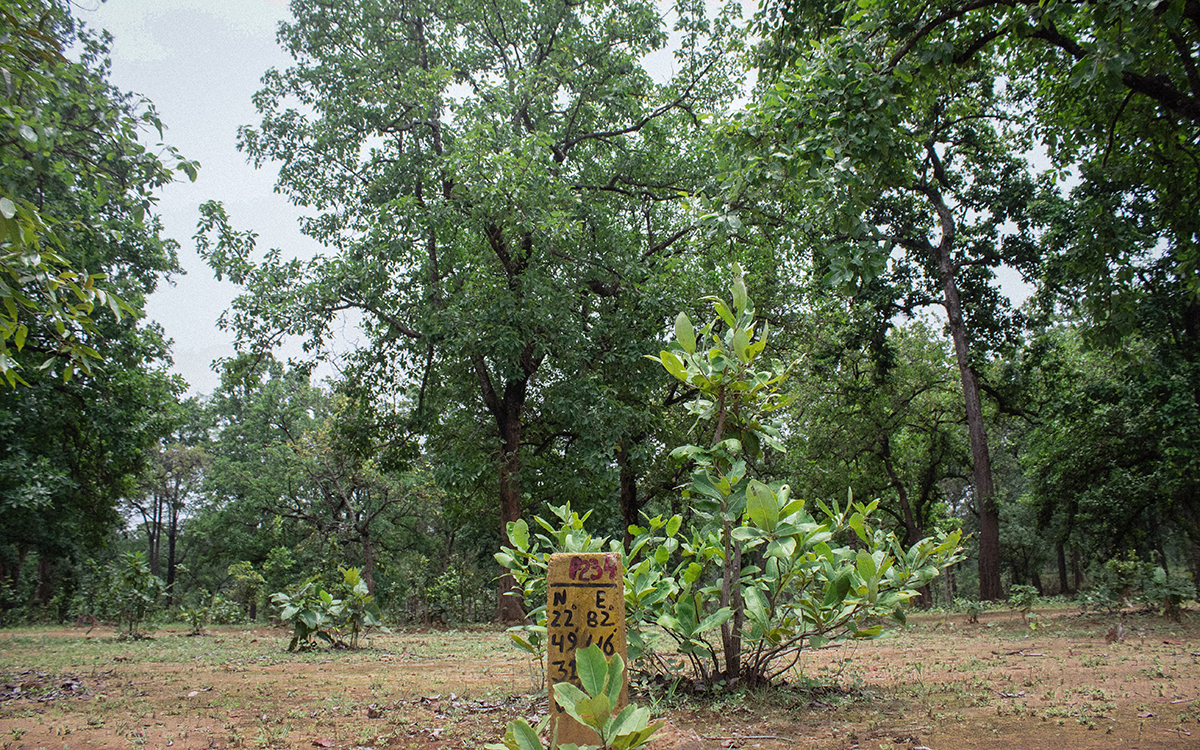 A marking in the Hasdeo forests indicating the region that will be dug out for a coal mine. Photo by Vaishnavi Suresh/PEP Collective.