[Photos] A Kashmir spring is protected by a local festival

All the children and men in a village taking a day off once a year to go fishing together may sound like a tale from bygone days, but this Kashmir village has witnessed it for ages. Nature has bestowed the southern Anantnag district of Indian-administered Kashmir with numerous springs. The largest among them is in Panzath village of Qazigund.

Known as Panzath Nag to locals, the spring has given the village its name. Derived from ‘Paanch Hath’ — Kashmiri numeral for five hundred — the spring is said to have been once a source to as many smaller ones. In the absence of an actual official count, experts say most of them have died out due to pollution and encroachments, such as the sprawl of residential houses and business establishments due to the increasing population. The spring brings forth a rivulet which, besides irrigating the paddy fields in several downstream villages, provides drinking water to over 25 others through supply lines. A nearby trout fish hatchery and an associated sale centre established by the government’s Department of Fisheries rely on the spring for its perennial water needs.

But in late summer, when the water table goes down, the growth of aquatic weeds such as coontails, cattails, waterweeds, watermeals and algal bloom overwhelm the spring. But the collective fishing-cum-weeding activity of the local community restores the spring the following year.

In the third week of May every year, before the paddy fields are tilled, the village elders choose a day to go fishing and simultaneously clean the Panzath Nag spring. Conventionally, the day should coincide with Rohan Posh (flowering the souls), the traditional annual fruit blossom festival specific to the region.

The festival is marked by children — from the Muslim majority region that Kashmir is — visiting the cemeteries in the late afternoon to shower flowers mixed with rice over the graves of their kin, a practice believed to soothe the departed souls. The elders pray for the dead and distribute home-baked chapatis (whole-wheat tortillas) among the children.

Earlier in the day, locals are allowed to go fishing in the spring. The spring is out-of-bounds to the public rest of the year, but it is theirs on the festival day. There are no angling rods, no proper fishing nets, just hundreds of men and children armed with wicker baskets and pieces of mosquito nets wading through the eutrophic waters, filtering it for fish.

Spectators who do not prefer to take the ‘muddy’ risk do not miss the festival. They watch it from the spring banks, joining the carnival with whistles, hoots and calls to their friends in the spring, waiting to get their share in the prey.

Though the algal bloom and the weeds hamper the free swim of participants, the craving for the superfood (fish) and the associated festivity keeps them going. Fish become the metaphoric lollipop, luring them to keep moving while weeding and dredging up the silt deposits from the spring bottom as a sideline.

“It is not just [about] fishing. It has been a tradition since our forefathers’ times,” said Shabir Ahmad, a local. “The underlying aim is to clean the spring for availing good water for drinking and irrigation for the rest of the year.”

However, the authorities differ. “We do not agree to the practice being so necessary. De-weeding, if needed, can be done by the authorities as well. The [Lakes and] Waterways Development Authority does it occasionally,” Fayaz Ahmad, the Deputy Inspector at the nearby hatchery, told Mongabay-India.

The proliferation of weeds in Kashmir valley is a major challenge, having led to the deterioration of water bodies, especially the world-famous Dal Lake in the capital city of Srinagar, leading to biodiversity loss and pollution. “Chemical weed control is not the option as it may lead to toxicity and deterioration of water,” says Aashiq Hussain, a weed specialist and Associate Professor at the Sher-e-Kashmir University of Agricultural Sciences and Technology, Kashmir (SKUAST-K). 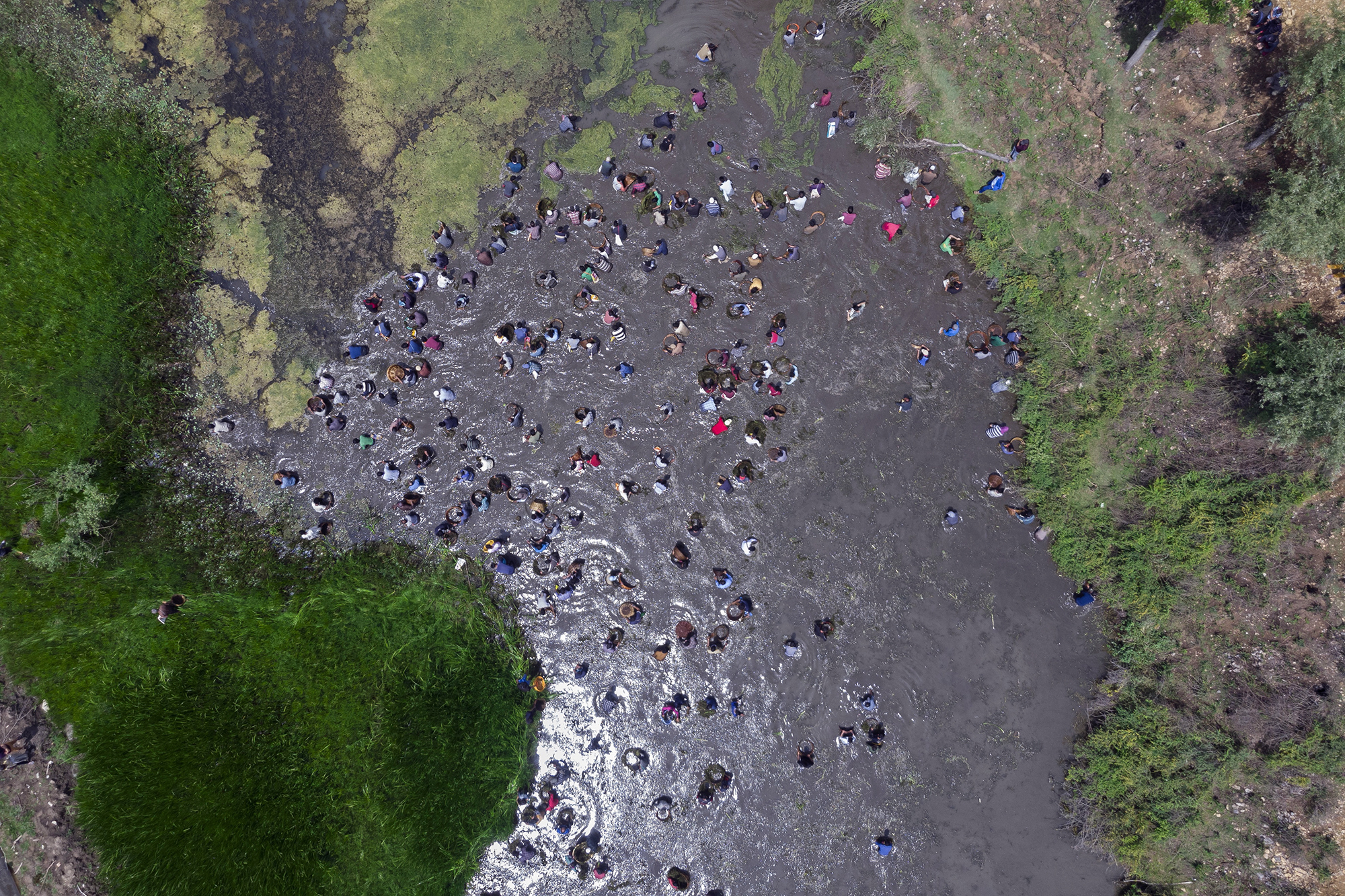 An aerial view of the fishing activity in Panzath Nag. The spring is accessible to the public only on the festival day and remains out of bounds for the rest of the year. Photo by Waseem Dar.

As to the governmental efforts to mitigate the problem, Hussain says saving the fragile eco-system of the Dal tops the [authorities’] priority list. “The Dredging Corporation of India (DCI) was assigned the job of removing the weeds, hyacinth and lily pads, and they use heavy dredgers for the physical control of weeds. Though very laborious, they are safe. The Lakes and Waterways Development Authority (LAWDA) has also started manual de-weeding of the Dal and Nageen Lakes, but this may become an unending job if not accelerated with machinery,” Aashiq told Mongabay-India.

However, Ahmad, the Deputy Inspector at Panzath Nag, says the benefit the collective fishing activity brings cannot be denied. “When a thousand or two people stir the waters, it is natural for the seepage to increase due to the unclogging of the capillaries and the removal of the submerged weeds. They did a good job by cleaning the holding dam nearby in 2019. Also, given that the practice has traditional importance for the people, we cannot stop them.”

When asked about the history of the festival, even the eldest of the residents are not aware. “This is part of our tradition since time immemorial. We inherit it from our forefathers from Maharajas’ era [1846-1947 A.D.]. They were equally clueless as to when this festival started,” said Mohammad Ibrahim, 60, a resident.

Panzath spring has a mythological relevance, finding a mention in Nilamata Purana and Rajatarangini, the legendary chronicle of Kashmir by Kalhana, the 12th-century contested Kashmiri historian. He calls it Naga of Pancahasta, a ‘pure’ spot where the river Vitasta — popularly known as Jhelum — was “brought to light a second time” by sage Kashyapa’s prayer after it had disappeared from fear of “defilement by the touch of sinful men.”

Today, however, the spring has got a village of saviours to conserve it, with most of them hoping to get it placed on Kashmir’s tourism map so that the authorities take better care of it. They believe the spring has excellent potential beyond nursing them and offering them a moment to feast once a year.

Banner image: Participants pull out weeds from the shallower areas of the Paznath Nag in spring while looking for fish. Photo by Waseem Dar.