“How will we survive?

What can we do now?

What will we eat?”

Hirabai Hugge, 65, spent a majority of her time over six months, thinking about these questions. In her constant quest for answers, the fluctuating local climatic pattern and associated uncertainty posed as barriers.

When floods hit Kolhapur in August 2019, Hugge, an agricultural labourer, says it took over 45 days for the fields to drain completely. After that, when work just about restarted, a few heavy rainfall showers further destroyed the fields.

The same story, she says, repeated two years later, post the July 2021 floods. “In 2021, after these heavy showers, there was a long dry period which affected crops like soybean and jowar (sorghum),” she recollects.

To clear her debt, she thought of working an extra shift of eight hours. But these variations in rainfall and their disruption of agricultural work, meant she couldn’t get enough double shifts. Despite her daughter-in-law pitching in, the Hugge family couldn’t earn enough to put food on the table because of the surmounting debt, deteriorating health, and lesser workdays.

To add on the troubles, for three months after both the floods, her cattle stopped milking, taking away her last income source.

Hugge’s search for solutions has left her consistently stressed and anxious, leading to high blood pressure. Her health has been severely declining since the 2019 floods, which has forced her to rely on medicines. In late 2020, she was diagnosed with hypertension. Now, for the past 15 months, every evening after work, she has taken an anti-inflammatory pain relieving medicine. “If I don’t take it, I won’t be able to get up the next day for work.”

While conclusive research is limited, anecdotal information and expert observations indicate links between the stress associated with climate variations that impact agriculture and the health of those that work in the sector.

Community Health Officer, Sachin Salave from Kolhapur’s Bhuye Primary Health Centre, confirms this. “There’s a rapid increase in hypertension and diabetes patients in the last two years.” Salave, who treats flood victims from roughly 15 villages, says, that the major cause for this is economic losses fuelled by changes in local climate, fear of another flood, and devastation caused by COVID-19.

In April this year, after working in the scorching heat with the temperature crossing 40 degrees Celsius, Hugge was fatigued and suffered constant spells of dizziness, forcing her to rest for a week – a time off that she could probably not afford.

Hugge says, she averaged 25 days of work every month before the August 2019 floods. “Now, even finding 15 days of work is difficult.”

Kiran Pawar, 35, a farmer from the nearby Bahiravadi region of Kurundvad town in Kolhapur, lost his entire sugarcane produce of 300,000 kilograms (300 tonnes) twice in the 2019 and 2021 floods. He explains why agricultural labourers aren’t getting enough work. “From 2019, the vatavaran (climate) has changed completely. Suddenly in peak summers it starts raining, followed by a long drought and last year we witnessed cold which has never been seen here before.”

These rapid changes affect farm productivity, impacting income and forcing farmers to find alternatives to hiring agricultural labourers that they can no longer afford.

For Pawar, these changes have affected the crop yield and he has been reporting reduced produce since the 2019 floods, which in turn has reduced his income substantially. “Floods take away at least four months of our peak season; now these climatic changes are further affecting the crops.” Since he can’t afford to hire agricultural labourers, he has started deploying more weedicides and herbicides.

Even as flood-affected farmers like Pawar are helpless, the climate disasters are further going to intensify, warns Roxy Koll, a climate scientist at the Indian Institute of Tropical Meteorology (IITM), Pune and a contributor to the UN’s Intergovernmental Panel on Climate Change (IPCC) report. “If we look at the trends in Maharashtra, we have fewer days with rainfall, but at the same time, the number of extreme events causing floods is increasing. So it’s long dry spells intermittent with short spells of heavy rainfall which is not good for agriculture,” he explains.

As per government figures, 50.40 lakh (5.04 million) hectares of fields were affected by rains, floods, and landslides in 2021. Of this affected area, Maharashtra accounted for about 9% or 4.55 lakh (0.45 million) hectares that was impacted during heavy rains and floods from July to November 2021.

Salave says he has seen a rapid change in people’s lifestyles in the region, as they cannot afford nutritious food because of the rising costs and dented income. The National Family Health Survey (NFHS) points to similar trends Salave mentioned. For example, the National Family Health Survey 2019-2020 report, measuring hypertension among adults, found that 31 percent of women in the Kolhapur district had elevated blood pressure. This is significantly higher than the 2015-16 survey where 13.2 percent of the women surveyed had blood pressure from slightly above normal to very high levels. In 2015-2016, 9.8 percent of women were diagnosed with high or very high blood sugar levels, which increased to 14.2 by 2019-2020.

Salave explains, “One of the major reasons for the rising cases in hypertension is the anxiety caused by two floods which have spiralled into a cycle of debt for many agricultural labourers.” Failure to clear the debt in time means rising interest amount which adds more to the stress. “Several of my patients talked about reduced opportunities for farm work because of the sudden rainfall. All of these events come together and cause tremendous anxiety, contributing to the increase in hypertension cases.” 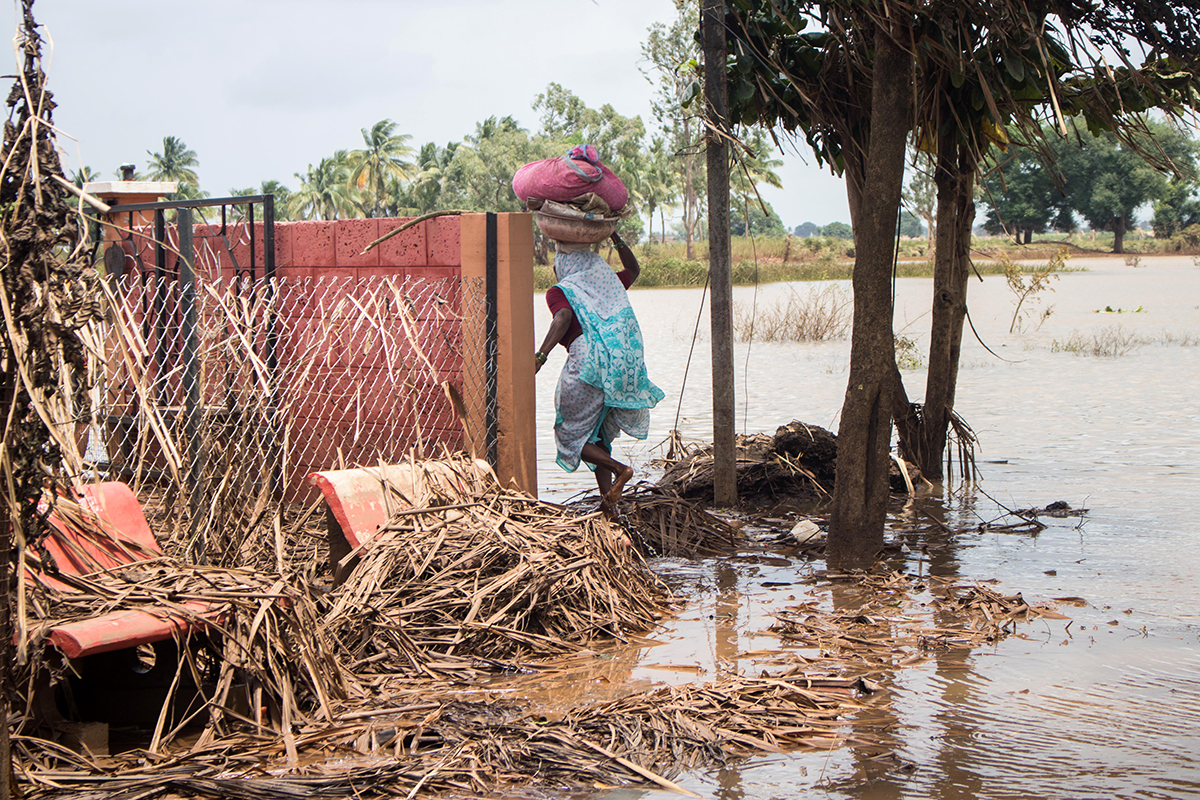 An agricultural labourer wades through the floodwater in Kolhapur’s Khochi village in July 2021. Photo by Sanket Jain/Mongabay.

Amruta Walimbe, a clinical psychologist and Director of Civicus Support and Resource Foundation, says, “Most psychological disturbance issues, imbalance, trauma or mental health problems hardly receive serious attention they deserve during the calamities.” In such a scenario, it’s the “rural marginalised women and girls who are the worst affected and invariably ignored.”

One of them is agricultural labourer Sunita Nikam, 46, from Kurundvad, whose house was destroyed in the 2019 and 2021 floods. Both times she was away from home for 15 days. “For three months, we kept cleaning the house, but the stench just wouldn’t go,” she recalls, teary-eyed.

She had plans to work two shifts to sustain, but, “Now I’ve to stop working by 12-12.30 p.m. because of the heat,” she says. Losing every hour’s work and fear of another flood are further fuelling her stress. Nikam, who relied on lemon juice for hydration in summers, talks of how lemons, now priced at Rs. 15 each, have become costlier, making that option unaffordable. “The lemons have become costlier than a painkiller now.”

Worried about supporting her family, she is forced to take a dangerous measure. “After the day’s work, I buy painkillers. I can’t afford to visit a doctor,” she says.

While painkillers alleviate her pain, she cannot find any solution to the rising anxiety. “I prefer sleeping empty stomach or merely drinking water, but I won’t take a loan. Looking at the climate, I know we won’t be able to repay it,” she says.

Walimbe, who has been working on making mental healthcare accessible, says, “Our healthcare system has failed to take an integrated and cohesive view of public health, and it lacks adequate and decentralised systemic measures to address such issues.”

“Create a system which will facilitate the work of providing assistance, guidance, and address issues at the individual, familial, and social levels,” she suggests.

However, logistics, especially proper healthcare infrastructure still play a crucial role. “Increasing budget allocation for health as a whole and mental health in specific, initiating and consistently running awareness programmes at the community level, schools is essential,” she recommends.

The latest IPCC report reflects the growing emphasis on addressing mental health challenges, including anxiety and stress, in vulnerable populations. Climate anxiety is expected to increase under further global warming, particularly for children, adolescents, the elderly, and those with underlying health conditions, the report conveys. Improving surveillance, access to mental health care, and monitoring of psychosocial impacts from extreme weather events could reduce mental health risks linked to climate change.

To systematically deal with such issues, Koll advocates setting a long-term vision. “Data is the main culprit because we don’t have that kind of health data to look into things like climate variability, floods, rainfall, temperature, and several such aspects and its impact on health,” he says. With proper data, he says early warning systems for healthcare issues can be established which can save several lives.

Meanwhile, Hugge stares at her sickle and says, “We are now tired of restarting life.”

Another day, another medicine.

Banner image: Sunita Nikam has been working as an agricultural labourer for three decades. It takes roughly three days for her to completely remove the dried sugarcane leaves on an acre of land. Photo by Sanket Jain/Mongabay.