The expert appraisal committee of the Indian Ministry of Environment, Forest and Climate Change has recommended the grant of environmental and Coastal Regulation Zone (CRZ) clearance for a big infrastructure and tourism project in Great Nicobar Island that will lead to the diversion of 15 percent of its forest area and the felling of 8.52 lakh (852,000) trees in phases. The project is being spearheaded by Andaman and Nicobar Islands Integrated Development Corporation under a vision plan conceived by the NITI Aayog. The island, mostly covered by forests, has not witnessed large-scale human activity so far.

While noting “the scale of impacts the proposed project may have” on the island’s flora and fauna and native populations, the committee, at its meeting on August 22 and 23, gave its go-ahead “considering the strategic nature of the integrated project” and the “submissions made by the project proponent.”

The main components of the Rs. 75,000 crore (Rs. 750 billion) project are an International Container Transhipment Terminal (ICTT), with the capacity to handle 14.2 million TEUs (unit of cargo capacity) eventually, a greenfield international airport handling a peak hour traffic of 4,000 passengers both ways, a township and a gas and solar power plant, said a pre-feasibility report for the Holistic Development of Great Nicobar Island prepared by AECOM India Private Ltd. for Niti Aayog. The airport would be “developed as a joint military-civil, dual-use airport, under the operational control of the Indian Navy,” going by information made available to the expert appraisal committee (EAC). The pre-feasibility report indicated that the first phase would extend to 2036 (from 2021), and the second phase would stretch from 2037 to 2051, but the container terminal would become operational around 2027-28.

The township will be made up of commercial, industrial and residential zones, but a major chunk of the land will be set apart for different types of tourism projects and activities. 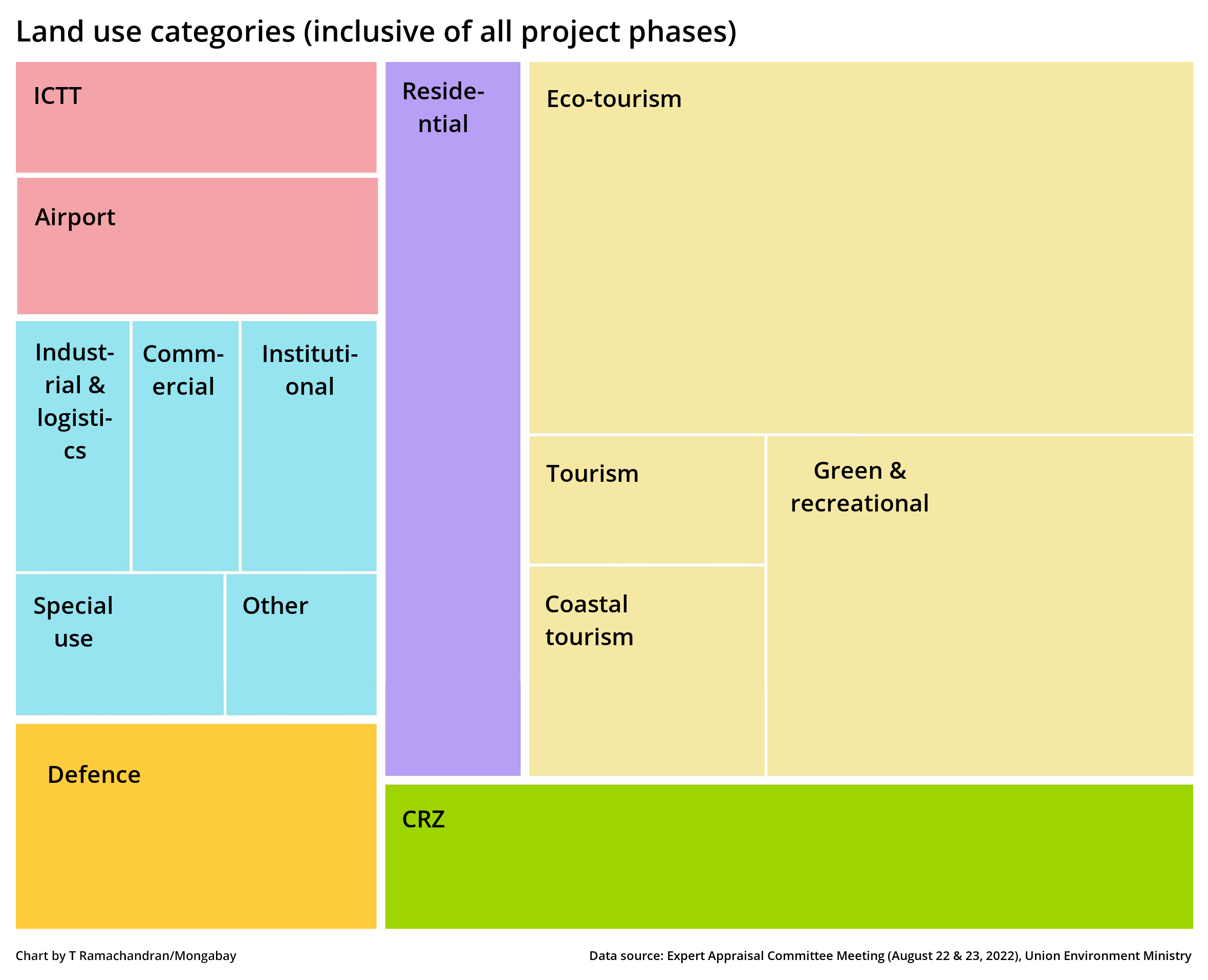 The EAC has imposed specific conditions for wildlife conservation and tribal welfare, mainly plans to do with leatherback sea turtles, Nicobar megapodes, saltwater crocodiles and several other species, as well as mangrove restoration, coral translocation and welfare of the local Shompen and Nicobari tribal population. Three independent monitoring committees are to be constituted to oversee aspects related to environmental management.

Read more: The container terminal that could sink the Great Nicobar Island

Over 95 percent of the 911-square-kilometre Great Nicobar island is made up of national parks, protected forests and tribal reserve areas, said official documents. The Great Nicobar Biosphere Reserve covers much of the largely unspoilt island. UNESCO said that the site, which is part of the World Network of Biosphere Reserves, covers “unique and threatened tropical evergreen forest ecosystems. It is home to very rich ecosystems, including 650 species of angiosperms, ferns, gymnosperms, and bryophytes, among others. In terms of fauna, there are over 1800 species, some of which are endemic to this area.”

The reserve encompasses two national parks. One of them is the Campbell Bay National Park, and the other is Galathea National Park. 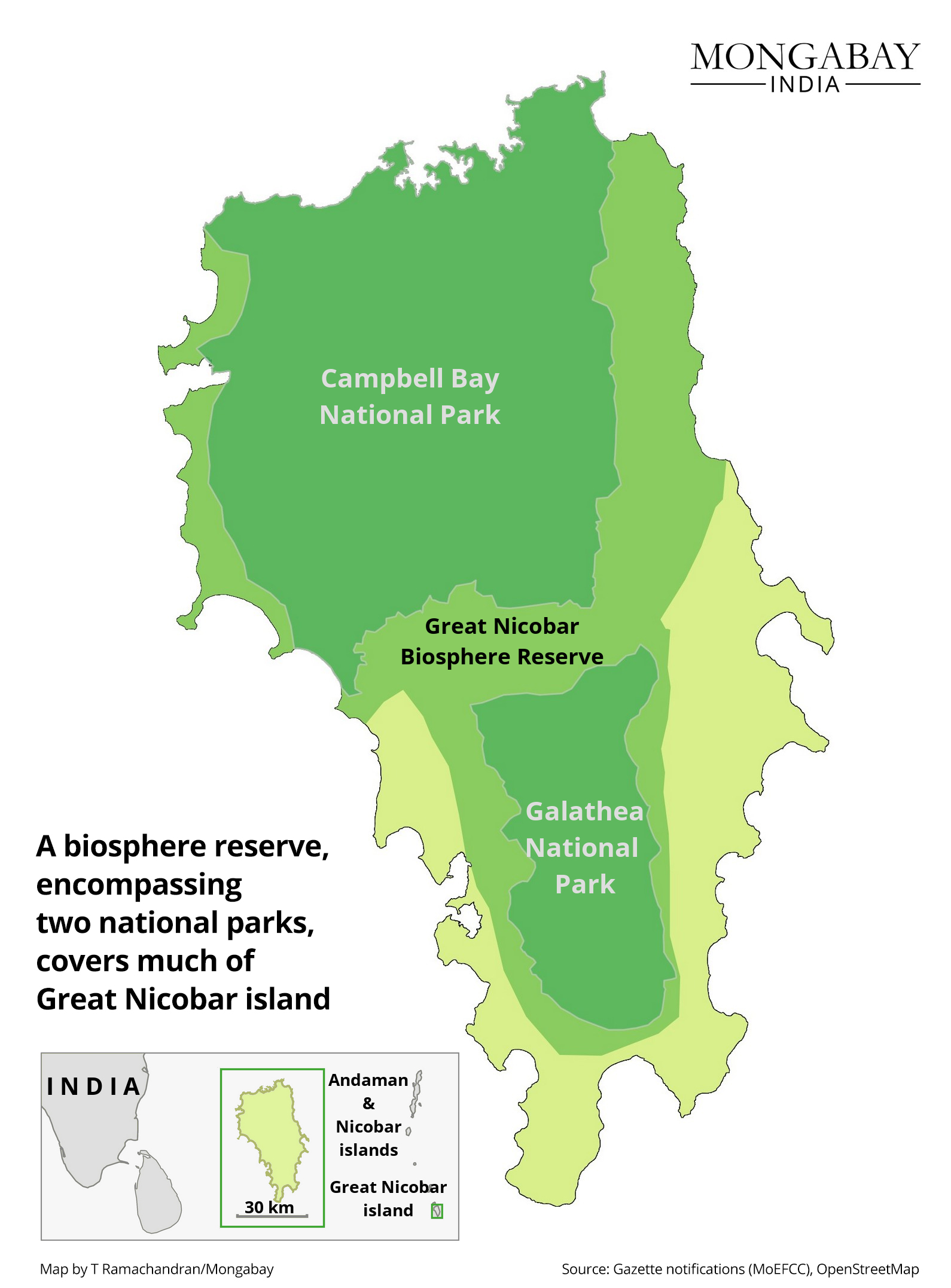 Forests and dense vegetation cover almost all of the island. Data based on recent satellite imagery indicates that only about 5-6 percent of the land mass, made up of beaches and water bodies, is without dense vegetation. Built-up areas, including villages, account for only a minuscule portion of the island area. Revenue land (excluding deemed forest areas) totals about 35 square kilometres. 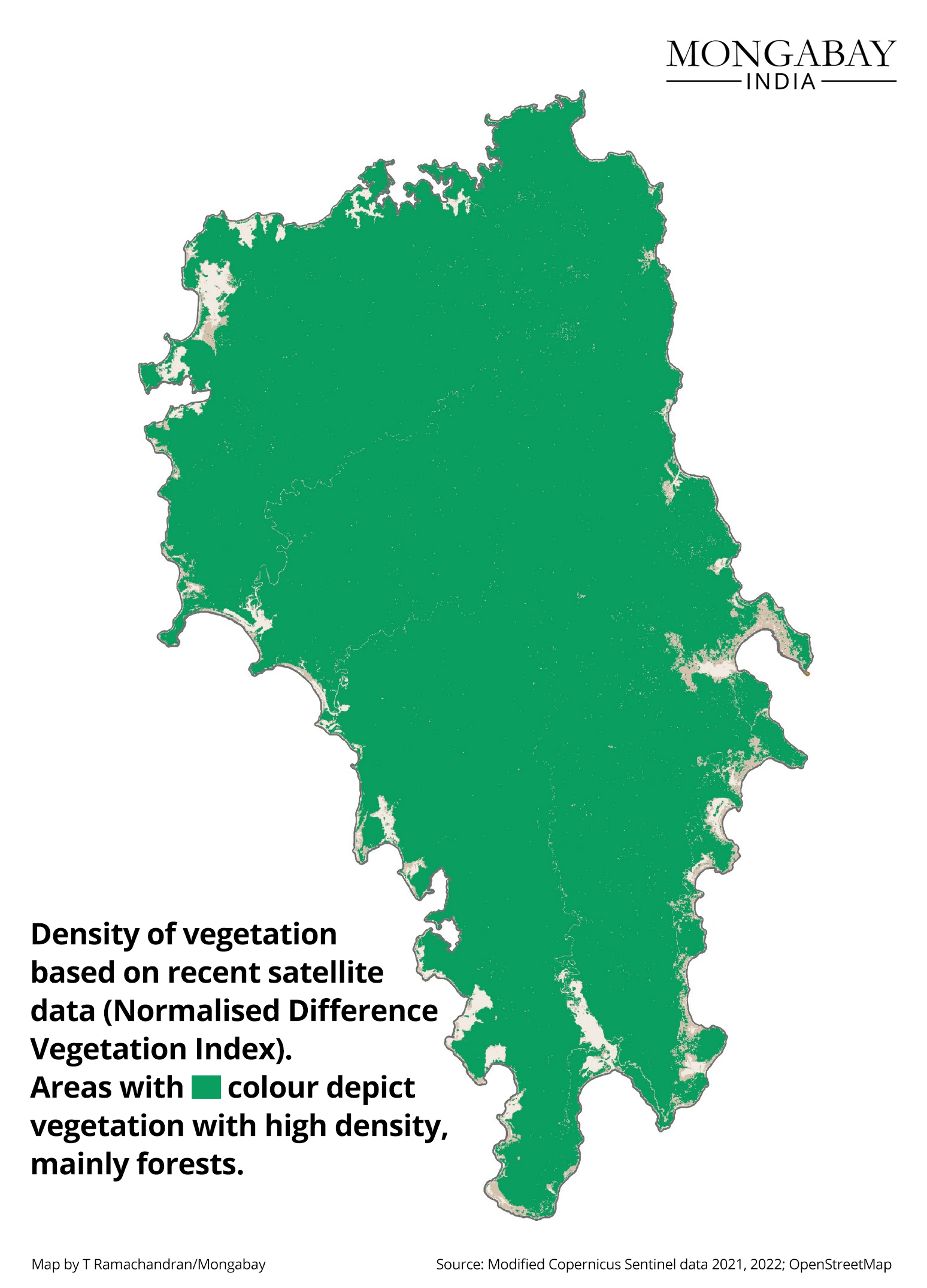 A long strip of the island predominantly covered by forests has been chosen for the implementation of the project. About 122 square kilometres of the 166 square kilometre project area is made up of forests, and nearly 9 square kilometres, are deemed forests. The northern tip of the project area falls well within the biosphere reserve, which means that about 71 square kilometres of the biosphere reserve area would also have to be earmarked for it. Galathea Bay, a major nesting site for leatherback turtles, was home to the Galathea Bay Wildlife Sanctuary. It was stripped off of its protected status and denotified recently. The central components of the project, the ICTT and the international airport are to be constructed in this part of the island.

The Galathea National Park adjoining the project area will be largely left without a buffer zone. Though a large part of the immediate project areas adjoining the park has been earmarked for ‘ecotourism’ where ‘major’ construction projects will not be allowed, the park area is likely to be exposed to the fallout of the large-scale construction and dredging activity that will ensue – about 421 hectares (4.21 square kilometres) of land is to be reclaimed for the port and airport. 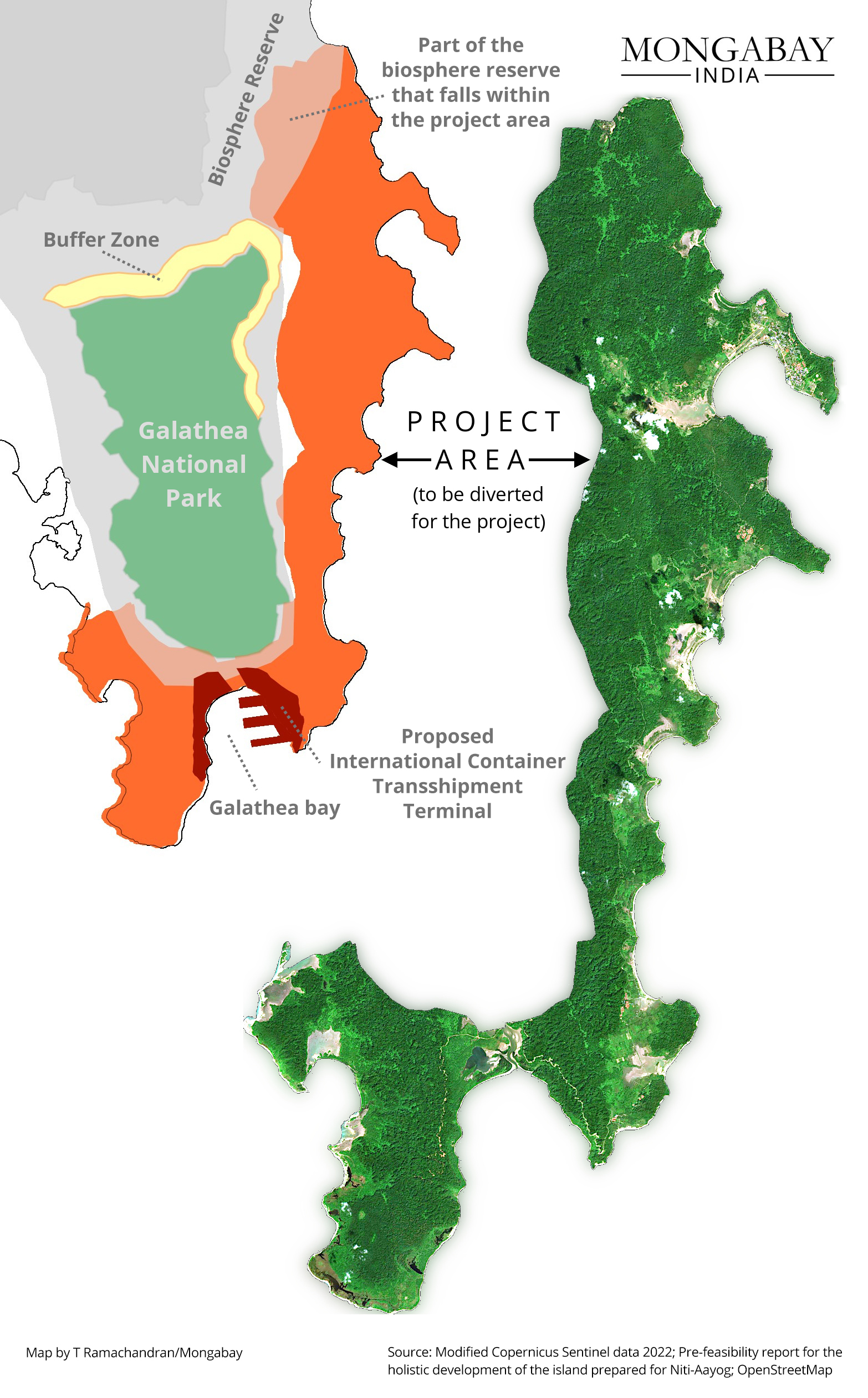 The setting up of townships and construction activity will result in a steep rise in the island’s population. Currently, the largest among the inhabited areas is Campbell Bay, which accounts for 69 percent of the population (about 8,400 as per the 2011 census; a recent official estimate puts the number of inhabitants at 12,000). A few habitations and revenue villages are distributed along the island’s Eastern coastal belt. This number will rise to 52,000 by 2025 as the project implementation gets going and 1.65 lakh (165,000) by 2040, said the pre-feasibility report.

The scale and intensity of ecological degradation on the island will be determined by the manner in which the project takes shape in the months and years ahead.