by Sahana Ghosh, Video by Kartik Chandramouli on 12 October 2018

Hailing from a fishing village in Manipur’s Loktak Lake, which has seen indigenous fish varieties flounder in recent decades, Tongbram Amarjit Singh’s dream project since his school days was to document and showcase the slowly fading traditional fishing practices of his community.

Mapping the decline in indigenous fish species, fish catch and the concurrent waning of traditional techniques of fishing through his grandparents’ and parents’ experiences, Singh was stirred to act to preserve and conserve a culture integral to the identity of his community.

Now a 35-year-old, Singh, an English translator at the state Legislative Assembly, has given shape to his dreams, with the help of his family and community, in the form of the Loktak Folklore Museum, in the island village of Thanga in Loktak Lake.

“While growing up we used to see our parents and their parents bring in steady amounts of fish both for consumption and for sale. Now due to growing population and environmental changes, the consumption and production is imbalanced. Indigenous species that form the mainstay of our diet are disappearing from the lake and so are the fishing tools,” Singh said.

To say fish (“nga” in Manipuri) is an important source of protein for the Manipuris is an understatement. About 90 percent of people in the state are fish eaters. Anything from 1 cm to 100 cm has value. Swimming in stews to smoke-dried to fermented (“ngari”), fish is ubiquitous. Social functions and ceremonies also involve fish. In the “nga-thaba” wedding ritual, for example, a pair of “ngamu” or snakehead fish (Channa gachua), is let go in water, symbolising the newlyweds’ journey. They relish fish and consequently fishing gears are customised to suit this dietary staple.

“But in some decades, these tools may go out of fashion and documenting them is important for our cultural memory,” Singh told this visiting Mongabay-India staff writer.

Loktak is northeast India’s largest freshwater body, a sub-basin of the Chindwin-Irrawaddy river of Myanmar and a Ramsar Wetlands of International Importance site. Of at least 200 species of indigenous fish in Manipur, Loktak, at present harbours 38 of them, researchers said.

Scientists at Manipur University and Zoological Survey of India (ZSI) blame changes in the hydrology due to construction of dams, blockage of migratory routes, drying up of wetlands due to siltation, eutrophication, water quality deterioration and overexploitation (open access nature of resource) for declining indigenous fish diversity in the lake.

As many 16 species of indigenous fish are believed to be extinct due to blocking of water by the Ithai barrage according to Manipur Governor Najma Heptullah. Capture of indigenous fish from the wild for trafficking for their ornamental value and absence of ban periods also add to the mix of conservation challenges.

“There was nothing you could not get from the lake. What little you get now is in a poor quality and quantity. There isn’t any pengba (Osteobrama belangeri) in the water,” said Mashinga, a former member of the women’s social movement “Meira Paibi” (“women torch bearer”), who sells waterchestnuts and fermented fish for a living. 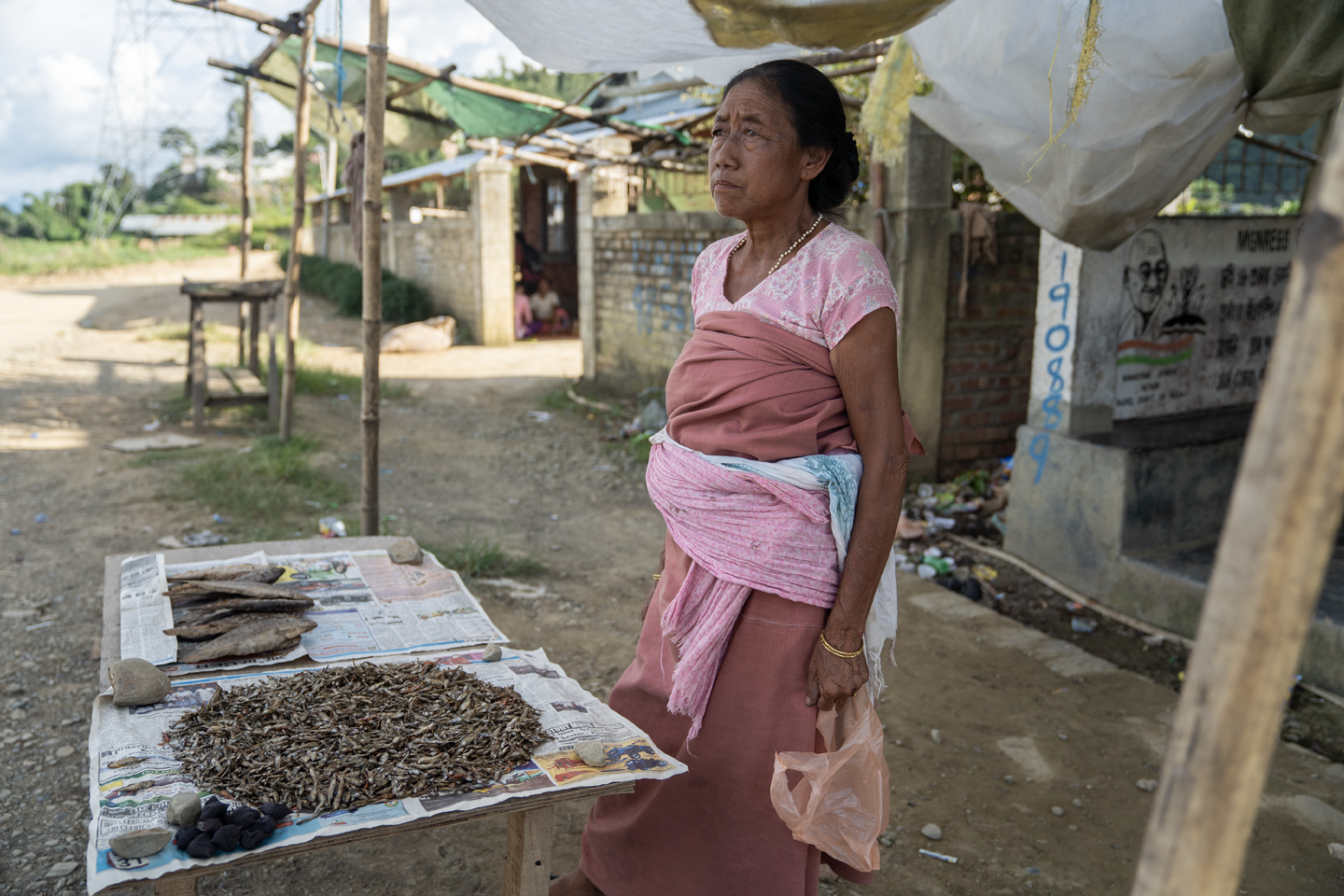 Mashinga depends on the lake for her livelihood by selling waterchestnuts and fishes she gets from it. Seeing the decline of fishes and the quality of the lake, she worries about the future of the region and its people. Photo by Kartik Chandramouli/Mongabay.

Pengba, a minor carp, is the state fish of Manipur and is reported to be “regionally extinct in the wild” due to obstruction of its migratory route from Myanmar on account of the Ithai barrage constructed three decades ago, said ZSI scientist Laishram Kosygin.

It is now mainly sourced from fish farms and is a prized delicacy both for its protein as well as for the price it fetches. In festive seasons, it can sell for as much as Rs. 800 per kg.

“During our grandparents’ and our parents’ time they did fishing in more traditional ways. Now it takes a lot more effort to catch a about a kilogram of fish through traditional gears in contrast to the period before the barrage. The effort does not translate in economic gains,” said Singh in the presence of his parents and siblings who have branched out to different professions.

They still fish but the condition of the Loktak Lake has rendered traditional fishery techniques economically infeasible, said Singh and members of his community.

Kosygin observed that before 1950s the lake, a breeding ground of indigenous fish, contributed 60 percent of the total fish production of the state of which migratory fish from Chindwin-Irrawaddy system formed 40 percent of the capture fisheries. In 2004, the lake was reported to fetch the state only about 11 percent of fish.

Fish diversity and yield plummeted in the last two to three decades, Kosygin said, following construction of the Ithai barrage across the Manipur River. According to Amarjit Singh, the constant high water level maintained in the lake for the functioning of the dam destroyed the breeding habitats.

“They (fish) prefer shallow areas for breeding. In addition, the run-off from chemical fertilisers used in agriculture also directly affects the biodiversity of the lake,” Singh said.

Before construction of the barrage, minor carps such as Labeo angara, L. bata, L. dero besides Pengba used to migrate from Chindwin-Irrawaddy river system of Myanmar to Manipur River and Loktak Lake upstream for breeding and spawning, said Kosygin.

“Their fingerlings migrated downstream with the onset of monsoon. Construction of hydraulic structures, particularly, the Ithai barrage blocked the migratory pathways of these riverine fish species. These fishes have already disappeared from the lake ecosystem,” Kosygin told Mongabay India.

In addition, as pollution poisoned the lake, it became tough for the native species to survive.

However, hardy Indian Major Carps (such as rohu, catla) and exotic species (grass carp), which were introduced into the lake, were able to brave and thrive.

“The fishery department of Manipur introduced Indian Major Carps along with common carps in the Loktak Lake in the 1960s. Although, there is no report on the formal introduction of exotic fish like Ctenopharyngodon idella, Hypophthalmicthys molitrix, Oreochromis mossambica in the Loktak Lake, they entered the lake through peripheral fish culture farms,” Kosygin added.

Veteran researcher Waikhom Vishwanath of Manipur University noted that the introduced fish varieties are also prolific breeders, expanding their population significantly while the population of native fish was not able to compete with the new arrivals.

“Such is the condition that native species are fighting a losing battle in their own habitat, and now the lake is dominated by the exotic carps,” Kosygin lamented.

LED illumination messes up the lifecycle of fish. The time required for their resting and feeding, changes, said Waikhom. “It really disturbs their day-night cycle, they mature early in more light and the eggs they bear will be less in numbers,” he said.

“So if you want to revive those old techniques then there should be proper water level and it should be replenished by the freshwater from rivers during the rainy season, then water quality will improve and population of native fish will also go up but that is not happening,” said Waikhom.

In 2011 International Union for Conservation of Nature (IUCN) listed 15 fish species from eastern Himalayas, including seven from Manipur as “endangered freshwater fish species”.

However, there is hope, believe Waikhom and fellow Manipur University researcher Rameshwori Devi.

“There are more than 200 indigenous varieties and we are updating the list with discovery of new species. We are also looking at hill streams. More of them (indigenous species) are adapted to hill streams so even if Loktak Lake is deteriorating due to pollution and water flow changes, in hill streams they are present,” Waikhom said.

The researchers have urged the state government for the exploration of indigenous varieties, their conservation and if possible, exploitation in a sustainable manner using laboratory breeding techniques.

“There is legislation on paper  (Manipur Fisheries Act 1988) but to implement them in hill areas is difficult. Some villages are much aware of the problem of loss of diversity and they have started certain restrictions in fishing in collaboration with NGOs,” Waikhom said.

On the agenda is conservation of habitats. “There are few species that will survive and breed only in pebbles and sands. But sands are being mined out for construction and their feeding and breeding habitats are being destroyed. So there needs to be restriction to preserve these breeding grounds,” he said.

Since most of the food fish are also ornamental in nature, Rameshori stressed on the necessity to clamp down on trafficking.

“Most of the food fish in their juvenile stages have ornamental value. The Chocolate Mahseer (Neolissochilus hexagonolepis) and our state fish, for example, are quite popular aquarium fish. The problem begins when people capture them from wild. Captive breeding can be sustainably used. DNA barcoding can help in identification and control of trafficking,” she said. 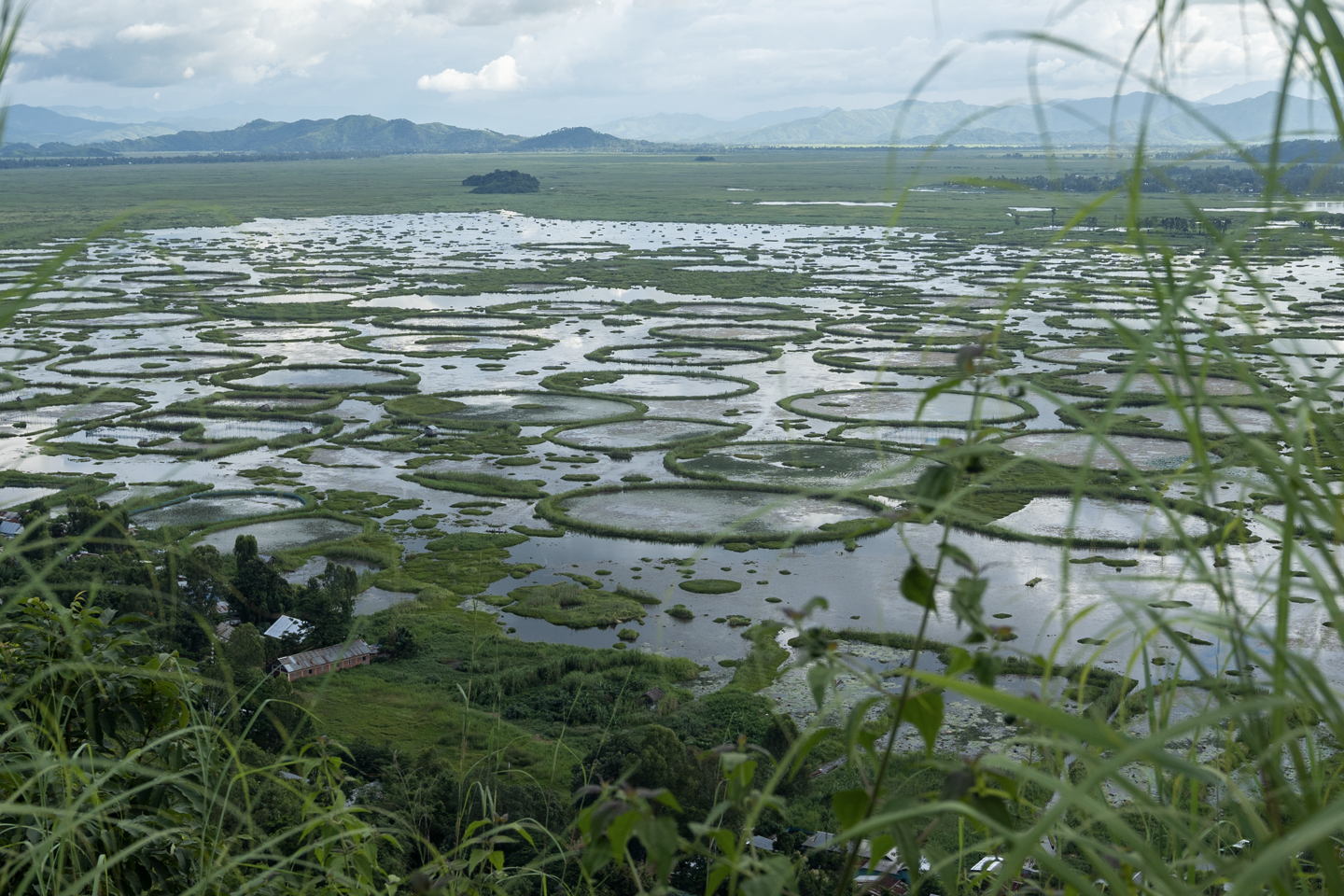 The fish production from Loktak lake dropped from 60% in the 1950s to 11% in 2004. Numerous native fish species have either gone extinct or have become endangered. But scientists believe that conserving the hill stream habitats can save the indigenous fishes of Manipur from going extinct

However, Mashinga has different concerns.

“Youth is no longer interested in traditional vocations, they have aspirations and environmental changes have driven them to pursue different fields. Who will look after our water bodies,” lamented Mashinga as she laid out batches of fermented fish for potential customers.