Will dhole packs continue roaming the forests of the Western Ghats?

Carnivores of the wild have always fascinated the human race. Worldwide, extensive efforts have been made and large fortunes spent to revive the number of some of the top predators in their natural habitat. But not all these efforts have borne fruit.

Several species of carnivores have been witnessing a global population decline. The Asiatic wild dog, also known as dhole (Cuon alpinus), has been added to the list. It is declared as Endangered in the IUCN Red List.

A recent study, published in the journal Scientific Reports, examined the distribution and population dynamics of dholes across 37,000 square km of the Western Ghats, first in 2006-7 and subsequently in 2014-15. From 62 percent, the occupancy (the area over which dhole signs were recorded) dipped to 54 percent.

“Dholes are among the most threatened yet under-studied species in India and across the world. They are apex predators with fascinating social lives, and quite unique in that they are among the very few carnivores that are both forest-dependent and group-living,” said study author Arjun Srivathsa from Wildlife Conservation Society-India and the University of Florida.

“We know little about their populations and there is a critical need to better understand their ecology so that they can be conserved using strategies backed by science,” he added. 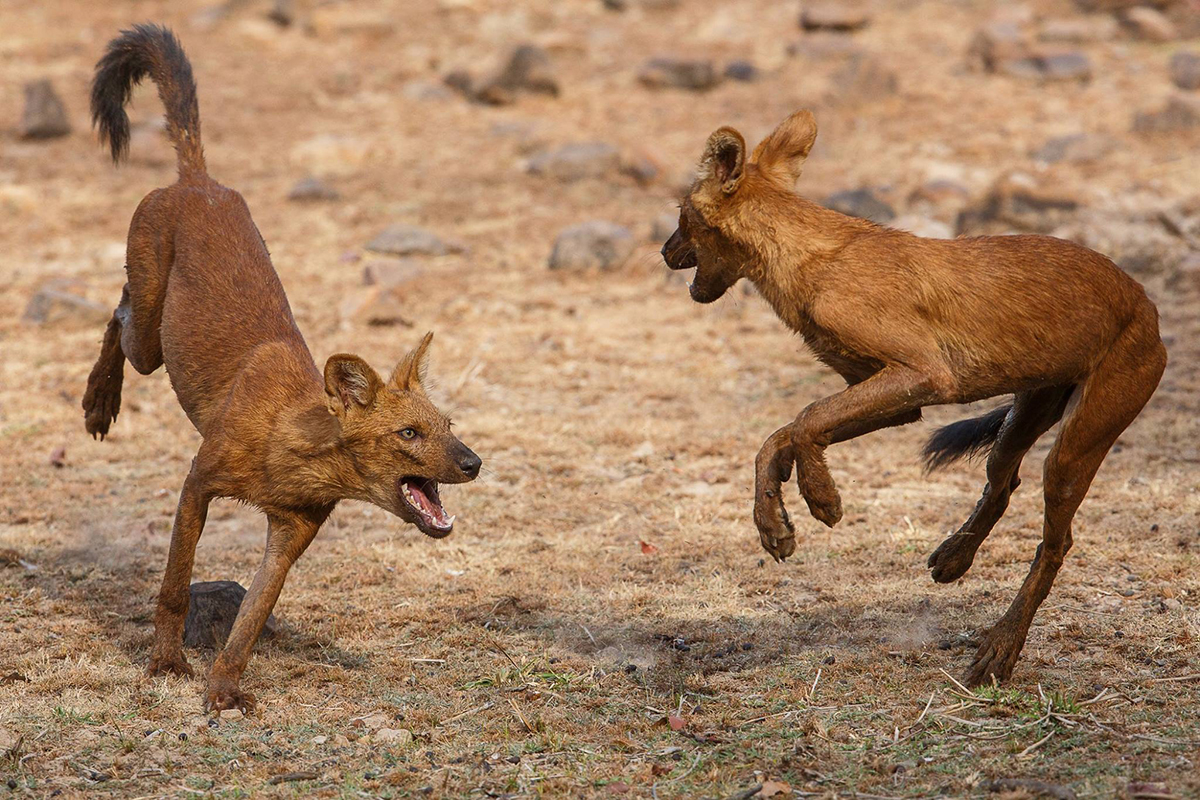 The dhole or Asiatic wild dog is a social, pack-hunting predator which lives in the tropical forests of south and southeast Asia. Photo by Ismail Shariff.

The study was done based on indirect sign surveys using dhole scats and spoors (animal signs like pugmarks and movement signs). While 267 dhole signs were observed in the 2007 survey in selected grids across dhole habitat in the Ghats, the number dropped to 251 in the 2015 survey.

The current study inspected movement between the subpopulations and examined local extinctions. Colonisation, as per the study, is a location that did not have dholes in 2007 but has been occupied by dholes in 2015; local extinction implies a location that had dholes in 2007, but no longer had any as of 2015. The study concluded that while the colonisation rate of the dhole population was higher than the extinction rate, taken together and considering the entire landscape, the total area where dholes went locally extinct was greater than the areas where they colonised.

The researchers discovered that colonisation took place mostly in locations within and around protected areas in a clustered, restricted manner and thus concluded that buffer zones around the protected areas play an important role in revival of the dhole population.

“While the interiors of protected areas might have stable forest cover and prey densities, the locations adjoining protected areas require management intervention. These locations are sensitive to colonisation of dhole population and thus should be safeguarded,” said Srivathsa.

Increased protection in reserves in the Western Ghats has enabled population recovery of tigers and leopards but, according to the study, the dhole population has not benefited.

“Tigers and leopards are more resilient than dholes. Leopards survive and thrive in a wide range of habitats. Tigers do need forest cover but they are also able to disperse long distances through mixed landscapes with forests and human-use areas,” said Srivathsa.

“Dholes are perhaps a lot more sensitive to forest cover and therefore require more nuanced approaches for population recovery. Competition and disease threat from stray/feral [domestic] dogs are very likely compounding the issue but we do not know enough about these dynamics yet,” he added.

The dhole is on the International Union for Conservation of Nature (IUCN) Red List of Endangered Species and is protected under Schedule II of the Wildlife Protection Act, 1972 in India.

Globally, dholes have disappeared from approximately 82 percent of their former range. The Western Ghats perhaps supports the largest dhole population in the world and is therefore a critical conservation landscape for the species. Understanding changes in their distribution is important for prioritising and implementing conservation strategies, write the authors. 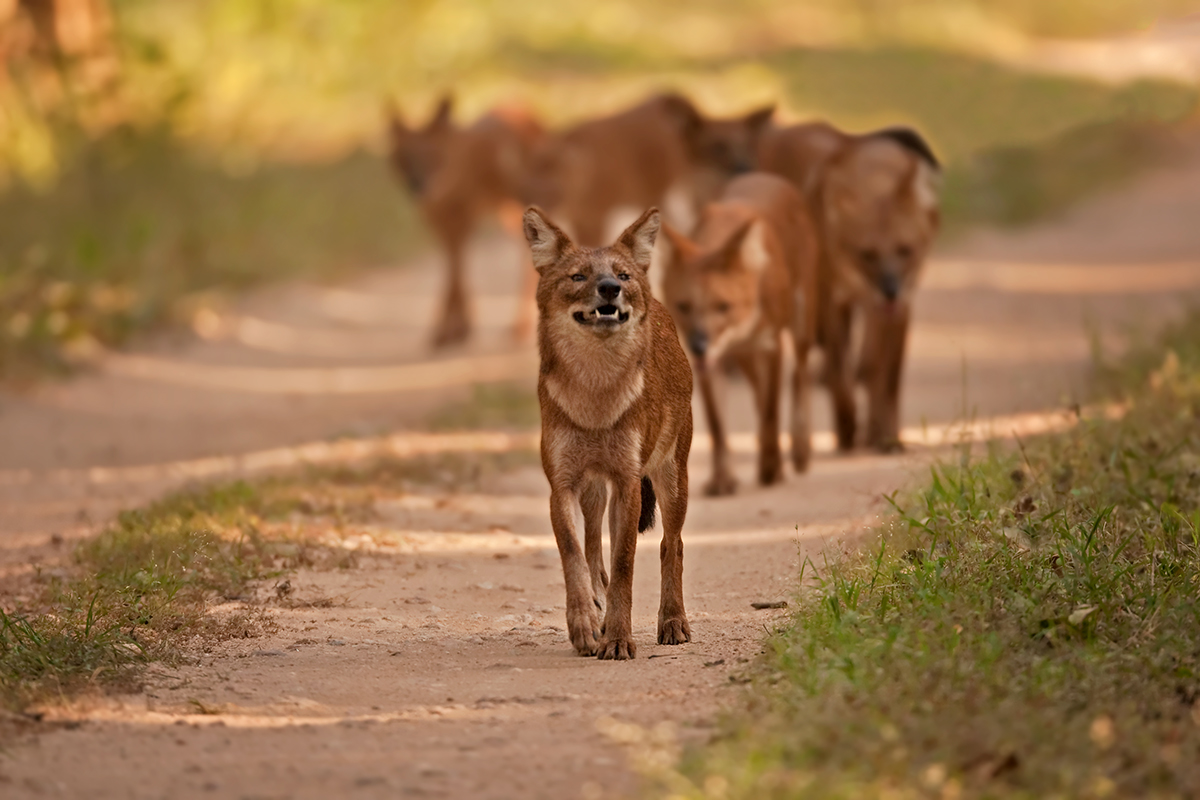 Dhole occupancy in Karnataka’s Western Ghats reduced by 13% between 2007 and 2015. Photo by Ramki Sreenivasan.

What ails the dhole population in the Western Ghats?

Massive infrastructural initiatives in the area, human intrusion in protected zones, change in land-use pattern, forest fragmentation and loss of forest cover are some of the reasons that researchers attribute to the decline in dhole occupancy in the Western Ghats. According to the study, the cumulative impact of all these factors has been impeding the range expansion of dholes in the region.

The presence of semi-feral, free-ranging domestic dogs in unprotected forest areas might be another reason for the decline in dhole occupancy, says the study. Free-ranging dogs affect dholes as they compete with dholes for similar resources like prey animals. Moreover, these dogs often carry lethal and non-lethal disease pathogens that could result in the spread of diseases in the dhole population.

“Local hunters sometimes use domestic dogs to chase dholes away from their kill. Although we could not test the interaction between the two species, we suspect that dogs continue to pose a latent threat to dholes outside reserves,” said Srivathsa.

The study made use of the relative abundance of livestock as a metric to characterise disturbance in the study area and concluded that the presence of livestock in and around the protected areas is detrimental to the dhole populations.

The problem with livestock presence in forest habitats is two-fold, explain the authors in the paper. Large herds of cattle, often accompanied by herders and their domestic dogs, pose a direct disturbance to dholes, who generally avoid areas with high human activity. At the same time, livestock compete with wild herbivores for forage and end up driving away animals that make for prey for dholes. The consequent decrease in prey density due to lack of resources indirectly affects the quality of potential dhole habitats, says the study.

The authors suggest that reduction or total removal of livestock grazing from protected areas can be crucial for the recovery and sustenance of dhole populations.

The researchers also opine that a rich forest cover is of utmost importance for dholes because it maintains good densities of herbivore prey species.

“It is not enough that we only focus on dholes within protected areas because populations across a landscape need forest connectivity. Massive forest clearances outside reserves hamper connectivity for dholes and can, therefore, be detrimental for the species,” Srivathsa explained.

According to the study, geographic and demographic isolation too plays an important role in maintaining dhole populations. Isolated populations of large carnivores have higher chances of becoming locally extinct. Moreover, with no new individuals coming into the population, it can also lead to inbreeding, making the animals more vulnerable to diseases. 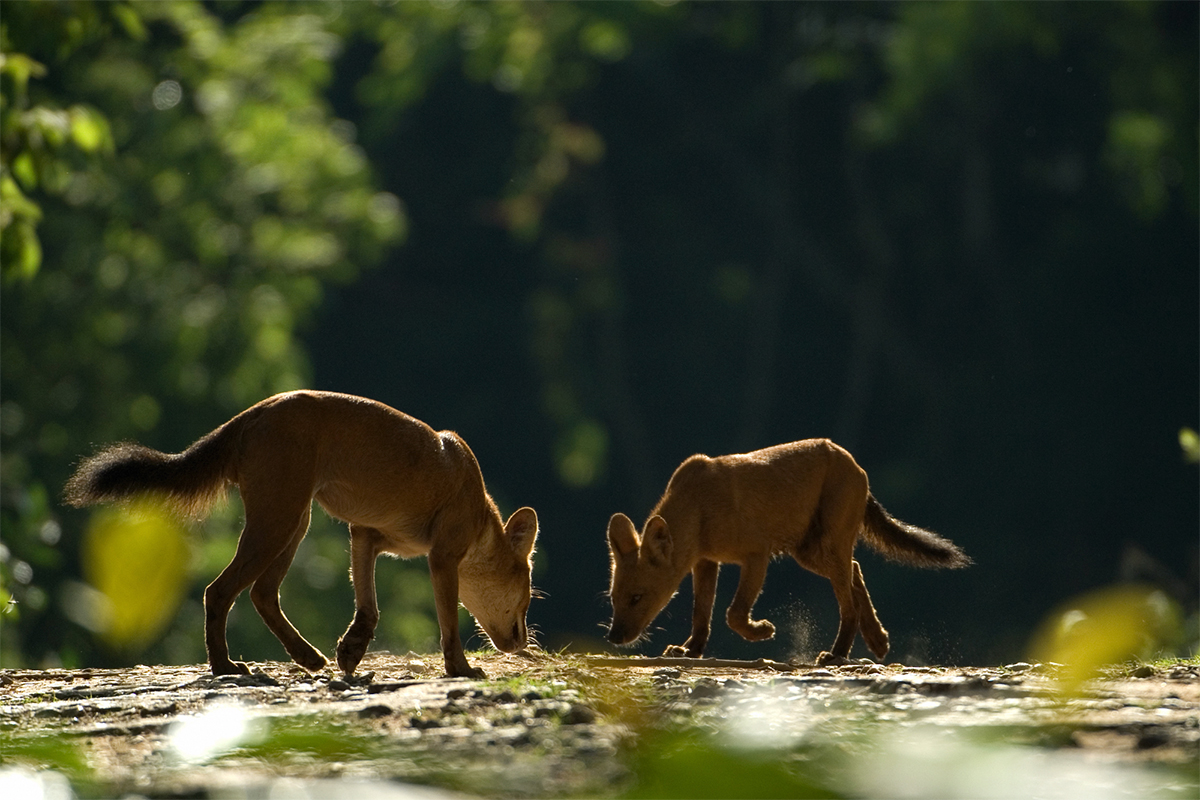 Infrastructure projects, human intrusion and overgrazing pose a threat to the dhole’s habitat and its prey species. Domestic dogs (ferals/stays) are a threat too. Photo by Kalyan Varma.

Suggestions to arrest the decline

Researchers feel that for any forest-dependent wildlife species, including dholes, ‘eco-sensitive zones’ that buffer the boundaries of protected reserves across the country can function like breathing rooms and, thus, should be given due importance.

According to Srivathsa, areas abutting protected reserves should support the spill-over of animals and help maintain connectivity with other protected areas. “By reducing the amount of area under eco-sensitive zones and clearing forests for other commercial purposes, we put forest-dependent wildlife species in a zoo-like situation with no habitat beyond the confines of reserve boundary,” he said, stressing on the importance of wildlife-permeable land use.

Creating coffee and tea plantations and fruit orchards in some parts of the Ghats (outside reserves) and carrying out afforestation activities around already established protected areas might work. Researchers are of the view that instead of reducing eco-sensitive zones for destructive infrastructure projects, coffee or tea plantations, which act as secondary habitats for dhole as well as prey species, would be more beneficial to the dhole populations. 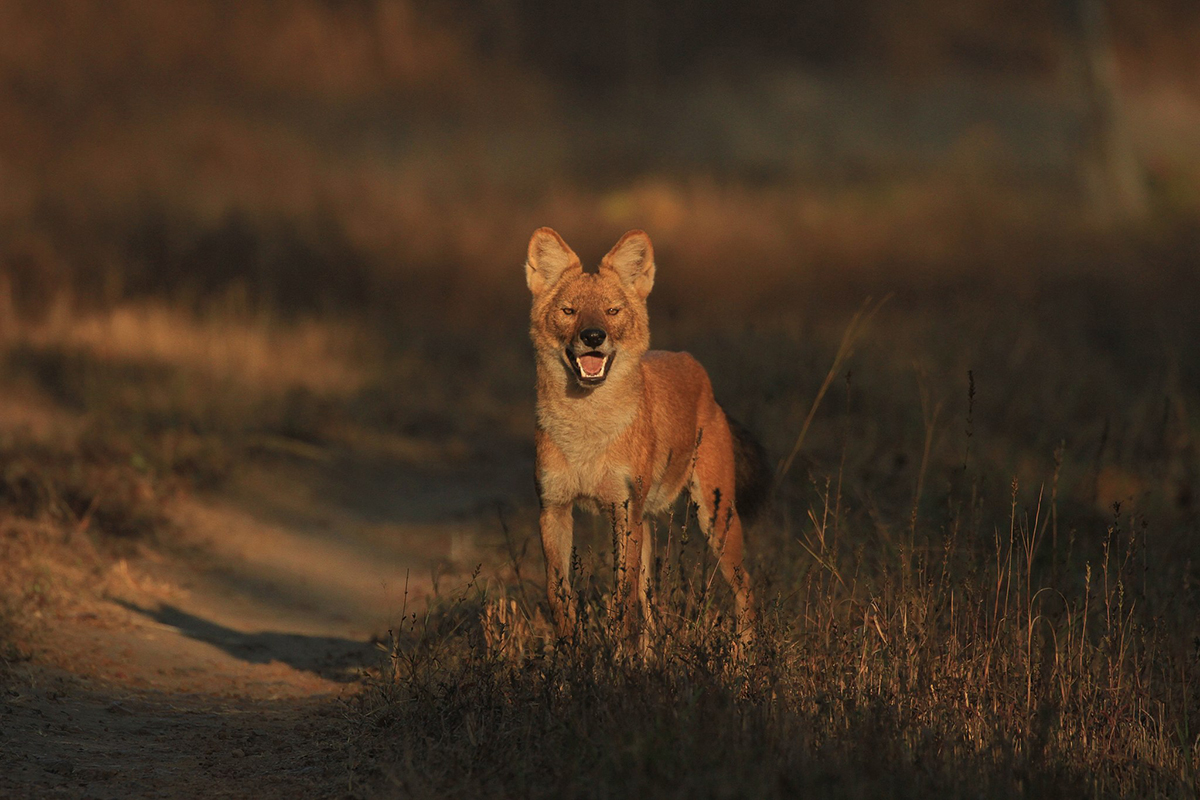 Experts suggest the formation of eco-sensitive zones to buffer protected areas could help maintain a healthy population of dholes. Photo by Davidvraju/Wikimedia Commons.

Banner image: The dhole or Asiatic wild dog is an endangered under-studied species in India and across the world. Photo by Ramki Sreenivasan.