The fragrance of Avicennia marina (the grey mangrove), the most widely-spread mangrove species in Mumbai, makes the trail pleasant despite the 36 degree Celsius hot and humid conditions.

Adgaonkar relishes the scent as she walks in a single file with a forest guard and two helpers, towards one of the mangrove nurseries they set up on the city’s coastline. She gives the team instructions on where to plant saplings along the course and shares tips to identify some of the species with their regional and scientific names.

“You’ve to know everything that is associated with your job to do it well,” said Adgaonkar, about her erstwhile role as a Range Forest Officer (RFO), which included mangrove plantation and guarding the ecosystem that borders Mumbai.

In some parts of the city’s tangled mangroves, she and her team members carry ropes and hooks to pull themselves to safety. They have also learned from crab catchers the technique of using a wooden plank to wade through the dark muck in mangroves and mudflats. Adgaonkar can navigate boats, big and small, through the creeks and estuaries of the coastal city.

Until recently, she was one of the four range forest officers at the Mumbai Mangrove Conservation Unit (MMCU), a 36-member body, solely dedicated to protecting the city’s mangrove forests. With a recent promotion, Adgaonkar is on to using her skills and experience to train the next generation of guardians of Maharashtra’s forests.

The MMCU falls under the Maharashtra forest department’s Mangrove Cell, the only unit in India that specialises in mangrove protection and conservation. The cell was established in 2012 following a 2005 Bombay High Court order to declare all mangroves under government land as protected forests. 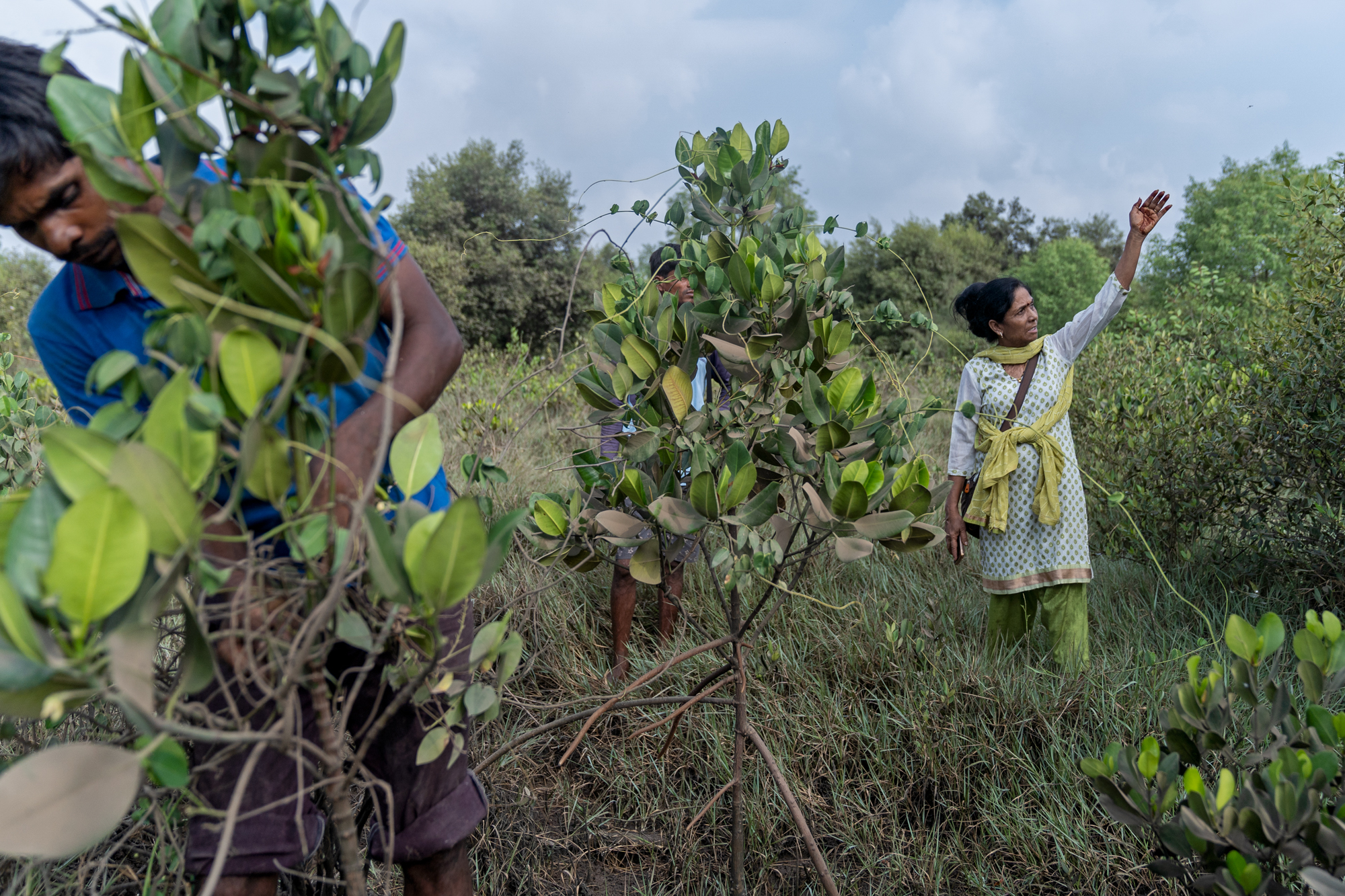 Seema Adgaonkar, a Range Forest Officer with the Mumbai Mangrove Conservation Unit until recently, stands next to mangrove saplings planted by her team and instructs the helpers regarding other tasks. Photo by Kartik Chandramouli/Mongabay.

Without its mangroves, coastal Mumbai vulnerable to flooding

The clearing of mangroves in many areas of the city, particularly along the 18-km-long Mithi river, was cited as one of the main reasons for the unprecedented flooding in 2005. Mangroves act as natural buffers against flood surges by absorbing impact and breaking the flow of water. Their absence leaves the land vulnerable to flooding.

The peninsular city facing the Arabian Sea is densely populated with 18.41 million people (Census of India, 2011) and is one of the cities most vulnerable to rising sea levels. Erratic rainfall and sea level rise due to climate change can increase the frequency of coastal flooding in the city. Experts warn that the likelihood of a 2005-like flood in Mumbai could more than double, and the losses could triple by 2080.

Read our story on this year’s Mumbai floods: Why the city that never stops comes to a standstill when it rains.

“They also store large amounts of carbon, are habitats for many wildlife species, and provide crucial nursery areas for young fish and crustaceans that are vital for fisheries,” he added. A 2013 study estimated a conservative valuation of the mangrove ecosystem in Mumbai at $7.73 million per year, factoring a range of services it provides.

The landmark judgement by the Bombay High Court in 2005 banned the destruction of mangrove forests and construction work within 50 metres (m) of mangrove areas in Maharashtra.

According to the Forest Survey of India, the government organisation that conducts surveys and assessment of forest resources in the country, the mangrove cover in Mumbai increased from 42 square km in 2005 to 66 square km in 2017. But a rapid surge in urbanisation and population continue to threaten these crucial ecosystems.

Speaking about some of the patterns in which offenders clear a patch of mangroves, N. Vasudevan, Additional Principal Chief Conservator of Forest, Mangrove Cell, said, “People block the tidal flow, dump construction debris, make it a parking spot or erect a shrine. A dedicated unit was very important to manage a complex city like Mumbai. We started MMCU in 2013, with its own Divisional Forest Officer, Assistant Conservator of Forest, Range Forest Officers and guards who kept a strong vigil and ensured that there are no new encroachments. But it still happens in places.”

The woman who protects our natural coastal soldiers

“We serve the forest,” said Adgaonkar, who was the only female officer among the four RFOs managing four distinct divisions in Mumbai when Mongabay-India interviewed her.

“It’s primarily a field job. We keep a vigil on boundaries, perform natural and artificial mangrove regeneration, catch offenders, and bring them to court. We are bound to the duty 24×7. It is equivalent to the Senior Police Inspector in the police force,” she said.

Back amidst the nursery and plantation, Adgaonkar is delighted by the different root patterns, buds, and flowers developed by the saplings planted by MMCU over the years. In the unit, she was known for her expertise in mangrove plantation. Despite having a background in terrestrial afforestation, she agreed that mangroves are a different ballgame due to the nature of the habitat and tidal behaviour.

Initially, it was a personal challenge too. Hailing from a drier and interior region of Maharashtra, she said her idea of mangroves, mudflats, creeks, tides were all theoretical before she saw mangroves for the first time in Mumbai. After the training provided by the Mangrove Cell, many discussions with mangrove experts, consulting field guides, especially books by regional authors, and a few rounds of failed attempts at plantations, she finally gained confidence.

Garbage and debris dumped in the mangroves are choking the ecosystem said Adgaonkar. “Pneumatophores [aerial roots of mangroves specialised for gaseous exchange] get suffocated by plastic. The water flow also gets obstructed, eventually killing the trees.” Government-citizen partnership cleaning drives are attempting to turn the tide. One such drive that spanned from 2015 to 2018 gathered 25,000 volunteers and cleared 8,000 tonnes of garbage from mangrove areas in Mumbai.

“It’s a perfect example of swarth (selfish objective) and parmarth (greater good),” explained Adgaonkar. “Swarth because we get the mangroves cleaned this way and parmarth because there’s awareness in the hearts of the people, and the environment is protected.”

A degree in botany and a national level athlete, she always dreamt of working in a field where women were under-represented. That led her to choose forestry and to be part of the first batch of female field officers in the Maharashtra forest department in 1984.

“A woman officer faces a lot of neglect and demotivation. But my experience in social forestry before joining the MMCU showed that it was easier for me, as a woman, to talk to women in rural areas. I could enter their kitchens and talk to them about forest protection since they enter the forest the maximum to collect resources,” she said. “If a government scheme has to be implemented in any area, especially rural, the role of men and women officers is equally important.”

Adgaonkar and Vasudevan agree that one of the most challenging tasks to safeguard mangroves is the removal of illegal encroachments and slums. “It’s very difficult to demolish illegal structures and slums encroaching mangrove areas. There are social and political pressures from all sides on us,” admitted Adgaonkar. But it’s a duty that she has to carry regardless of the risks involved.

“She is a very bold lady. She does a lot of plantation activities, but she leads many encroachment removal activities as well,” said Vasudevan.

Mangroves are spread across 150,000 square km across the globe in the tropical and subtropical regions. India contains nearly 3.3 percent of this mangrove cover.

“Mangroves are particularly sensitive to the rising sea level,” said Laurance, addressing the global threats to mangroves. “A big worry is that mangroves are getting crushed in the middle,  squeezed by land-use development on the land side, and by rising sea levels on the other. Given their critical biological and social benefits, it seems almost crazy that people are currently destroying mangroves so quickly – often for coastal development.”

In India too, the natural defenders of the coastline are under pressure from human development.

Environment activist Debi Goenka said, “Government projects along the coast of Mumbai in fact pose the biggest threat to the mangroves.” He fears that since climate change is not part of any decision-making process yet, the city might end up back in its original form, as seven independent islands.

But Adgaonkar remains hopeful and believes that the government, environmental groups, and citizen awareness together can help protect the environment. She’s sure that the fate of the mangroves and the city are intertwined.

“If mangroves are saved, Mumbai will be saved. Else these big towers will fall like leaves.” 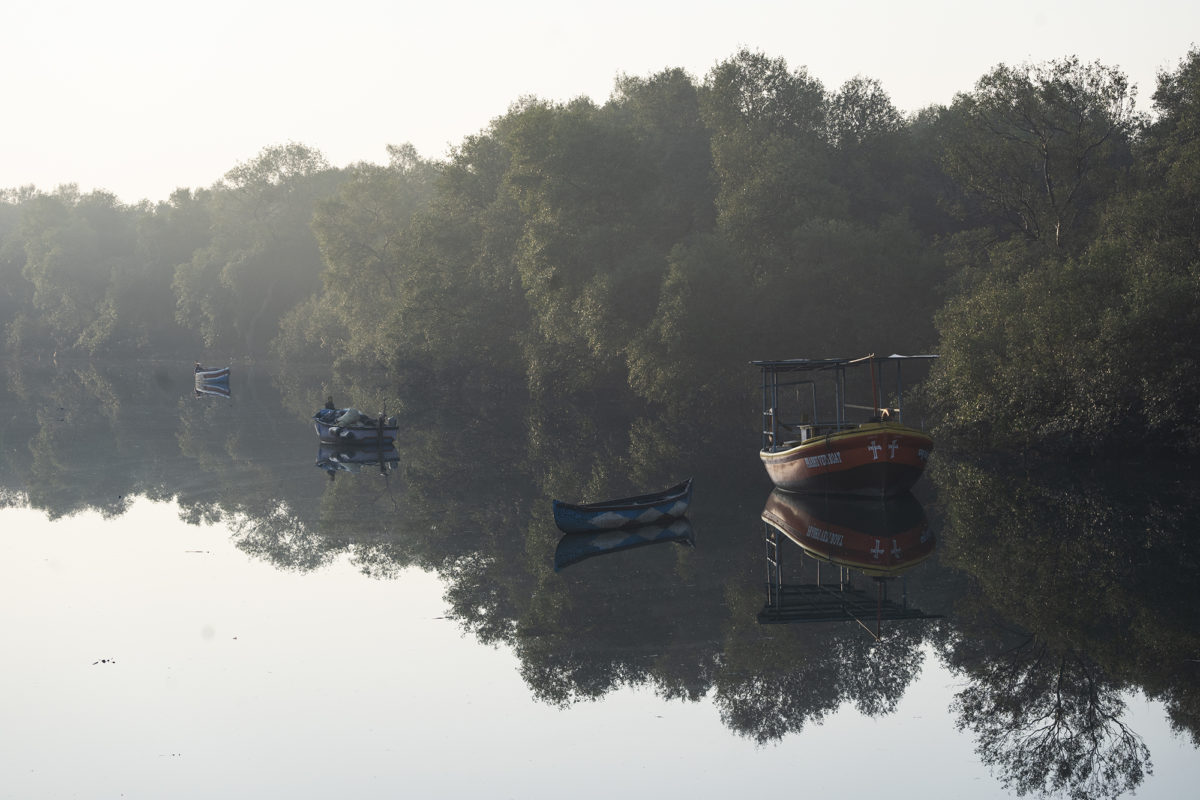 Banner image: Seema Adgaonkar, until recently a Range Forest Officer with the Mumbai Mangrove Conservation Unit, surrounded by mangroves and associated species on a trail to a nursery set by the MMCU. Photo by Kartik Chandramouli/Mongabay.