Quest for the perfect brush stroke puts the mongoose at risk

On the evening of October 24, law enforcement officials kicked down doors of multiple factories and warehouses across six Indian states. The raids were the result of ‘Operation Clean Art’, a coordinated operation organised over two months by the Wildlife Crime Control Bureau (WCCB), a statutory body under the Ministry of Environment, Forests, and Climate Change (MoEFandCC) along with assistance from the Central Bureau of Investigation (CBI) and various state police and forest departments. Officials seized 54,352 paintbrushes made out of mongoose hair and 113 kilograms of raw mongoose hair. Forty-three people were also arrested.

This was the 28th operation by the WCCB to curb the illegal trade in mongoose hair in the last two decades.

This illegal trade is a thriving multi-crore industry that results in the death of thousands of mongooses across India every month. The brushes are primarily used by artists looking for finesse in their work, thus resulting in the endangering of the species for the sake of finer brush strokes.

“For every kilogram of mongoose hair that is used in brushes, about 50 animals are killed. This is because only about 20 grams of good hair comes from every mongoose,” said H.V. Girisha, regional deputy director, WCCB, who was part of the operations.

He added, “We are doing our best to disrupt the supply and production network but unfortunately awareness about this wildlife crime is low and as long as there is a demand, there will be people killing mongoose for their hair.”

In 2019, 54, 352 brushes and 113 kgs of raw mongoose hair was recovered with 49 people arrested. Centres in Uttar Pradesh, Kerala, Karnataka, Maharashtra, Rajasthan and Tamil Nadu were targeted and a total of 27 raids were made.

Victims of crime and ignorance

As the Indian government, administrators and conservationists take pride in the progress made towards conservation of flagship species such as the tiger, the Asiatic elephant and the rhinoceros, many other animals such as the mongoose get overlooked, especially when they are not considered to be endangered.

“In recent years, we made a decision to look at the illegal trade of animals which are not really in the spotlight. The illegal trade in pangolin scales and monitor lizards in the last few years and now the mongoose are being exposed because of this,” said Girisha.

Pangolins are the most trafficked animals in the world for their scales, with India being a significant source country for these endangered animals. Meanwhile, illegal trade in monitor lizards is for their two-headed penises that are chopped off and sold as a mythical root herb, the hatha jodi, which is supposed to have ‘protective’ powers.

Girisha added, “We have been tracking the mongoose hair trade since the early 2000s but have stepped up our efforts in recent times. We believe the constant pressure we have applied and our raids and seizures in the last few years has dissuaded many from the business.”

Estimated 100,000 mongoose killed for their hair each year in India

The mongoose is found in different habitats across the country and often hunted by traditional hunting communities like Narikuruvas in Tamil Nadu, Hakki Pakki in Karnataka, Gonds in Andhra and Karnataka, Gulias, Seperas and Nath in central and northern India, all of whom are main suppliers of the animal’s raw hair into the business.

Six different species of mongoose are found across the country, including the Indian grey, small Indian, ruddy, crab-eating, stripe-necked and brown mongoose. The Indian grey mongoose is the most commonly found species and also the most hunted. Most of the brushes are produced in the town of Sherkot in Uttar Pradesh, which, like the town of Meerut is for cricket bats, is the ‘brush producing capital’ of India.

While most of the raids and seizures in relation to mongoose hair have been focused on this town, officials have also intercepted supply chains in various states, including Rajasthan, Kerala, Karnataka, Maharashtra, Tamil Nadu, Uttarakhand, West Bengal and of course, Uttar Pradesh. 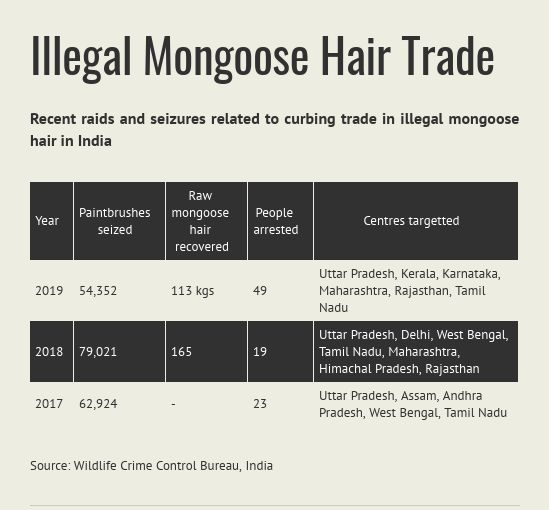 It is widely believed by wildlife crime experts that this illegal trade on mongoose hair is having severe consequences on the animal’s population. “We won’t notice its disappearance because who really looks at mongoose, but one day they would suddenly just not be there,” said Jose Louies, chief of the wildlife crime control division at the Wildlife Trust of India (WTI). Louies has been tracking and assisting government officials curb this illegal trade for the last decade.

He added, “When I have spoken to informants and people who are involved in this business, they say it has been going on for many decades now. It is easy for the hunters of mongoose to catch them, consume the meat and then sell their hair for profit. Also, this is a highly profitable trade, brushes made of mongoose hair costs five times more than other brushes.”

It is estimated that by the time one kilogram of pure mongoose hair is sold to the final buyer, it might be worth as much as Rs. 100,000. “We believe that at least 150 kilograms are produced every month, so this means up to 100,000 mongoose might be killed every year for their hair.”

The mongoose is listed under schedule 2, part 2 of India’s Wildlife (Protection) Act, 1972 and their hunting, possession, transportation and trade is an offence, and punishable with imprisonment for up to seven years. They are also protected by the Convention on International Trade in Endangered Species of Wild Fauna and Flora (CITES). Despite these stringent laws, illegal trade in mongoose continues.

“The reason many artists use these brushes is because in water colour, you can’t really afford to make any mistakes, therefore the brush needs to be extremely good. Many artists feel the mongoose hair brushes can hold a stroke well and they are also extremely durable,” said C.P. Krishnapriya, a Chennai-based artist who graduated from the Government College of Fine Arts, Chennai.

“Having said that, I do see many artists who have moved away from using those brushes. Lots of new artists are producing works for which no paints or canvas is required even, so they of course don’t need to buy these brushes. The availability of such brushes, at least in Chennai, has also reduced,” she added.

Maksud Ali Mondal, a 26-year-old artist based in Santiniketan told Mongabay-India, “I know for a fact that these brushes are still available here and that many artists use it. I personally think it’s a big issue and have stopped using any products that harm other animals, but many artists have sadly not done the same. They don’t seem to be concerned where it is coming from or how it was made, only that it is giving them the result that they like. This is highly problematic.”

The WCCB is now trying to reduce the demand for these brushes and also provide alternative sources of livelihood for people from indigenous communities who are involved in this business. “The next stage now is to spread awareness and deter users, be it artists, schools or anyone else from purchasing such brushes,” said Tilotama Varma, Additional Director, WCCB. “We are also trying to wean the traditional communities from this trade and rehabilitate them. This is a long process but I think we have made a good start.”