Sankar and his community dig canals to save Muthupet’s mangroves

Sankar grew up listening to stories of rain. For in Muthupet, where the 54-year-old’s family has been residing for about 250 years, it was the rainfall which nourished an extensive mangrove forest. Over the last 20 years, however, as the rainfall pattern changed, so did the biodiversity of the area.

Muthupet or Muthupettai, located in Thiruvarur district in Tamil Nadu, used to receive copious amounts of rainfall stretched across seven months. This resulted in the inflow of freshwater into the mangrove forests through fishing canals. Mangroves are salt-tolerant species and they depend on a delicate balance of fresh and seawater. In the last two decades, as the quantity of fresh water flowing into these canals dwindled, owing to scarce rainfall; the salinity levels in the region increased.

As the salinity levels rose, some mangrove species with greater sensitivity to soil salinity began to die out. This in turn affected communities that depended on the mangroves for their livelihood – communities that included Sankar’s family.

“I have heard from my father and grandfather how we used to receive heavy rainfall three times a year between July and September. They would use the Tamil proverb matham mummarri pozhigiradhu to describe it,” says Sankar, who goes by one name. The proverb literally translates to three months of heavy rainfall as “matham” means month, “mum” is three, “marri” is rain and “pozhigiradhu” refers to pouring copiously.

This was corroborated by V. Selvam, former lead researcher on mangroves at the M.S. Swaminathan Research Foundation (MSSRF), Chennai. “I used to live in that region while doing my Ph.D. from 1983 to 1986 and have witnessed the monsoon setting in around July 15 every year,” he says.

Selvam, who has also worked closely with Sankar on mangrove conservation programmes, says that in the last few decades, about five low-salt tolerant mangrove species became locally extinct because of the increase in soil salinity.

A study published in 2013 by Rajarshi Das Gupta and Rajib Shaw from Graduate School of Global Environmental Studies, Kyoto University, Japan, on Cumulative Impacts of Human Interventions and Climate Change on Mangrove Ecosystems of South and Southeast Asia also highlighted the connection between the loss of species biodiversity and livelihood.

It stated, “Potential consequences of the loss of mangroves in this region are multifaceted with distinct ecological, social, and economic dimensions. In many remote coastal areas of this region, mangrove-based livelihood opportunities strongly define the social and economical well-being of the coastal communities.”

“Over the years, mangroves have sustained more than 70 direct human activities. Of these, on-shore fishing and timber and firewood collection are worth mentioning in the backdrop of South and Southeast Asia, where rural poverty still forms a critical sociopolitical issue. The degradation of mangroves has adversely impacted traditional fishing activities. Many aquatic species including the commercially important fishes were lost or significantly reduced along with the mangroves,” the study found.

It is precisely the reason why conservation of mangrove diversity is important and this is where Sankar steps in.

Driven by a sense of urgency to protect the ecosystem which has been a source of livelihood for his family and community for generations, Sankar began to seek out organisations and agencies that could help him understand the science behind the importance of mangroves. In 1997, the then 30-year-old enlisted help from MSSRF.

“I knew how marine animals make the roots of the mangroves their home and how they are also sometimes used as breeding areas, but after my association with scientists and researchers, I got to know how mangroves help in maintaining an ecological balance among the sea, the land and the rivers,” says Sankar, a fisherman. 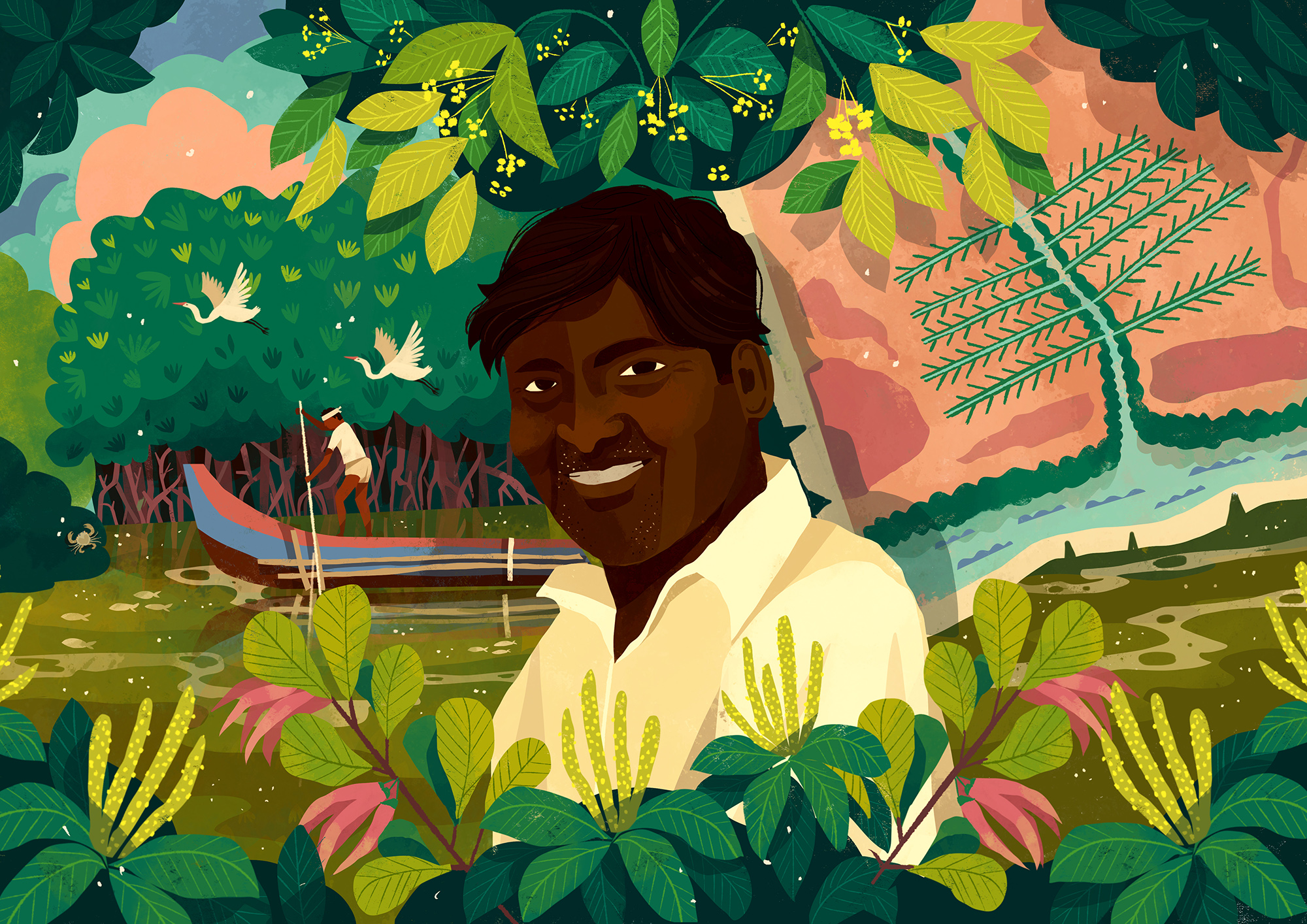 Over the past 20 years, 54-year-old Sankar, along with Muthupet’s coastal community and forest department, has dug canals to enable freshwater flow into the mangroves and planted mangrove saplings. Illustration by Chaaya Prabhat.

There were 200 traditional fishing canals in Muthupet, but on realising the importance of the inflow of fresh water to keep the soil salinity in control, Sankar began to mobilise his community to dig more canals — with the help of the Tamil Nadu Forest Department — leading the Cauvery river water into the wetland.

Over 20 years, Sankar worked closely with researchers to educate the coastal community on the importance of mangrove forests to their livelihood and, with the Forest Department, to dig over 3,000 canals spread across 5,000 hectares. These canals are also his legacy.

“I have been involved with a lot of programmes to spread awareness among coastal communities in the neighbouring regions and in conservation activities, but I consider my contribution in digging the canals to be my most important work. They are my legacy. Even when I am gone, the canals will continue to keep the salinity levels low, preserve the mangroves and in turn, protect my people,” Sankar says.

But, with scarce and erratic rainfall patterns, and an ongoing tug of war between the states of Karnataka and Tamil Nadu for Cauvery water, the hope for restoring the diversity of the mangrove forests are slim. Selvam says, “Unless more river water is released into the sea, the soil salinity levels are unlikely to get better. It is this fresh water that flows into the sea through the canals while feeding the mangroves. But since the State receives erratic rainfall and has often faced drought, the government is keen on saving the water for citizens, especially farmers.”

Most government authorities consider letting the river water flow into the sea waste and as a result, they try to ensure that very little is allowed to be “wasted”, the researcher adds.

Sankar, however, is optimistic. “When I was little, when the monsoon would set it, we would have a big festival and worship Paampatti Siddhar (a sage with an affinity towards snakes). We believe that he protects us from snakes when we venture out to catch fish. Now, even though the rains set in around November, we have maintained the tradition and continue to celebrate the festival on July 15. It has become a way to keep us connected to our past,” he says.

He knows that unless there is an increase in fresh water flow to the wetland, certain mangrove species will continue to die out, but he is determined to put up a fight. “We cannot change rainfall patterns but we will do what we can to save this ecosystem — from planting new mangrove saplings to protecting the existing ones. It has given us food and shelter for more than 200 hundred years. The least that we can do is at least try to conserve it,” he says.

Illustration by Chaaya Prabhat, a graphic designer and illustrator. She lives and works in Chennai and works on picture books, editorial and all sorts of illustration work.