India wants its thermal power plants to use domestic coal

The Indian government wants to ramp up the country’s coal production and consumption. In line with this goal, the union environment ministry has now made it easier for thermal power plants to change the source of coal from imported to domestic – a procedure that so far involved seeking an amendment in the environment clearance that such plants already had.

In an order on November 11, the Prakash Javadekar-led Ministry of Environment, Forest and Climate Change (MoEFCC) noted that “in order to simplify the procedure for change in coal source and encourage thermal power plants to use domestic coal” it has decided that “all the thermal power plants (including captive power plants) having environment clearance can change the coal source from imported to domestic, domestic to domestic and domestic to imported) including lignite.” The ministry said that this change can be done directly through “e-auctions, short term linkage/long term linkage/other linkage options of the ministry of coal or any organisation recognised for allotting coal linkages without seeking the amendment in EC.”

As per the environment impact assessment notification 2006, prior environment clearance (EC) is mandatory for projects like thermal power plants, mines etc. At present, when an EC is granted to thermal power plants, it is based on a “specific coal source such as specific coal mine (domestic coal), or imported coal or blend of imported coal and domestic coal.” And whenever there is a case of change of fuel source, an amendment in EC is required as per the norms.

The environment ministry said it has been receiving several proposals regarding the change in coal source, change in domestic coal due to change in fuel linkages/auctions, and switching from imported coal to domestic coal. The MoEFCC explained that this process sometimes could take 3 months to one year resulting in project proponents approaching them for “granting amendment in EC each time there is change in coal source.”

The MoEFCC’s decision is in line with the central government’s recent policy announcements and decisions that are aimed at increasing the country’s coal production.

In April 2020, the union power ministry also encouraged all the power generating companies using imported coal (part or full) to switch over to domestic coal to the extent possible. It had set up a mechanism to deal with difficulties faced by the power companies in obtaining required quantity and quality of domestic coal including logistic bottlenecks. The process of approaching MoEFCC’s expert panels, processing the recommendation of those panels and the subsequent granting an amendment to the EC again takes 2-3 months.

Thus, in order to “simplify the procedure for change in coal source and encourage thermal power plants to use domestic coal,” the ministry said it took this decision.

“All the thermal power plants (including captive power plants) having environment clearance can change the coal source (from imported to domestic, domestic to domestic and domestic to imported) including lignite, directly through e-auctions, short term linkage/long term linkage/other linkage options of ministry of coal or any organisation recognised for allotting coal linkages without seeking the amendment in EC,” said the MoEFCC’s November 11 order.

This transition aimed at becoming less dependent on coal imports doesn’t bode well for the communities living in and around areas where coal is mined, transported from or those where thermal power plants are installed as they suffer from its ill effects. The impact on the environment including high levels of pollution in coal-rich areas like Korba and Singrauli is an example of what could happen to areas that witness this transition.

Read more: India’s mining sector: Present is tense and future could be imperfect

The ministry explained in the latest order that various environmental impacts due to change in coal source, increase in ash quantity and its management, increased emissions and impacts of transportation have already been addressed and adequate mitigation measures have been stipulated by their various orders over the last five years.

However, the claim is disputed by environmental experts who note that the environment ministry has failed in both controlling emissions from thermal power plants and ensuring full utilisation of fly ash generated from them. With an increase in usage of domestic coal – which has high ash content and results in more pollution due to its poor quality – both the problems are only going to increase and become problematic for the local environment and communities. 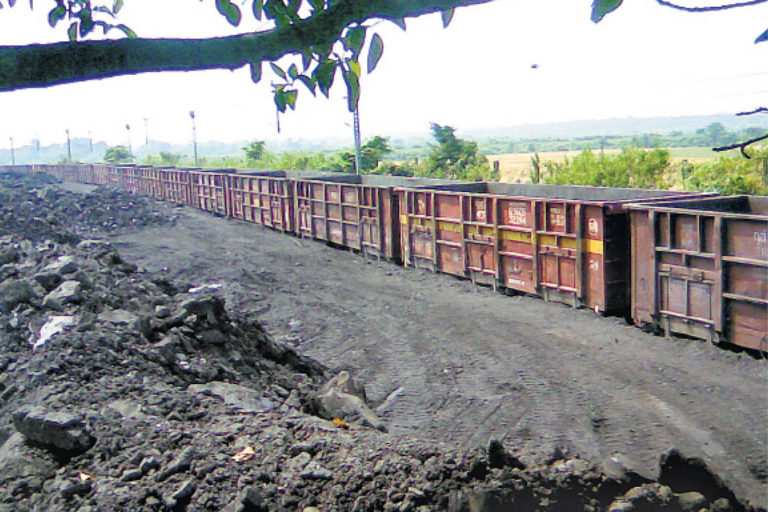 Ministry has also relaxed rules for transporting coal through trucks until railway sidings are developed. Photo by Shivsh0336/Wikimedia Commons.

In fact, over the last one year, several cases have been recorded where ash ponds were breached killing several people and severely polluting land and water.

Nandikesh Sivalingam, who is the Director of the Center for Research on Energy and Clean Air (CREA), a think-tank working on clean energy issues, said, while the ministry claims that various environmental impacts have already been addressed and mitigation measures have been stipulated by the ministry, in reality, what they continue to do is to dilute their own mitigation measures.

“The recent dilution of NOx standards from 300 to 450 is one among many dilutions that they have already done or proposed to do in the future, i.e, the claim of ‘already been addressed’ and ‘mitigation measures have been stipulated’ is just on paper and not in reality,” Sivalingam told Mongabay-India.

Read more: [Video] Is mining in India ‘just’ for the environment and communities?

The MoEFCC office order clarifies that the permission to not seek the amendment in the EC will be “subject to” certain conditions.

For instance, details regarding “change in source (location of the source, proposed quantity, distance from the power plant and mode of transportation), quality (ash, sulphur, moisture content and calorific value) shall be informed to the ministry and its concerned regional office.” The order said that the quantity of coal transported from each source along with the mode of transportation shall be submitted as part of the EC compliance report.

On emissions, the order said that “applicable flue gas emissions standards for particulate matter, sulphur dioxide, oxides of nitrogen and mercury shall be complied in line” with the MoEFCC’s 2015 order which mandated strict emission norms for thermal power plants by December 2017. However, the implementation of that order is yet to be achieved as thermal power plants have received an extension till 2022 to adopt the norms. Also, the progress of implementation and its compliance shall be submitted as part of the compliance report.

“Even after giving a five-year extension over the already agreed two-year deadline for the implementation of air pollution emissions and water consumption standards for coal power plants, the MoEFCC is unable to get most of the power plants in the country to comply with the deadline but is happy to amend to rules for the very same non-complying industries to relax the requirement for change in coal source,” Sivalingam rued.

Environmental lawyer Rahul Choudhary also said that when domestic coal will be used it will lead to more pollution from thermal power plants as India’s coal quality is poor.

“Now, when the ministry has failed for years to ensure compliance of their own order related to regulating pollution from thermal power plants, how will they ensure when thermal power plants will just need to inform them about coal content. Who will ensure that they don’t end up increasing the pollution load?” Choudhary said.

The November 11 environment ministry order also stresses on ash content in the coal and coal transportation. It noted that as far as possible, “coal transportation shall be done by rail/conveyor or other eco-friendly modes” but said, “road transportation is allowed with tarpaulin-covered trucks till the railway conveyor belt infrastructure is made available.” The order said a progress report (physical and financial) of rail connectivity from nearest railway siding or conveyor connectivity to the power plant shall be submitted to them in the EC compliance report.

On the issue of fly ash, the MoEFCC said the project proponents may approach them “seeking permission to use an emergency ash pond with cogent reasons, if any.” The ministry specified that “details regarding monthly generation, utilisation and disposal of flyash including bottom ash shall be submitted” to them at regular intervals.

Choudhary explained that “an increase in use of Indian coal will lead to more ash content which is another order that the environment ministry has repeatedly failed at.”

“When the ministry is allowing a change from imported to domestic coal, they are not asking to maintain the same ash and sulphate content in domestic coal. Moreover, tonnes of fly ash from thermal power plants is lying unutilised and adding to the pollution load of water bodies. This will only add to that problem. This order only eases the rules for the industry without ensuring any improvement for the environment or decrease in pollution,” said Choudhary.

Banner image: India has over 250 thermal power stations that are spread across the states. Photo by Jayadevp13/Wikimedia Commons.