Thirty-year-old Born Lang Blah from Mawphlang village has vivid memories of his childhood, when men, women, and children would walk downhill to Um Khlaw, the pond to collect water. The water was cool and clean, he said, and it would be used for drinking, cooking, and washing purposes. As years went by and the village grew, the pond began losing its significance. People began using piped water and the pond began gathering moss, and silt during the rains. It was a similar story in most other villages in the area until Tambor Lyngdoh stepped in and helped initiate a movement to revive these little village ponds in almost 70 villages of the Mawphlang sub-district in the northeastern state of Meghalaya.

Nature has ensured that all her elements are tightly intertwined, whereby one’s survival or death is dependent on the other. In the case of the “contaminated” water bodies in Mawphlang too, Lyngdoh said that it was their work on the conservation of the sacred groves and community forests that helped in the revival of water bodies.

“Contamination, in this case, does not mean garbage dumping,” Lyngdoh clarified at the onset. The local community in Meghalaya is known for its penchant for cleanliness — Mawlynnong in Meghalaya, a couple of hours from Mawphlang, holds the title of the Cleanest Village in Asia. “The problem was more to do with gathering of moss, dried leaves and twigs, and also, of clogging due to the gathering of silt,” he said. This would particularly worsen during the monsoons.

With piped water supply under the Public Health Department making its foray into villages, the usage of ponds lessened over time. Born Lang added that with the increasing size of villages, houses came closer to the ponds. “In my village, for example, there are more houses closer to the pond now, than earlier. The pond is downhill and the toilet wastewater, from the septic tanks, seeps into the ground. This also discouraged people from using the pond water,” he said.

Sixteen percent of The East Khasi Hills district, where Mawphlang is located, is covered by wetlands. The most important physiological feature here is the Shillong plateau interspersed with river valley, falling sharply in the southern portion forming deep gorges and ravine.

Awareness—or the lack of it—is the first and the most crucial step in addressing an issue. And in this case, Lyngdoh acknowledged that most of the community members raised the issue of revival of the local water bodies when he, as the secretary of the Mawphlang Hima, approached them about their most pressing problem. Hima is the system of the traditional polity of the local community of Meghalaya, a system of governance by traditional heads. Lyngdoh was the secretary of such a Hima from 1996 to 2011. He then went on to form Synjuk, a non-governmental initiative that implemented the Khasi Hills Community REDD+ project, a UN project for forest conservation and sustainable management, that aimed to protect sacred groves and watersheds and replant degraded land. It was India’s first community-based REDD+ project.

“From the year 2013 on, we received enough funds through carbon sales. So we sent a circular to the all villages to come up with a plan of activities, a village development plan, as per their most pressing need. Most of them opted for drinking water sources,” he said. India is one of the countries which has credits for emitting less carbon. Carbon trading is a market-based system to reduce greenhouse emissions contributing towards global warming, particularly carbon dioxide. Countries and companies that earn carbon credits by cutting down their emissions, can earn money by selling those credits.

In Mawphlang, Lyngdoh said that this was achieved mainly through Assisted Natural Regeneration, which is human protection and preservation of natural tree seedlings in forested areas. In other words, the community was involved in the afforestation process. “Between 2013 to 2019-20, we have sold 280,000 tons of carbon at 5 USD-9 USD per ton,” he said, “We still have unsold stick of 66,000 tons.”

These funds helped initiate a community movement of planting trees near the water bodies, cleaning them at regular intervals and spreading awareness about refraining from fishing during the breeding season. Care was taken that only local species of trees, like Castanopsis indica, Myrica, and Ficus, were planted. 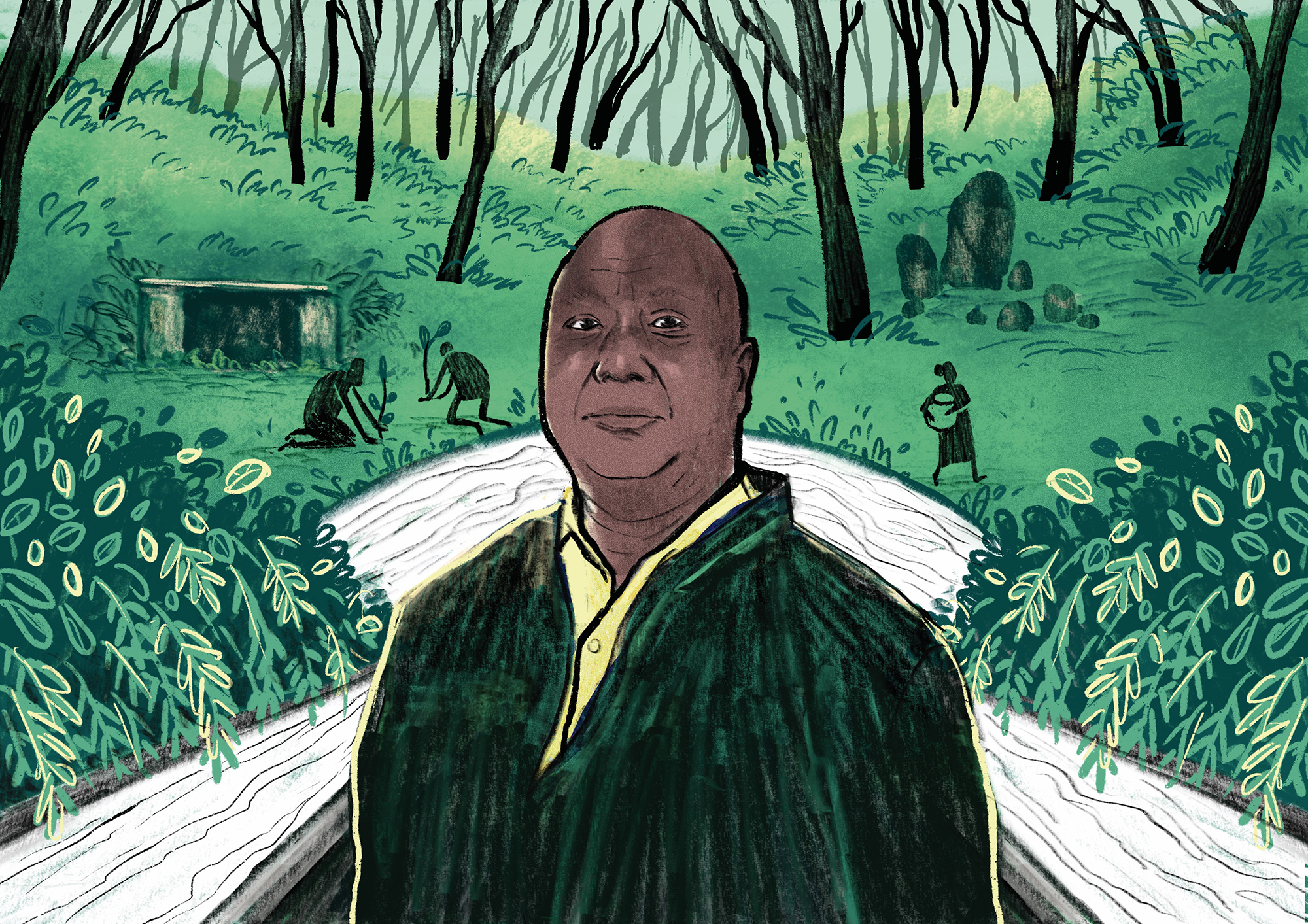 Tambor Lyngdoh, the secretary of Hima, a traditional system of governance in Meghalaya, helped in the revival of water bodies by conducting cleaning drives, tree plantations, awareness programmes, and protection of sacred groves. Illustration by Tarique Aziz for Mongabay.

Some of the effects of these actions were visible. “For example, the roots of the trees helped prevent erosion of soil, particularly during the heavy rains in the monsoons, thereby reducing clogging of the ponds,” Lyngdoh said. Some other effects, though not visible, still made a difference. Born Lang said that when the saplings took root and grew taller, the villagers felt it was safer to use the pond water, “because the roots were now aiding in filtration of the wastewater that seeped into the ground from the houses.”

“It was not a sudden change that was visible, but over time, people could see that the aquatic life began thriving once again in their local ponds,” Lyngdoh said. A variety of migratory birds were seen and with fishing being avoided during the breeding season, life returned in the ponds. “The water became cooler, cleaner, and once again, people have started going to the pond every morning to collect water for their household purposes.” This, he added, was of particular significance to people in the smaller, more interior villages where the piped water supply was sometimes erratic due to pump-breakdowns. The pond water was the source that they would then often turn to.

Partha J. Das of Aaranyak, a non-governmental organisation that works on conservation in northeast India, said that these effects simply reinstate the fact that “any watershed, like sacred forests, help in maintaining water bodies and wetlands”. “It is a natural process. If an area has a good forest cover, it regenerates and enriches water bodies. Trees reduce the rate of soil erosion, thereby lowering sedimentation of ponds, which is a big problem in northeast India,” Das told Mongabay India.

Like an interlinked chain, a thriving wetland helps in maintaining the socio-economic health of the rural community. “Not only is it (pond/wetland) a source of water, but also nourishes the community with food, like fish and, if there is, aquatic fauna which they can even sell,” he added.

All part of the same chain

Another source of water that local communities in Meghalaya would often go to are the ponds in the sacred groves or sacred forests of the state. A sacred grove is a forest where trees hold special significance culturally. In Meghalaya’s sacred groves not only are these trees forbidden from being cut, nothing from the sacred grove, “not even a twig” is allowed to be taken out from there. It is believed that if done otherwise, a terrible curse befalls the desecrator. “In Meghalaya, we have 215 such sacred forests which are protected by social fencing,” Lyngdoh said, “The Mawphlang sacred grove is 700 years old; it is therefore an ancient genetic pool.” Most of the sacred groves have a number of water bodies — Mawphlang has 20 ponds, said Lyngdoh — from where the local villagers can take water for drinking and cooking. “The rule is that the water from the sacred groves must not be sold or used for commercial purposes,” he said.

Not all sacred groves are, however, as thriving as the Mawphlang sacred grove. Forest fires during the dry season, soil erosion and other such factors, including “erosion of traditional values”, according to the Meghalaya Biodiversity Board, have resulted in degradation of some sacred groves. Working on this aspect, Lyngdoh helped in reviving six sacred groves near different villages where re-planting of local tree species was done, widening the periphery of the forest. For his work, such as the regeneration of 5,000 hectares of open forests, Lyngdoh was also awarded the NatWest Earth Hero Award this year.

Awareness about simple things — for example, animals would not come to destroy farmlands if they have enough to forage in the forests — helped the cause. Lyngdoh also believes that reinstating belief in the sanctity of nature, be it the sacred groves or the water bodies, further helps in conservation. “The water from the sacred groves, for example, flows downstream and nourishes the rice fields, and in turn, us. It is sacred,” he said. Nature, after all, is a panacea, but only if you let it thrive and heal itself.