by Manish Chandra Mishra and Aditi Tandon on 1 February 2021

In stories, in art, poetry and more, villages along rivers find a frequent mention. But far from the romanticism associated with life nadiya kinare (along the riverside), is Jagdish’s life of realities, in Jaitpur near the Chambal river, where he has lived for over four decades. In the Chambal region, which lies at the confluence of the states of Madhya Pradesh, Rajasthan and Uttar Pradesh, Jagdish grew up seeing the river getting destroyed by sand miners and poachers. The 44-year-old now raises his voice and is involved in conservation projects to protect the rich biodiversity of the Chambal region. From a school dropout to becoming a champion of conservation, Jagdish has come a long way.

Jaitpur village lies in Morena district, which falls in the part of Chambal near the Madhya Pradesh-Rajasthan border. Infamous for harbouring dacoits, the region is also known for its rich biodiversity, with more than 500 species of mammals, birds, fish and reptiles like gharial, jackal and monitor lizards. In the Chambal river in particular a variety of aquatic life has been observed over the years including the Ganges river dolphin (Platanista gangetica), gharial (Gavialis gangeticus), crocodile (Crocodylus palustris), seven species of freshwater turtles (Aspideretes gangeticus, Lissemys punctata, Chitra indica, Batagur kachuga, Kachuga dhongoka, Pangshura tentoria and Hardella thurjii), otter (Lutra perspicillata) and a variety of fishes.

Many villages that align with the Chambal river, including Jaitpur, host the migratory bird Indian skimmer (Rynchops albicollis). India is the only country that has a breeding population of the Indian skimmer. There are a handful of birds recorded in Pakistan, Myanmar and other countries but no present nesting records. Bangladesh has wintering records only.

The black and white bird with a unique orange-yellow bill recently went from vulnerable to the endangered category in the IUCN Red List, indicating a growing extinction risk to the bird. Researchers estimate an overall population of 2000-3000 Indian skimmers.

Nesting starts mid or end of March and continues till June. The bird nests on sandbars – a small area of sand usually in a river. The nests are threatened by predators such as jackals and wildcats but also face human-caused threats like sand mining as well as attacks by free-ranging dogs and cattle trampling.

Here is where Jagdish and his fellow villagers come in. Jagdish is part of a Nest Guardian project by the Bombay Natural History Society (BNHS), where he monitors the nests of the Indian skimmer and protects them from the looming threats.

Parveen Shaikh, a research biologist from Bombay Natural History Society and co-founder of the project, started working in the region in 2016. She realised through her work that the major threats for the survival of the species and other riverine birds were attacks by free-ranging dogs and cattle trampling on eggs. In this region particularly, there is low water level in the river. Because of this, the sandbars, small islands which the birds reside on, get connected to the land. This makes access easy for other animals like dogs and cattle which are threats to the ground-nesting bird, explains Shaikh. “Solving the core issue is going to be a long term thing and needs policy intervention. So till that time if we need to control the loss of the skimmers, we thought of trying a different method with the Nest Guardians project,” said Shaikh.

By involving some locals and providing them basic training as field assistants, the project started off small in 2019. The guardians go to the islands early morning when the temperature is low and note the number of nests or chicks and the overall status. They also stop cattle, dog, and jackals from coming onto the islands. “We have not asked them to stop natural predators like raptors,” she notes. The guardians are paid a basic amount for their efforts. With COVID-19 restrictions slowing down the project soon after it launched, Shaikh, who is now back in the field in Chambal, hopes to ramp up efforts this year.

“The project started on a very small scale but this year we hope to do it properly with control islands and see how efficient it is,” says Shaikh, adding that they don’t want to claim conservation measures without testing it, but overall observation is that nest protection or guardians has proved effective in many other species. 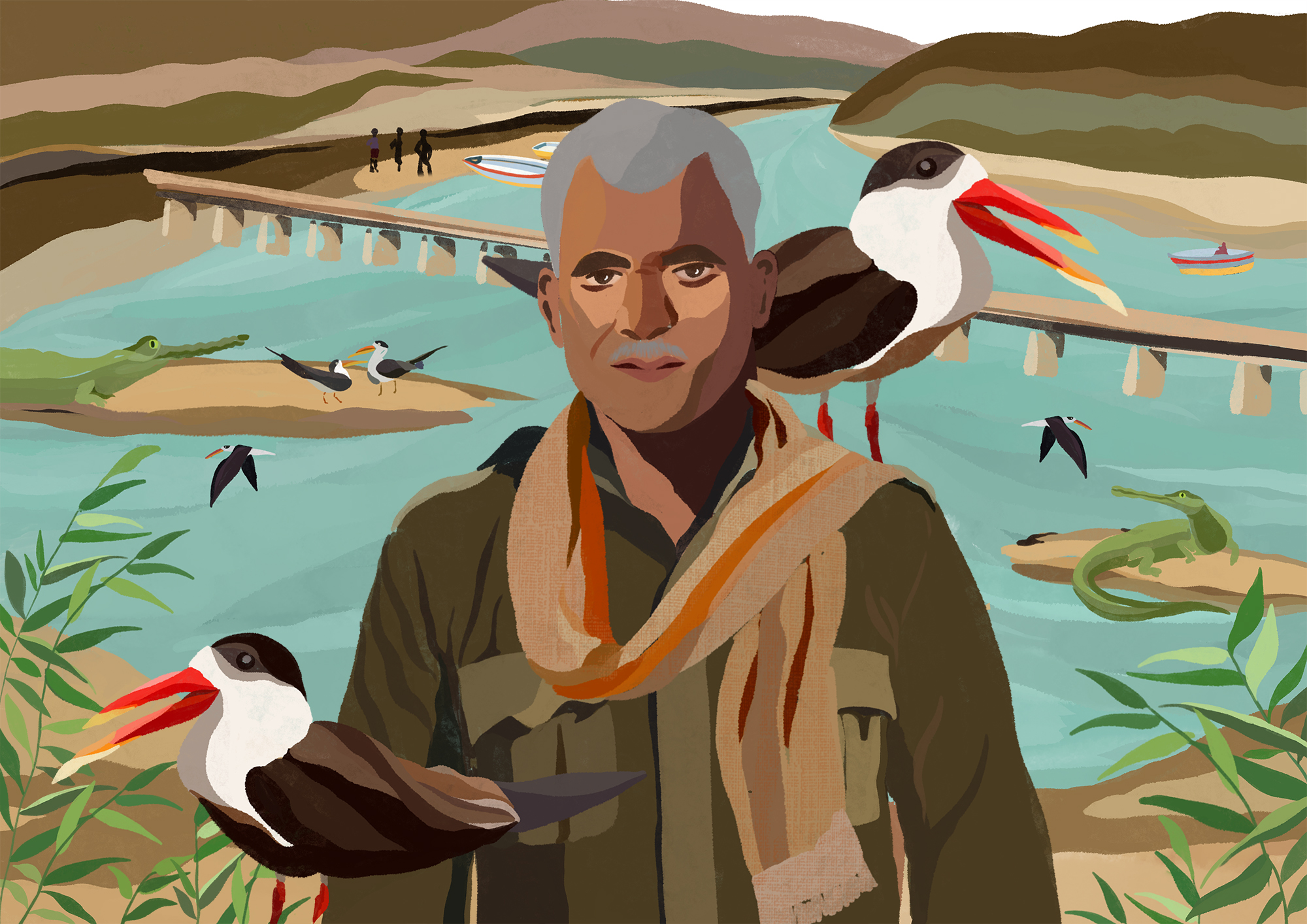 Jagdish is a guard turned conservationist of the Indian skimmer at its habitat, the Chambal River. The migratory bird nests on sandbars. To save the eggs and chicks of the bird, Jagdish with his small team of villagers, protect the sandbars day and night for two months. Illustration by Tanya Timble for Mongabay.

From a farmer to a chowkidar (guard) and now a conservationist, Jagdish’s journey has had several challenges. He had to leave school while he was in the 5th standard and, along with three other brothers, he started helping his father in farming. The river Chambal played a crucial role in bringing him close to nature.

“The river is an integral part of my life. I used to take a bath and swim in the river in my childhood. Even today, the whole village drinks Chambal’s water,” said Jagdish.

When farming was not enough to make ends meet, Jagdish took up a seasonal job as well. “We are four brothers, and the farms are not sufficient to run the family. I started working as a chowkidar in Chambal safari, run by the forest department. The job lasts only two to three months a year. The rest of the year, I indulge myself in various conservation work,” he added.

The help of the local people is important in this case because locals know the habitat, they know the region and the skimmer is a harmless species right in their backyard, notes Shaikh. “In the Chambal region where I work, there is no record of poaching of the eggs by people,” she says, indicating that a direct human threat to the birds is low. The project helps sensitise the local people and provides a small bit of employment, while the information collected by the guardians feeds into research and scientific data on the Indian skimmer, making it a useful technique “until we come up with the best solution to protect the species,” she says.

Illegal sand mining in Chambal is a cause for distress in Indian skimmers, gharials, and other species dependent on sandbars. The Supreme Court in 2016 had imposed a ban on sand mining in the Chambal River to protect flora and fauna in the region. After the complete ban, illegal mine operators, the ‘sand mafia’ became active in the region.

“Every year, the Chambal river deposits a large amount of sand, but the whole area is affected by sand mining. Not only migratory birds but the other species may lose habitat due to excessive mining. People involved in illegal mining can attack anyone, even the forest staff, so it is a big concern for us,” said Basavaraj S Annigeri, Chief Conservator of Forest (CCF), Gwalior, who overlooks the Chambal region.

“The Chambal forest area spreads over 420 square km, and it is very rich in biodiversity. Considering the large area, this is very challenging to keep a vigil on illegal activity. However, we are not reporting poaching of birds, but sand mining is still one of the biggest concerns of the department,” said Basavaraj S Annigeri.

Annigeri appreciates the work of Jagdish and said, “Including community in conservation is a great idea. Not only for Indian skimmers but for other species we deployed chowkidars in the area. The department will continue this practice in future,” he added.

Talking about the challenges, Jagdish said, “It is true that sand miners are all over this area, and they are dangerous as well. I encounter them almost every day. I used to request them not to disturb any island with a nest, and they listen to me most of the time. I also explain to them why these species are important to us. However, I can also understand their problem as there are not many sources of livelihood in this area.”

Through a fine balance of trying to do his work, while safely warding off sand miners, he has made inroads in atleast having a conversation with the mining mafia, something that is not easy for officials or researchers in the area.

Jagdish started biodiversity conservation work in 2009. Though he is a school dropout, he knows about many species and is involved in conservation work.“I can read and write Hindi and know basic maths. It helps me work with researchers,” added Jagdish.

Talking about his conservation journey, he said, “For the first time, I worked on the conservation of reptiles. I came to know that despite its size, gharials are not harmful to us. I spread this information to villagers that we need not fear these creatures. Now they are very supportive in conservation work.”

Lakhan Gurjar, Gabbar, and Chhotu, residents of the village, also help Jagdish in his work.

“Two months are crucial for Indian skimmers. We keep a vigil day and night on the nests. Protecting them at night is a little scary, but I always carry a torch with me. Fencing the nest area with natural materials is also part of our work,” said Lakhan Gurjar, another villager from Jaitpur.

“People in this region have worked with gharial nest monitoring before. They have been associated with sanctuary for a while. For birds they were doing it for the first time,” said Shaikh. “Our pilot has shown some level of success. While we can’t say with complete certainty that this is the best practice because the number of islands tested so far is low, it does give an indication but we need to go scientifically and get proper data.”

Shaikh emphasises that India still has hope for the species because there are breeding records in the country, even though a decline has been witnessed. India can take the responsibility of saving the species and the rivers of India are the only hope for it.

Illustration by Tanya Timble, a self-taught illustrator based out of Jaipur. Her art is deeply influenced by the rich cultures and traditions the city has to offer. It ranges in a spectrum from unmoving landscapes to trying to capture the ever-elusive human emotion.