When an army of women came together to revive a river

Vidhya Bhaskaran is back home in her village Salamanatham in Tamil Nadu from three days of training for the self-help group (SHG) members at Yercaud, a hill station in the state. The SHG in her village, that she is part of, is engaged in creating livelihood opportunities, like tailoring, cattle rearing and making agarbatti (incense sticks) and appala (papad), for women. In the last few years, Bhaskaran has got busier, becoming somewhat of a real-life influencer in her village. She is one among 1200 women in Vellore district in Tamil Nadu who played a stellar role in transforming their villages from arid, parched pieces of land to mosaics of green that are now water abundant.

Located upstream of the Naganadhi river that had dried up decades ago, every summer had the residents of Salamanatham village in Kaniyambadi block in Vellore district wondering what future held for them. Their lands and wells were getting drier, so were their hopes and dreams. Young men were leaving the village for city jobs realising there is little work for them in their villages. Vellore district has almost always found a place in Tamil Nadu state’s list of drought-hit villages in summer. After the Naganadhi, a tributary of Palar river with its catchment area in Vellore and Tiruvannamalai districts dried up, the groundwater in the area reduced, making the villages on its banks dependent on bore-well for water.

In 2014, a few volunteers from the Art of Living foundation approached the village with a novel idea of a recharge well. “We did not believe them initially when they said a recharge well will solve our water problems,” Vidhya says. The volunteers, under the leadership of Chandrasekharan Kuppan were convinced that creating recharge wells to capture the rainwater and to recharge groundwater will rejuvenate the Naganadhi and solve the water scarcity in these districts. They had the prior experience of rejuvenating the Kumudavathi and the Vedavathi rivers in the neighbouring Karnataka state. They had perfected the method. What they needed was the support of the villagers. With no villagers coming forward, they gathered volunteers from Chennai, bore the cost themselves and did a pilot project creating five recharge wells and three boulder checks in Salamanatham village. “In a month’s time, we were called back by the president who was glad that the open wells near the recharge wells were filling up. It was a huge success,” says 49-year-old Kuppan, the foundation’s youth leadership training programme mentor.

Kuppan took the idea and the data from the pilot project to the Vellore district administration and the rural development officers to convince them of the feasibility of the plan. The officers gave permission to implement the project and engage the villagers employed under the government programme, Mahatma Gandhi National Rural Employment Guarantee Act (MGNREGA) for this.

Vidhya, who was the worksite leader for MGNREGA works and her fellow villagers were amazed to see water in the open wells in their village. Vidhya quickly realised that this could be a game-changer in her village. She gathered 20 other women from her village and came forward to be part of the project to rejuvenate the Naganadhi. Says Vidhya, “Under MGNREGA, 100 days of work is guaranteed to one member of each family. My husband is a school teacher and my boys are employed. I took up the work.”  They were given 15 days of training in Chennai on every aspect of building recharge wells — from mixing soil and building cement rings that line the wells to curing and setting them, etc. Soon enough Vidhya, in her late 40s now, realised what awaited them was hard physical labour. “The wells were six feet in width, 15 feet in length and 20 feet in depth. We would work from morning 8 am to 3:30 pm on the cement rings to line the wells and work on recharge wells till 7 pm. We, women, did all the work. Four women had to go down the wells to dig them deeper. There was a lot of work but we made the work enjoyable by sharing amusing stories and singing Tamil film songs while at it,” Vidhya says. The work that started in late 2014 went on till 2017. These women made 36 recharge wells and many check dams.

Around the same time, similar works resumed at 20 other villages in the same block. All in all, says Chandrasekharan, 1200 people participated in creating 349 recharge wells and 207 boulder checks in these villages and 99 percent of workers were women. With work in the Vellore district completed, the work has now been extended to nine other districts (45 blocks) and not less than 20,000 women are participating in the rejuvenation of various rivers and lakes near their villages.

Santha Ashokan of Sathupalayam village in Vellore district says that she along with other women in the village has built 10 recharge wells and 10 check dams so far. “Only women work on recharge wells while check dams are built by both men and women. Some 100 villagers have taken part in this work,” says 47 years old Santha, a mother of three, whose husband works as a daily wage labourer. She says the hard-rock terrain made the work even more difficult. “We needed to dig very deep for the well. We had to lift the heavy cement rings and lower them down the well, all of which were done by women,” says Santha. 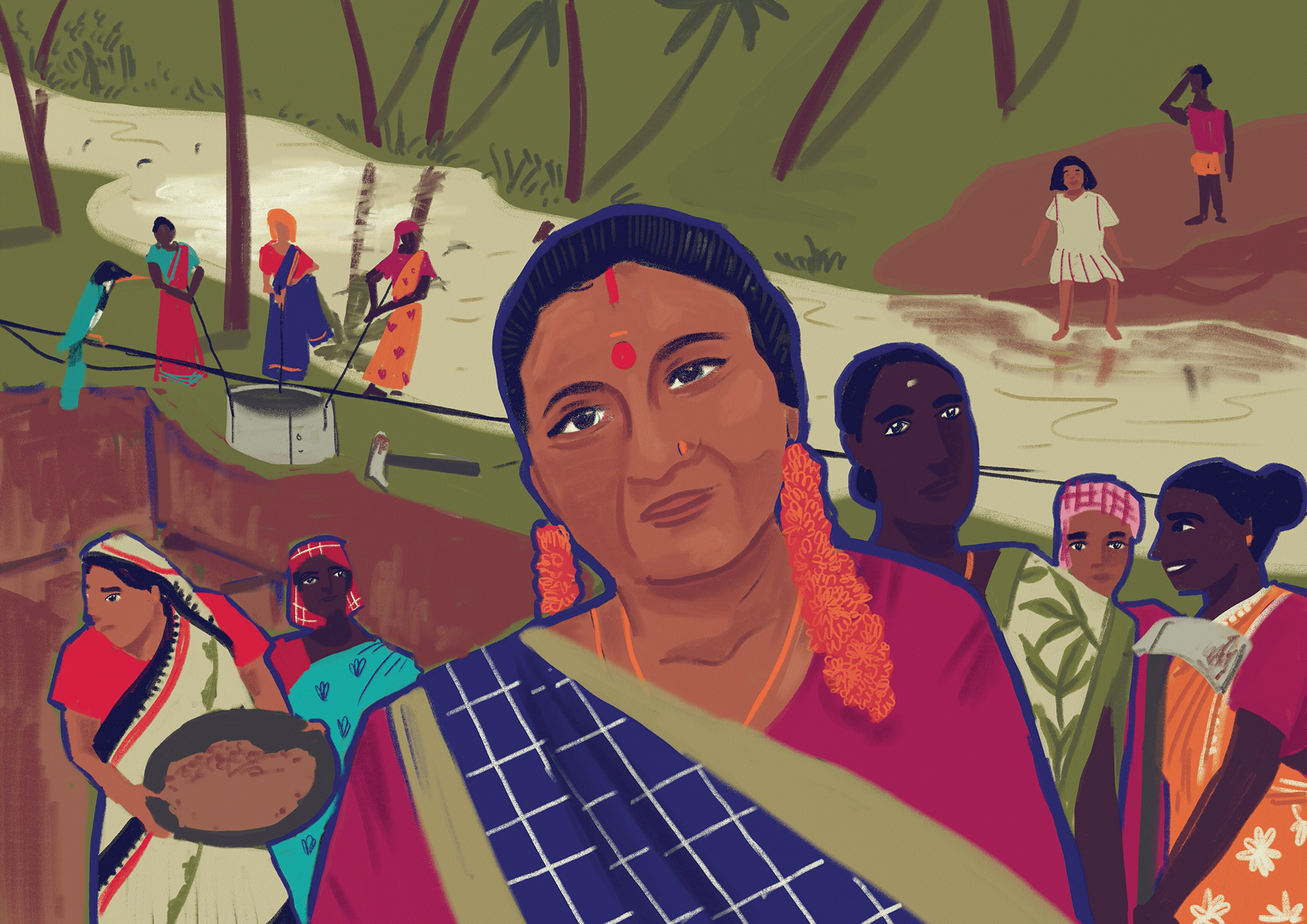 Vidhya Bhaskaran from Salamanatham village, Tamil Nadu, is a worksite leader for a government employment scheme, who mobilised women to join in reviving the dried Naganadhi river. The women of the village are part of an army of 20,000 women who built recharge wells and check dams to recharge groundwater which, in turn, revived the river. Illustration by Upasana Agarwal for Mongabay.

Explaining the process, former director of Karnataka State Remote Sensing and Application Centre, geologist Lingaraj Yale, who prepared the plan of action for the Naganadhi river rejuvenation project says the aim was to capture rainwater, avoid its wastage and use it to recharge the groundwater. Rainwater is caught along a network of streams by constructing boulder checks made from locally available hard rock. Big boulders are put in juxtaposition all along the streams every 300 metres. “Boulder checks serve many purposes. They reduce the speed of the running water which in turn helps in reducing soil erosion. When water flows slowly, the moisture of the soil, that supports the vegetation, increases. This vegetation, in turn, reduces soil erosion,” he says. Recharge wells are dug to 25 ft depth and the water is made to flow vertically down into them to recharge shallow aquifers. When shallow aquifers are recharged, it recharges open wells and the entire river basin gets filled up. The method also helps recharge deep aquifers further down the ground. Recharging groundwater helps maintain the environmental flow in the river. He says that if the rainwater is not conserved this way, the water will flow into the sea or evaporate. After the rejuvenation of the river, even a light shower helps the river to maintain its flow.

Despite the tiresome physical work it demands, the women are not complaining. In fact, Santha cannot wait for the Covid-related restrictions to lift so they could participate in some more work that’s left to be completed in her village. “Everyone gets paid the same for this work, whether one’s lifting cement rings or digging pits. For other work under MGNREGA, we are paid Rs. 100 a day. But for this, we get paid double – Rs 200 a day,” she says.

In Vidhya’s village, women also made cement rings for the wells and sold them to the government for profit. “We made cement rings by procuring raw materials ourselves. This gave us an additional income of Rs. 400 a day,” says Vidhya.

An inspiring tale of transformation

The Naganadhi river rejuvenation is a story of transformation, not just that of a river but the lives and livelihoods it sustains. Women like Vidhya and Santha feel empowered after successfully completing work that is traditionally considered unsuitable for women. They take pride in contributing to the development of their villages. Says a proud Vidhya, “This work has helped recharge every canal and well in the village. We have water even in summer now. Earlier we used to get muddy water from open wells but now the water is very clear. Our farmlands used to be dry and parched but now it’s all green everywhere.”

Kuppan says that with the recharging of groundwater, the moisture retention of soil has increased. “Even during the heavy rains in Tamil Nadu which resulted in floods in Chennai in 2015, these villages were safe because the waterbodies did not overflow. In the summer of 2016, our lakes were full because of the groundwater recharge,” he says. Farming is a prominent occupation here. According to Chandrasekharan, while only one crop was grown earlier by the farmers and that too only in monsoon, farmers are growing double the number of crops and throughout the year. Vidhya says, “We have 50 cents (half an acre) of land. While earlier we were not sure what to do there because of unpredictable rains and water situation, we are growing a lot of vegetables like chillies, cucumber, etc now and even selling them in market. During the season, I make a daily profit of Rs. 500 selling these vegetables. We also grow fodder for cattle.”

Moreover, women in these villages feel that their status in the family and the community has been elevated. They are respected as much as men, they say. And the fact that they are supplementing the income of the family and taking an active part in the upkeep of their homes and children makes them feel empowered and in charge. “The (Naganadhi) river has truly transformed our lives,” say Vidhya, Santha and a thousand other formidable women of Vellore.

Illustration by Upasana Agarwal, an illustrator based out of Kolkata. When they’re not drawing they organise an LGBTQ art space in the city. Their work is largely influenced by the nostalgia and history of urban landscapes and the fabric of life that ties them together.