It was a cold December day in Kanger Valley National Park in Chhattisgarh, India, and Zeeshan Mirza was not happy. He was on a faunal survey for the state government, and the herpetologist in him was on high alert. A large gecko, about 100 mm long, was known to live among the boulders of the teak and sal forests of the area, but it had been eluding him. He knew the geckos had to be there — he had seen museum samples and heard enough anecdotal accounts. One night, on a whim, he stepped into the storeroom of the guest house he was staying in, and there they were — a bunch of large lizards of the Hemidactylus genus, probably seeking refuge from the cold.

Mirza, a herpetologist at the National Centre for Biological Sciences (NCBS), named the species Hemidactylus kangerensis after the national park he found it in. Similar events played out during the discovery of at least three other species: researchers went looking for large-bodied geckos based on anecdotal data, and new species revealed themselves in the outskirts of Bengaluru, the southern Western Ghats, and the Eastern Ghats.

Around the same time as Mirza’s description of H. kangerensis, another group of researchers described a new species from the Mahendragiri hill ranges of the Eastern Ghats, which lie in the boundary between Odisha and Andhra Pradesh. Varad Giri and collaborators have called this new species H. sushilduttai, in honour of Sushil Kumar Dutta, a pioneering herpetologist from Utkal University in Odisha who has worked extensively in the Mahendragiri region, and Eastern Ghats as a whole.

Hemidactylus is a large genus of tropical geckos, with about 124 species globally. India is home to at least 30 described species (and counting). After the first few species descriptions during the early part of the twentieth century, 10 new species have been added over just the last decade. Four of these new species are large-bodied, about 100 mm long (excluding the tail) and live in rocky habitats, occasionally foraying into houses or climbing up a tree. They come in hues of brown and grey with intricate patterns, can change colour quickly, and have ornate scales and small spiky protrusions called tubercles on their back.

All four were initially considered to be Hemidactylus maculatus, and have now been rechristened as new species after careful investigation. They are H. graniticolous, H. acanthopholis, H. kangerensis and H. sushilduttai.

“Most of these large sized Hemidactylus are habitat specific, chiefly associated with rocky outcrops. This niche is not utilised by any other nocturnal lizards to my knowledge, except for a few other medium-sized Hemidactylus species. Along with insects, these large bodied Hemidactylus are known to feed on other geckos, scorpions, large spiders and at times small snakes,” said Varad Giri, a herpetologist and postdoctoral fellow at the NCBS, offering insight into the natural history of this fascinating group.

Not one, but five large geckos

Researchers have now designated the large-bodied geckos found around Mumbai, described by French taxonomists Dumeril and Bibron in 1836, as the ‘true’ H. maculatus. A similar species from Sri Lanka, H. hunae, initially considered a subspecies of H. maculatus, was elevated to species level in a 2010 study. Since then, a flurry of taxonomic investigations has reorganised the Hemidactylus group in India. The advent of molecular tools in taxonomy — using the genetic fingerprint of different groups to decide how different or similar they are — have armed researchers with an additional, objective method for delimiting species boundaries.

“When you use different lines of evidence you are following an integrative approach to taxonomy, and this is the way forward if we really want to progress in this field,” said Salvador Carranza from the Institute of Evolutionary Biology, CSIC-Universitat Pompeu Fabra, who has worked on a global study describing the inter-relationships between different Hemidactylus species, including groups from India.

Ecological and behavioural differences can also be considered to delineate species, Carranza added. “Among all the lines of evidence, molecular data is the most powerful and reliable one. I, therefore, consider a new species description using molecular and morphological data to be better supported and more informative than a new species description using only morphological data.”

Members of the H. maculatus complex, when put side by side can look identical to the untrained eye, illustrating the need for a multi-pronged approach. One of the newly described large geckos from this complex, H. graniticolus, looks very similar to H. hunae from Sri Lanka. “H. graniticolus has very different tubercles from H. maculatus and a different colour pattern,” said Ishan Agarwal from Villanova University, who was part of the team that described H. graniticolus as a new species. “It is, however, very similar to H. hunae from Sri Lanka and it is very difficult to tell them apart.”

Genetic analysis, of course, showed that the two species were very different from one another – they have been living in different countries after all. H. graniticolus is at least 110 mm long, strictly rock dwelling, found abundantly in rocky outcrops in the outskirts of Bengaluru on the Mysore plateau where scrub forests dominate. It was also genetically differentiated from its sister species within India, and Agarwal and colleagues named it a new species — ‘graniticolus’, after the granitic rocky boulders that shape its home.

H. hunae and H. graniticolus also hid between them an old puzzle, which Mirza unearthed when he visited the Natural History Museum in London to study specimens collected during India’s colonial past. Among the formalin doused old specimens, he spotted a new species: H. acanthopholis, collected in 1938. The species continues to live in the dry forests of Kalakkad Mundanthurai Tiger Reserve in Tamil Nadu, near Tirunelveli.

Unlike the other three new species descriptions, H. acanthopholis has been described using only morphological characters. Since it is an old museum specimen stored in formalin, it is impossible to extract DNA and corroborate results from morphological and molecular analyses.

“The use of morphology only to describe a new species is still a valid protocol and will remain so although some of my younger, molecularly oriented colleague would argue against this,” said George Zug, curator emeritus from the Smithsonian Institution, who has travelled in Myanmar collecting and describing Hemidactylus. “However, there are many new species hiding in museum collections for which there are no tissue/molecular samples, and these are periodically discovered by systematists. Should we not describe them? That would be silly and would be ignoring the full diversity of the group under study.”

The four new species described from the H. maculatus complex — H. graniticolous, H. acanthopholis, H. kangerensis and H. sushilduttai — are all large bodied, typically rock dwelling geckos, which superficially look very similar. Such species that have been hiding in plain sight are called cryptic species. With thorough explorations of India’s vast wilderness and robust analyses, many more new species are bound to come up.

The large size of these species is probably an ‘ancestral’ trait, feels Giri — this group descended from ancestors that were also large. “Changes in size also happen to avoid competition,” said Carranza. “It has been shown many times that lizards change size to avoid direct competition, and to exploit a different resource, like larger or smaller preys. Species have to fit in a complex ecosystem with many interactions and competition, and therefore size can be influenced by many factors, including predation (to escape from predators).”

All four species come in various hues of brown, with patterns. “Most of the Hemidactylus change their colour based on the place they live. Hence we see pale individuals in our house and same species has a different colour when in [a] natural setup,” said Giri. “I strongly feel that this colour change is mostly for crypsis or camouflage.” In other words, to blend into the background and escape predators. 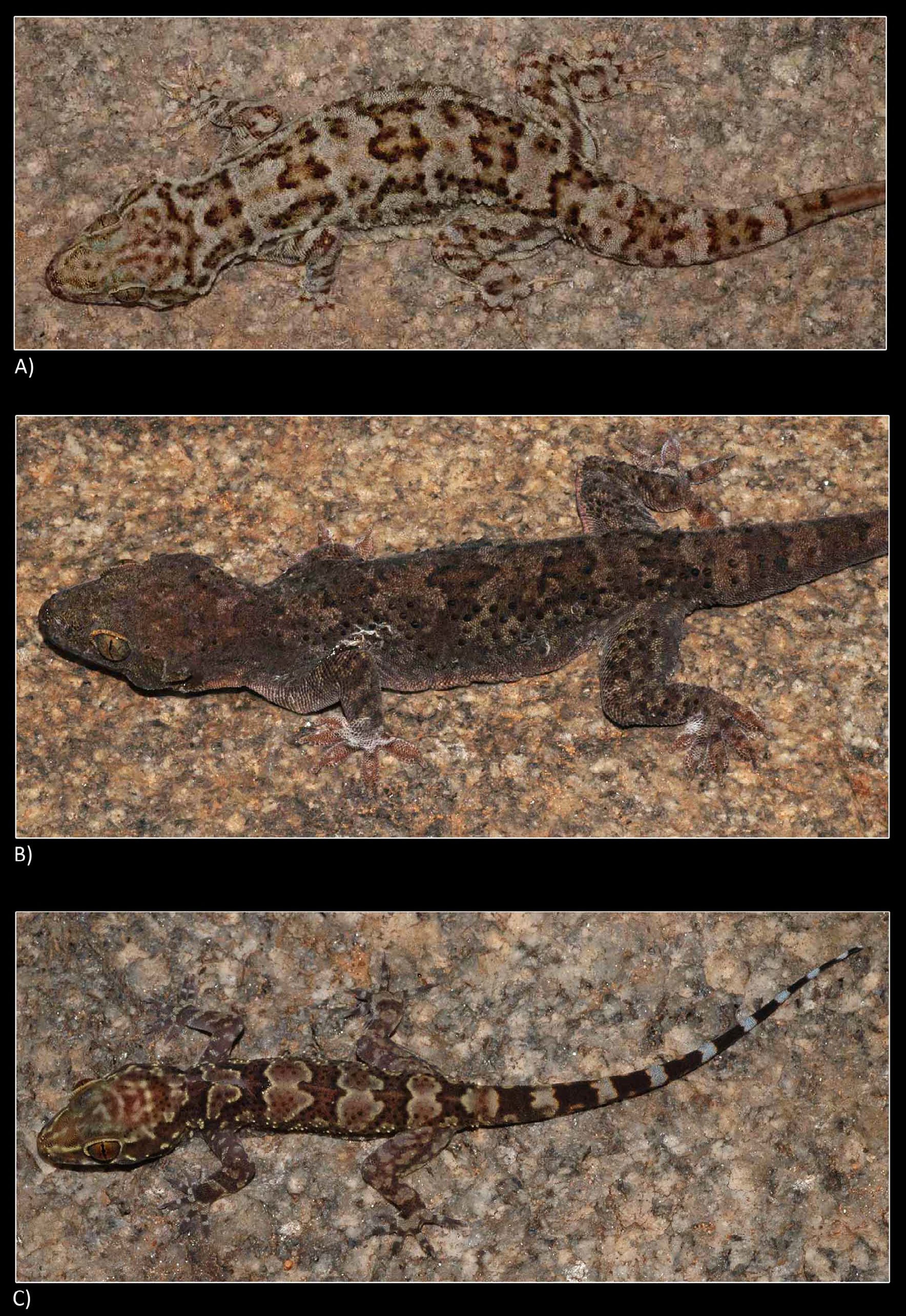 Another reason for the colour change is thermoregulation, says Carranza. “Many geckos adopt a dark colour to absorb more sun in the early hours of the morning to warm up quickly and reduce the time they’re exposed to predators. Once they have reached the required temperature for functioning they change colour and become lighter.”

The variation of colour even within an individual can be extreme, and it drives home the need to use multiple lines of evidence while describing new species.

Recent explorations in the Eastern Ghats have yielded three vertebrate species endemic to the Mahendragiri Hills alone: a geckoella Cyrtodactylus jeyporensis, a species of caecilian (a kind of amphibian), and H. sushilduttai.

“Mahendragiri, and the Malaygiri Hills of Odisha as a whole are an amalgam of species from the Himalayan foothills in the northeast and West Bengal, the Western Ghats, and the Deccan Plateau, with additional unique species of its own,” said Sushil Kumar Dutta, after whom H. sushilduttai is named.

“What we know about these areas is what the British documented,” said Dutta. “Officers stationed at Vishakapatnam used to climb on to elephants and make expeditions to Odisha, along the coast. Some were associated with missionaries and charities; along with their routine work, they did some herpetology.”

The areas of prime forest in Chhattisgarh are also rendered unsafe by Maoist insurgencies. Moreover, research has been focused on the Western Ghats because “Bengaluru is the hub for ecological research in India”, feels Dutta. “We don’t have many trained researchers who study the Eastern Ghats.”

The spate of new species descriptions from the Eastern Ghats has left Dutta optimistic. “It is only recently that youngsters have taken an interest and started exploring these areas,” he said. “I wouldn’t be surprised if we get more species from Mahendragiri.”

“Manpower is not a problem anymore; enough people are interested. With monetary and administrative support, we will be able to document the amazing biodiversity of these areas,” he added.

Correction: The size was first incorrectly mentioned as “about 100 cm”. Corrected it to 100 mm.