The Nipah virus (NiV) infection has claimed 14 lives, from Kozhikode and Malappuram districts of Kerala in the month of May. Siblings Mohammed Sadik (26) and Mohammed Salih (28), died on May 5 and May 18 respectively in Perambra of Kozhikode district. Following them their aunt Mariam (50) passed away on May 19. Lini who worked at the Taluk Hospital in Perambra, and had nursed Salih at the hospital died on May 21 due to the fever. That was the beginning of a panic outbreak in Kerala.

It was identified that there had been bats in the dug well, which was the main source of drinking water for the Sadik-Salih family in Perambra.  This created a huge fear among the public that people even called for mass culling of bats.

However, the disease itself was contained quickly before it could become an outbreak. On May 24, the Health Ministry, Government of India issued a media release stating that a multi-disciplinary team that was reviewing the situation from Kerala had concluded that “the Nipah virus disease is not a major outbreak and only a local occurrence.”

On May 25, there was news that added further confidence on the situation. Body fluid samples collected from the bats that were found hanging in the well in the Sadik-Salih household turned negative for Nipah virus. The National Institute of High Security Animal Diseases at Bhopal confirmed this after testing the samples. Further, samples sent from cattle and pigs in the vicinity that were also sent tested negative for Nipah virus.

Testing of cattle and pigs, along with the bats was important since the virus is known to transmit from bats to pigs to humans. Once infected, humans can infect others who come in contact with them.

Outbreaks of communicable diseases are not uncommon in Kerala. According to data collected by the Directorate of Health Services, Government of Kerala, in 2017 an estimated 3.5 million different fever cases, including dengue, chikungunya and leptospirosis were reported from Kerala, mostly during the monsoon months. From these, 76 deaths were reported. Since these huge numbers of fever cases is normal in the state, Nipah was not noticed until three people from one family died. 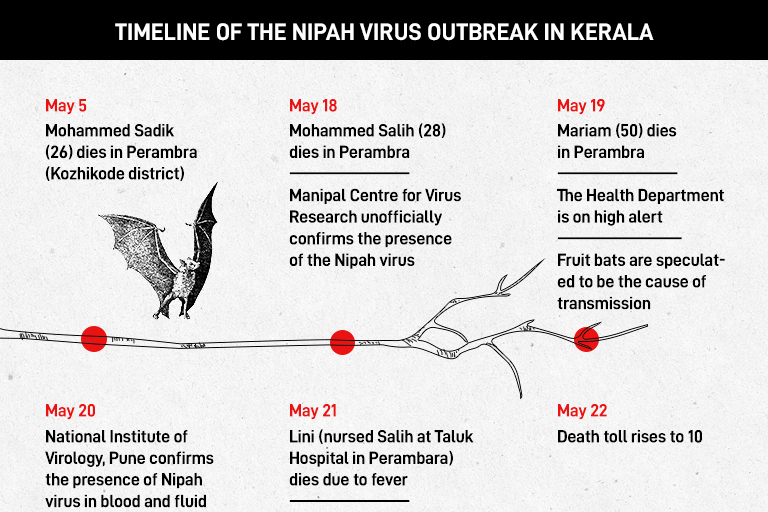 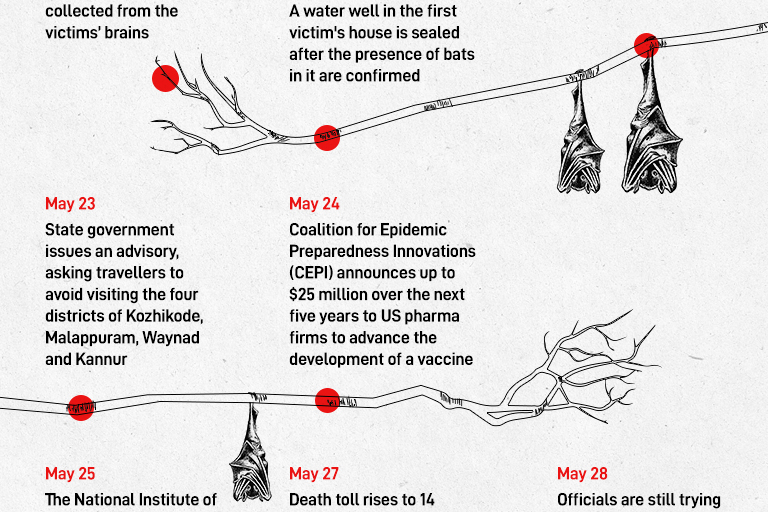 What is the Nipah virus (NiV) and its infection?

An RNA virus was first detected in Kampung Sungai Nipah, Malaysia, in 1998. Natural hosts of this virus are fruit bats and pigs are intermediate hosts. According to the World Health Organisation’s (WHO) Nipah Fact Sheet, the virus can be transmitted to humans from animals (bats, pigs), and can also be transmitted directly from human-to-human. In 2001 it appeared in Bangladesh and same year the Nipah virus outbreak happened in Siliguri in West Bengal in India. Of the 65 infected in Siliguri 45 persons died.

The disease can be identified through a polymerase chain reaction (RT-PCR) from the body fluids as well as antibody detection via the enzyme-linked immunosorbent assay (ELISA) test. “Human infections range from asymptomatic infection, acute respiratory infection (mild or severe) and fatal encephalitis,” states the WHO fact sheet. There are no specific drugs or vaccines for NiV infection. Intensive supportive care is the recommended treatment.

A relief but the whodunnit persists

There is relief in Kerala that the infection did not spread into an outbreak and is now more or less under control. However, from where did the infection start is the question that continues to be a mystery. Bat specialists were fairly sure that the bats hanging on the laterite walls of the dug well in the Sadik-Salih household were not the culprits.

“The bats hanging in the dug well were insect-eating ones, and insectivorous bats have not been seen to be the carriers of Nipah virus in the past,” said P. O. Nameer, professor and head, Centre for Wildlife Studies, College of Forestry of the Kerala Agricultural University.

“In my 20 years of experience studying bats in Kerala there has been no evidence of fruit-eating bats inside wells,” said Nameer. “The fruit eating bats roost on trees. The Pteropus fruit bats are the ones seen to be the most common carriers of the virus, which are the big fruit bats. What could be considered as a suspected carrier in Kerala is the great Indian fruit bat, also known as the Indian flying fox (Pteropus giganteus).”

As of the present it is not clear as to how, where and from whom the first infection happened in Perambra. Earlier reports stating that the brothers had visited Malaysia were found to be incorrect. Also, the authorities rebutted the possibility of one of them having got the infection from a nearby ecotourism destination since that is a popular place visited by many people.

Even while that mystery remains, the state government has been issuing advisories through print, television, radio and social media to take precautions to prevent contracting the infection. This includes steps such as not eating bird-eaten fruits, drink water after boiling and minimising contact with those infected. Isolation wards and protocols have been established at the medical college hospitals in the affected and nearby districts.

Bats have been blamed as the cause for Nipah as they are the natural host of the virus. It is due to this reason that the Kerala Government had to strictly warn public not to indulge in any activities that can harm the animal.

Merlin Tuttle, American ecologist, founder & executive director of Merlin Tuttle’s Bat Conservation told Mongabay-India in an email: “Virtually every animal species that has been carefully studied has some virus of potential risk to other species. In the past four decades, so-called ‘emerging diseases’ have killed fewer than 20,000 people worldwide, and there is no more than unsubstantiated speculation for blaming even half of those deaths on bats,” he added. He also reminded that some of the most valued crops rely heavily on flying foxes and their closest relatives for pollination. “Flying foxes are also Southeast Asia’s most important long-distance seed dispersers, essential to reforestation,” he stated.

He also said that bats in reality have one of the world’s finest safety records when it comes to living with people. Hundreds of bat biologists, millions of people who eat bats, and the millions more who share cities with huge bat colonies are no less healthy than others.

Nameer regretted that an unnecessary panic has spread among the people against bats. Bats have been living in close proximity to communities for ages. Most of the older open wells in the state, especially those that have been dug through laterite rock beds, commonly have bats hanging on the walls.

“It is neither possible, nor necessary to clean all these wells and remove bats,” he said. “In a crisis situation such as now we need to be careful and take precautionary measures. Let us boil water for drinking and cooking.”

Nameer consulted Paul Racey, a leading authority on bats, retired professor at the University of Aberdeen and the chair of the Bat Specialist Group of the International Union for Conservation of Nature (IUCN) over this issue. In an email to Nameer, Racey said that the disease spreads mainly by drinking palm sap that has been infected with the Nipah virus by the greater Indian fruit bat Pteropus giganteus. Preventing bats’ access to the sap collection pots has reduced the infection rate in other parts of the world. “In Bangladesh, bamboo skirts have been deployed to prevent bats from contaminating palm sap.  Do people consume palm sap, either fresh or fermented, in Kerala? This is a possible route of infection,” Racey asked in his mail.

Since palm sap toddy is a common drink in Kerala, experts advise avoiding the drink at present. This is better way to prevent the infection from spreading than harming the fruit bats.

“Culling of bats has to be totally avoided even if tests show some of the fruit bats in the region are carrying Nipah virus,” Nameer emphasized. “Earlier experience from Malayasia has shown that the virus will get more virulent if the animal is stressed and this could cause more infections.”

The virus that is present in the bats get virulent when the mammals are stressed mostly out of human-induced factors. A WHO report on Nipah Virus Infection states that “there is strong evidence that emergence of bat-related viral infections communicable to humans and animals has been attributed to the loss of natural habitats of bats.” It further adds, “As the flying fox habitat is destroyed by human activity the bats get stressed and hungry, their immune system gets weaker, their virus load goes up and a lot of virus spills out in their urine and saliva.”

According to Nameer, the bats can be stressed out due to various reasons, “It can be loss of habitat, lack of food, climate change or deforestation that can lead to the virus spilling out.”

“After the El Nino phenomenon in 1997, fires in Kalimantan and Sumatra destroyed approximately 5 millions hectares of forest. The haze badly affected the flowering and fruiting of trees in southern peninsular Malaysia. This loss of habitat and lack of food forced the fruit bats to migrate to orchard farms and that stress caused the spill out of virus,” B. Ekbal, neurosurgeon and a renowned public health activist in Kerala said.

These orchards to which the bats migrated were surrounded by number of pig farms. In Malaysia the virus was first transferred to pigs and later got transmitted to humans. More than a million pigs were culled to control the outbreak then, recalled Ekbal. The WHO report also says that 90 percent of the infected people in 1998-99 outbreak were pig farmers.

Both Nameer and Ekbal emphasize the need for better public health awareness and preparedness.

According to the WHO report, 600 Nipah cases were reported in the world from 1998 to 2015. Among this almost 50 percent of the infected patients died.

“This is a small number considering the world statistics for other diseases. In Kerala 10 people die daily in road accidents. So there is no need of a panic. This virus can be tackled with precautions,” Ekbal said. He also added that state should give more importance to public health as presently it is focusing more on curative medicines.