Agriculture has been the lifeline for millions of Indian farmers since the Green Revolution in the 1960s and groundwater has played a vital role in irrigating water-hungry crops such as rice to feed India’s ever-growing population.

But over the past three decades, India has been grappling with intense and rapid depletion of groundwater stores driven by human-caused climate change and over-extraction. The consequences can be far-reaching; water shortages can hit food supplies causing prices to soar and fueling social unrest, according to researchers.

Groundwater is the largest liquid source of freshwater which, along with soil moisture, surface waters such as lakes and rivers and snow and ice, comprises all the freshwater available on Earth.

Now, in a new first-of-its-kind global analysis on freshwater availability, northern and eastern India emerged as major hotspots of groundwater depletion mainly because of overexploitation for irrigation although eastern regions also faced low rainfall, while the central and southern regions showed stability owing to water policy changes and increased rainfall.

Amid rising temperatures and high greenhouse gas emissions, the study projects increasing rainfall over India by 2100. But past research suggests that the Indo-Gangetic Plains have been hit by more droughts due to climate change and better water management policies are urgently needed to tackle India’s groundwater woes.

“Groundwater in northern India is being depleted at a rate of 19.2 gigatons per year,” said Matthew Rodell, lead author of the paper and chief of the Hydrological Sciences Laboratory at NASA’s Goddard Space Flight Center. This is equivalent to almost a third of the capacity of one of India’s largest reservoirs by water capacity, the Indira Sagar in Madhya Pradesh. “That is definitely a concern, because it is unsustainable,” he warned.

While monsoonal rainfall contributes to groundwater recharge as water seeps through the soil collecting deep underground in the gaps between rocks and layers of porous rock, known as aquifers, pumping out stored water lowers the water table. Unlike rivers or lakes, recharge of groundwater can take years.

Nowhere is groundwater more important than in India where a quarter of the world’s groundwater is extracted annually—the highest in the world—which is greater than that pumped up by China and the United States combined. Up to 80 percent of the population relies on groundwater for both drinking and irrigation. Although agriculture comprises only 17 percent of India’s Gross Domestic Product, it employs more than half of the workforce.

Declining stores in the north and east, stability in the south and central regions

Rodell’s team mapped global trends in freshwater availability over a 14-year period from 2002 to 2016 based on data obtained from NASA’s Gravity Recovery and Climate Experiment (GRACE)—a pair of satellites launched in 2002.

Using information on precipitation, irrigation and groundwater pumping, the team analysed the reasons for the trends. In addition, they predicted changes in precipitation by 2100 under the IPCC (RCP8.5) “business as usual” scenario where greenhouse gas emissions continue to rise.

Despite receiving one percent higher than normal rainfall between 2003 and 2015, northern India experienced severe groundwater depletion primarily due to widespread overextraction for irrigation of crops like rice and wheat. The semi-arid northern region boasts the highest irrigated area (54 percent) among all 34 regions studied worldwide. While the study projects rainfall to increase by 12 percent by 2100, Rodell warned “it will be too little, too late.”

The eastern region also suffers from dwindling freshwater stores, due to groundwater extraction for agricultural irrigation and falling monsoonal precipitation. As this region has the third highest irrigated area (25 percent), the authors believe the falling trend is likely to continue. However, as rainfall is expected to spring back to normal levels and even forecast to rise by about 15 percent by 2100, the rate of groundwater decline is expected to be lower.

“More rainfall could mean more groundwater recharge and more water availability, but if that increasing rainfall is delivered in more severe storms, increased flooding may be a downside to greater precipitation,” noted James Famiglietti of NASA’s Jet Propulsion Laboratory, who is the co-author of the study.

Tushaar Shah, an economist and public policy specialist at the International Water Management Institute and former director at the Institute of Rural Management at Anand, Gujarat, agrees stating that if the predicted increase in rainfall “comes in fewer, more intense rainfall events, it will not be of much help in the more frequent dry spells.”

Central and southern India appear to be experiencing increasing freshwater stores, likely due to a naturally higher than normal rainfall.

“Although the trends in groundwater are confined to the northern part of India and into Bangladesh, it is really a national problem in the sense that, especially in northwestern India, that region grows food for the nation,” said Famiglietti.

In the states of Punjab and parts of Haryana in particular, extraction exceeds recharge from monsoonal rainfall, said Vimal Mishra who leads the Water and Climate Lab at the Indian Institute of Technology in Gandhinagar, Gujarat. “This is highly irreversible,” he said, because recharging groundwater levels back to normal in this region may take up to 50 years.

As groundwater systems are very slow in response, water stores recorded during 2002, for instance, may reflect rainfall changes going as far back as 10 to 15 years, explained Mishra. In 2017, his team reported another culprit contributing to plunging water tables: weaker monsoonal rainfall due to climate change. They noted a long-term decline in rainfall over parts of northern India since the 1950s such as in the Gangetic Plains, resulting in more frequent droughts. Rising sea surface temperatures in the Indian Ocean may be linked to this decline, they found.

This “has partially contributed to the decline in groundwater” due to lower recharge levels, he explained. And when monsoonal rainfall is lower, farmers rely more on groundwater, so extraction is higher, he stressed.

Indeed, “the situation would be worse with normal or low rainfall,” cautioned Rodell.

Shah and Mishra state that subsidised electricity provided by state governments is largely to blame for the over-extraction as farmers use it extensively to run pumps that draw up groundwater.

What’s clear is that averting what the authors state as a ‘tragedy of the commons’ will require a host of sustainable water management policies starting with abolishing or restricting subsidised electricity.

“Punjab is waking up to the crisis but not due to water shortage but the fiscal burden of the power subsidies,” said Shah. “It is politically hard to stop power subsidies,” he acknowledged, but “it is easier to improve quality of power and then ration daily hours along a reliable schedule.”

According to Mishra, the government should develop policies to determine which crops should be grown in which region according to the water availability, which “has not been the focus.” For instance, he said, Punjab has a semi-arid climate but it grows rice, which depletes groundwater and is “highly unsustainable.” “Ideally, rice is not the suitable crop there.” 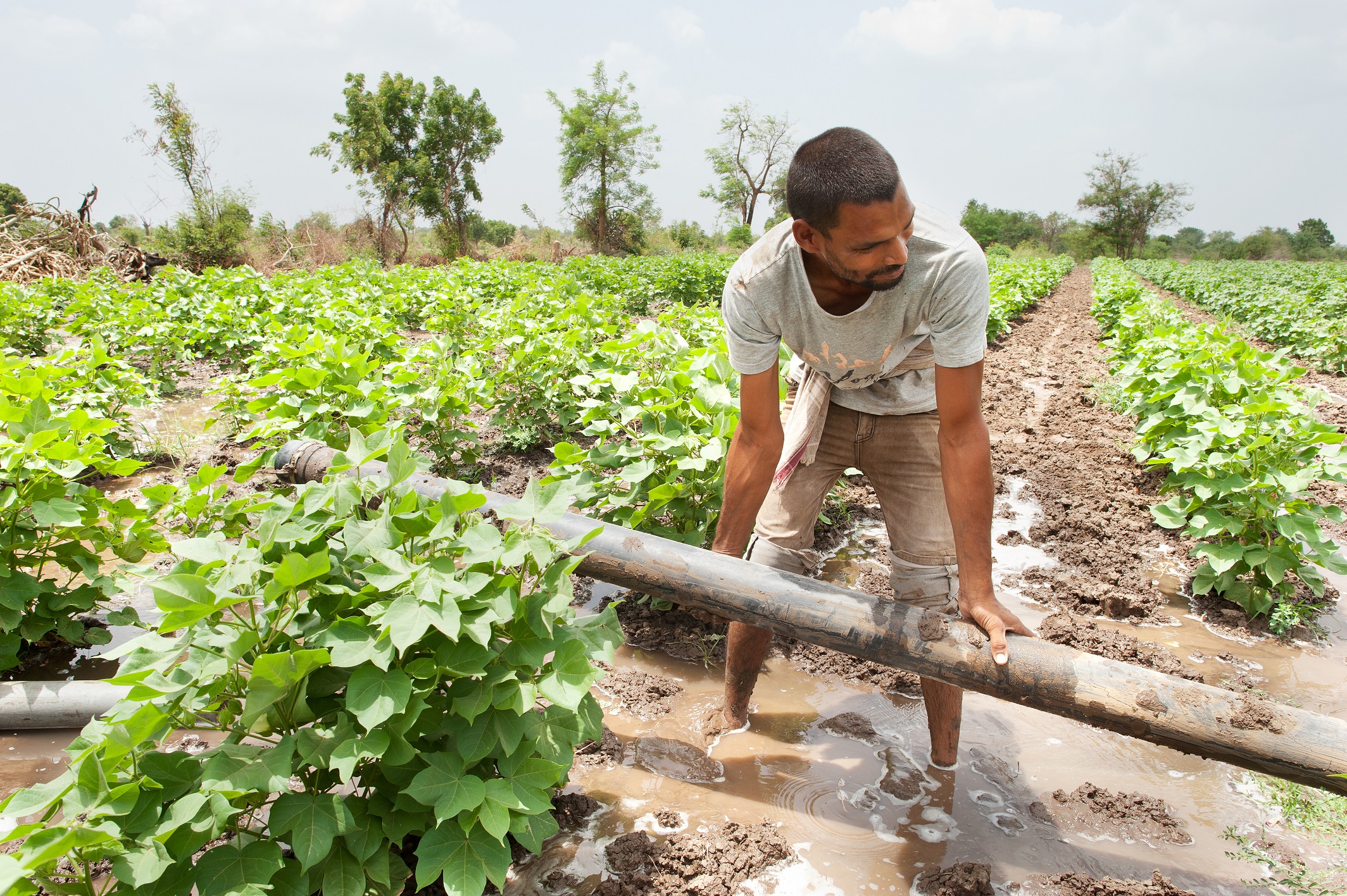 Also, “the irrigation efficiencies are extremely low,” said Mishra. “The crops do not need all of the water pumped; they just need a small fraction of the water. We end up losing a lot of this water.” He suggests improving “irrigation efficiency by using other types of irrigation that can save water” and “reduce the pressure on groundwater systems.”

“The traditional flood irrigation in India accounts for huge water loss through evapotranspiration,” said Soumendra Bhanja, a postdoctoral fellow at Athabasca University in Canada. “This system could be replaced by drip irrigation or spray irrigation,” he suggested.

Mishra proposes the decentralisation of groundwater recharge. “Right now, it is neglected; no one cares how much recharge is happening in their own farm or fields during monsoon season. There must be a policy that makes sure that every farmer participates in the groundwater recharge mechanism also,” he elaborated.

“Gujarat was the only state which worried about long-term groundwater sustainability; Maharashtra, Telangana, Rajasthan are increasing investments in recharge, but a great deal more needs to be done,” said Shah.

Aquifer replenishment in the west and south

But there is hope. A 2017 study found that groundwater management strategies likely contributed to a marked reversal from decreasing groundwater storage during 1996 to 2002 in Gujarat and Andhra Pradesh to replenishment from 2003 to 2014.

“In Andhra Pradesh,” said Bhanja, “two major projects were undertaken by the Netherlands’ government and the Food and Agriculture Organization of the United Nations” where farmers were trained in sustainable groundwater-use practices. He also noted “an increase in surface water irrigation over the years.”

However, Mishra believes that the replenishment seen in southern India is primarily driven by the long-term increases in monsoonal rainfall. This is because the study used data from the Central Ground Water Board, which, he said, focuses on shallow groundwater tables. “But most of the pumping for irrigation happens from deep wells,” he points out.

We don’t know how much water is stored in the aquifers, said Famiglietti. “Once you know how much is there, extraction rates can be adjusted to sustain groundwater storage over a longer period of time,” he elaborated.

“Managing aquifer storage will become increasingly critical for us in the face of climate change,” urged Shah. By increasing recharge and limiting withdrawals we need to “make sure that aquifers are at least half-full before a dry spell,” he asserted.

“As of now,” said Shah “our hard rock aquifers become bone-dry before a dry spell; so we have no drought resilience.”