Odisha’s coastal migrants return to where they started

Four years ago, when Minoti Naik of the coastal district of Bhadrak in Odisha, decided to send her 17-year-old son to the “city” for work, it was in hope that their lives would thereon be on the road to improvement. With a meagre land-holding and depreciating land productivity that, in addition to frequent floods and cyclones, had made agriculture increasingly unsustainable in her village, Minoti and her husband had pinned all their hope on their young son.

Only, life came a full circle. In March this year, as the lockdown was implemented in the country, to contain the spread of the novel coronavirus, 21-year-old Jaidev, like hundreds of thousands of other migrant workers, was left to fend for himself in Tamil Nadu where he was working as a plumber. Almost two months into the lockdown, not only had he exhausted all his money to survive, he also fell ill.

“He didn’t have enough to eat, nor the money to return home,” Minoti said in a stoic voice, “We had to loan Rs 10,000 from the self-help group I am a part of and send it to him. That’s how he could come back home.” Four years on, the Naik family — like many others — are, therefore, back to where they started: vulnerable, in debt, and staring at an unsure future.

There is no absolute number of people who migrate (seasonally and otherwise) from Odisha in search of employment. However, in the reverse-flow, around 600,000 (six lakh) migrant workers had registered with the state government portal to stay in institutional quarantine on their return when the lockdown was lifted on May 3. Media reports said that on June 8, the Chief Minister’s Office (CMO) informed that more than 500,000 (five lakh) migrant workers had returned home.

These figures are not absolute and like Minoti Naik said, there are many even in Sashu Bhuasuni, her village in the Chandbali block itself, who haven’t been able to come back home. “Fifty people, including my son, have come back. But there are many others who still haven’t,” Minoti told Mongabay-India, “My son spent two weeks in quarantine centre and then came home. It has been a horrible phase.”

Climate change forced them out

Almost every family in Shashu Bhusani village, where Minoti is from, has one or more members of the household who has migrated to a city thousands of kilometres away, for work. Some work as casual labourers in construction, some in mills and factories, others, like Jaidev, as plumbers. Some of the most common destinations are Bengaluru in Karnataka, Chennai in Tamil Nadu, Delhi, and a host of places in West Bengal, Andhra Pradesh, even Gujarat and Rajasthan.

It’s the same story in Sitalpur, another village in Bhadrak, where most households are women-led. Men, mostly in the age-group of 20-45 are missing because they had migrated, seasonally or otherwise, for work. Padmini Naik of Sitalpur, for instance, has been managing her home, tending to her two children and looking after aged mother-in-law, ever since her husband migrated to Delhi five years back and found work in a garment factory.

“The money we earned from agriculture was becoming meagre and unpredictable. When our second child was born, my husband decided that the only way we could have a good life was if he went out of the village in search of work,” she said.

A study on seasonal labour migration and migrant workers from Odisha by the Centre for Migration and Labor Solutions said that trends of migration in Odisha varies according to the region. “The percentage of household migration is higher in coastal (region), suggesting that a large number of households have one or more members migrating from the region,” the report said. The average number of migrants per panchayat was however higher in the western region.

A major reason for high rate of migration from Bhadrak, which is a coastal district, is the impact of climate change felt on agriculture. Padmini Naik’s husband, for example, was a farmer, who used to grow paddy on his one and half acre land. The productivity of the land, however, started waning over the years and he, like others, realised that the reason behind this was increasing land salinity.

In Arjunpur, another village, the effect is starkly visible — large swathes of agricultural land lie barren, with wild grass growing everywhere. Floods, say locals, have become more savage over the years. “We have always been familiar with floods. In fact the flood waters used to replenish the fields,” said a farmer, Lakhinder Rout of Arjunpur. “However, now the floods are unpredictable. When it rains, it rains so much that our standing crop is completely destroyed,” he said.

Adding to this, is the increase in the frequency of cyclones. Over the last one year, for example, Odisha and particularly its coastal districts like Bhadrak, has had three cyclones — Phani in May 2019, Bulbul in November 2019, and Amphan this May 2020.

“We have one-acre land on which my husband grows paddy. The productivity has lowered, we get about 13 quintals (1.3 tonnes) of rice (local variety),” Minoti said, “Post the paddy harvest, we had grown vegetables in the field. Everything was destroyed in (cyclone) Amphan.”

A study by Bishnupriya Saho and Prasad K Bhaskaran of the department of Ocean Engineering and Naval Architecture in IIT Kharagpur, noted that Odisha has suffered 46 cyclones in the past four decades, between 1970-2012. Suffering a constant blow of destruction and devastation, to lives and livelihood, and weary of rebuilding everything all over again, people have therefore chosen to move out in order to support their families.

Boloram Majhi, for instance, had decided to migrate outside his village, Neduali in Bhadrak, almost two decades ago, “when the problems had just started surfacing”. “I didn’t have enough land and that too had started turning saline. I would have still stayed back, but there were no jobs in the village,” Majhi told Mongabay-India.

His first destination was a cotton mill in Rajasthan, where he worked for a few years, before moving to Bengaluru where he worked as a casual labourer in construction. “My wife has been taking care of both our children and running the house all throughout. I just kept sending the money,” he said.

Then, one year ago, Majhi decided to come closer home, and took up work in Bhubaneswar, the capital of Odisha. “I would earn around Rs 14,000-15,000 per month, and after my own expenditures on food and rent, would send Rs 10,000 home. But ever since the lockdown, my earnings dried up,” he said.

COVID-19 forced them back home

“I have had no work and no earnings for the last three months,” Majhi went on to say, “Forget supporting my family, we had to take money on loan from someone else and they have started asking for it back.” They hardly have any savings and Majhi said that he has been fishing in the nearby river to sell the produce and sustain the family. 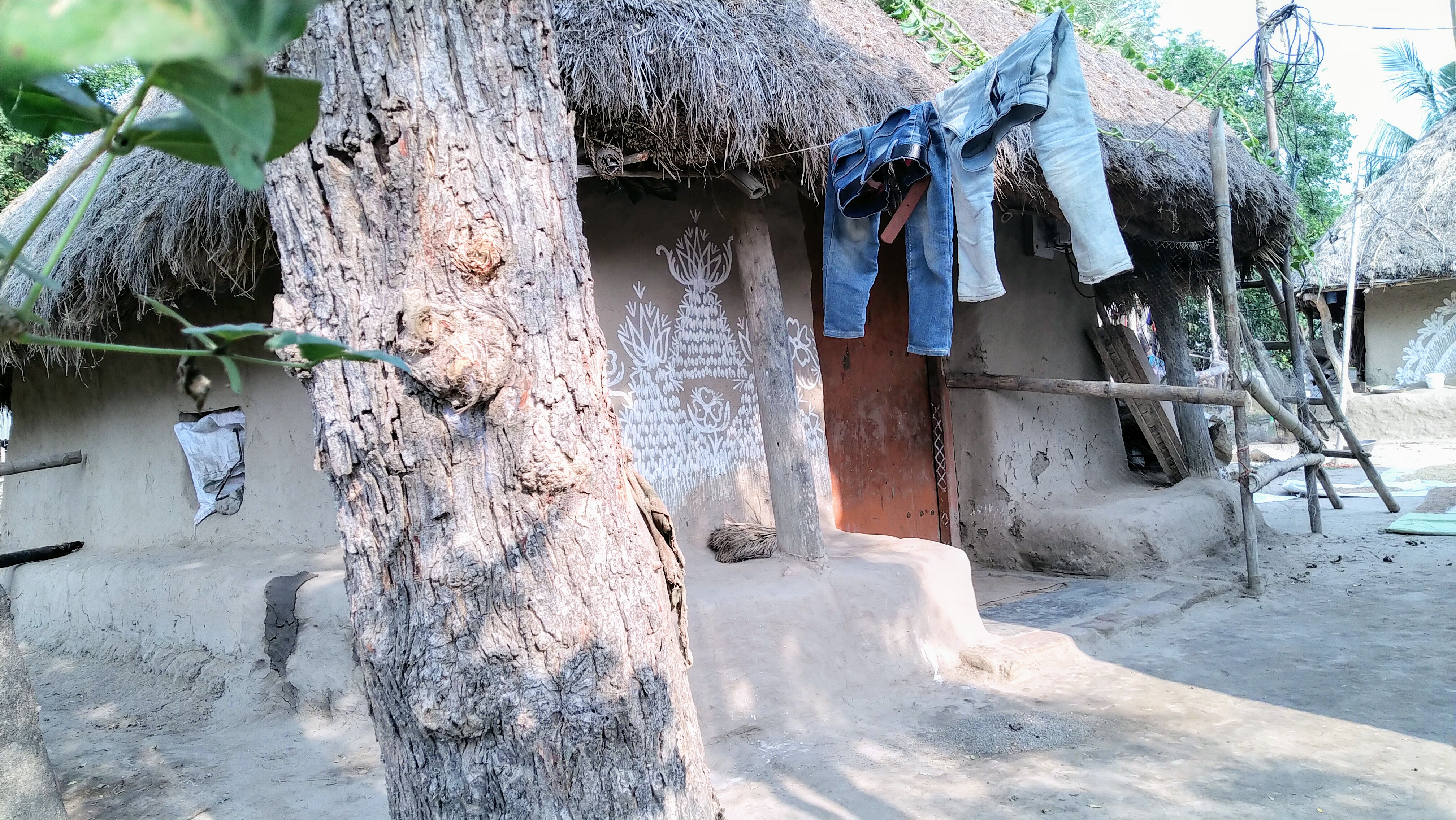 Almost everyone who has thus returned, now say that they don’t want to go back to the cities. “We are not sending Jaidev back,” Minoti said, “None of the boys in the village who have returned home from the big cities are keen on going back.” Lopamudra said the same. “My brothers are not even thinking of going back now,” she said, “We are grateful they could somehow come back.”

To return or not: emotion vs economics

It’s an emotional decision, but whether that would stand the test of time, particularly as they have become once again vulnerable, stuck in a debt trap and no assured source of a steady income, remains to be seen. Boloram Majhi, for instance, said, “I will return after the coronavirus (pandemic) goes away. This fishing will not sustain us. My children’s studies have to be taken care of and now we have debts to repay.”

Most families also say that they would prefer if their son, husband, or brother, were to find a job closer home, within the state, if they have to return. “My brothers will look for work within the village, maybe as agricultural labourers, and if that doesn’t work out, somewhere closer home,” Lopamudra said. Working on their own field is still not an option.  Minoti Naik said the same about her son. “We would prefer if he finds work within Odisha,” she said.

Debabrat Dash of a local NGO, Pragati Jubok Sangha, said that while the state government has taken initiatives to generate employment among the returnee migrant workers, it is doubtful if they would remain at home for long. “Under the employment guarantee scheme, for example, migrant workers whose job cards have been dormant will be turned active. Online registrations have already started. There will be job opportunities, for example, in nutritional garden and vermicomposting units,” Dash said,

“Having said that, the economical impact on these workers will still be huge. I am not sure how many would agree to the Rs 207 per day wage for eight hours of work on a vermicompost pit when they were earning much more outside.” Dash estimated another five-six months after which some would return to the cities.

The Economic Survey 2016-17, in the chapter, India on the Move and Churning: New Evidence, said that a new Cohort-based Migration Metric (CMM) showed that annually inter-state labour mobility averaged 5-6 million between 2001 and 2011, yielding an inter-state migration population of about 60 million.  It went on to add that the first-ever estimate of internal work-related migration using railway data for the period 2011-16 indicates an annual average flow of close to 9 million people between states. But this is still a conservative figure, considering people do not solely travel by train. Buses are another common medium of transport. Like the one, Lopamudra’s brothers took to return home.

“We know that more difficult days are coming upon us,” Minoti Naik said, “Schools will reopen and fee for my other two children have to be paid, and we will have to invest some money into preparing our field for paddy cultivation.” The family cannot cut down their ration further—they already have, since the last two months.  “I don’t know what the future holds. I don’t want to send my son so far away for work again, but we will see how everything goes.”

Read more: [Commentary] The environmental impacts of the economic package

Banner image: A representational image of a child and his father using a polluted pond in Keonjhar district, Odisha. Photo by Manish Kumar.