The Mandavi Creek in Vengurla had always been a place that drew wonder from Shweta Sachin Hule. She would gaze at the glistening waters under the clear blue skies and the dense mangroves that spread richly across the creek and tell her family and friends about how it was a shame that not many tourists knew about this area. But at a two-hour-drive away from the tourist-packed Calangute beach in Goa, the Mandavi creek and its neighbouring villages remained largely anonymous on the map. That was until 2017, when Shweta Hule, her husband, and a group of eight other women launched what has popularly come to be known as the ‘Swamini Mangrove Safari’ in Mandavi Creek, Vengurla on the coast of the western state of Maharashtra.

The group approached the Mangrove Cell of Maharashtra that was working with UNDP India on mainstreaming biodiversity in the region and presented the idea of a mangrove safari. They accepted the proposal and contributed towards securing two boats and life jackets for the SHG to run this programme.

Over the last three years, the group’s story has been the subject of several newspaper articles and a documentary, which have helped increase the mangrove safari’s popularity, attracting tourists from far and wide. The safari involves a ride on a row boat, about one and a half kilometre into the creek, accompanied by not more than two members from Swamini at a time. While one person rows the boat, the other acts as a guide, introducing the tourists to the mangroves and its uses. Apart from the mangroves, the Swamini members are also experts at identifying birds such as egrets, herons, storks, and cormorants among others. “The tourists are often amazed when we take them through the mangroves, helping them identify the different species of flora and fauna in the creek”, Shweta Hule told Mongabay-India. Smooth-coated otters, mudskippers, mangrove crabs, and birds including storks, herons, cormorants and egrets are some of the commonly found species in the area. In the last tourist season, which started in October, but was cut short by the pandemic-induced lockdown in March, the group had made close to Rs 2,00,000 from the mangrove safari activity alone.

“Back when I had this idea to run a mangrove safari, all I knew then was that I wanted to take tourists on a boat ride in this creek and show them all the beautiful birds that flock here. I didn’t know much about mangroves,” recalled Hule. Belonging to a fisher family, Hule would walk around the creek during low tide to collect wild mussels and oysters but had never ventured far inside the thick mangrove scrub and hence knew them all by just one name – kaandal, which is the generic local term for mangroves. However, within months, this had changed.

Shweta Hule and the other members of the Swamini Group were encouraged by the staff from the Mangrove Cell under the Maharashtra Forest Department and a small team who worked alongside the Cell on a UNDP project funded by the Global Environment Facility, to take up this activity as an alternative livelihood.  The project team helped them learn more about the mangroves so that they may in-turn raise awareness among the villagers and the tourists. In a matter of few months, the women members of the Swamini Group had not only learned how to row a boat for the first time in their lives, but they had also learnt to identify the eight species of mangroves that grew in the creek, by their local and scientific names. Every other day, after finishing off their household chores in the morning, they would walk by the creek and try to recollect the names of the mangrove species as they had been taught by the UNDP-GEF Project staff. 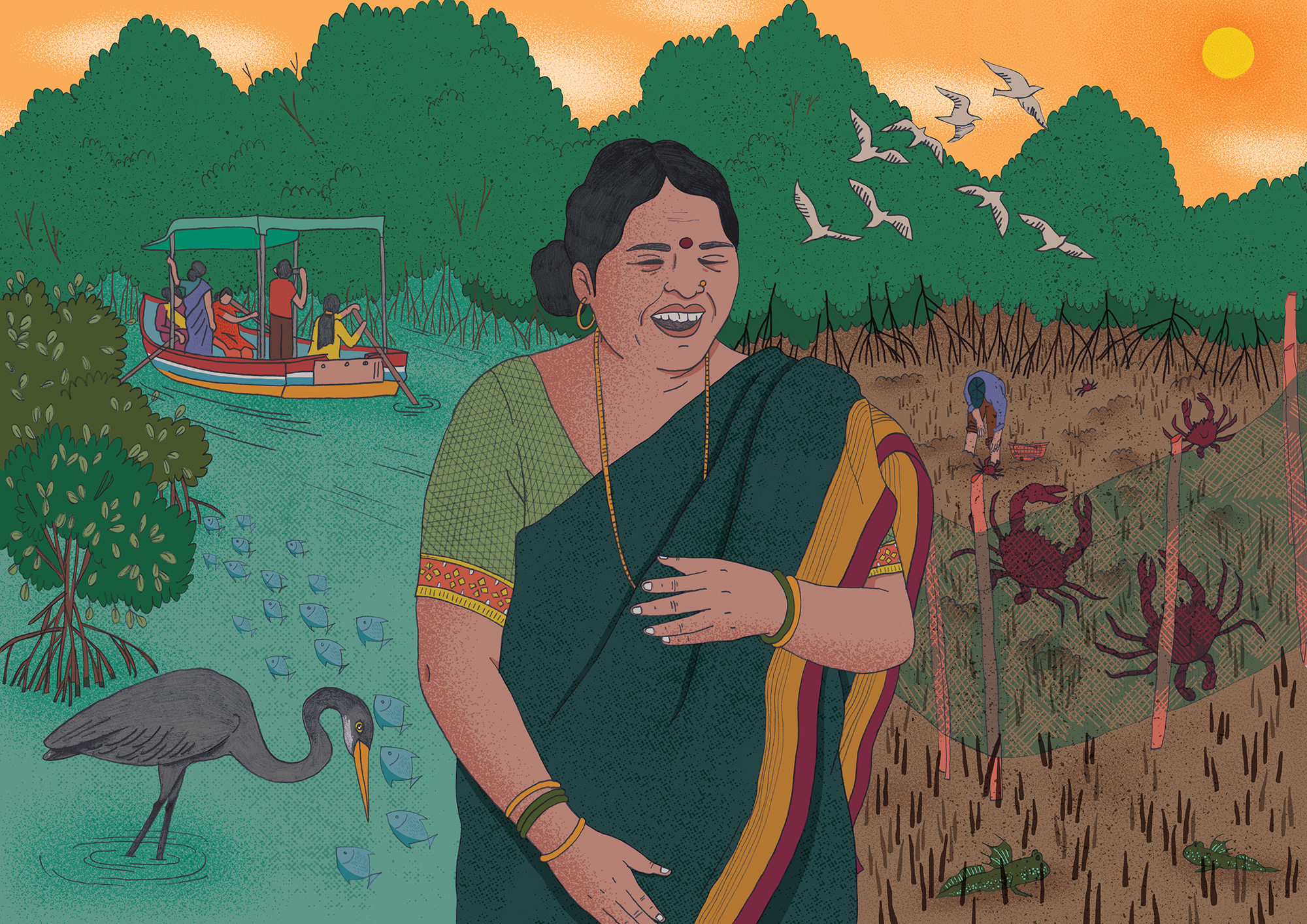 Shweta Hule leads the ‘Swamini’ self-help group, a group of ten individuals. They are involved in mangrove tours and other income-generating activities in Sindhudurg’s Mandavi creek. The sustainable livelihoods have enabled conservation of the rich wetland. Illustration by Pearl D’Souza.

With a total of 320 sq km spread across the coastal belt of the state, Maharashtra has the fifth largest mangrove cover among Indian states, as per the State of Forest Report, 2019. Although the Sindhudurg district occupies only 12.19 sq km of that expanse, it is one of the richest in terms of biodiversity, and also houses the only recorded case of the Sundari tree (Heritiera littoralis) in Maharashtra.

Maharashtra is also one of the only states that has a dedicated cell for mangrove conservation in the country. The Mangrove Cell of Maharashtra Forest Department, set up in 2012, has witnessed an increase of 134 sq km in the mangrove cover since its inception (from 186 sq km in 2011 to 320 in 2019, accounting for over 38 percent of the total increase in cover in the country). Recently, on September 22, 2020, Maharashtra also became the only state to declare a state mangrove tree species – Sonneratia alba – to raise awareness and dedicated efforts for protecting the ecologically important mangroves.

The Mangrove Cell through programmes such as the UNDP-GEF project has also helped promote alternative livelihood options such as mangrove crab farming, oyster farming and mangrove ecotourism. N. Vasudevan, the principal chief conservator of forests (Forest Development Corporation of Maharashtra) told Mongabay-India that the objective of such activities was to create an ecological as well as economic incentive for local communities to conserve mangroves. Vasudevan was the additional principal chief conservator of forests for the Mangrove Cell and the nodal officer for the UNDP-GEF Project when the Swamini Group had put forth their proposal to the Cell for running an ecotourism activity in the Mandavi creek.

However, it would be unfair to say that the Swamini Group has seen the mangrove safari activity solely as a means of revenue generation, clarified Vasudevan. Sai Satardekar, another member of the Swamini Self Help Group echoed this sentiment as she told Mongabay-India, “One of the biggest joys of being a part of this project is the satisfaction that comes from knowing that by protecting mangroves and by making more people aware about its importance, we are helping protect this boon given to us by nature; protecting it for our children and coming generations.” Having realised the importance of mangroves during their training period with the Cell, the group had put forth a proposal to establish a mangrove nursery, where they could care for saplings and help restore degraded areas. However, despite repeated efforts the group was unable to find a suitable plot of land for setting up the nursery and were forced to shelve it.

“It was disappointing. But we are determined to make this an ecotourism hub,” said Shweta Hule. Over the years, the group have indulged in activities such as setting up an organic farm where they grow vegetables and herbs. The organic produce from this farm is often used in the open-air restaurant that they have set up, which serves local cuisine. Shweta and her husband have also started an eco-stay Bed and Breakfast, built entirely of eco-friendly materials, and which can be disassembled at short notice.

The Swamini model for conservation and women’s economic empowerment

“One of the factors for the Swamini Group’s success is certainly the grit of the group,” said Dhanasree Patil, who heads the Department of Botany at Br. Balasaheb Khardekar College in Vengurla and is a member of the Wetland Committee in Sindhudurg. The Swamini Group has not just successfully demonstrated a model of mangrove ecotourism but in doing so they have also encouraged other groups of women to adopt similar ecotourism ventures. Women groups from Achara and other neighbouring villages and talukas have travelled to Mandavi Creek to take lessons from the Swamini Group.

The Swamini Group has also made the conversation about mangrove conservation more local, shared Patil. “The popularity of mangroves as a topic for discussion has certainly grown since Swamini Group started their activity. From stories in the local media, to the Rotary club printing pamphlets that talk about the importance of mangroves, there’s all that and more happening,” she narrated, on the success of this activity as an effort towards community-led mangrove conservation.

In September this year, the Ministry of Environment, Forests and Climate Change had recommended that dedicated units for mangrove conservation should be established in all states. Appreciating this recommendation, N. Vasudevan shared that while this helps bring dedicated attention towards coastal biodiversity issues, the states must also draw lessons from groups such as Swamini.

“In our patriarchal society, where a woman’s contribution to a family is often unrecognised as it cannot be measured in monetary values, women-run ecotourism activities such as the Swamini mangrove safari serves many purposes. From a conservation standpoint, these women end up becoming community champions protecting the mangroves which are now a source of livelihood for them, and it also helps in increasing the tourism value of mangrove ecosystems. In addition, from a social impact standpoint, as the women are now able to bring tangible economic contributions to the family, they become empowered and more involved in the family’s decision-making processes,” said N. Vasudevan, advocating for why such community interventions should focus on bringing more women to its fold.

“I certainly feel that more women should come forward to take up similar projects. There may be some people who don’t think that women can undertake such projects. But the joy that comes from proving them wrong and making a small contribution towards protecting the natural wealth that has been given to us, is unparalleled,” said Swamini-member, Sai Satardekar.

The story of how the Swamini group went from being just a group of friends with an idea to the paragons of mangrove conservation in the community is certainly an inspiring and exemplary one. Shweta Hule shared that there are times when local people approach her in the market where she sells fish, to strike up a conversation about mangroves.

“It feels great to be recognised for this and to have people enjoy being a part of such an activity, especially considering that initially there were a lot of people who thought this idea wouldn’t work. ‘How will women row boats?’ they would ask,” recounts Hule. Now they know.

Illustration by Pearl D’Souza, an illustrator and visual artist from Goa. Her work reflects her passion for mental health, gender, feminism, body positivity and social good. Pearl is a proud plant mom, and is often found drawing botanicals in her journals.