Zebra loach a popular aquarium species is being “unsustainably fished” out of Western Ghats’ waters to grace fish tanks across the world, says a new study underscoring the execution of existing policies and laws to sustainably harvest ornamental fishes in which trade is legal.

The study based on an analysis of export-import data on live aquarium fishes from April 2012 to March 2017 from five Indian cities has revealed that as many as 265,610 zebra loach (Botia striata) individuals were exported from India to sixteen different countries in five years; this trade volume amounts to 148 zebra loaches exported per day to feed the international aquarium pet trade.

But this is only the tip of the iceberg because the researchers, Department of Zoology, Maharashtra College of Arts, Science and Commerce, Mumbai and Food and Natural Resources, Czech University of Life Sciences Prague, Czech Republic looked at airport consignment records and “there is a high possibility that data from other routes, such as seaports, was not recorded.” 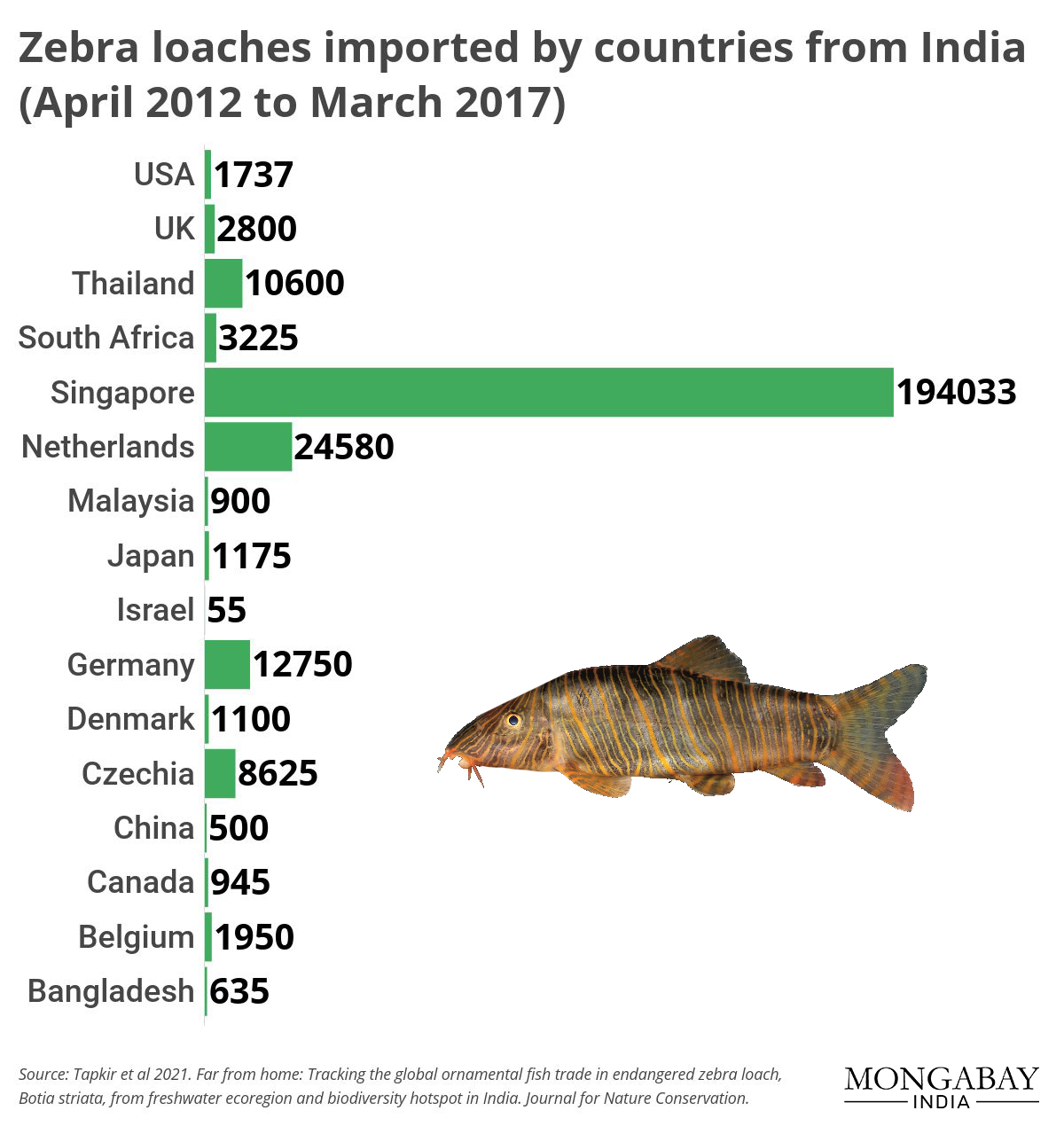 “We recommend that vulnerable species like the zebra loach should be included in the CITES appendices in order to get accurate export level data and establish sustainable ornamental trade in freshwater fish,” said the study’s corresponding author Sachin Gosavi. CITES (the Convention on International Trade in Endangered Species of Wild Fauna and Flora) is an international agreement between governments to ensure that international trade in specimens of wild animals and plants does not threaten their survival in the wild.

Loaches belonging to the genus Botia, are listed by Marine Products Export Development Authority (MPEDA), an agency under India’s Ministry of Commerce and Industry, as commercially important freshwater ornamental fish. Zebra loaches are endemic to the Western Ghats, and in Maharashtra’s Koyna river basin in the northern Western Ghats, the zebra loach is called “vaghya” (tiger in Marathi language) alluding to the tiger-like stripes on its body.

While unravelling the impact of the trade on juvenile and mature zebra loach populations in the Koyna river, the researchers found that 60 percent of the exports coincided with the fish’s breeding season, raising questions on the conservation implications.

“If the zebra loach trade continues to operate during the breeding season, carrying a large number of breeders and immature individuals, the population will suffer a severe decline and a lack of potential breeders in the near future, driving the species closer to extinction,” said co-author Pradeep Kumkar, Ph.D. Student, Czech University of Life Sciences in Prague.

Gosavi adds that while the trade is legal, the extent and manner of trade are unregulated “because this species is endangered, already has an extremely limited distribution, is subject to several anthropogenic stressors (such as sand mining in the Koyna river), and currently has no artificial breeding programme to support its trade, leaving wild populations as the only option”, subjecting the fish to over-exploitation.

To counter this over-exploitation of wild-caught fish, Kumkar underscored the need to urgently develop an artificial breeding programme for zebra loach and other ornamental fishes. His contention is supported by the data analysis that reveals a deeply entrenched demand for the species abroad.

Among the five Indian cities for which airport export-import data was available, Kolkata emerged as the top exit site from where the highest number of zebra loach consignments were exported, followed by Bengaluru, Mumbai, Chennai, and Kochi. Among the recipients, Singapore was importing the most fish at 73.05 percent, acting as a transit hub for the distribution of zebra loach individuals across the globe. 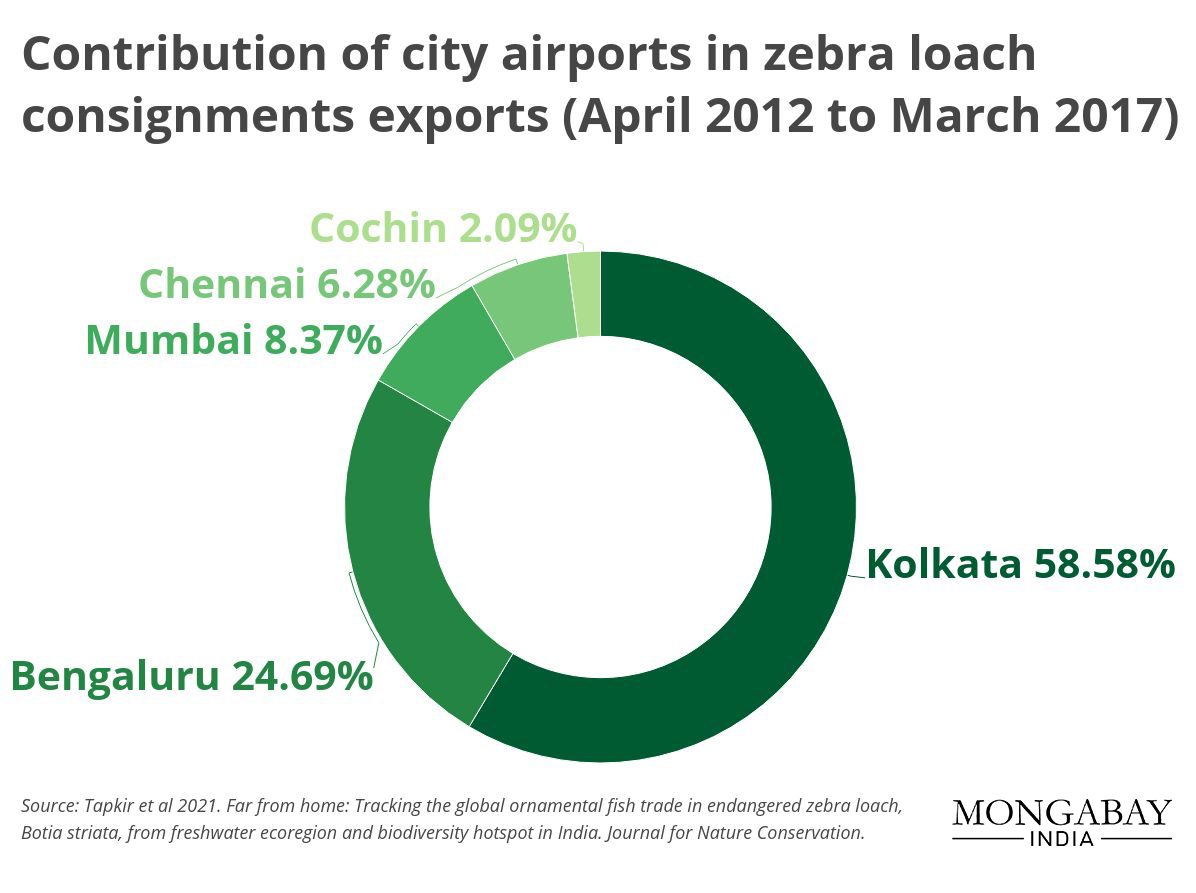 After Singapore, it is the Netherlands, Germany, Thailand, and the Czech Republic that receive the most zebra loach consignments while 11 other countries import negligible quantities. There is an “unabated interest” in zebra loach in countries such as the Czech Republic, which is the trading hub for ornamental fish in the European Union. The analysis also highlighted a sharp decline in exports of zebra loach from 2016 to 2017 which is likely due to the decline in fish availability from overfishing and not from the availability of cheaper alternatives; customers specifically ask for the loaches, the researchers added.

The research also sheds light on the “poor enforcement” of biodiversity regulations and wildlife trade laws within Asia as zebra loach was categorised as endangered in 2011 by the International Union for Conservation of Nature but has not yet been listed in CITES appendices.

Listing in CITES would be a welcome step but that will only regulate the import and export of species between countries, pointed out legal policy expert Debadityo Sinha. “Protection of any wildlife species depends much on how well the domestic laws support it,” Sinha, a Senior Resident Fellow at Vidhi Centre for Legal Policy, told Mongabay-India.

Aquatic conservation biologist Rajeev Raghavan − whose work with collaborators on uncovering the extent, magnitude and conservation implication of the trade of endemic and threatened freshwater fishes from India builds into the current study − observed that the trade of ornamental freshwater fish is difficult to subject to scrutiny because they are not protected under Indian law.

“No species of freshwater fish are included in the Indian Wildlife Protection Act (1972) – except for freshwater pipefishes (which find a place because their entire family, Syngnathidae, which also includes seahorses, are listed). So therefore this trade is not illegal and makes it difficult to monitor,” Raghavan of Kerala University of Fisheries and Ocean Studies, Kochi, told Mongabay-India, adding that the reliance of marginalised artisanal fishers on the ornamental fish trade adds complexity to the bid for their protection under Indian law. 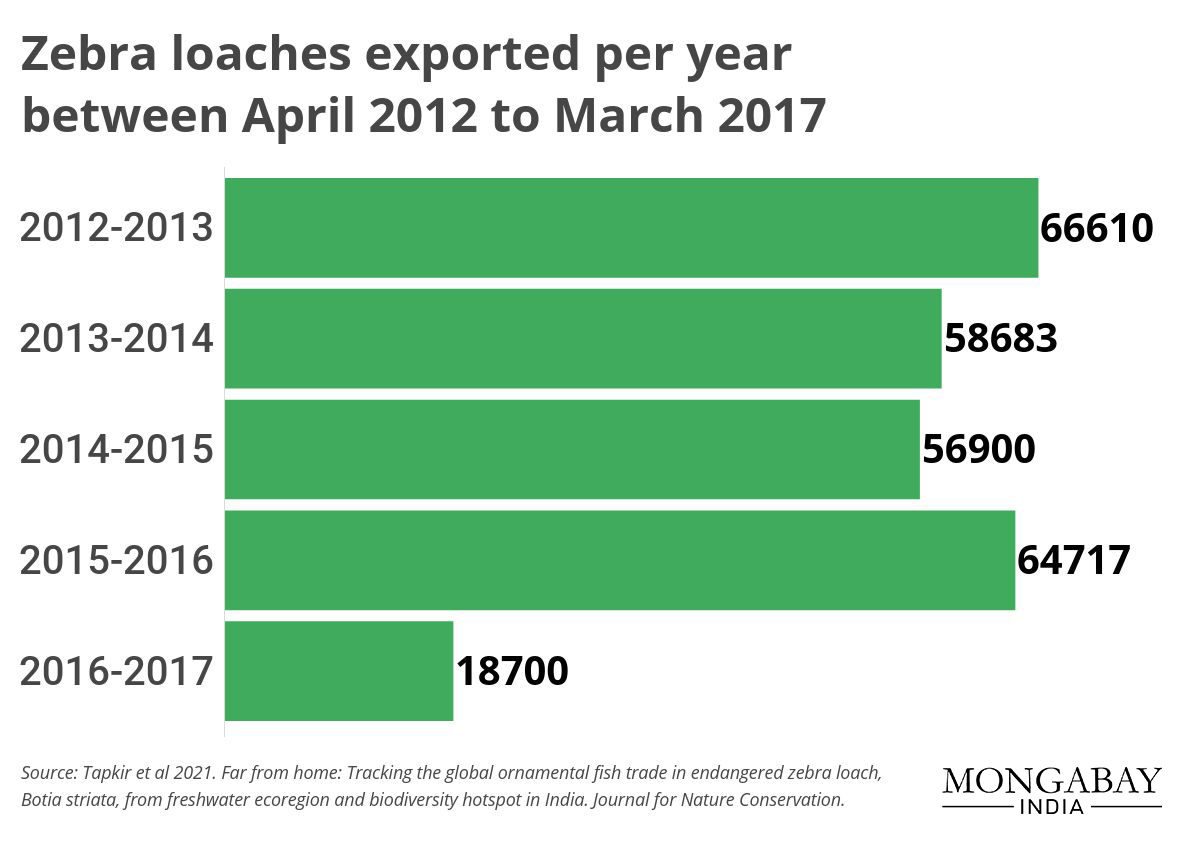 “It would essentially certify that the product or service (in this case fish) was sustainably harvested. It did not take off in the way it was expected to. Everything that looked at sustainability in the long term was incorporated into the programme,” noted Raghavan. But the GC guidelines also had gaps. For example, the guidelines list 103 species of which a significant number are “highly threatened” (such as Pethia pookodensis of the Pookode Lake in the Western Ghats) and “prioritising these highly threatened species for GC and trade would compromise the conservation efforts that they otherwise deserve,” added Raghavan.

Mongabay-India reached out to MPEDA for comments but did not receive a response at the time of publishing.

Gosavi iterates the need for involving communities in the conservation of threatened freshwater fish and that a complete ban on its fishing cannot be the solution because the harvest of the fish is a source of income for various marginalised communities that live along the rivers. “They can be provided with suitable livelihood options, particularly during the breeding season of these threatened freshwater fish,” he said.

Bengaluru-based aquarist Nikhil Sood who runs an ornamental fish export business points out that while India’s share in the global ornamental fish trade (export) is less than one percent “it is focused on select few species” which further imperils them. Sood bats for replacing wild-caught fish with captive-bred fish in a phased manner for exports.

“The technology is there; it takes time and money and it requires you to have a certain scale of business only then it becomes feasible. The majority of the people doing the trade are not focused on marketing something sustainable; today in the West if you sell something that is bred sustainably or harvested sustainably you can expect and end up with a slightly higher price which makes captive breeding more conducive,” Sood told Mongabay-India.

Sood who is currently captive-breeding aquarium fishes Dawkinsia rohani, Dawkinsia filamentosus, Dawkinsia apsara, Pethia setnai, Haludaria fasciata, is working with collaborators to develop the protocol to captive breed snakeheads by end of 2022 or early 2023 and believes “we will no longer need to harvest snakeheads from the wild.”

“We are also trying to tie up with a forest department of a state in northeast India to do captive breeding in the villages where the fish are caught; wild harvesting will stop and the locals will have a reason not to destroy the habitat because they will have livelihoods,” said Sood.

“The majority of the exporters do not invest in their collectors, the people who catch the fish and this is where the highest mortality of fish happens. Over the last few years, we have focused on ensuring that collectors are well versed with how to deal with particular fish; we have given them the required know-how. We do not harvest fish and keep them, only when we have orders do we harvest,” he added.

“The ornamental fish trade will undoubtedly continue, but now is the time to promote public awareness of the conservation initiatives, which will introduce captive-bred fish rather than wild-caught species to safeguard the long-term survival of the country’s unique freshwater fish diversity,” adds study co-author Lukáš Kalous of Czech University of Life Sciences Prague.