Human-wildlife interactions are on the rise. But not all of them are positive. In India, every year, hundreds of people and animals die due to human-animal conflict. Conflicts with wild animals can have a far-reaching impact on their survival and numbers. While this is apparent across the world, some parts of the globe are more at risk than the others.

Home to two-thirds of the world’s Asian elephants and tigers that share space with 1.4 billion people, at a relatively high density of over 400 people for every square kilometre, India witnesses a range of realities around these interactions, that calls for urgent global attention. Documentary photographer Senthil Kumaran intends to show these realities to a wider audience. At the end of a decade-long effort to capture human-tiger conflict in various parts of the country, Kumaran, who is from Madurai, Tamil Nadu, produced an impressive body of work titled Boundaries: Human-Tiger Conflict, that earned him the 2022 World Press Photo, one of the most prestigious awards in photojournalism, which has declared 24 regional winners from 23 countries this year.

Accolades are not new to Kumaran; he has bagged 20 international awards so far. In a freewheeling chat with Mongabay-India, the photographer talks about human-wildlife conflicts in India, his long and tedious work process and the lessons he has learned during his career spanning two decades, documenting lives of all kinds.

Mongabay: Let’s start with the longest-standing debate in conservation (which has also been subtly reflected in your work) — Should conservation be people-centric or wildlife-centric?

Senthil Kumaran: As a documentary photographer, my work reflects the perspective of both sides. I stand with environmental and wildlife conservation, and I also want to expose the problems faced by local people.

We cannot resolve this only from an ecological perspective. We could in fact protect the wildlife by protecting the local village residents and the tribal people from the damages caused by the wildlife. Every year, almost 500,000 people are affected by human-elephant conflict in the country. The safety of wildlife is a concern when the affected villagers turn against the animals, in order to protect themselves from the damages caused by them. This antagonism is a great danger to elephant conservation with retaliatory killings of elephants being reported in many states.

If elephant conservation is to succeed in India, then the human-elephant conflict will have to be resolved or minimised to a point where it becomes tolerable to local communities.

Mongabay: Your visuals show several shared landscapes among humans, tigers and elephants. When you shoot a project for years, the situations on the field keep changing too. What are your observations on these changes and how do you include that in your work?

Senthil Kumaran: When I started documenting this in 2012, the country was ready to do anything to protect tigers from extinction. We had just 1,700 tigers left. Various programmes were implemented, and many tribal villages were relocated for tiger reserves. In 2022, the tiger population has doubled, and the relocation programme has slowed down leaving many tribal villages in the core tiger habitats.

In some tiger reserves, the forest departments are facing many challenges due to the increased tiger population where tigers are forced to compete with humans for survival. When some tigers become ‘man-eaters’, the authorities are hard-pressed to eliminate them. The primary reason behind all these is deforestation. From focusing on tigers and elephants, my work has expanded to explore deforestation as well. All these issues are interlinked.

Mongabay: Your storytelling includes the history, culture, and narration of incidents in different landscapes. Could you take us through your work process?

Senthil Kumaran: Before I set out on this work, I thought it would be very difficult. Fortunately, in 2012, I got the opportunity to document a wounded tiger in Valparai that was being treated and sent back to the forest. This incident was a breakthrough that helped me build a good rapport with the forest department and researchers. Then I took my documentary journey to Sundarbans and the ‘man-eating’ tigers there. My friends helped document tigers in Tadoba.

The experiences were different in different landscapes. What a tiger means to people also changed from place to place — from those who think protecting tigers is a threat to their lives, to tribal people from conflict zones who worship tigers. There are also cases of villages poisoning tigers to save their livestock and sometimes tigers are brutally attacked. I have also met villagers in tiger reserves who have never seen a tiger there. These are various facets of human-tiger coexistence. In all cases of conflicts, the only objective of the humans is to save their crops, cattle and themselves from danger.

Mongabay: Another interesting feature of your visuals is that we get to view the situation from the perspective of different stakeholders. Removing any of these layers can make the story incomplete. Can you share a little about your research process before you pick up the camera?

Senthil Kumaran: I look at my photo documentary from three different perspectives. I have learned well from my experience, looking at the problems faced by the wildlife, the people of the tribal villages and the forest department. I relentlessly gathered information in bits and pieces on human-wildlife conflicts in India which helped me to create a good documentary.

Since 2008, I developed a good relationship with conservationists and forest departments. I have been involved in various conservation activities like awareness programmes, animal census and animal relocation operations. In 2012, I met the Ajay Desai (late), also known as the Elephant Man. He was the most experienced person in elephant research and conservation in India. My camaraderie with him, helped me understand the various dimensions of this issue. 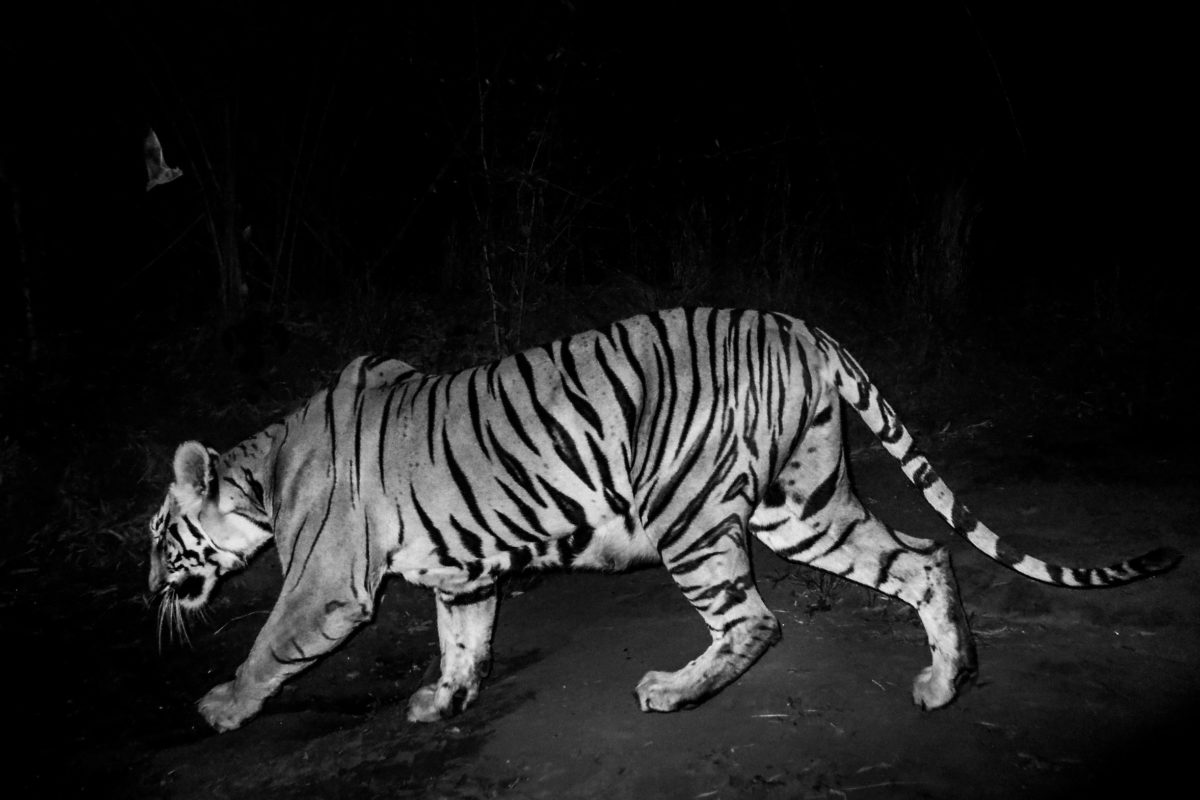 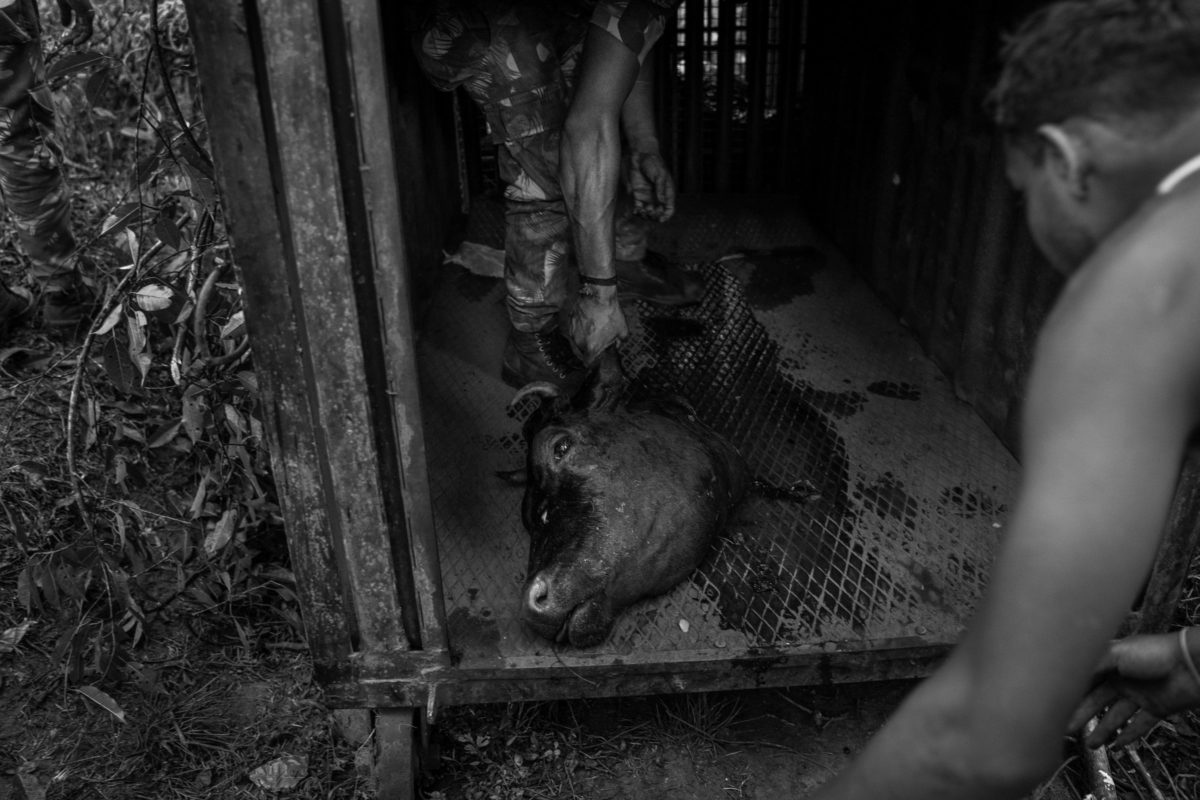 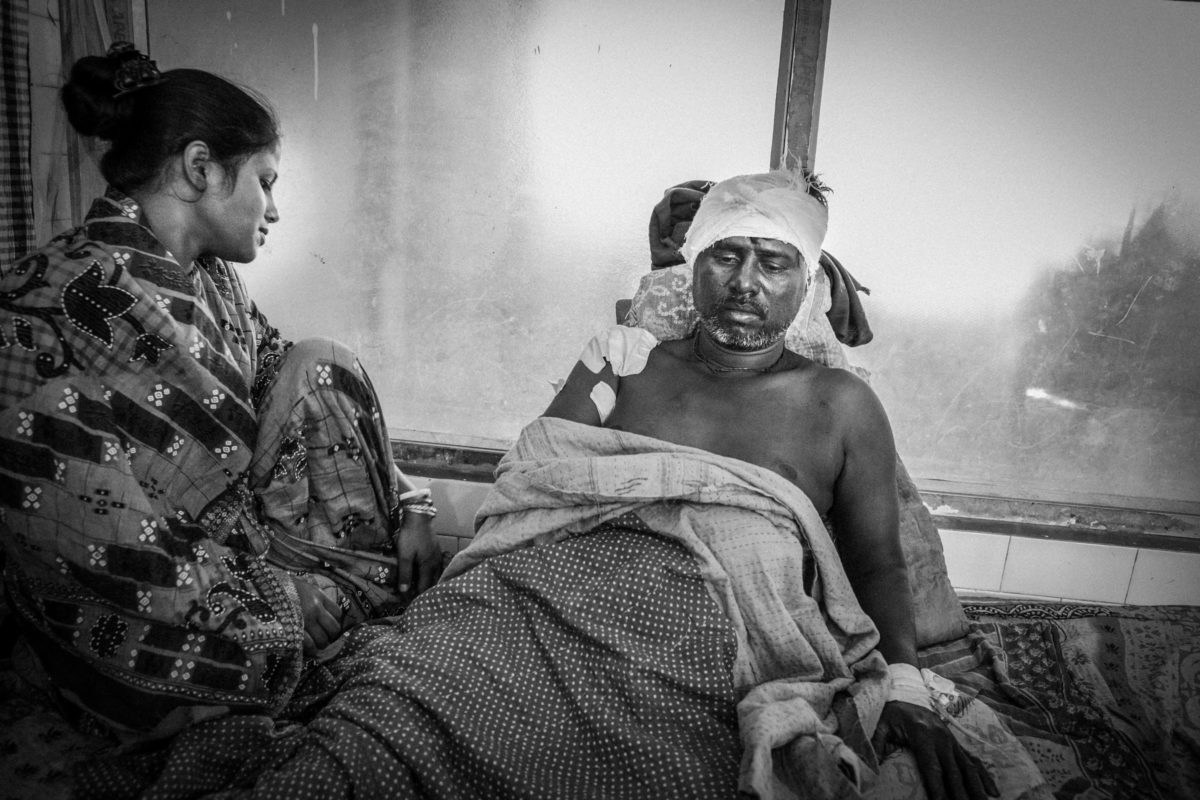 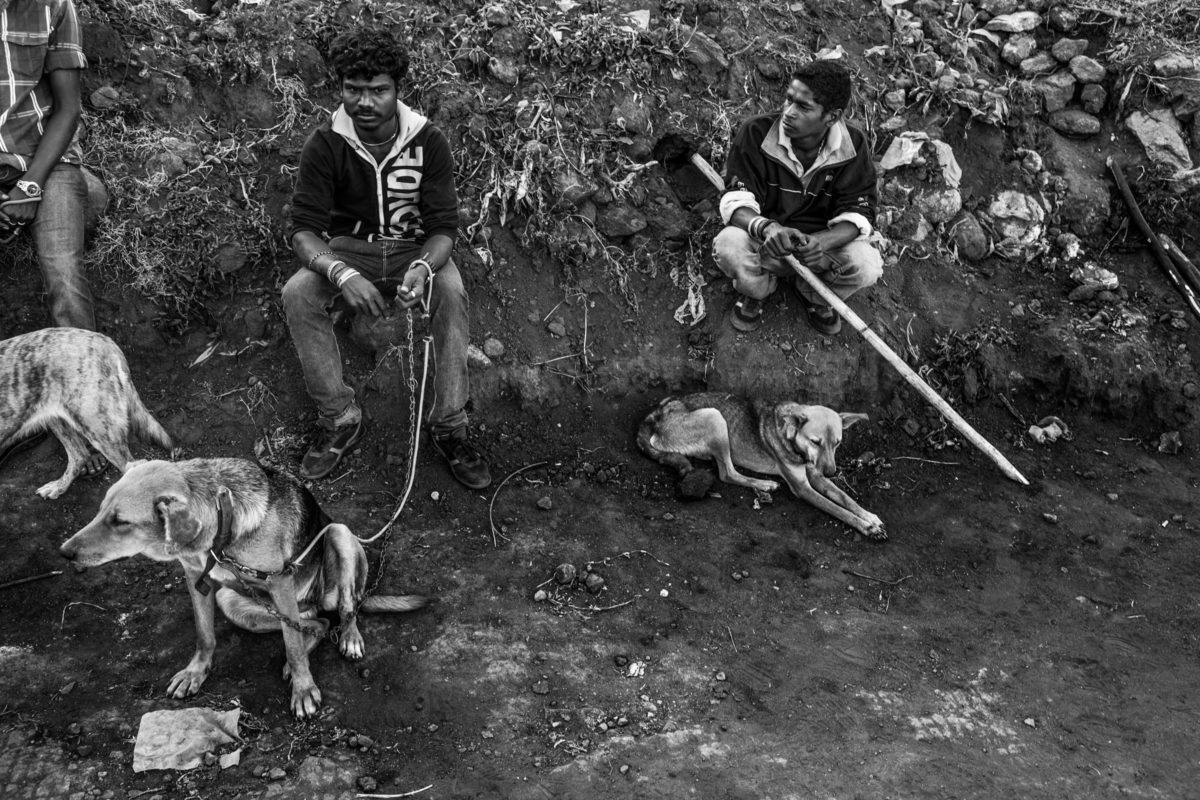 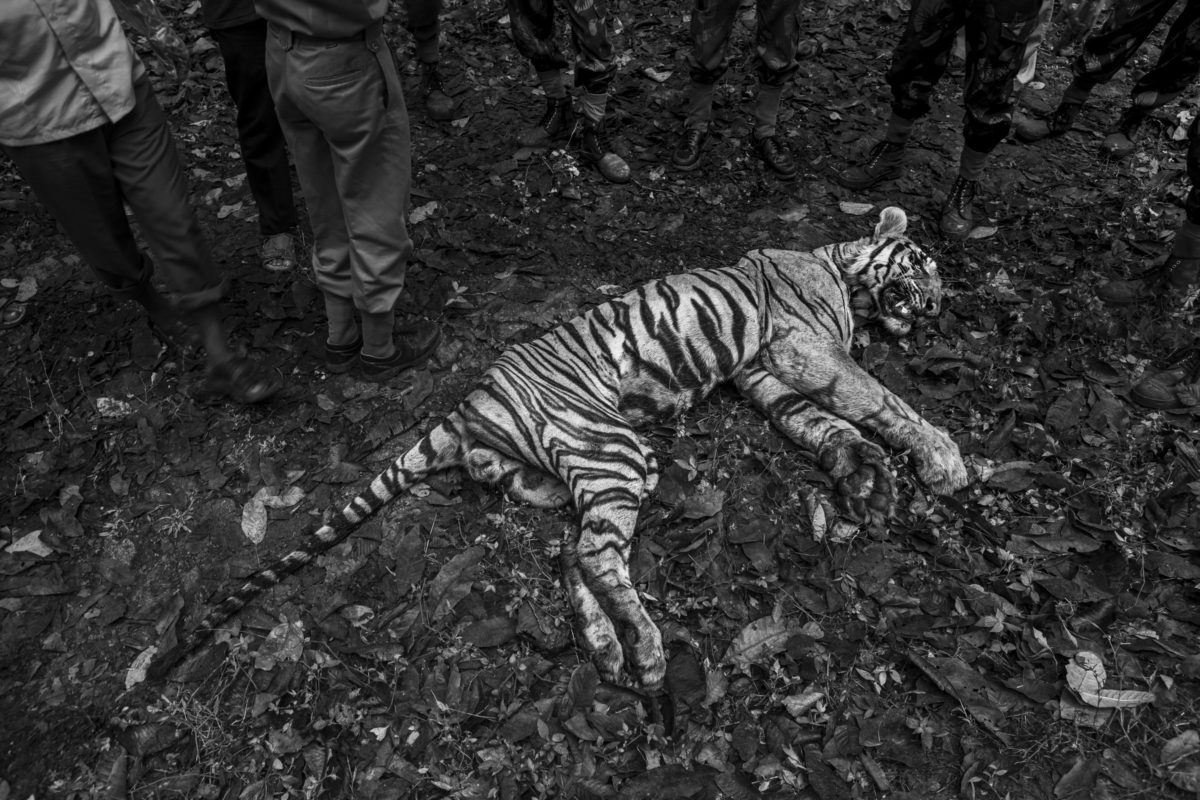 Mongabay: You have covered human-wildlife conflict for a long period of time across geographies. How did you manage your travel and how was this planned?

Senthil Kumaran: From the beginning, I was aware of the importance of being at the right place at the right time to document an issue like this. I had to travel quickly. Even if I didn’t know where I was headed next, I would always keep a bag with travel essentials ready. This [Boundaries: Human-Tiger Conflict] documentary was self-funded. Since I don’t have a car, I had to take public transport; sometimes travelling 14-15 hours through various modes of public transport just for a few hours of documentation. During such travels, I used the toilets in the bus stands to refresh myself and head to the field directly from there. I was travelling without enough food and sleep. The images I got, made all the struggle worth it.

Mongabay: A conflict situation can turn ugly, especially in case of human fatalities. You’ve been in such situations where the interactions could turn violent. How did you ensure your safety? Did you receive help from the communities?

Senthil Kumaran: It is difficult to travel with the camera during protests against these conflicts. In 2015, a 38-year-old tea estate worker was mauled to death by a tiger near Gudalur, in the Nilgiris which set off panic and protests there. Forest department vehicles were set on fire and their office was destroyed by an angry mob.

When I reached there with the help of a friend, Section 144 had been imposed. I was about to return without images when I noticed the ambulance with the victim’s body after the post-mortem in front of their house. I wasn’t sure if I should take photos, but I struck up conversations with people gathered there to gauge the situation. Realising I meant well, they let me take 10-15 images which later became some of the very important visuals of my documentary. Establishing trust and developing a good relationship with the people is important.

Mongabay: The increased focus on charismatic megafauna like tigers and elephants in conservation programmes and policies, ignores various other key species and restricts the lives and livelihoods of forest-dependent communities. The tiger and elephant numbers have improved now, but their interactions with humans have increased. Where do you see the problems and what are the solutions?

Senthil Kumaran: Conservation programmes like Project Tiger seemed just for the tigers in the beginning but they helped protect vast areas of forest land and the biodiversity within. At the same time, I agree that other animal species also deserve the same level of attention and protection that are given to tigers and elephants.

The tiger population in India has doubled in the last decade but the total tiger population now is only eight percent of what we had 100 years ago. According to reports, 35 percent of tigers in India live outside PAs and share space with humans. In the last century, the British had destroyed vast areas of forests to grow cash crops. In the last five or six decades, we lost more forests to ‘development projects’. Almost 80 percent of the elephant corridor as well as the lives of various species in these scattered forests are adversely affected resulting in human-wildlife conflicts. The level of importance given to a particular animal has not been given to protect its habitat. And there lies the problem.

Mongabay: You’re not formally trained in photography. I’ve read that when you got your first camera, you photographed sunrise for eight months continuously until you got what you wanted. What’s the lesson in perseverance to produce outstanding work that you would want to share with your contemporaries and aspiring young photographers?

Senthil Kumaran: Seeing a tiger was my dream since childhood. That dream and curiosity drove me to learn more about wildlife and travel. For the last 20 years, I did many photo stories. As a documentary photographer, my photographs reflect my vision and my mindset. All my photographs are witnesses to what I have seen and experienced.

Curiosity, excitement and wonder should never be lost in an artist. They should be as curious as a child and have an enthusiasm for knowledge and excitement to see and experience new things. You are the creator and spectator of your work.

Be honest and never lose your integrity while producing quality work. There are millions of photographs being published on various platforms daily. Where your photograph stands among them and what value and surprise it provides determine its value.