The monks who protect the Bhagajang wetland

Seated on a carpet on the floor of the Buddhist monastery in Itanagar, Phuntsok Wangchuk cuts a lonely figure on this particular Friday morning. With a rather flimsy surgical mask covering his nose and mouth, the lama or monk, appears to still be taking Covid-19 precautionary measures when most people in Arunachal Pradesh have discarded them. Using a wooden twig, he is rolling cotton wicks that will be used to light oil lamps that are used to offer prayers.

Wangchuk is a Buddhist monk from the Monpa tribe that traditionally live in the West Kameng and Tawang districts of the state. Scattered groups of the tribe are also said to reside across international borders in Bhutan and China. For centuries, the Monpa have been adherents of Tibetan Buddhism and Tawang houses the largest monastery of Tibetan Buddhism in the country and is second in size only to the Potala Palace in Lhasa, Tibet.

Founded in around 1680-81, the Tawang Monastery’s Tibetan name is Gaden Namgyal Lhatse (celestial paradise in a clear night), and was affiliated to the Drepung Monastery in Tibet until the Chinese occupation. Located at around 3,000 metres above sea level, the monastery’s complex reportedly houses around 500 monks.

Having spent two months in the town of Tawang, the administrative headquarters of the eponymous district, Wangchuk is now in the state capital Itanagar and living at the compound of the gompa or monastery.

At this particular time today, he is alone inside the gompa. “The other lamas have gone to the chief minister’s house to perform a religious ceremony,” he informs.

Dressed in the standard-issue maroon/orange-hued clothing, he seems to be blissfully unaware of the important environmental work he does for three months of the year.

Arunachal Pradesh has 1672 high altitude wetlands (above 3000 m altitude), among the highest such wetlands in India, after Kashmir.

At an elevation of above 4,000 metres in Tawang district lies the Bhagajang Wetland Complex that has around 20 high-altitude lakes ranging from 0.01 sq km to about 0.35 sq km. At least 12 of these are said to be considered sacred by Buddhist communities.

Bhagajang and other wetland complexes in the state act as reservoirs for the three major rivers – Tawangchu, Nyamjangchu and Kameng River, which are important tributaries of Brahmaputra.

Bordering West Kameng in the south and Bhutan to the west, the wetland complex is around 18 kms from the national highway on Sela Pass – a strategic mountain pass connecting Tawang district to the rest of India.

For residents who live in the rugged mountains and thick forested areas of Arunachal Pradesh, coupled with bad road infrastructure, distance is measured not in kilometres but in hours – “There is a road and it takes around seven hours to reach from Sela Pass,” the lama says, rolling more cotton wicks.

Since 2006, Wangchuk has spent around three months from August to October every year at the Bhagajang Wetland Complex to guide and care for the pilgrims who visit the site during that small window of time when the road and area are not covered in snow.

He says that pilgrims from the two districts of Arunachal Pradesh as well as from Bhutan come for an annual pilgrimage. This year the Bhutanese pilgrims could not come because of the Covid-19 travel restrictions. The entire complex is held in religious reverence, said Wangchuk, adding that there are images of deities pained on stones and boulders in the area.

During that period, as pilgrims come and go, there are usually two or three monks who stay for three months, as do the Brokpa yak herders who bring their livestock to graze in the area.

As we converse, there is very little he speaks about on the issue of environmental protection work that the monastery is reportedly doing. 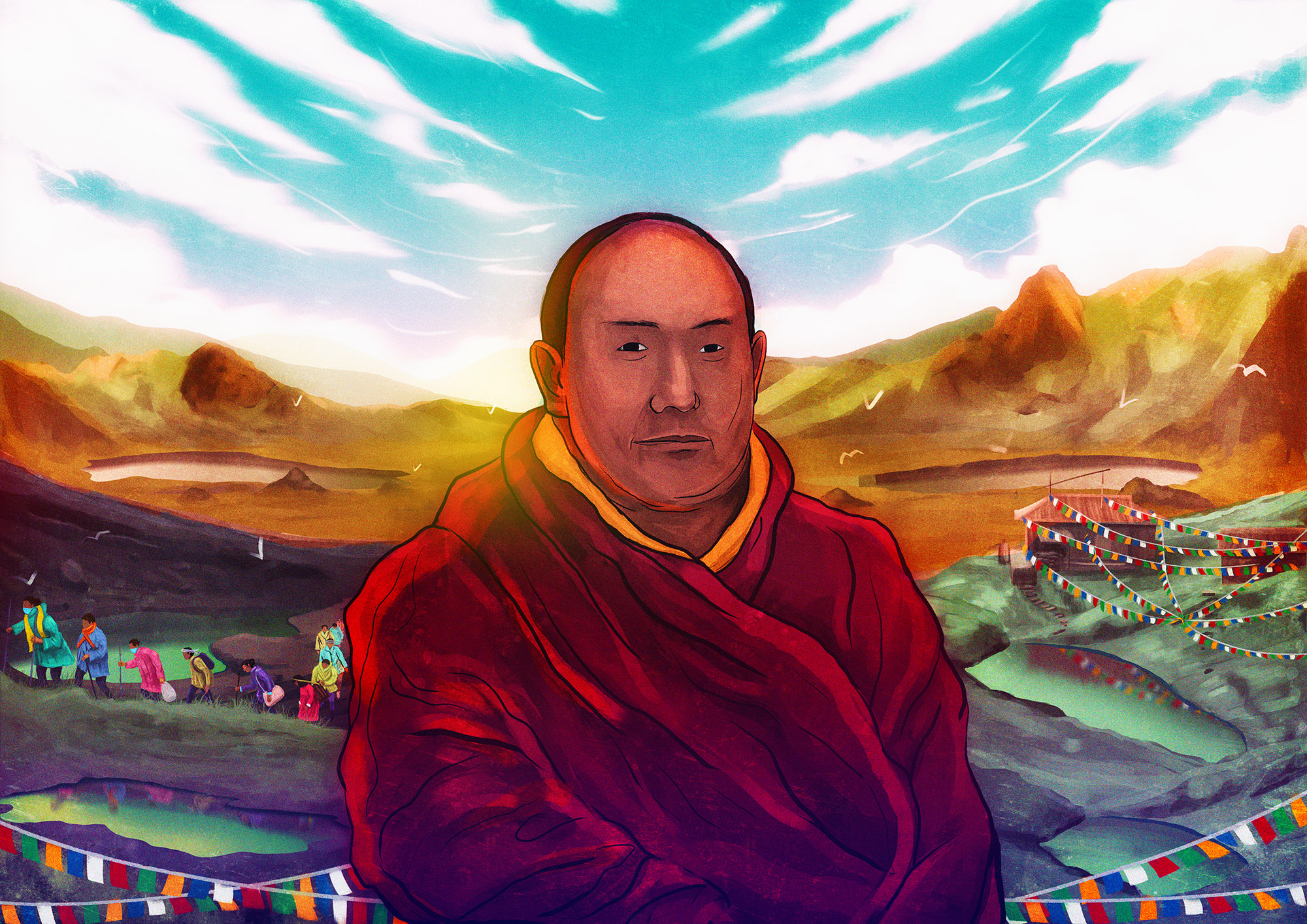 Phuntsok Wangchuk, a Buddhist monk guides and cares for pilgrims that visit the sacred wetlands part of the Bhagajang Wetland Complex in Arunachal Pradesh. The high altitude wetlands that have ecological and cultural significance were being impacted by tourism. Illustration by Kowsick Borgohain for Mongabay.

Monks team up with conservation group

Arunachal Pradesh gets an average of 1.9 million tourists each year (domestic and foreign), as per the official tourism survey of 2014-15. Of that, Tawang district, gets more than 150,000 visitors annually. There is no official record of number of visitors at Bhagajang specifically, though individual estimates peg it at between 400-1000 visitors per year.

The concerns about the impact of tourism on the environment however, came up over a decade ago and in August of 2009, officials from the Tawang Monastery and WWF India agreed to a partnership to address some of these issues. According to WWF India, some of the threats to the region included inadequate infrastructure and resources to support the increasing number of pilgrims visiting these lakes, cutting of vegetation patches to use for fuel, increase in pressure on the grazing grounds, among others.

Officials from the Tawang Monastery decided to put an immediate ban on the cutting of firewood from the area, and it promised to provide high-efficiency kerosene stoves to the monastery which would be used by visitors for cooking during their stay, according to WWF India.

Strict regulations were put in place to ensure that visitors carrying food packed in non-biodegradable packets would return with the waste or if left with bio-degradable waste they would have dustbins (provided by WWF) in various places for disposal. Specific sites were designated for camping and WWF would help construct toilets near these sites.

Kamal Medhi, the Landscape Coordinator for the WWF’s Western Arunachal Landscape programme, said that many of those agreements have been fulfilled. He said that dustbins have been placed and that the kerosene stoves were given to the monastery in 2012 and the fuel itself is provided by the district administration.

To ease living conditions in the area, the WWF also provided tents, water tanks, and built toilets to address the issue of open defecation.

Another issue was the offering of khadas, a silky traditional scarf of religious significance, was being thrown into the lakes and having an adverse impact on the ecology of the complex. Medhi said this was resolved to an extent by building wooden hangers across the lakes to enable pilgrims to tie the khadas instead of throwing them in the lake.

The WWF also lists a lack of awareness about the value of the wetlands as an area of concern.

Leopard cat and other species at Bhagajang

Speaking from his residence in Tezpur in Assam, Medhi said that there is a need to revamp the approach to the ecosystem protection. He said that the local community should view these steps not just as a means to preserve religious practices but also consider the environmental importance of taking these measures.

The Bhagajang complex supports several floral and faunal species. Rhododendron and juniper shrubs, along with a variety to medicinal plants are mostly found in the region. Around 78 plant species have been recorded in a WWF-India baseline study in 2013-14 and secondary information collected as part of the study indicates presence of endangered species such as musk deer (Moschus chrysogaster), carnivores like Asiatic wild dog (Cuon alpinus) and the red fox (Vulpes vulpes).

In 2014, a camera trap setup by the WWF captured images of a leopard cat at an elevation of 4,250 metres, making it the highest recorded sighting of the animal at that time in India.

Wangchuk, who has been going there for the past 14 years and was there even during the pandemic last year, has never seen any large animals.

While researchers who have spent time in the area have documented records of sightings of several other animals including the red panda. The 14-year veteran, however, claims to have not had any such luck apart from sighting migratory birds.

“We see ngangapa and aakpu,” he says, using the local names of species of birds I have not been able to identify. Almost as nonchalantly as the entire conversation has gone up to this point, he says he has also seen “junglee billi (wild cat)” – a colloquial term that could mean anything from the leopard cat to a civet.

Having been a regular visitor to the wetlands, Wangchuk says that it is expected of him that he will go this year too. Eight years ago, his friend and travelling partner, Nawang Tashi, died. He might just make one more trip this year, too.

Illustration by Kowsick Borgohain, an illustrator and designer based in Guwahati. He is a self-taught artist, practicing traditional and digital art. He also works as a faculty member at a multimedia institute.