[Commentary] Did the budget miss the bus for building climate resilience for agriculture?

When I was a schoolboy in Kerala, there was an annual calendar event that we hated. It was the date June 1. That was the day on which the schools reopened after summer holidays, and also the day when the southwest monsoon made its dramatic appearance over Kerala. We trudged to school drenched, and sat dripping till we returned home later in the afternoon to a change of clothes.

This year June 1 came and went, sunny and dry. It did not rain till June 8 in Kerala, and that too when the low pressure – which later developed into Cyclone Vayu – was passing through the Arabian Sea close to the Kerala coast. The impact of the cyclone lasted for a few days, and then it has been a blank with the exception of some isolated heavy showers on a few days in between. It picked up, erratically though, after few days of July.

The India Meteorological Department (IMD) data shows that from June 1 to July 11 the rainfall over Kerala has been deficit by 43 percent. In June the deficit was 48 percent. In other words, in the first month of the southwest monsoon, Kerala got only half of the rains it was supposed to get. On the other hand, during the same month, Mumbai got nearly its month’s rain over two days, causing waterlogging and floods, and in Chennai, the four reservoirs supplying drinking water to the city, ran dry causing a water crisis.

Read more: Why the city that never stops comes to a standstill when it rains on the Mumbai situation; Chennai water crisis once again exposes the city’s climate vulnerability on the Chennai situation and Southwest monsoon plays truant in Kerala on the Kerala situation.

It is not as if situations of excess and deficit presenting simultaneously have not happened in the past. In recent years though, they are becoming more frequent and more intense, and that is seen as an indication of a changing climate. In the new normal it is becoming increasingly difficult to predict any form of consistency and reliability in weather and climate patterns.

Climate unreliability has serious implications for the economy

This unreliability has serious implications in a country where agriculture employs nearly half of those employed and supports 16 percent of the GDP. The Economic Survey of 2017-18 had dedicated a chapter on the impact of climate change on Indian agriculture. Using IMD data, the survey notes an increase in average annual temperature between 1975 and 2015, and a decrease in average annual rainfall in the same period. The number of dry days (rainfall less than 1 mm in a day) and wet days (rainfall more than 80 mm in a day) has also increased. This means that in the past four decades the country has become hotter, drier, and extreme weather events have become more frequent.

The survey further adds that the impact of temperature and rainfall is highly non-linear and is more when the temperatures are very high or when there are strong shortfalls in rainfall. For agriculture, the adverse impact is more in the unirrigated tracts than in the irrigated ones.

It is not just the quantum of the rains, but the pattern of the rainfall can also impact agricultural production, states the survey. Each additional dry day (when the rainfall is less than 0.1 mm) can reduce yields by 0.2 percent on average and by 0.3 percent on unirrigated areas. The impact of unpredictable rainfall patterns gets accentuated in agricultural production because many of the newer generation of crops bred in international, national research institutes and agricultural universities are designed for very specific growing patterns. And when these get disturbed their productivity also drops.

As eminent agricultural scientist M.S. Swaminathan often states, agriculture in India is a gamble with the monsoons. With climate change, the risks are only going to increase in this gamble. 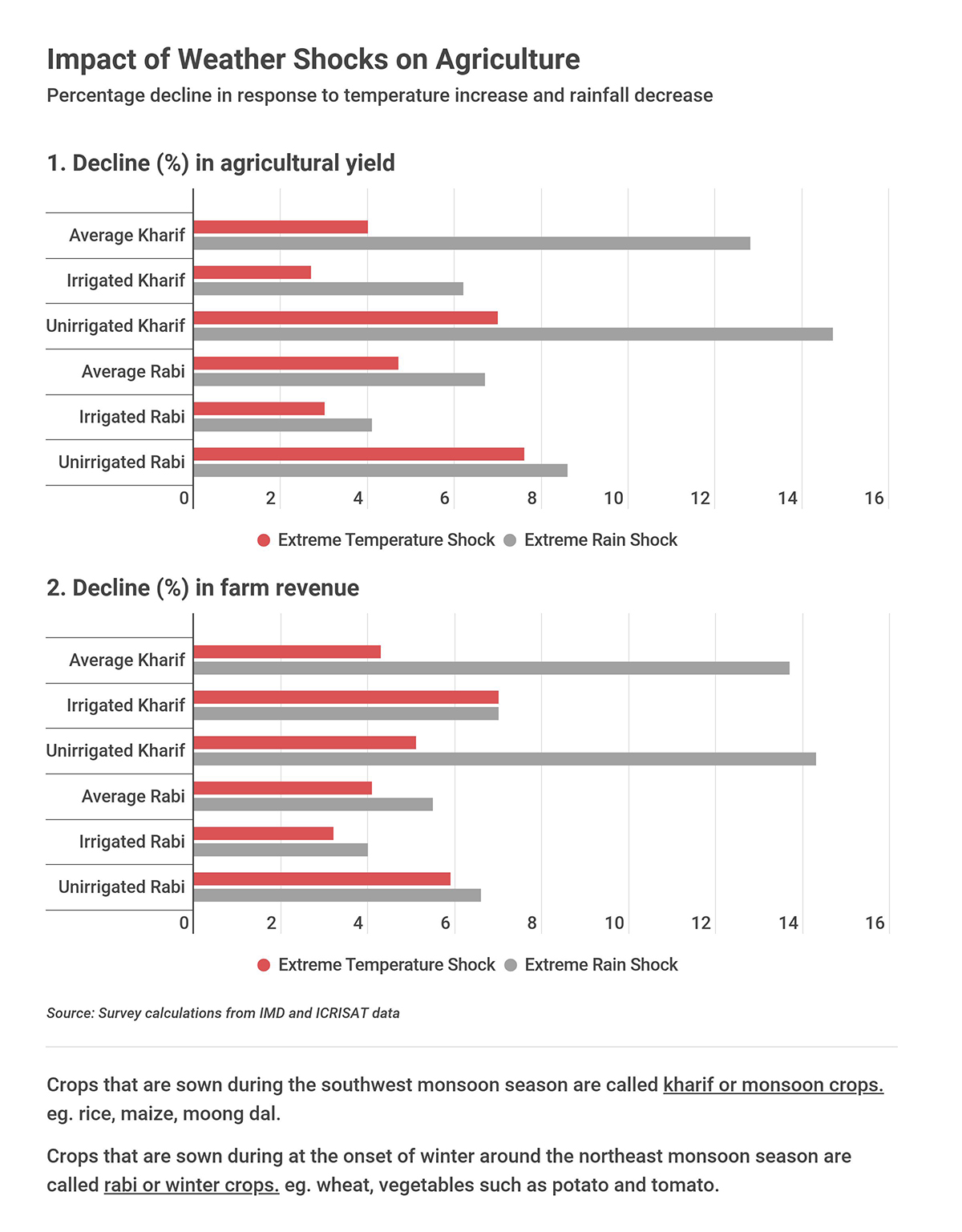 Lost between the yin and the yang

Ironically, this year’s volatile southwest monsoon comes after a tempestuous national election process. If there was a dominant leitmotif during the campaigning it was the yin and yang that was projected by the two main competitors. While Narendra Modi, incumbent prime minister and the Bharatiya Janata Party’s (BJP) lead candidate, projected strong masculinity in his campaign, the main opposition candidate, Rahul Gandhi of the Indian National Congress (INC), projected the obverse.

One was a campaign built on the voice of the majority community, on aspiration, nationalism and national security. The other was a campaign built to give voice to the unheard farmers, unemployed and was against corruption. On May 23 it was clear whom and what the voters wanted in terms of parliamentary seats. However, what should not be overlooked is that there were 119 million voters who had supported the narrative that had lost the elections.

After the elections in five states of Chhattisgarh, Madhya Pradesh, Mizoram, Rajasthan and Telangana, in November-December 2018, it was felt that agricultural crisis and environmental issues would drive the narrative for the national elections. Rahul Gandhi emphasised it during his press conference after his party won the state elections in Chhattisgarh, Madhya Pradesh and Rajasthan. Notwithstanding all this, issues related to national security overshadowed everything else during the national elections.

The vagaries of the season come at a time when the new government would have liked to have a good monsoon in the first year of its second term. Even though agriculture accounts only for 16 percent of the GDP, in India its impact stretches into the secondary and tertiary economies. When farmers have a good harvest and money in their hands, their immediate response is in buying consumer goods, white goods, clothes, motorcycles and other vehicles. This triggers the sales in the manufacturing sector, and in turn the services sector. A poor year agriculturally means the footprint is felt in the secondary and tertiary sectors too.

Considering this background, it was anticipated that the government would make budgetary interventions to improve the climate resilience of Indian agriculture. It did not. Finance Minister Nirmala Sitharaman referred to the creation of the Ministry of Jal Shakti, combining two earlier ministries that dealt with water resources. This ministry will reach piped water to every rural household by 2024, and manage the country’s water resources and water supply in an “integrated and holistic manner.”

The Jal Jeevan Mission will integrate all the government schemes to achieve sustainable water supply management, said Sitharaman in her speech. The government has identified 1592 “critical and overexploited” blocks in 252 districts where the integration of government schemes will happen, including money kept aside for compensatory afforestation.

Bolstered by the electoral returns on the BJP’s last mile delivery projects on cooking gas and toilets, the finance minister reiterated the promise of reaching piped water in every rural household by 2024. While attempting to reach piped drinking water to remote households is a commendable gesture, the budget does not talk about from where the water will be made available for it.

With most of the Indian villages sitting within expanse of farmlands, it can be assumed that some water, apportioned from that for agriculture, will be supplied to households. And here comes the catch – there is no mention of strengthening water availability for agriculture. In fact, there is hardly any substantial mention about agriculture in the budget speech.

With monsoons turning truant and most parts of the country being in a flood-drought binary, the emphasis should have been on strengthening the climate resilience of the rural landscapes. This would have given the agrarian communities water insurance for their crops, and also for household supply. Focus on soil and water conservation in smaller watersheds would have strengthened decentralised water availability.

It is not as if such an intervention has not been successfully attempted before by the central government. In his 1999-2000 budget speech Yashwant Sinha, the then finance minister, launched a national movement on watershed development unifying within its ambit the rural infrastructure development programme, rural credit, irrigation, support for self-help groups, and food and agro-processing industries. That was the first budget of the first full term of a BJP-led coalition government.

This national-level initiative, in turn, spurred similar programmes by state governments, especially in the Deccan Plateau region. Then unified Andhra Pradesh, Maharashtra and Karnataka followed up with similarly successful programmes. It is initiatives such as these that the Modi 2.0 government could have revived with planned budgetary support.

In the coming years, June 1 may or may not remain the day when the southwest monsoon appears over the Indian subcontinent. Extreme weather events could also be more frequent and intense. The farmers need to be enabled to be able to mitigate and withstand these shocks. The government missed the bus for this in this budget.

Banner image: Farmlands and agrarian systems in India are likely to become more vulnerable to climate change in the coming decades. Photo by S. Gopikrishna Warrier/Mongabay.