The proposed Bunder diamond block in the Chhatarpur district of Madhya Pradesh has been in the news for the wrong reasons over the years. The diamond mine project, which is now with Aditya Birla Group’s Essel Mining & Industries Limited (EMIL), is once again facing dark clouds due to protests over ecological concerns, as it could result in the felling of over 200,000 trees.

The proposed project will be spread across an area of 364 hectares in the Buxwaha forests, which is about 225 kilometres northeast of Bhopal, Madhya Pradesh’s capital city. The block is estimated to have 34 million carats of rough diamonds. The National Mineral Development Corporation’s (NMDC) existing diamond mine is about 175 kilometres from Bunder.

According to EMIL, it plans to develop a fully mechanised opencast mine and state of the art processing plant for recovery of diamonds with an investment of about Rs. 2500 crore (Rs. 25 billion). It notes that the project, once operational, has the potential to become one of the largest diamond mines in the Asian region. The company targets the execution of the mining lease by the end of the financial year 2022.

However, the project is facing stiff opposition, including social media campaigns. Already, a Public Interest Litigation (PIL) has been filed in the Supreme Court of India, seeking a stay on the project which had been secured by the EMIL in 2019.

“The Forest clearance report shows that the project would cost over 200,000 trees in the forest region and also use a lot of water. We are against the environmental destruction in our area, which is already a water distress area,” said Sankalp Jain, a local youth who is associated with one of the groups running social media campaigns such as ‘save Buxwaha forest’ and ‘India stands with Buxwaha forest’ last month.

This is not the first time that the project is facing resistance. In 2006, the Madhya Pradesh government had granted a prospecting licence to Rio Tinto Exploration India Private Limited (RTEIPL), an Australian mining giant, to explore diamond mining in the Buxwaha region in the Chhatarpur district. But the project faced strong opposition over ecological concerns at that time too. Later, the RTEIPL decided not to go ahead with the project and exited the project after submitting a prospecting report to the Madhya Pradesh government in 2017.

“Rio Tinto has decided to gift the Bunder diamond project in India to the Government of Madhya Pradesh after a comprehensive review,” said a press statement by Rio Tinto. Rio Tinto Copper & Diamonds chief executive Arnaud Soirat said their “exit from Bunder is the latest example of Rio Tinto streamlining its asset portfolio.”

It had handed over all the associated infrastructure to the government including land, plant, equipment and vehicles. Though Rio Tinto did not specify a clear reason for exit from the project, a team of researchers analysed the reasons in a study, which was published in May 2021.

“We analysed Rio’s exit and suggested that there was not a single reason behind it. Rio might have left because the diamond business was falling around the world and are predicted to fall further as more diamonds are mined in African countries and Russia. To them, the money invested so far is simply not worth the trouble bad press would bring,” said Kuntala Lahiri Dutt, one of the authors of the study and Professor in the Resource, Environment and Development (RE&D) programme in the Crawford School of Public Policy in Canberra-based Australian National University.

In India, Andhra Pradesh, Chhattisgarh and Madhya Pradesh are the three states that produce diamonds. Among them, Madhya Pradesh accounts for about 90 percent of the total diamond resource of the country.

Local sentiments are against the diamond mining project

The project is facing resistance due to ecological concerns and also because the locals fear it would lead to loss of livelihood.

Aniket Dikhit, a resident of the Kasera village, which is one of the closest villages to the mining site, said: “Despite the claims to provide jobs in mining, I feel the project will eat out the livelihood options in the area.”

“Our villagers are dependent on minor forest produce and water for farming. The project involves the diversion of a nullah which is a lifeline for the area. It ensures groundwater level and water for wildlife. I fear this project will lead to groundwater depletion as well,” Aniket Dikhit told Mongabay-India.

The researchers who had analysed the reasons for Rio Tinto’s exit had also counted adverse local sentiment and movements against the project as one of the major reasons.

“It is partly because of local protest of villagers and labours that emerged against Rio and their demands that were also promoted by NGOs that led to litigation in the court, and there were environmental clearances, bureaucratic and legal hurdles that Rio faced and they were asked to do underground mining that would have an increase their cost,” Arnab Roy Chowdhury, one of the authors of the study who works with School of Sociology at the Higher School of Economics (HSE), Moscow, told Mongabay-India.

“At the national level as BJP came to power in 2014 and they started leveraging national capitalist houses, at the same time there were issues of channelling rough stones through particular routes to India, which the government was not happy about. So, Rio’s political patronage within India slowly weakened over time and at the same time the global price of diamond dwindled. Rio has many of its own diamond mines worldwide, so they thought it is best to get out of this scenario. And then as predicted, an Indian corporate house Aditya Birla Group (Essel Mines) received the lease for Bunder mines,” Chowdhury explained.

Environmental concerns against the Bunder project

The Bunder mining project falls under the Bundelkhand region of India, which is a water-stressed area. Environmentalists believe that the huge water requirement for diamond mining would add to the water woes of the region.

However, the Buxwaha region of Chhatarpur district is already declared semi-critical by the Central Ground Water Authority.

Environmental activist Hari Krishna Dwivedi said the “whole Bundelkhand region is facing a water crisis and this forest is essential for the local ecology.”

“Apart from providing livelihood to locals, it also provides shelter to many wildlife species. The forest’s seasonal water streams are a source of groundwater recharge and contribute to Betwa river, a lifeline of Bundelkhand. The project is going to impact all aspects of the environment,” Dwivedi told Mongabay-India.

The Bunder area is a part of the Narmada Valley dry deciduous forest region and has many species of trees and wildlife.

“Forests are severely impacted due to human activities. The people living in the villages of the area are dependent on forests for a minimum of two to four months in a year for their livelihood,” said a survey conducted by Madhya Pradesh Pollution Control Board (MPPCB).

“Among tree species, mahua (Madhuca latifolia) is very prominent and is extensively found around villages. However, the area has a fairly good variety of fauna, including seven species listed in Schedule I of Wild Life (Protection) Act, 1972. These are Indian Gazelle, Chowsingha, Sloth Bear, Leopard, Monitor Lizard, Indian Rumped Vulture and Peacock,” said the survey. 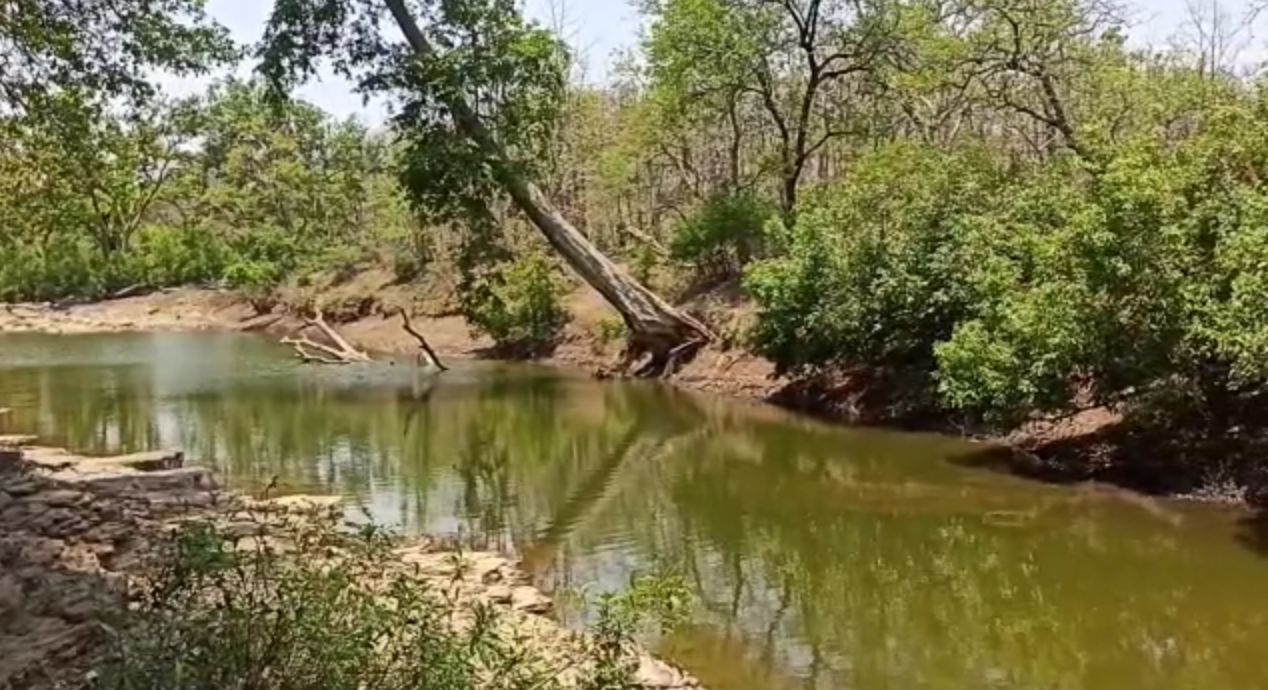 Locals are geared up for a long fight once again

Local people in the area have already expressed apprehensions against the project.

Dwivedi said they had a “long fight with the company (Rio Tinto) on the ground and even in the court.”

“We filed a case against the project in the high court to stop the felling of trees. We secured an interim court order against the cutting of trees by Rio Tinto in the year 2013. We hosted many protests against the project and participated in a public hearing to register our opposition,” said Dwivedi, while adding that they are now gearing up to fight another battle to protect their area.

“After Rio Tinto’s exit, I felt that we have protected the Buxwaha forest from destruction, but the forest is still under threat. I suspect the agencies are hiding the facts about the number of trees supposed to be cut. I suppose it is not just 215,000 trees but it is over 500,000 trees that will be felled for the project. This time the battle is challenging because of COVID-19 restrictions,” Dwivedi emphasised.

Sankalp Jain said  they are regularly trying to spread “awareness among people about the surrounding environment” and are “getting support from locals.”

“Youth are taking part in our online movement as well,” Jain said.

Dwivedi further said due to the pandemic it has become “challenging to go on the ground and educate people about the environmental loss.”

Arnab Roy Chowdhury, however, is sceptical. “The Ken-Betwa River Interlinking project already threatens 23 lakh (2.3 million) trees and 1.9 lakh (190,000) trees have already been cut down for Bundelkhand Expressway Highway. The destruction of flora, mega-fauna (tiger) and human socio-ecological habitat done so blatantly and ‘legally’, shows that it is never about the environment or the people, nobody in power cares about this in current India,” he said.

Mongabay-India reached out to the Essel Mining & Industries Limited (EMIL) to understand their course of action but despite attempts, the queries remained unanswered.

Banner image: A seasonal nallah or stream located near Bunder diamond block. The stream will be diverted by constructing a dam to meet the water requirements of the mining project. Photo by Aman Tiwari.