Global carbon dioxide emissions have resumed their relentless rise after a brief lull due to the disruption caused by COVID-19 in 2020, according to the 16th annual report prepared for the Glasgow climate summit by the Global Carbon Project, a research group. This report has again emphasised that dealing with the worldwide climate challenge is becoming more difficult because of delayed policy action and investments to mitigate and adapt to global warming.

For major emitters such as the United States and the European Union, greenhouse gas emissions in 2021 emissions appear to return to pre-Covid trends of decreasing pollution, states the report. Carbon dioxide emissions are rising again in India, as the South Asian nation scripts an economic recovery amid a receding pandemic. For China, the response to the pandemic has sparked further growth in emissions, pushed by its power and industry sectors, the report said.

Fossil carbon emissions dropped by 5.4 percent in 2020 amid Covid lockdowns across the world, but the new report projects an increase of 4.9 percent in 2021 to 36.4 billion tons. 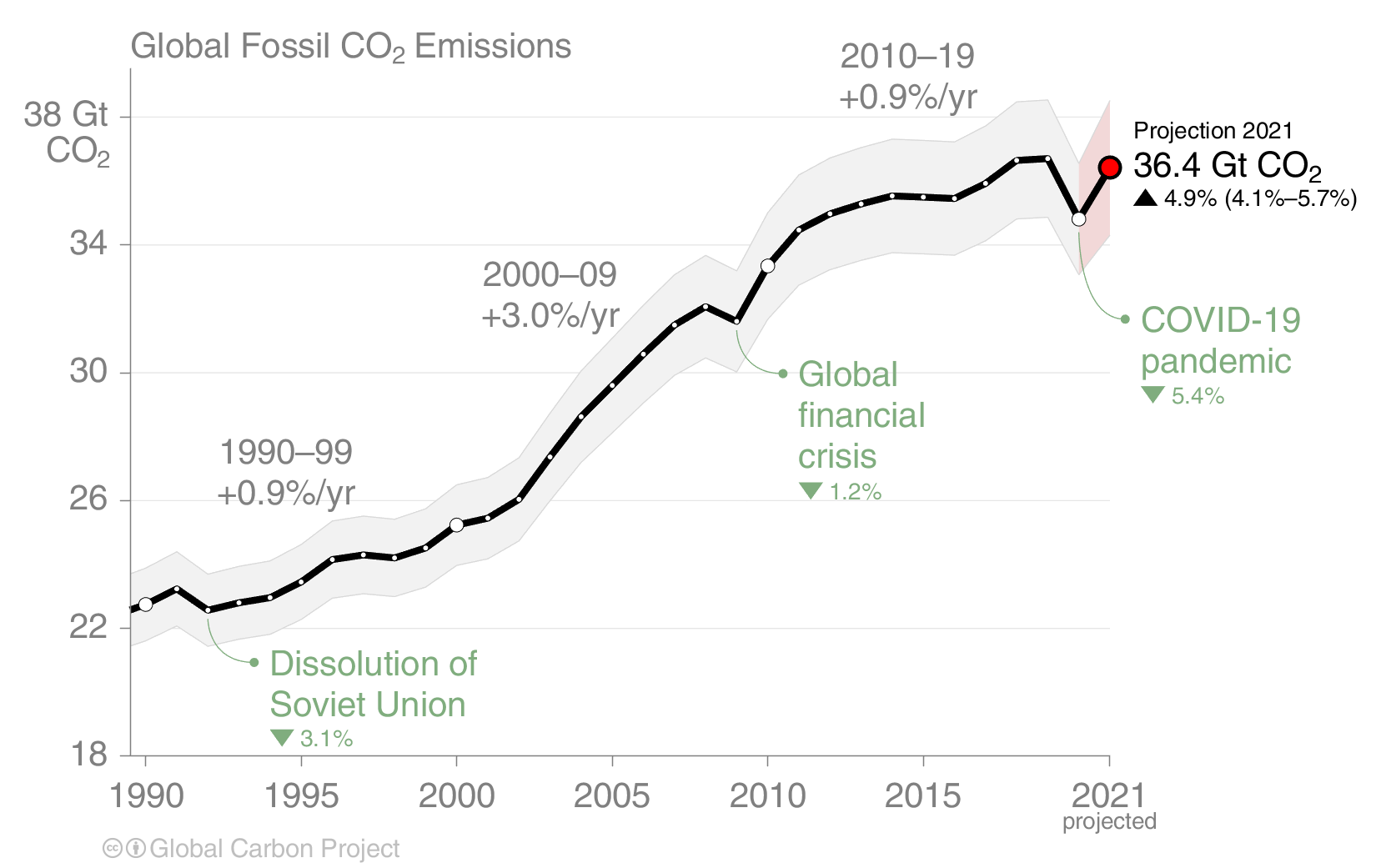 Emissions in India are projected to rise 12.6 percent compared with 2020, the report said, reaching 4.4 percent above 2019 before the pandemic struck. The country may emit a total of 2.7 billion tons of carbon dioxide in 2021, 7 percent of global emissions.

China will account for 31 percent of total emissions, followed by the US at 14 percent and the European Union at 7 percent, the researchers said. In the rest of the world taken as a whole, fossil CO2 emission would remain below 2019 levels, they said. 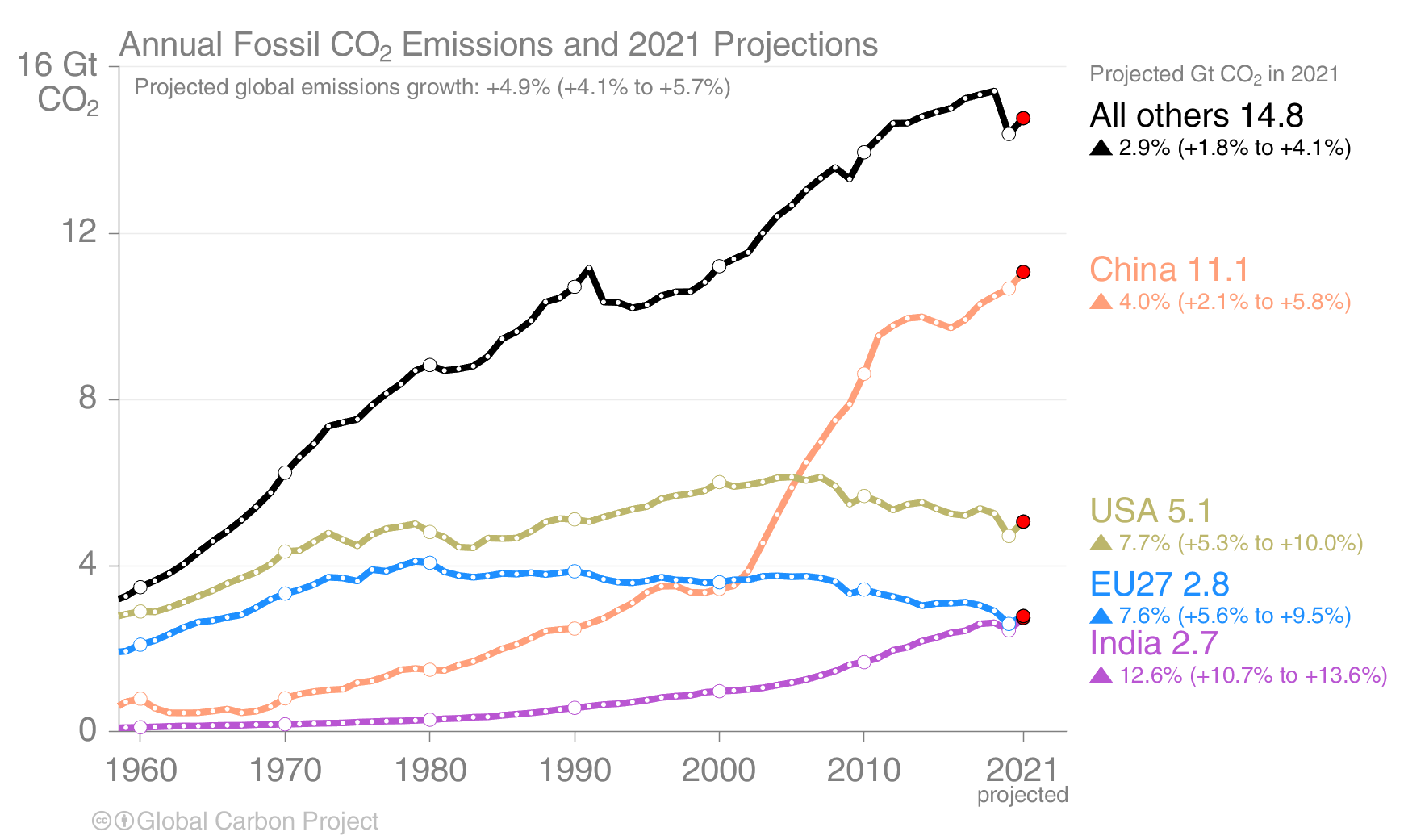 The global carbon budget shows return to a fossil-based economy

This concerning trend reflects the world is returning towards the pre-Covid fossil-based economy, according to Pierre Friedlingstein of the University of Exeter’s Global Systems Institute who led the study. “The rapid rebound in emissions as economies recover from the pandemic reinforces the need for immediate global action on climate change,” Friedlingstein said in a statement.

The researchers did not rule out a further rise in emissions in 2022 if road transport and aviation return to pre-pandemic levels and countries do not reduce the burning of coal. The findings came as world leaders meet in Glasgow at the COP26 conference to address the climate crisis and agree on a plan of action.

To meet the mid-century goal of the Paris Agreement to restrain global temperature rise to 1.5 degrees Celsius compared with pre-industrial times, countries worldwide will now have to cut emissions more aggressively. To have a 50 percent chance of doing that, the researchers estimate the remaining carbon budget has shrunk to 420 billion tonnes, equivalent to 11 years of emissions from the start of 2022.

“Reaching net-zero CO2 emissions by 2050 entails cutting global emissions by about 1.4 billion tons each year on an average,” said Friedlingstein.

The findings are particularly worrying for India, which wants to control emissions without compromising on the economic growth required to lift millions out of poverty.

“The Covid lockdown and economic slowdown is an opportunity for India to start its engine of growth on green energy sources rather than fossil fuels,” said Sanjay Vashist, Director, Climate Action Network South Asia (CANSA). “Successful deployment of solar and wind energy can support accelerated economic recovery while facilitating a just energy transition.”

The findings reinforce India’s position that developing economies must have some carbon space to grow, said a senior official of the environment ministry. “The net-zero declaration by Prime Minister Narendra Modi has made our intentions clear,” he said. “It is now for the developed world to respond responsibly by cutting their emissions faster.”

The shrinking carbon space remains a concern, agreed Ankur Malyan, programme associate at the Council on Energy, Environment and Water (CEEW), a New Delhi-based think tank. The increase in emissions was expected to happen as the world recovered from the Covid pandemic, he said.

Fighting for a shrinking carbon pie is a lost cause, said Bhushan. “But there is a growing pie for which developing countries should fight for,” he pointed out. “It is the global green finance and technology pie.”

There has never been a serious attempt to discuss the division of the carbon pie in international negotiations, he said. “India, the champion of equity and carbon space, will do well to champion the expanding pie of green finance and technology,” said Bhushan. 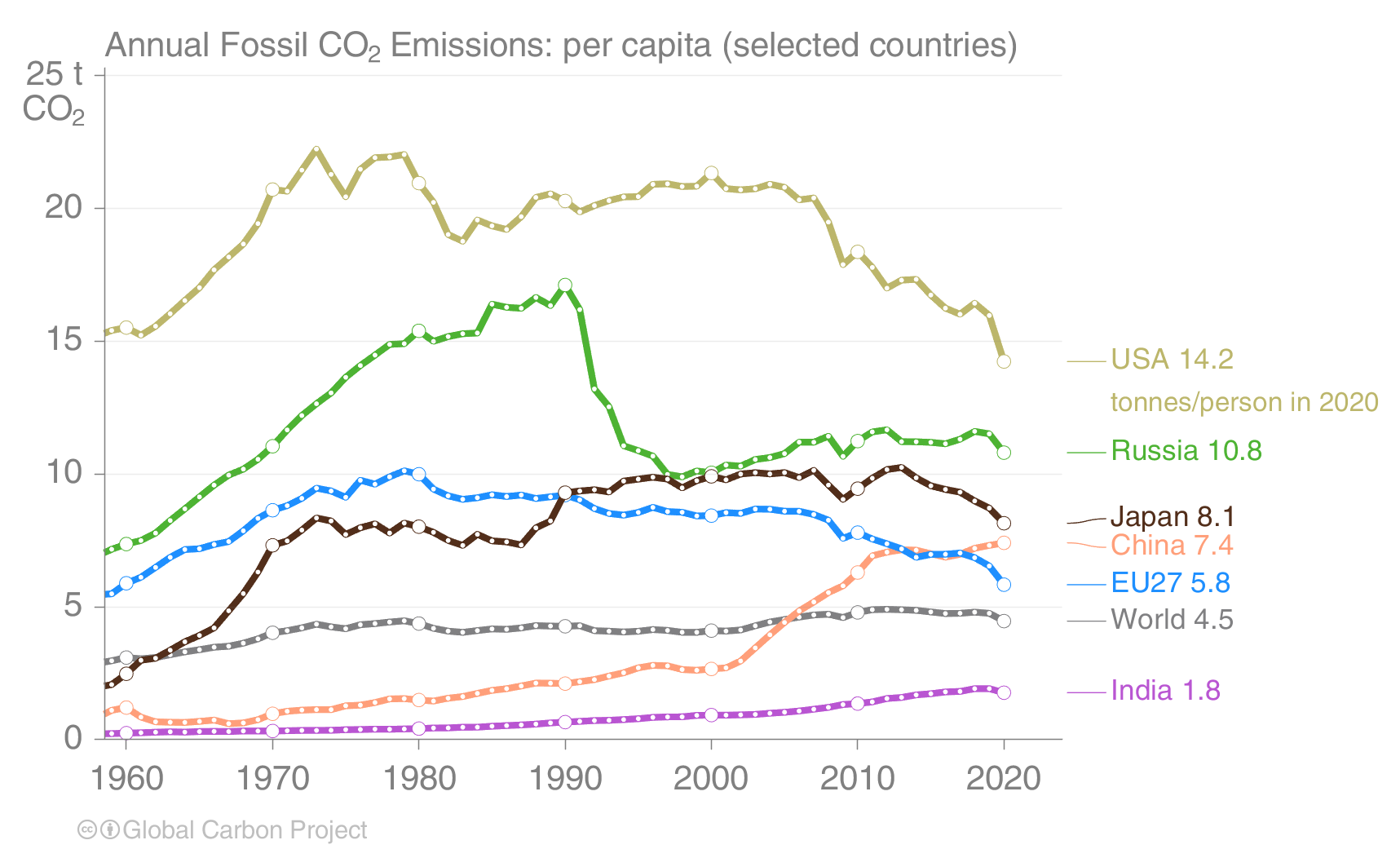 Emissions may rise in short term, but “our new pledge (of net-zero) is a clear signal that we want emissions to decline in the longer term,” said Malyan. “India has always emphasised on the principle of climate equity and justice. Our strong position now gives other developing nations confidence to voice their rights.”

“Developing countries should demand their right to green and sustainable development,” said Bhushan.

In recent times, climate experts have sought to differentiate between different types of emissions, categorized as “luxury and “survival,” which is the difference between emissions from extravagant and wasteful lifestyles and minimal emissions required for subsistence living.

India and other developing nations must keep up the pressure on wealthy nations for increased action on climate mitigation and finance, he said. “India should continue to raise the issue of those impacted by climate change,” Vashist said.

Banner image: A protester near the COP26 venue in Glasgow. Photo by Soumya Sarkar/Mongabay.